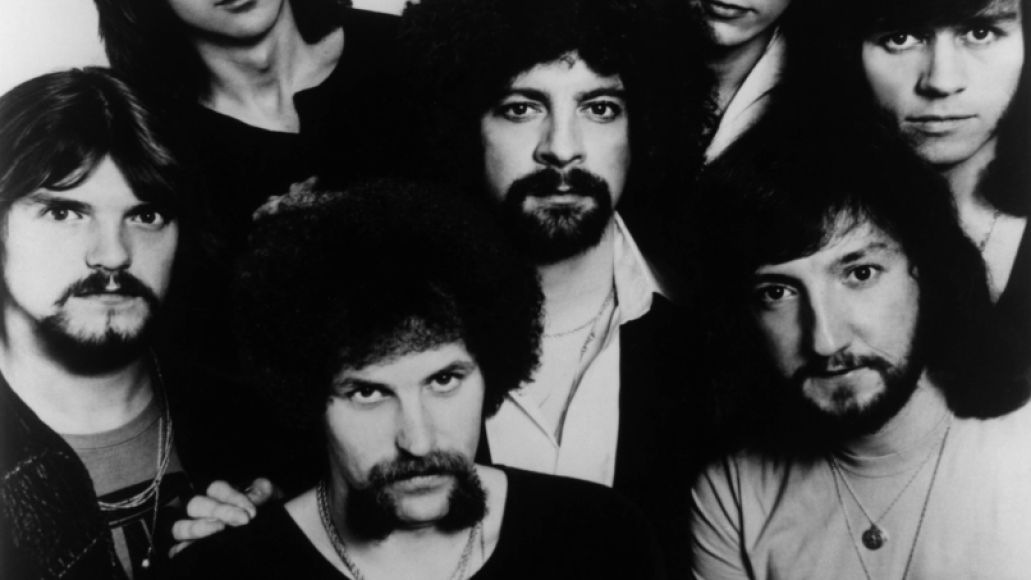 In his review of Alone In the Universe, the first Electric Light Orchestra album in almost 15 years, our own Dan Bogosian correctly pointed out that, even though Jeff Lynne‘s music has become best known for its use in other pop-culture mediums, ELO is also very much an album band. Those two things complement each other more than you’d think.

Sure, Lynne was a hit machine throughout the ’70s and ’80s, but those hits always sounded so colorful and different because they were part of a larger puzzle. While something like “Boy Blue” rides on stadium-sized hooks, what really makes it soar are those strings, a trait that comes entirely from Lynne’s baroque pop and album-oriented sensibilities. It’s the classical thread that ties all of Eldorado (and most of ELO’s discography) together. Those strings wouldn’t be there if the song wasn’t building toward something larger.

So when a director or music supervisor decides to pluck an ELO song from beneath the sonic umbrella of its respective LP, it’s a very bold move. We know Jeff Lynne’s work as soon as we hear it, and we know how different it is from pretty much everything else released during his heyday. That’s why, in the right hands, it can make for something that’s cinematically iconic almost right away. Here are 10 of those best moments—scenes that not only include an ELO song, but are elevated by them as well.

Greg Mottola’s blink-and-miss comedy from four years ago followed Cornetto trilogy co-stars Simon Pegg and Nick Frost as they traveled across America with the titular extraterrestrial. Upon its release, ELO’s feel good jam fueled the film’s trailers, as Jeff Lynne’s sound tends to do, but fortunately, Mottola taped the Xanadu single to the end of his movie, around the time the characters’ road trippin’ comes to an end. It’s not over yet, though, as Lyne insists, “There’s gonna be a party all over the world.” Or at least that’s what Paul would have you believe. –Michael Roffman

Goldmember is easily the worst film of the Austin Powers trilogy, although it does have a handful of memorable comedic moments. One of those is the prison visit between an incarcerated Dr. Evil and Frau Farbissina. Naturally, things start to get conjugal, all to the tune of “Evil Woman”. The Corrections Officer abruptly puts a stop to it, but not before Dr. Evil wags his tongue in perfect sync to the groovy clavinet riff. —Dan Caffrey

It’s a little hard to hear over the heaping and the hollering, but when the four teenage members of Mystery are losing their shit in the elevator leading up to Simple Simon and what might be their second chance at KISS tickets, you can slightly hear ELO’s string-wrapped pop ditty, “Turn to Stone”, over the PA. It’s admittedly a needle in the film’s ’70s rock ‘n’ roll haystack, but hey, it was an excuse to write about Adam Rifkin’s oft-forgotten Detroit Rock City, which hopefully remains a staple of every male teenager’s rockist fantasy film collection. By the way, give me back my fucking drumsticks … please. –Michael Roffman

If a gangster film is set in the ’70s, there’s bound to be a nightclub scene, which means the director gets to juxtapose some shady crime dealings with glitzy disco music. Brian De Palma did it in Carlito’s Way with “Rock the Boat”, “That’s the Way I Like It”, and many others. For Donnie Brasco, director Mike Newell turned to “Don’t Bring Me Down” to foreshadow the death of caporegime Sonny Red (Robert Miano), who meets his eventual killer, Sonny Black (Michael Madsen), at Richie’s club while the closing track to ELO’s Discovery chugs in the background. There will always be something chilling about cheery music underscoring sinister intentions, plus the song title subtly points to Red getting overthrown. —Dan Caffrey

Jeff Lynne is all over David O. Russell’s 2013 ensemble comedy — and for good reason. In a past interview with The Huffington Post, the film’s music supervisor Susan Jacobs explained, “What David likes in music, and what he responds to also in dialogue, is contrast. All those songs have a lot of contrast: very beautiful, very edgy, a lot of tempo, a lot of heart.” Of his three songs used in American Hustle, “10538 Overture” stands tall above “Long Black Road” and Lynne’s then-unreleased track, “Stream of Stars”. The 1972 single, which marked ELO’s first, not only sold audiences on the movie for its use in the trailers (again, it’s really a hallmark of the band), but also served as the film’s closing anthem, wrapping things up with a classy swagger not unlike something out of Goodfellas. Keyword: classy –Michael Roffman

In film, ELO songs are often used for comedic effect, but they can also be downright enchanting. For proof, look no further than Sofia Coppola’s The Virgin Suicides, where “Strange Magic” plays at a Midwestern homecoming dance to sprinkle the entire gym with stardust. While much of the rest of the movie is tragic, Lynne’s music gives the Lisbon sisters a brief respite from their smothered, sheltered existence, creating a high-school dreamscape that becomes a watershed moment in their all too short lives. Even Josh Hartnett’s ’70s heartthrob Trip Fontaine, who lives much longer than they do, remembers the dance as something to aspire to. —Dan Caffrey

Eternal Sunshine of the Spotless Mind (2004)

When coming up with this list, “Mr. Blue Sky” was one of the first songs that jumped to mind. Upon re-watching Michel Gondry‘s Eternal Sunshine of the Spotless Mind, however, it became clear that it’s not actually used in the film. No matter. ELO’s bounciest hit still served as an unofficial theme for screenwriter Charlie Kaufman’s thesis on romantic memory (and amnesia), its jaunty piano propelling each of the film’s trailers and reminding us of how distant, fuzzy, forgetful, unforgettable, painful, and infectious love can be. There’s a reason it got included on the official soundtrack album. —Dan Caffrey

Dirk Diggler’s cock hasn’t aged well. That’s not a knock against Boogie Nights (it clocked in at number one on our Ranking + Dissected of P.T. Anderson’s films)—just its famous prosthetic. But the appendage’s rubbery texture, lack of definition, and painted-on blue veins don’t matter once Diggler zips up and “Livin’ Thing” starts playing, for at that moment—when the strings move from sustained notes into full-on chamber pop and the credits roll—we believe in the cock and we believe in its final victory, even if it’s merely a return to Diggler’s surrogate family and the industry that made him famous. Without “Livin’ Thing”, Boogie Nights‘ ending just wouldn’t feel as triumphant. —Dan Caffrey

I’m going to go out on a limb and say there isn’t a better song by Electric Light Orchestra than “Showdown”. I’ll go one further and also suggest that there isn’t a better film by the Farrelly brothers than Kingpin. The way Lynne pines over those urgent strings, those funky rhythms, and especially that strangled guitar solo that comes in around the two-minute warning boils down to a pained understanding that whatever’s going to go down is a do or die situation.

Now, apply that logic to Woody Harrelson’s tragic, one-handed bowler, Roy Munson, and you have what we like to call “a perfect marriage.” Here’s a guy who’s been mired for so long, whose golden future has been paved over in rust, and the song crashes in right as he’s about to go head to head with the man that put him there. Kingpin is billed as a raunchy comedy, but man, a moment like that makes the film bigger than it ever needed to be. –Michael Roffman