If you’re a Chicagoan who loves live music, you’ve likely been to a show put on by leading concert promoter JAM Productions. They own three popular venues in the Windy City: the Riviera Theatre, the Vic Theatre, and Park West. In the last year alone, they’ve brought acts like AC/DC, The Replacements, The Jesus and Mary Chain, and My Morning Jacket to Chicago audiences.

Band after band performs at these well-loved venues, but there’s rarely much thought given to the folks who make the shows happen, particularly stagehands whose work goes mostly unseen by the crowd. Someone’s got to do the hard work of helping musicians load out and in, rigging the stage lights, and setting up gear onstage. Often, stagehands do the same backbreaking work day in and day out for years – if not decades. 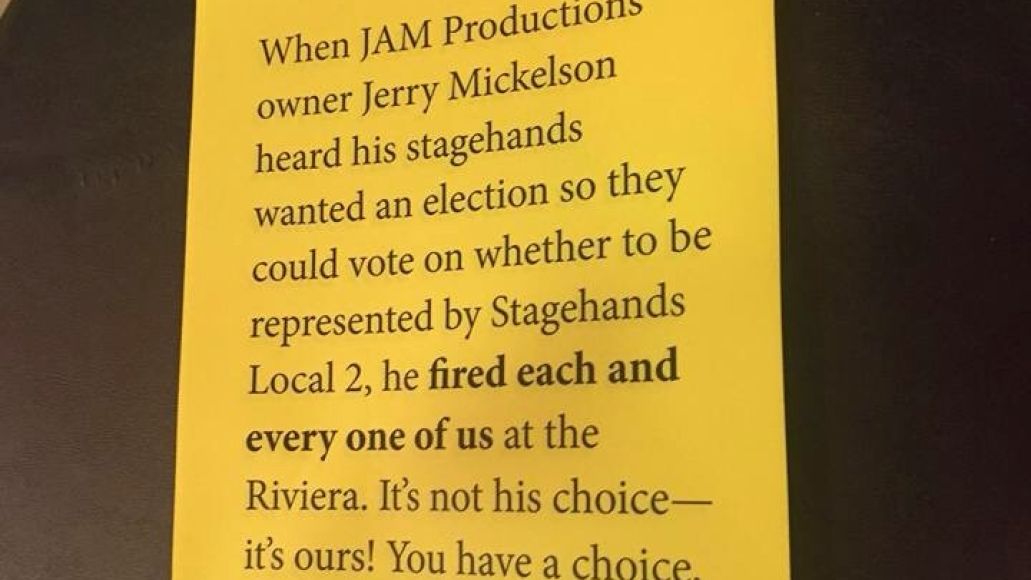 On October 20th, these stagehands were suddenly pushed into the spotlight. A photographed flyer circulating on Reddit alleged that JAM Productions owner Jerry Mickelson had fired all the stagehands at the Riviera Theatre because they wanted to vote on unionization. The flyer, which had been handed out to passersby outside one of the three JAM venues, read:

“When JAM Productions owner Jerry Mickelson heard his stagehands wanted an election so they could vote on whether to be represented by Stagehands Local 2, he fired each and every one of us at the Riviera. It’s not his choice – it’s ours! You have a choice, too – don’t patronize the Riviera, Vic, or Park West until JAM hires us back.”

As the Reddit comment thread swelled, JAM categorically denied the allegations to upset fans on social media, but made no official statement. The union in question, the International Alliance of Theatrical Stage Employees (IATSE) Local 2 of Chicago, released a statement revealing that Mickelson had illegally dismissed more than 30 employees at the Riviera “in a profanity-laced tirade” after discovering that the stagehands wanted to vote on unionization. According to the statement, “The stage crew was told to clear out their tools and equipment from the Riviera before the locks were changed. Some of these stagehands had worked for JAM for decades and thought of JAM as a family.”

Consequence of Sound spoke with two stagehands fired by JAM Productions to find out more about the move towards unionization, how they were fired, and what lies ahead for them. 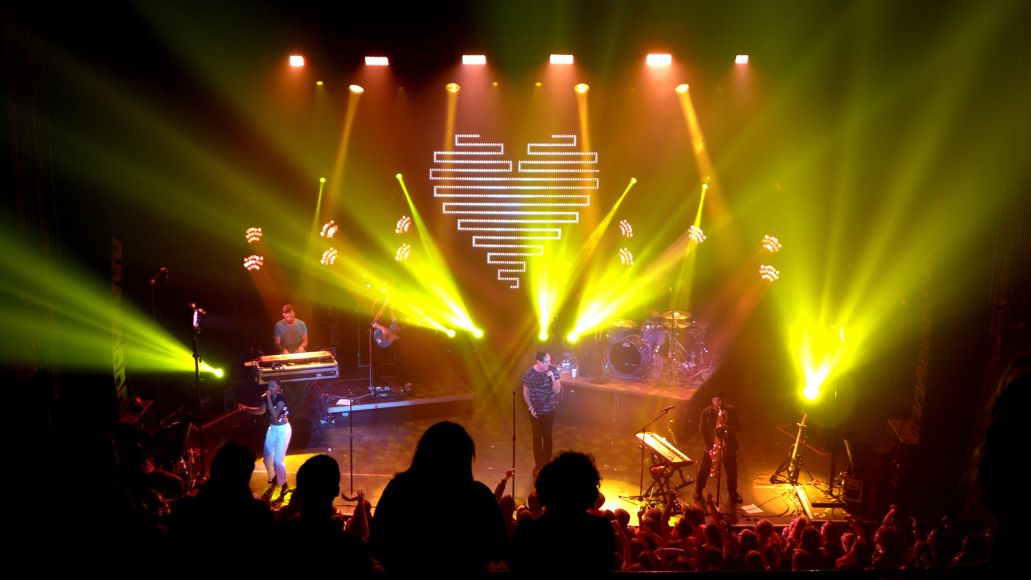 The union-organizing drive began in June when a group of seven stagehands met with representatives of Local 2 to find out more about unionization. According to Justin Huffman, who has worked as a stagehand for 15 years and with JAM for at least a decade, the stage crew had discussed joining the union over the years, but not seriously. But as their wages stayed the same against rising costs of living, the stagehands stayed open to the possibility of organizing.

“We hadn’t had a raise in 10 years. I mean, I can’t even remember. It’s been that long,” says Huffman, who cites stagnant wages as the stagehands’ most significant dissatisfaction with JAM. (At a protest outside JAM’s headquarters on Wednesday, former stage production manager and industry veteran Jolly Roger said that the stagehands had not received raises in at least seven years. Roger himself had not seen a raise for the last 15 years he worked for JAM, reported DNAinfo Chicago.)

“In that time, we’ve seen food and fuel prices just escalate continually, and obviously the cost of living has gone up, especially in Chicago,” says Huffman. “I would venture to say ticket prices have gone up, but our salaries have not. They’ve stayed the same.” 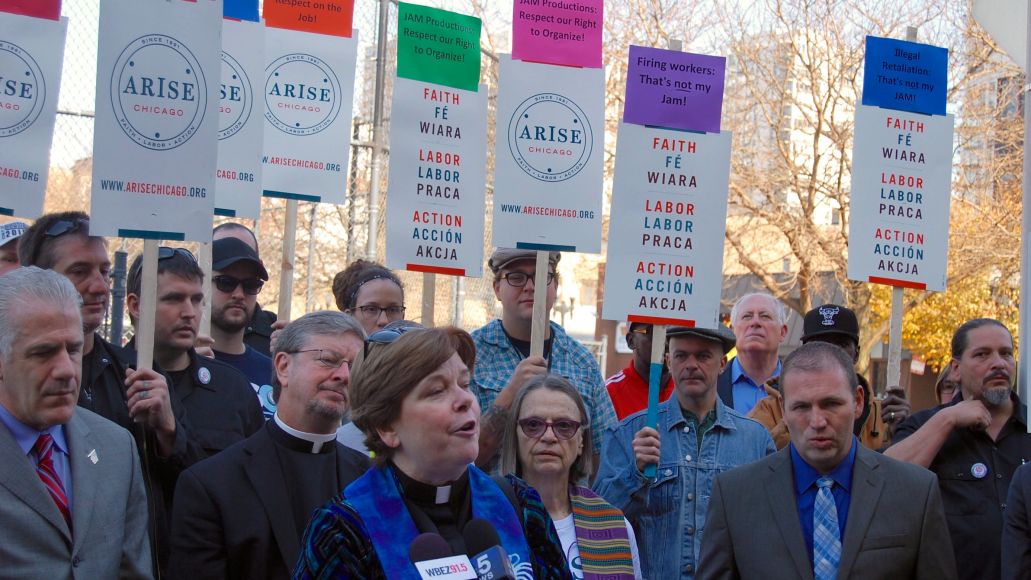 Growing frustration over a lack of overtime pay also played a part, says Paul Repar, who has worked as a stagehand since 1994 and at the Riviera since 1996. Stagehands could work 16 to 20 hours a day on a show, but they would only receive overtime pay if they worked more than 40 hours a week, which was “very rare.”

“There’s a lot of times that we don’t make it to that point because shows are sporadic,” adds Repar. “There might be two shows one week, one show the next week, sometimes three the following week. It just varies.”

At the Wednesday protest, Roger also said that stagehands were asked to perform tasks that risked their health and safety and were not allowed to negotiate for health insurance, according to DNAinfo Chicago.

Between late August and early September, the seven stagehands decided to put unionization to a wider vote in an election held by the National Labor Relations Board (NLRB) after dwelling on it over the summer. Huffman was persuaded by the prospect of different advantages of being in a union that could “make our lives a little better.”

“They can offer health benefits, pension funds, things of that nature,” he says. “It seemed possible just because it was in our legal rights to go on this matter. It seemed like something, given the choice, that I’d love to take advantage of.”

For Repar, the main draw of unionization was the greater access stagehands would have to work opportunities across the city. “We were limited on shows that we worked as far as JAM goes,” he explains, “whereas the union is more open in the city to work more venues.” More work opportunities at different venues and events would help stagehands tide over the slower concert season, which usually comes after January 1st, he explains. 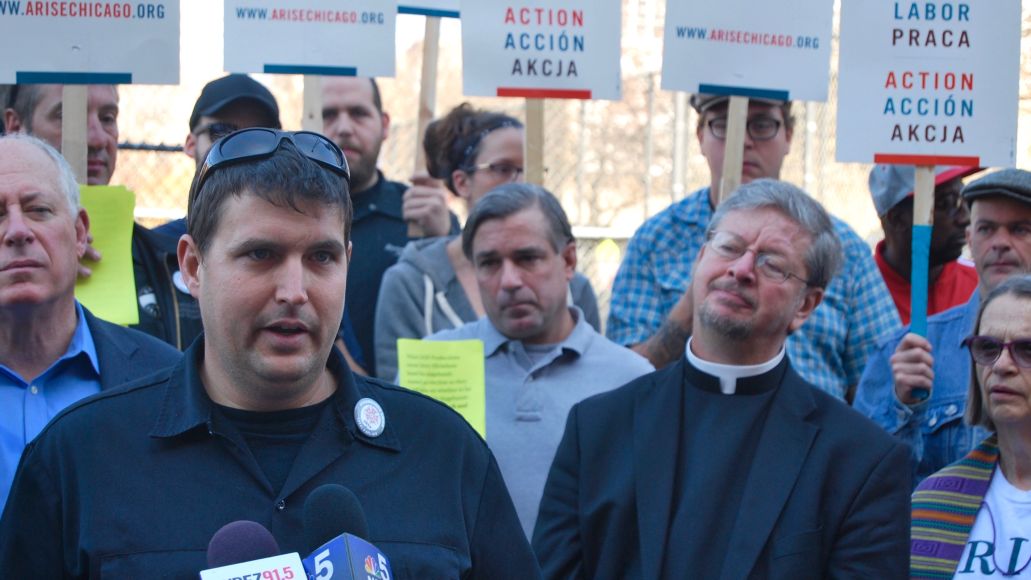 As talk of unionizing spread beyond the initial group of seven stagehands, JAM owner Jerry Mickelson caught wind of the organizing drive. On September 16th, Mickelson told Roger over the phone that the entire crew of more than 30 stagehands were fired effective September 21st. According to Repar, the only reason given for the dismissal was that JAM was “going in a different direction.” The last Riviera show many of the stagehands worked was the Stromae and Jidenna concert on September 21st.

Firing workers as retaliation against labor organizing is illegal under the National Labor Relations Act passed in 1935, which guarantees workers the right to self-organization and unionization.

“I was surprised – I didn’t think they would fire us like they did,” says Huffman. “But on the other hand, I guess I wasn’t surprised, because it just seemed like something that they’re capable of.”

Neither was Repar, who says that, in the past, stagehands had avoided raising these concerns to JAM for fear of being fired. “A lot of those people from JAM didn’t know our names to begin with,” says Repar. “They didn’t really know who we were. We pretty much knew that if we talked to them we probably would be fired if we asked for benefits or any type of raise … That side of the company just seemed like they didn’t really care about us anyway.”

Still, the mass firing stung because the stagehands “didn’t want to take JAM to the cleaners,” admits Repar. Their main concerns were being protected and receiving health benefits.

“We didn’t want to scare any of the shows out of there,” Repar adds. “We wanted to keep shows coming in there and work with them, not against them. They never gave us the opportunity to negotiate anything. They just fired everybody.” 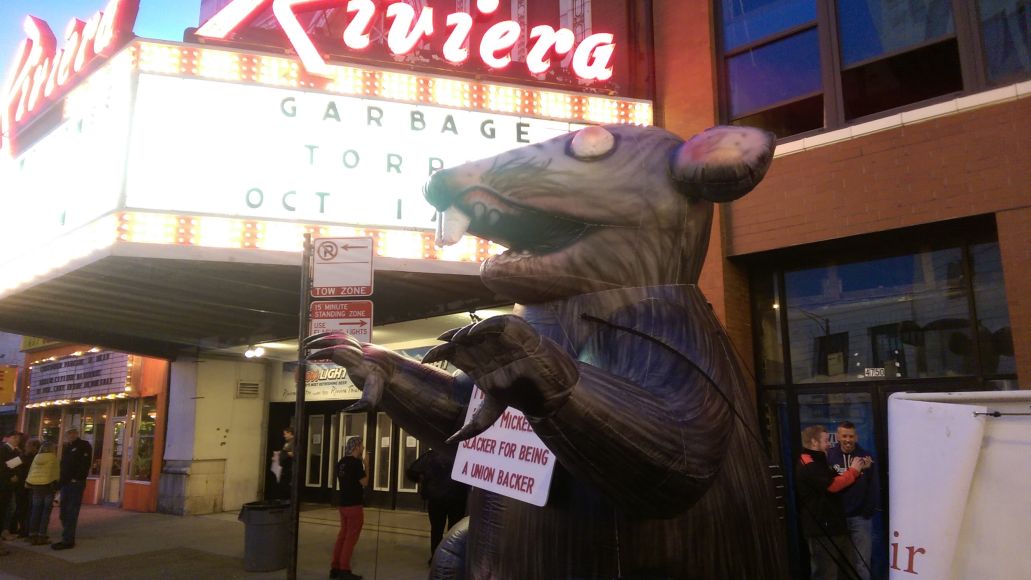 As the NLRB carries out their investigation, an inflatable rat, the popular union protest symbol, has been making the rounds outside JAM venues. It was spotted outside the Nate Ruess show at the Vic on October 15th and outside Garbage’s 20 Years Queer show at the Riviera two days later.

According to the Chicago Reader, it has now been dubbed Stinky the Riv Rat and accompanied about 40 stagehands and union members at yesterday’s protest outside JAM’s headquarters on 207 W. Goethe Street. Roger and Huffman spoke out against the unfair pay and working conditions they experienced as JAM employees. They were joined by a numerous supporters: Local 2, interfaith labor organization Arise Chicago, members of the clergy, the Chicago Federation of Labor, and even former governor Pat Quinn.

“I think it’s very important that JAM and their president, Jerry Mickelson, come to their senses,” says Quinn. “Hardworking people deserve an opportunity to organize. The right to organize is fundamental in our American democracy.”

The fired stagehands have been relying on freelance work at other venues and events to stay afloat, but losing their jobs at JAM during the busy fall concert season has hit them hard.

“We relied on the fall season to get us through the winter,” Huffman explains. “It’s really a kind of feast-or-famine situation. Typically you get everything in the fall because, inevitably, it’s going to slow down after New Year’s. So no, I wouldn’t say we’re all just fine. We’ll make it work, I guess, but we’re certainly hurting in some ways.” 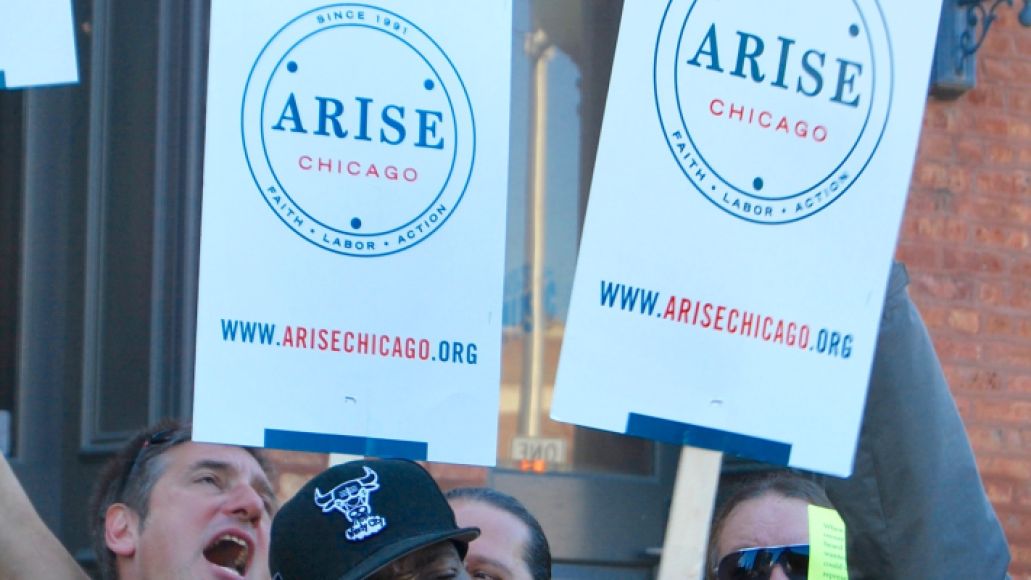 As for JAM, Mickelson told Consequence of Sound that he would not publicly comment on the matter “while it is in front of the NLRB.” He would only say, “Please remember there are two sides to every story.”

To that, Huffman says, “There’s two sides to every story – that’s accurate, I suppose. It doesn’t make that side of the story correct or morally correct.” For Repar, it is more clear-cut: “There is one side to the story: they fired us illegally, for no reason. That’s the only side of the story. If they have something else apart from that, it will be a surprise to me.”

Looking back on the firing weeks after, Huffman and Repar express disappointment and cautious optimism, but most of all a desire to get their jobs back.

“That was our venue that we worked at for the longest time,” Repar concludes. “A lot of people put a lot of sweat and hard work into making a good show happen so that patrons can enjoy themselves at that venue … we were comfortable working there. Everybody enjoyed working there. It was a workplace, but it was also our home.”