“So many things to say, so unconfident in my ability to say them.”

That was the line that La Dispute frontperson Jordan Dreyer repeated twice during the band’s headlining set on Friday night at the El Rey Theatre in Los Angeles. If you’d been online or watched any TV during the preceding day, it wasn’t hard to make the leap as to what he was referring. Hours earlier, 87 people died at a different rock concert in a different city, people not unlike those at the La Dispute show, out on a Friday night, wanting to be among like-minded folks while they experience songs that they love at a maximum volume.

So often, we talk about the ideas of inclusion and safe spaces for live music. Usually, this is in reference to anyone, regardless of gender or sexual preference or physical abilities, being able to experience the same live music as everybody else. At punk and hardcore shows, this idea becomes particularly important because of how rough it can get. When people mosh, they need to be picked up when they fall. When they stagedive, they need to be caught. When they crowd surf, it’s everyone else’s arms that hold them up.

Maybe this is why the Eagles of Death Metal masacre feels like such a violation, because the last thing you should be doing at a concert is looking over your shoulder in fear. These are supposed to be our safe spaces, and we fight hard to keep them like that. And this is also what made the act of going out on Friday in spite of what happened feel more important than a typical night out, people unwilling to let terrorists win by frightening us away from shows and public spaces. People continuing to live lives the way they want. 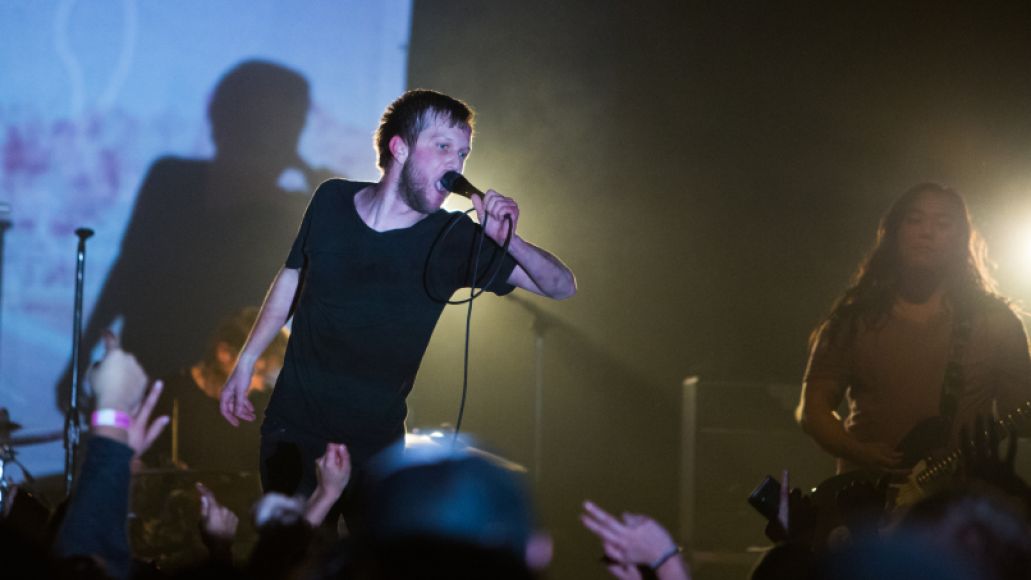 “So many things to say, so unconfident in my ability to say them,” Dreyer said before giving it his best attempt. He said what you’d expect, that his thoughts and all of ours were with the people of Paris, and he also hit on a key reminder. “There is so much hate in the world, and it can feel insurmountable,” he said, “but there is so much love in the world, too.”

Dreyer reminded the audience to take care of each other, and a short time later, the audience enacted a symbol of exactly what he meant. While Dreyer stood on the audience barricade during “Edward Benz, 27 Times”, a crowd surfer emerged in the middle of the audience and made his way towards the stage. Dreyer motioned for the fan to be guided his way, and as Dreyer sang the line “I’m reaching for no one,” the two were brought together in an embrace. It was a moment that reminded us of everything a concert can be on a day that reminded us of everything a concert shouldn’t be. And when Dreyer would repeatedly dedicate songs, thank the audience for coming out, and pay tribute to his opening act, Envy, nothing was taken for granted. That we gather together, that we are safe, and that we take care of each other while we listen to live music … it all felt more like a privilege than ever.

Setlist:
A Departure
For Mayor in Splitsville
King Park
Scenes from Highways 1981-2009
I See Everything
Woman (In Mirror)
HUDSONVILLE, MI 1956
35
Edward Benz, 27 Times
THE CHILD WE LOST 1963
Edit Your Hometown
First Reactions After Falling Through the Ice
Sad Prayers for Guilty Bodies
Fall Down, Never Get Back Up Again
Woman (Reading)
Encore:
You and I in Unison
Said the King to the River