Few may have predicted that in 2015 the heady electronics of Daniel Lopatin’s Oneohtrix Point Never would have more in common with Nine Inch Nails than Squarepusher, but thanks to a surprising supporting slot for the former, it’s become fact.

Heavily inspired by the 2014 run, which saw Lopatin performing solo sets of what he calls “Cyberdrone” while opening the group’s co-headlining amphitheater jaunt with Soundgarden, the avant-garde producer managed to channel the raging distortion of that tour’s elder statesmen — his admitted teenage hero — into something decidedly his own for his latest offering, Garden of Delete. Suitably, he continues to explore this newfound territory in the live setting, as seen at the Regent Theatre in downtown Los Angeles on Saturday night. 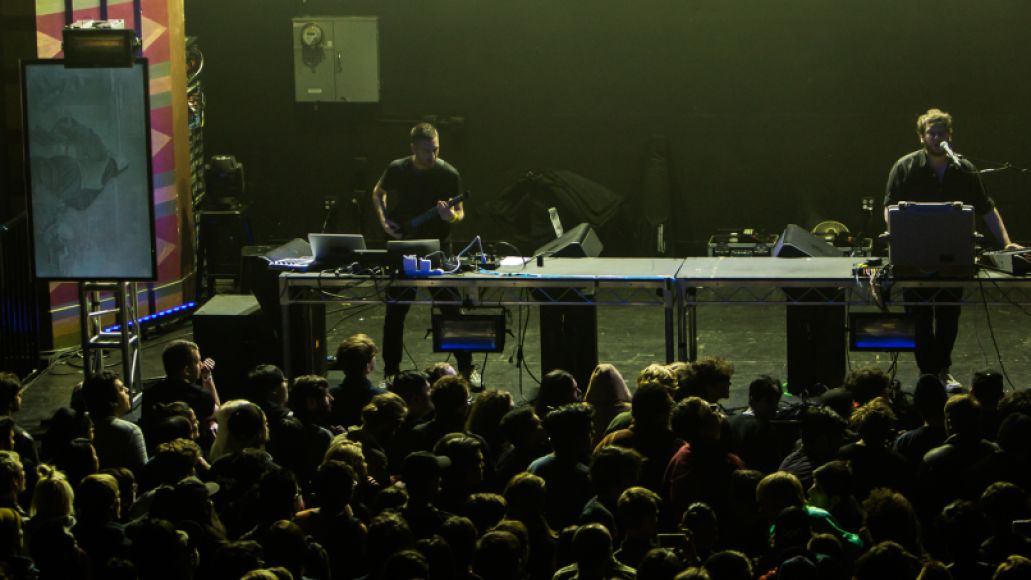 No longer a lone entity, this incarnation of 0PN sees the project’s presentation expand to incorporate longtime visual collaborator Nate Boyce on guitars (on top of his usual duties) while Lopatin summons the heavily effected tracks of his latest LP to life from behind a bevy of laptops. Flanked by only a pair of hanging flat-screen televisions (perhaps a subtle commentary on society’s predilection for receiving information through such portals), the duo’s DIY presentation pushed out a seemingly endless assault of disturbing lyrics, abstract digital design, and occasional internet nods in conjunction with a set that capitalized heavily on the strong sonics of the producer’s new album.

Battling the Regent’s uncanny ability to suck the life from any set, the notably large room for a pair of experimental noise makers was bathed only in a dim blue and peppered with violent strobes as the set kicked off with Lopatin’s latest pair of singles, “I Bite Through It” and “Sticky Drama”. Guided only by the barely human, vocoded vocals of the producer, the hour-long set was careful to never veer full-on into nu-metal territory, though that fact was seemingly lost on a crowd eager to mosh to the torrentially oppressive and cycling synths of GoD stand-out “Mutant Standard”. And despite a largely subdued and focused presence, Lopatin himself even managed to crack a smile as one fan’s “fuck yeah!” rang out between tracks, prompting alien-like banter from the producer via his heavily effected mic. 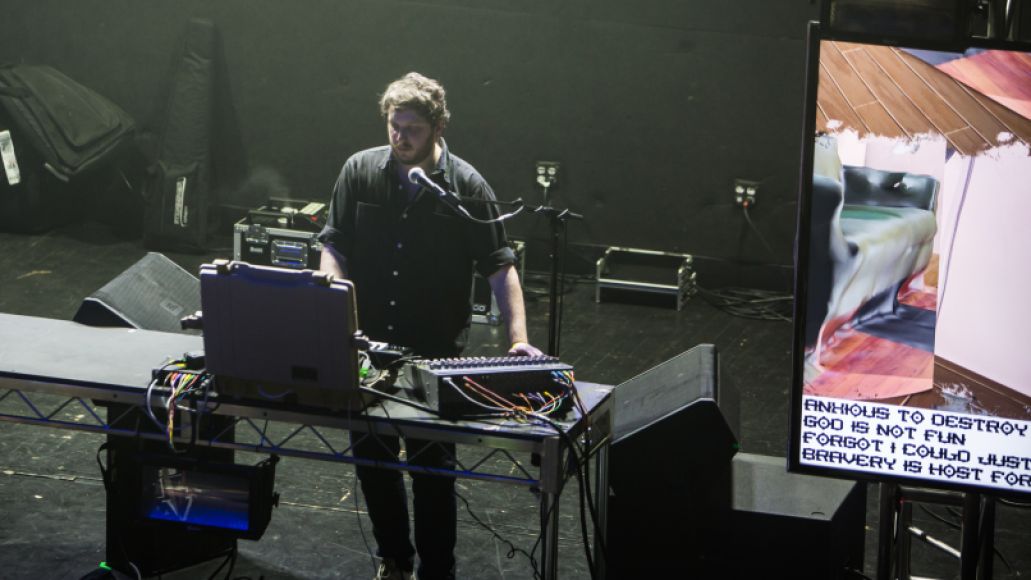 With a near sold-out venue hanging on every word, and respectfully transfixed throughout the set’s duration, Lopatin’s creations present a strong antithesis to society’s current obsession with immediacy, proving that when done right (and to the level of intricate perfection as the rest of his catalog), attention spans are as large or small as the journey on which they’re taken. In Lopatin’s case, he’s built an entire world for his audience around the music of Garden of Delete, and fans are more than ready to be given the full tour.

Worth pointing out, though, is that like much electronic music, it’s often difficult to discern just what Lopatin is up to amidst most of his time onstage (one imagines him just as likely surfing 4chan as actually performing), though it’s easy to side with him in large part thanks to the quality of his current material, which lands him squarely among the Warp elite and IDM’s biggest heroes. Returning for a brief encore following the final notes of the performance, the aggressive tones of the set’s majority were shed for an angelic bathing in soft chords. A cleansing before release. Perhaps a subtle reminder that even in these strange times, there’s still room for peace in the Garden of Delete.