Perception is a powerful thing that often trumps reality. What we think of artists and the music they leave behind typically overshadows what’s actually there. It’s human nature, really. We’ll laud and celebrate our favorite records to no end. The not so great ones? Best to not speak about them or, in some cases, acknowledge that they ever happened.

Today, there are few bands whose legacy can stand next to that of The Clash. Theirs is one that boasts some of the finest records in rock history, and many of those albums have their own role or character to play in the band’s narrative.The Clash is more or less the English punk playbook, defining not only the sound of a then-burgeoning genre but also the spirit of the movement. London Calling is the masterpiece, the singular document that will outlive us all in countless magazine and web blog “greatest records” lists. Sandanista! is the outlaw, the rebel son that won’t conform to other people’s expectations. Combat Rock is the cool kid, the crossover record complete with a small handful of the band’s biggest singles.

For years, this is where we’ve left things with The Clash. Any discussion of the band’s place in the annals of pop music history rounds all of these bases, with some ancillary discussion about Mick Jones’ work in Big Audio Dynamite and Strummer’s solo stuff with the Mescaleros thrown in for good measure. These are the songs and records that we talk about because they represent the version of The Clash that we want to remember. Admittedly, it’s 95 percent of the full story, which brings us to the remaining five percent.

Rounding out The Clash’s narrative is Cut the Crap, the black sheep brother-in-law who comes to town for seemingly no other reason than to raise hell in paradise. Think of it as John Candy in Uncle Buck, only with a weird taste for ’80s electronic music. It’s the lone, immoveable stain on The Clash resume that all the soap and elbow grease in the world can’t remove. I know it’s not easy to look failure in the eye, Clash fans, but haven’t we been silent long enough? After 30 years, hasn’t enough time passed for us to talk our way through this and acknowledge the sonic elephant in the room? I’m happy to be the one to jump on the grenade and start the conversation, but I need you all to say it with me: CUT THE CRAP ISN’T JUST THE WORST CLASH RECORD BY A MILE. IT’S ONE OF THE WORST RECORDS IN POP MUSIC HISTORY.

That sounds like a claim with the words “hot take” written all over it, but the truth is anyone who has listened to The Clash’s final record is hard-pressed to argue otherwise. Plainly put, it just doesn’t work, and there are but a few scattered redeeming moments on it. Whereas everything before it was rock solid and cocksure, Cut the Crap is full of half-baked ideas. If London Calling was the work of a cool, confident, and musically fearless band operating at the peak of its powers, then The Clash’s swan song is the work of a veteran band with a severe case of identity crisis. Considering barely five years stood between the two records that represented those extremes, the fall from grace is staggering.

We can talk about all the ways it wildly misses the mark, from the muddled album opener, “Dictator”, to the aimless, flavorless dance punk of “Cool Under Heat” or the mock bravado of “We Are The Clash”, which, despite its title, is clearly the work of a band straining to arrive at the 77 punk sound that once came so naturally. But for all of its flaws, there’s something weirdly fascinating about just how bad of a record it is. There’s little use standing up for the songs themselves, but the story behind Cut the Crap is interesting, a sorted tale of egos, frustration, and questionable artistic decisions run amuck. How did things go so wrong? 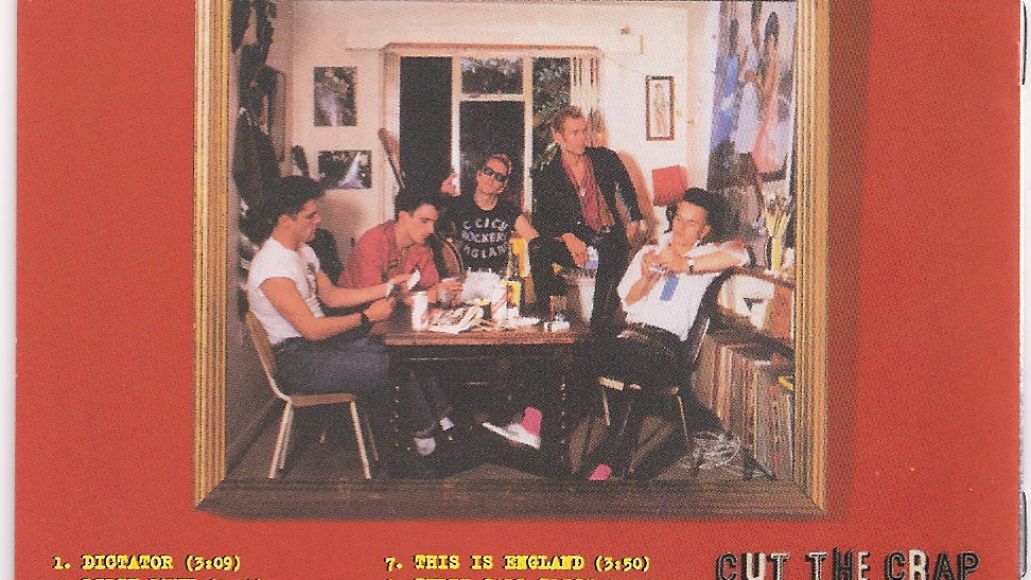 As history tells it, the story of The Clash’s demise is in many respects a pretty common tale. Joe Strummer and Mick Jones were always competitive with one another, but the rivalry that once fueled the band’s creative engine had by 1985 driven a sharp wedge between them. Tensions came to a head prior to the writing and recording of Cut the Crap, which ultimately led to Strummer and bassist Paul Simonon handing Jones his walking papers. Strummer is still universally recognized as the figurehead of The Clash, but if there was any doubt about Jones’ role in shaping the band’s sound, his absence on Cut the Crap more or less put a lid on it. Pete Howard was hired on drums, and Vince White and Nick Sheppard were brought in on guitar, but Strummer was just rearranging deck chairs on the Titanic. Without Jones, who would also try his hand at synth and electronic music with better results on Big Audio Dynamite’s debut later that same year, there was nowhere for Cut the Crap to go but down.

The story of a creative partnership deteriorating is nothing new, but one of the more curious wrinkles in the Cut the Crap story is the role the band’s manager played in putting the record together. With Jones gone, Bernie Rhodes penned most of the album with Strummer. On the surface, there was reason to suspect the pairing would work. Rhodes had a production background, and having also managed the Sex Pistols and The Specials, he wasn’t a stranger to the punk side of life. But the partnership put a chain of bizarre events in motion.

Despite having Howard on board as a drummer for the sessions, Rhodes opted for a drum machine on most of the record’s 12 tracks. Sonically, this is the record’s most glaring flaw. There are more than a few tracks on the record that have the makings of good Clash songs. “Dirty Punk”‘s buzzsaw guitars and three-chord simplicity sound like a welcome retreat back to the band’s roots, and “This Is England” shows how good The Clash had gotten at crafting pop songs in recent years. But the drum machines sucked the raw energy and life out of the record’s few bright spots, steering the songs closer to a formulaic ’80s synth rock that sounds like the kind of stuff the band once openly rallied against. The record also took a nosedive lyrically. Billed by many as “the only band that matters,” the band traded in its once razor-sharp sociopolitical barbs for mindless, pandering drivel. “This finger points gonna pop tonight,” Strummer sings on the soulless “Fingerpoppin”. “Gonna point at the best girl in sight.” Not exactly “London’s Burning” or “Hate and War”, is it?

Strummer initially approached Cut the Crap as a brash return to form for the band, but instead it was an awkward mash-up of classic and contemporary. This was The Clash, but only in name. Rhodes also reportedly changed the name of the record to Cut the Crap in the 11th hour from its original title, Out of Control, but no matter. Either title feels almost too on the nose.

Amazingly, whatever fallout came from Cut the Crap was short lived. Strummer picked up the pieces relatively quickly, and fans welcomed his return back to the Clash-like sounds showcased on his 1989 solo debut, Earthquake Weather. Jones, as mentioned, gave Big Audio Dynamite a good run into the ’90s. In the end, maybe The Clash left behind too many treasurable musical moments to justify sulking over its rare misfires, even one as spectacularly ill-advised as its sixth and final album. Fans are good that way, but deep down we never forget. We’ll continue to wear out the grooves on our Super Black Market Clash and London Calling LPs, but Cut the Crap still goes down on the band’s permanent record.

This Is (Not) Radio Clash: Cut The Crap Was a Snapshot of a Legendary Band's Low Point