It may be hard to believe, but Ty Segall is back with new music. Only one month removed from the release of FUZZ’s latest record, II, the prolific garage rocker has released a new solo LP called Emotional Mugger. However, there’s a catch: In order to hear it, you’ll need a VHS player.

As Pitchfork reports, Drag City Records has been mailing out copies of the record in the old school format. That’s hardly the only thing unique about the release, however. The videotape opens with a Columbia Tristar Home Video title card saying, “Coming Soon to a Theater Near You,” before playing the 11-track, 40-minute album. Following that, there’s a full screening of Michael Keaton and Nicole Kidman’s 1993 drama My Life (though some copies reportedly play Star Trek II: The Wrath of Khan). 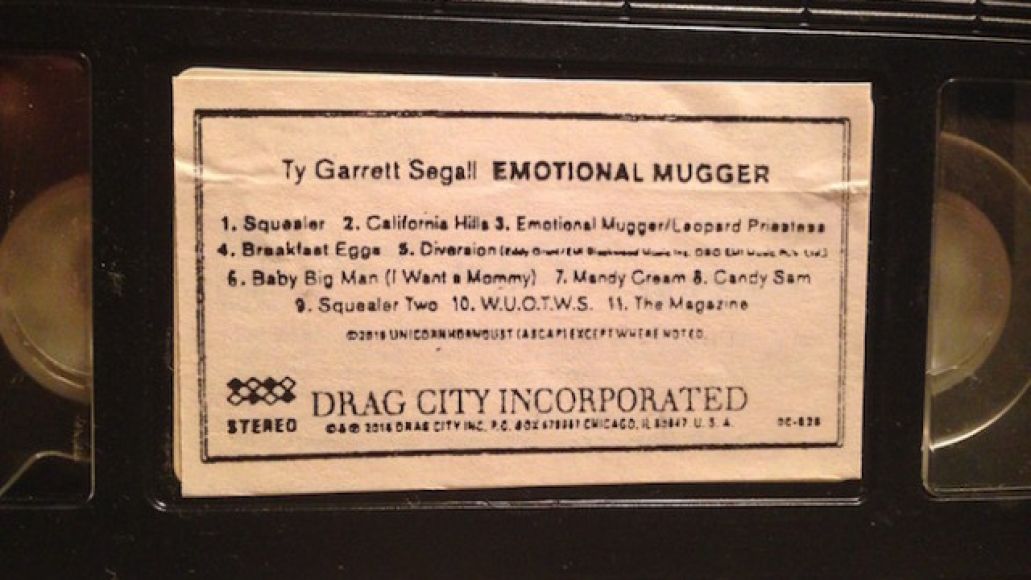 No word yet on when the album will be made available, but we recommend buying a LaserDisc player just in case Segall decides to hop formats.

Enclosed with the video was a crumpled-up letter explaining the album’s title. Read the statement in full below:

What is emotional mugging?

Emotional mugging is a psychoanalytic subject to subject exchange formed as a response to our hyper-digital sexual landscape.

The over communication relayed in cell based technology and content driven media further detaches passengers of our modern society from deep emotional understanding. These detached residents seek meaning and physical contact which is readily available via traditional social standards often displaced thru the lens of the modern id. These individuals turn to salutation based sexual exchange and solo vice in return for a confirmation of non-emotion. This state of being that is well considered normal in our modern society is riddled with denial depravity and causes destruction on both the internal and external levels.

EM is an unfortunate but tragically essential practice in the age of digital intimacy. Essentially “mugging” is non verbal and non-physical emotional exchange, regardless of the status of the mugger and the muggee. Mugging can help to fill the holes in our ego, and the gaps in our society.

Unlike traditional mugging EM is a victimful crime wherein both the perpetrator and subject are victims of their emotional purpose whether the ego intention is subversive or provocative.
Sexual response has been common for both roles and have often led to meaningful non physical sexual relations.