When Courtney Barnett appeared on Jimmy Fallon for the first time last year, it was a huge opportunity. The Melbourne artist was already well-loved in her home country and had started receiving positive press from critics around the world, but Fallon was another level entirely. She could’ve worn pretty well anything — maybe even scored some extra cool points by wearing her red Wilco T-shirt. But she opted to rep a little-known band from country Victoria called Atolls.

Since Fallon, Barnett’s only gone from strength to strength: she put out a record, Sometimes I Sit and Think, and Sometimes I Just Sit, that has appeared on many year-end lists and earned her a GRAMMY nomination for Best New Artist. She’s toured those songs through headlining shows and stadium support slots in Europe and the US. She’s appeared on TV, video podcasts, and thousands of fans’ Instagram posts. And there have been very few occasions when, in front of a massive audience, she isn’t wearing the colors of some Australian outfit.

When Courtney Barnett wears a Wilco T-shirt, the hundreds of thousands of people who’ve played her music over the past year might feel a little better about liking Wilco, but most of Barnett’s hometown fixations have flown further under the radar. Whether it’s the Dick Diver T-shirt she wore in early press photos or the LISTEN T-shirt she showed off to Blur fans on a recent tour, some of these items of apparel warrant a little more explaining. After all, she’s wearing them in the hope you’ll pay attention. So, here are the stories behind some of Barnett’s lesser known wardrobe choices. 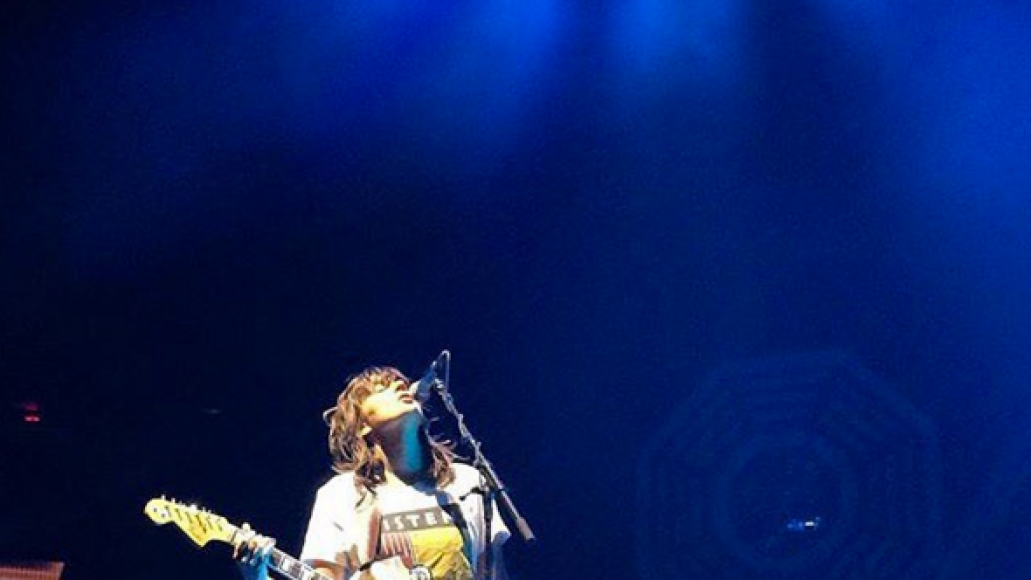 LISTEN began in 2014 as an organization to promote women in Australian music. In a little over a year, it’s spawned a community of several thousand people, a website, a conference, and a record label, and more projects are on the horizon. They’ve also worked with industry lobbies to make local music safer for people — notably, by helping to write guidelines for venues to protect women.

Here’s Chloe Turner from LISTEN: “When I first saw Courtney wearing the LISTEN shirt, it was at the AIR awards when she was accepting her awards via video. I was pretty drunk, but I remember being really excited that she was reppin’ our message to a large audience! After that night, photos started popping up all over social media of her playing Madison Square Garden in the shirt. It’s kind of weird to think someone wearing something as simple as a T-shirt could mean anything, but it happened at a pretty intense time for LISTEN, and seeing someone wear it so proudly was really cool!” 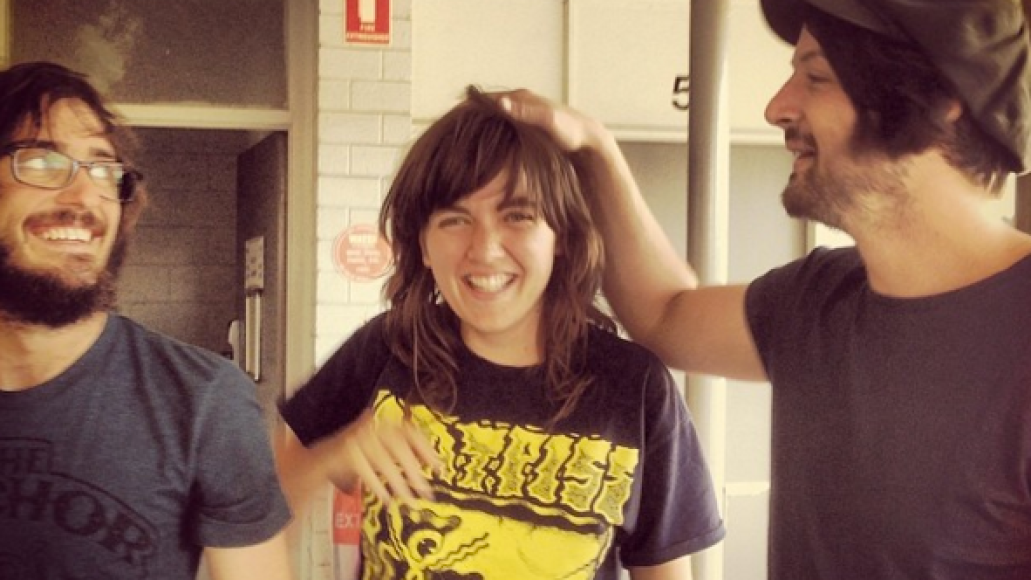 Melbourne’s favorite dirge-lords. Their second album, this year’s BIOMASS, is a tour through personal tragedy and sardonic fantasy. Batpiss are as biting and funny as they are brutal.

Here’s Batpiss’ Thomy Sloane: “Back in 2010, [hotel/pub/venue] The Tote Hotel closed, so I had to get a job and found one at this shitty skater bar on Smith St. called The Blue Tile Lounge. Courtney had just moved to Melbourne, I’m pretty sure, and she was coming in a fair bit to play at open mic nights on like a Monday or Tuesday or some shit. We became mates, and I got her a job there, working the bar. What I do remember is watching her play solo stuff and thinking to myself, ‘There’s something unique about this girl.’ Her songs and her technique of how she played guitar were really interesting. I’m really stoked on how well she’s doing. Also, I should add that meeting her ended up with her meeting my brother, Bones, who now plays bass in her band. Stoked for all of them, and they all are really great people, so I hope they fucking destroy the world! ‘Cause, let’s be honest, they are well on their way.” 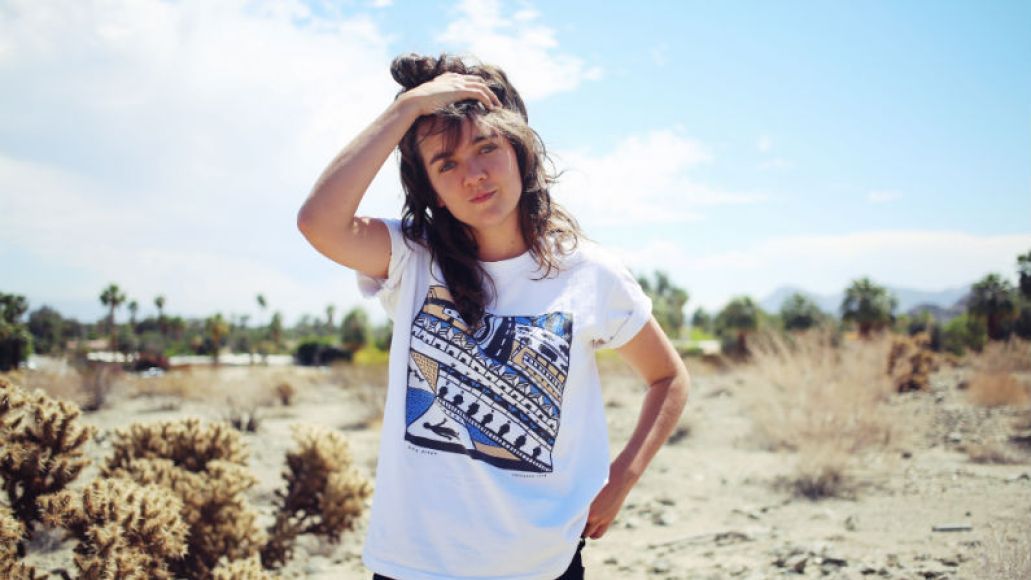 A Melbourne four-piece that began in 2009 and quickly became one of the most prominent Australian jangle groups. Calendar Days, their third album and the cover of which Barnett is wearing, was one of the most critically acclaimed Australian albums of 2013.

Here’s Stephanie Hughes from Dick Diver: “Court wearing the Dick Diver T-shirt in photos means I get texts from my mum now, saying: ‘crtney brnett is wearing DD tshirt on pg 9 of the age 2day.’ Which has been nice. Dick Diver T-shirts turn up in enjoyably interesting places. Once I saw a really slow, crying jogger wearing one. Courtney is on the other end of that DD shirt-wearing spectrum. She works really hard in a quiet way, has a laugh, goes to shows, and understands that having think-pieces on her T-shirt choices is wild. She’s a fan of local bands, so it’s lovely that she represents that to this huge world she’s now visible in.” 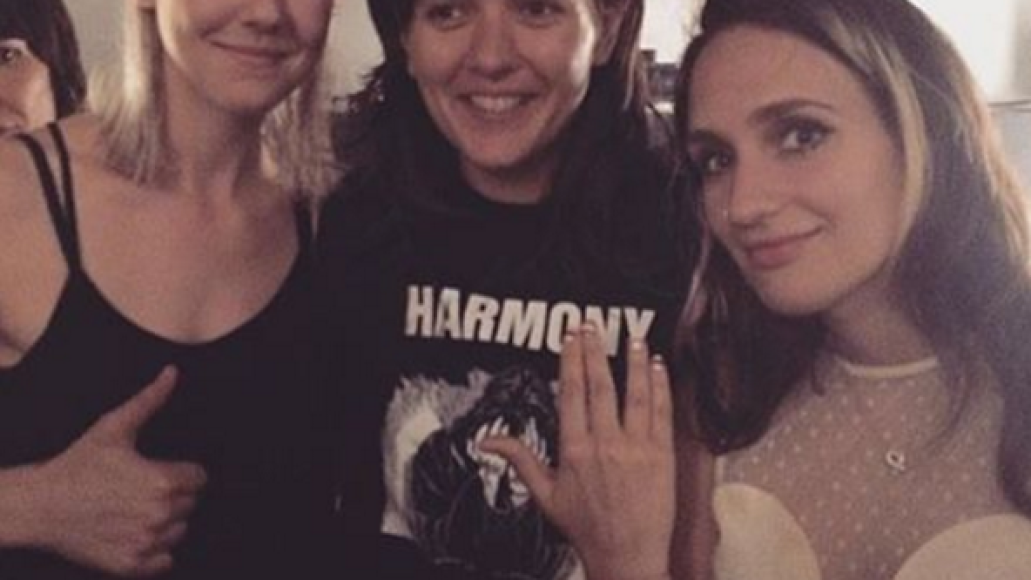 Started by guitarist Tom Lyngcoln, featuring Alex Kastaniotis and mclusky’s Jon Chapple, and fronted by Amanda Roff, Erica Dunn, and Quinn Veldhuis, Harmony combine mutant blues riffs with – as it says on the tin – striking vocal harmonies. One Bandcamp commenter described last year’s Carpetbombing LP as “music to consider a career in misanthropy to.” Which sounds about right.

Here’s Harmony’s Tom Lyngcoln: “Harmony have been fortunate to share a couple of shows with Courtney, Bones, and Dave, and she asked us for a shirt, so I gave her mine. I figured it was better that Courtney had it, because I don’t play drums in Metallica and wear my own shirts. Dean Turner from Magic Dirt used to do the same with my other band, and it is such a big gesture for someone to show that level of support to your half-cooked hobby. Harmony love Courtney and her music and her band, and we were just happy to provide another coupla days’ wardrobe to the hardest-working muso in (and mostly out of) the country.”

YOU AM I T-SHIRT 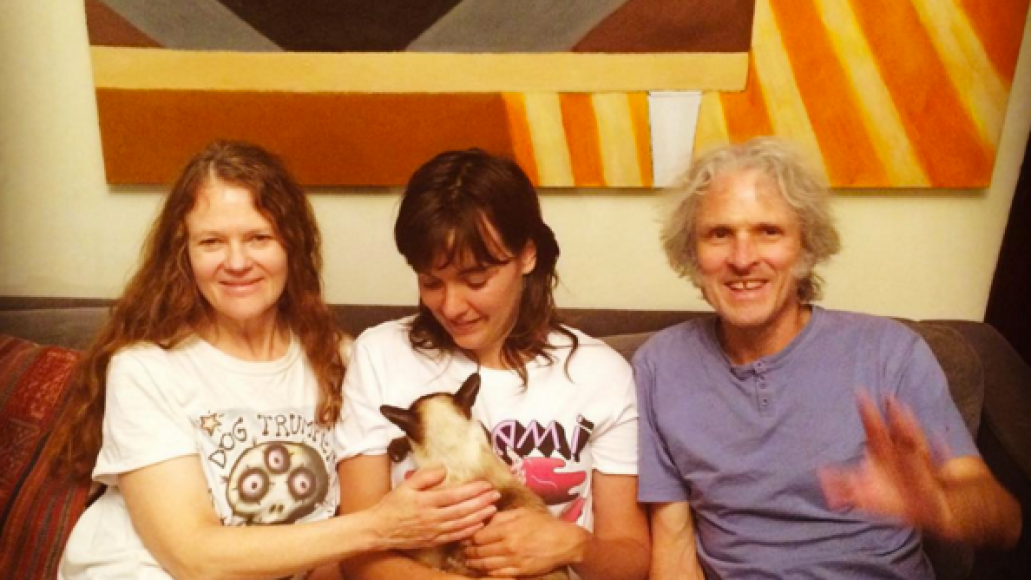 Australian rock royalty as much as Cold Chisel, Midnight Oil, and the Drones, You Am I’s mix of heartfelt and everyday lyrics is an evident touchstone for Barnett’s own music. Their frontman, Tim Rogers, collaborated with Barnett’s partner, Jen Cloher, last year on a phenomenal track called “Stone Age Brain”. On a recent episode of Austin City Limits, she called You Am I’s “Heavy Heart” her favorite song.

Here’s Tim Rogers: “I’ve only met Court five or six times and had some brief correspondences across the oceans. We’ve played together in a few incarnations of our bands, and she has the same presence to play with as she does in conversation. I could only explain it as a quiet command. She looks you in the eye and brings out any truth you have left — or silliness. My favorite combination. A great bandleader and a fierce guitarist, which I got to fully appreciate being five feet from her onstage. I continue to enjoy enormously how she, like our mutual mate Darren Hanlon, has thrown the book of songwriting mores to the six winds and left only the joy of creation in her hands. Some lines, you can almost hear her giggling to herself at the confluence of vernacular and rhythm. She’s also a lot taller than I ever remember and made me like ‘Heavy Heart’. Now it’s hers.” 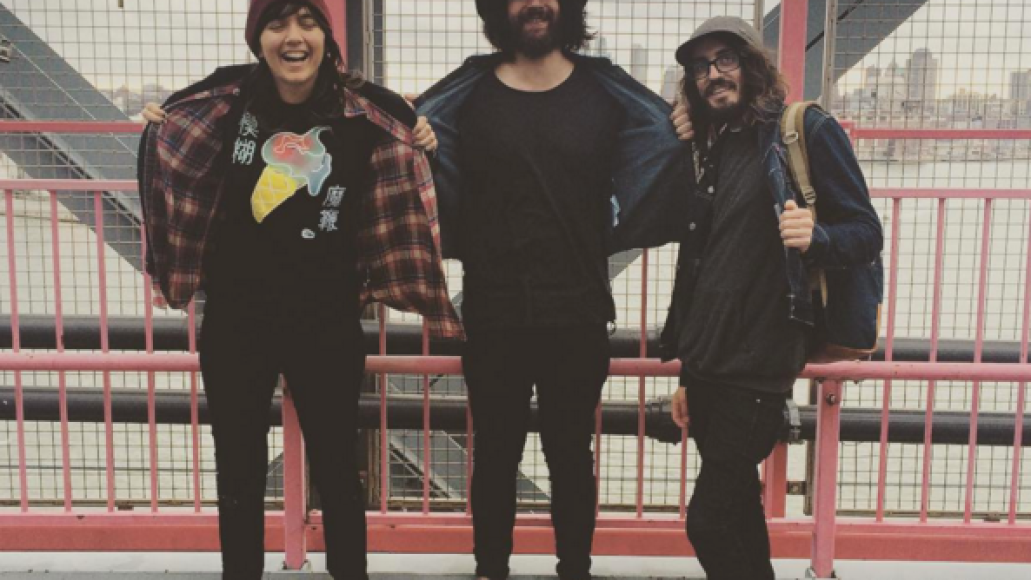 Poison City Records is an Australian record label based in Melbourne and responsible for punk sweethearts like The Smith Street Band and the Bennies, as well as Harmony. When they’re not putting out records, they’re putting on shows from intimate gigs in the store to the annual Poison City Weekender festival.

Here’s Poison City’s Sarah Thompson: “I believe I met Courtney via Bones back when he was working at The Tote — I guess in a similar way to how most people meet within the Melbourne music scene: hanging out, watching bands. It’s amazing that such lovely, down-to-earth people who completely support the Melbourne and Australian music scene are achieving so much success. I remember seeing Courtney play at Some Velvet Morning in Clifton Hill to about 30 people a few years ago and having a few beers afterward. That still happens today. It’s just that now Some Velvet Morning has been replaced by venues 100 times the size, and that’s all due to the combo of being a band that writes great songs, working super hard touring Australia/the world, and also just sticking to their ethics and supporting the music community that supports them.” 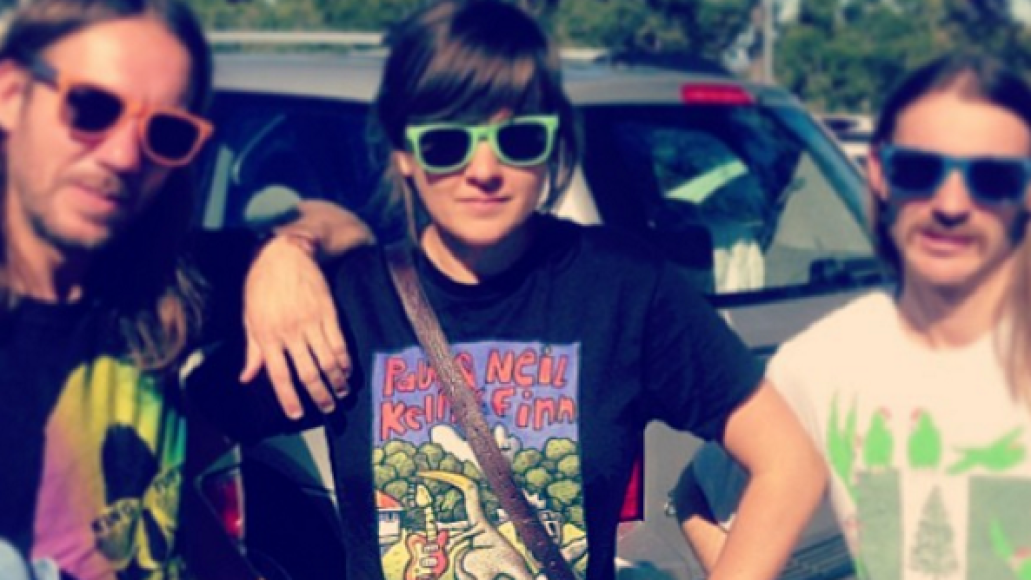 A hallowed Australian singer-songwriter whose 1986 single “Leaps and Bounds” was the “History Eraser” of its time. Kelly and Barnett recently collaborated on a track celebrating another Aussie legend, Archie Roach. And, as Kelly is to Australia, Neil Finn is to New Zealand: a Kiwi songwriter nonpareil whose work in Split Enz and Crowded House spawned dozens of enduring singles before he embarked on a solo career.

Here’s Paul Kelly: “When I first met Courtney, we were in the same football team. She made the half forward flank her own. She’s mapped her own territory in music too. Like all the great songwriters, she creates a world. It’s a familiar world but also completely idiosyncratic. I wish I’d written ‘Nobody Really Cares If You Don’t Go to the Party’.” 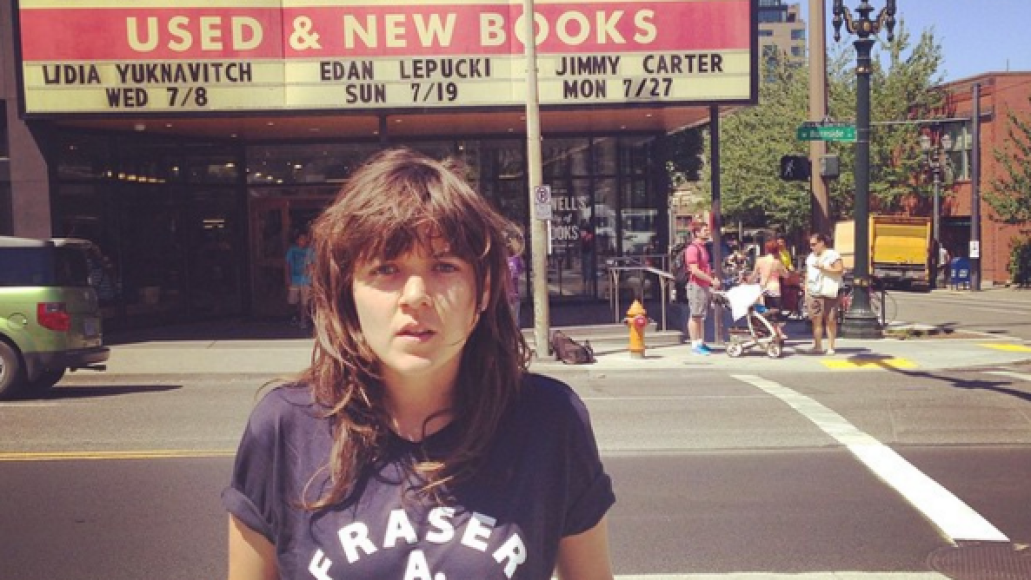 A longtime friend of Courtney’s and a labelmate on Milk! Records, Gorman’s been compared to Bob Dylan, Woody Guthrie, and, more rarely, Lou Reed. CoS’ Adam Kivel praised Gorman’s debut record, Slow Gum, back in June, complimenting “his ability to get to the core of an experience best explored in simplicity.”

Here’s Fraser Gorman: “No friend or fellow musician has supported me more throughout my music career than Courtney. She’s a golden human being with warm and infectious energy. It’s a great feeling having her wear my shirt, but it’s probably just a ‘rep your mates’ thing. I’m wearing a CB Hills Hoist T-shirt right now as I write this. I love it. CB’s merch rules!” 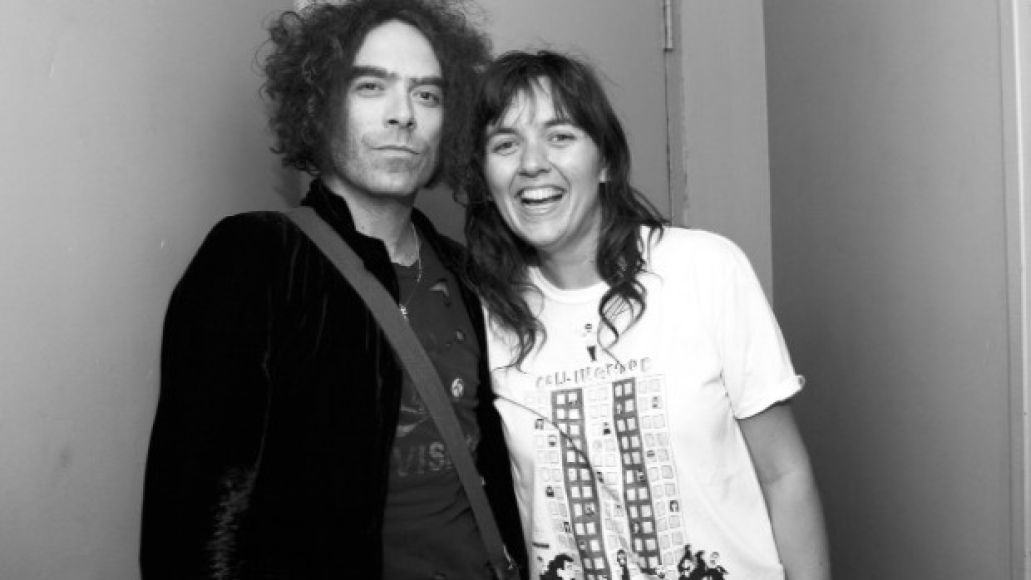 A Melbourne thrash band fronted by the magnetic Karina Utomo. Their breakthrough single, “Collingwood”, satirized/celebrated the lifestyle of the people who hang around the suburb’s live music venues. Since that went viral, they’ve toured the country and landed major festival slots, including next year’s Laneway Festival alongside Grimes, Purity Ring, and Beach House.

Here’s Karina Utomo of High Tension: “Stoked that our mate of mates Courtney Barnett is smashing it globally! Go C’Barnsey! Keep paving the way for true blue talent. C’Barnsey flying our 30666 pride in the form of the “Collingwood” tee video memorabilia is aligned with a core High Tenno value: ‘Mates till the End.’ It features our dearest brothers King Parrot, Thomy Sloane (mayor of Collingwood) and Batpiss, The Nation Blue, Chopper Reid (RIP), Matt Weston’s dogs, and 86 Tram, and Barnett is in there somewhere too, all drawn on MS paint by legitimate local legend and artiste Sarah Thompson of Poison City Records. True Collingwood Punk Metal is about bringing mates together.” 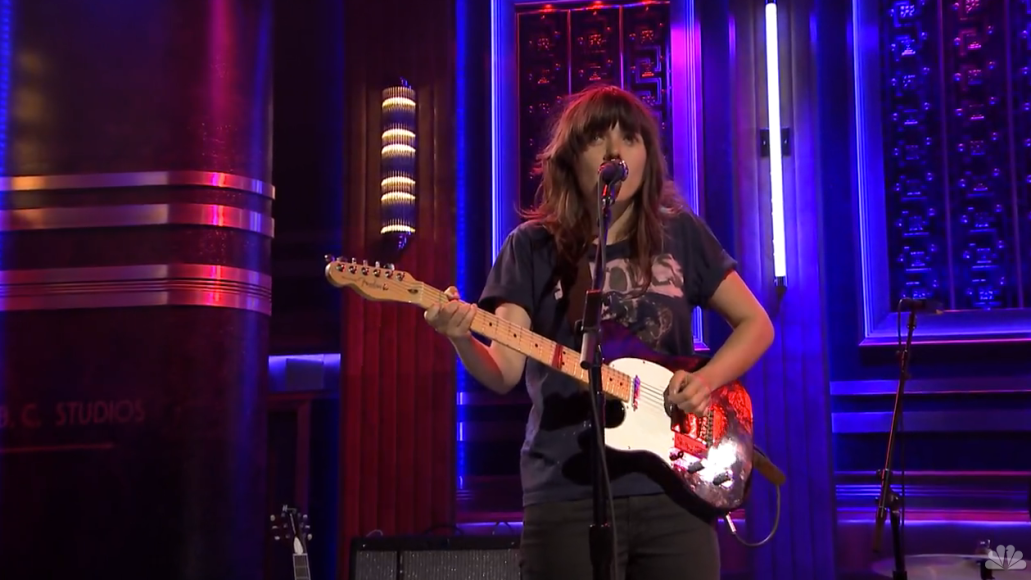 A side project from King Gizzard & the Lizard Wizard’s Lucas Skinner, Barnett’s been a fan for years. Like their brother band, Atolls are known for riotous live shows, playing their garage rock to sweaty pubs around Australia. While Gizzard have been spinning out into the psychosphere with the past few records, Atolls have kept it fairly grounded.

Here’s Lucas Skinner of Atolls: “We supported her a couple of years ago at The Toff, and I hand-stenciled a crappy Kmart T-shirt for her, and she was chuffed. It was funny and awesome to see that on TV. She’s always repping King Gizzard too and is an all-round absolute legend.”