Kendrick Lamar couldn’t have chosen a better year to release To Pimp a Butterfly. At the beginning of 2015, the deaths of Trayvon Martin, Eric Garner, and Michael Brown still loomed like a dark shadow, revealing America’s decades-festering wounds of ignored racial unrest, discrimination, and inequality. Things would only get worse. Police corruption has laid a bad seed in cities all over the United States, resulting in a volatile distrust between police and the people they’re sworn to protect. Just look at Chicago right now. Racial disparity has grown in urban epicenters where social inequity goes unchecked, as crime and mass incarceration against black people hasn’t improved. Hip-hop, a black art, is still largely pimped out by a greedy industry that doesn’t care about the issues that plague black communities. Despite these desperate times, ignorance and apathy still lingers, and history continues to play out.

To Pimp a Butterfly undoubtedly speaks to these times and these issues specifically. Some could say the album fits nicely between political protest records of Sly and the Family Stone or Tower of Power, but it goes beyond merely serving as the soundtrack to a tumultuous year. TPAB as Lamar’s magnum opus echoes what Ralph Ellison did with his novel Invisible Man, Spike Lee with his film Do the Right Thing, and Toni Morrison with her novel The Bluest Eye.

In his book I Would Die 4 U: Why Prince Became an Icon, Touré would call these people “icons.” Their works channeled the collective cultural and political consciousness of that time. Like an icon, Lamar has proven that he has “the antennae, the sensitivity, and the intellect to become a thermometer of [his] era.”

To Pimp a Butterfly finds Lamar as the unexpected icon and voice of an exasperated yet idealistic millennial generation. “The main theme about this album is leadership,” he said in an interview with MTV. “And how I can pimp that for better or for worse.” There’s no question why the album has already been treated as a cultural and educational treatise. The song “Alright” has served as a cry of freedom among #BlackLivesMatter protesters, and the album has already been taught in a New Jersey classroom. Lamar’s outreach has even extended beyond music, as his Reebok shoe – a symbol of reconciliation and peace amongst gangs – launched in June. Released in mid-March, the album presaged a traumatic year and articulated fears, apprehensions, and hopes even before we were able to realize them. The album transcends the hackneyed concept of simply recording our bloodstained and brutal history; instead, it chooses to become a part of it.

It’s fitting that Lamar channeled the life-giving liberation of ancestral black music from watercolor blues, stream-of-consciousness jazz, free-form poetry, and turbulent funk. Traces of Parliament-Funkadelic’s proverbial riots are heard in “For Sale?” and “King Kunta”; an epic freestyle jam is found in “For Free?”; and Prince-ly R&B sprawls coalesce in “These Walls” and “Complexion”. Meanwhile, Lamar’s message ricochets from a convulsive ticking time bomb in “u” to an omniscient cultural maestro in “Hood Politics” as he tries to unravel the unresolved burdens of fame, survivor’s guilt, and depression. 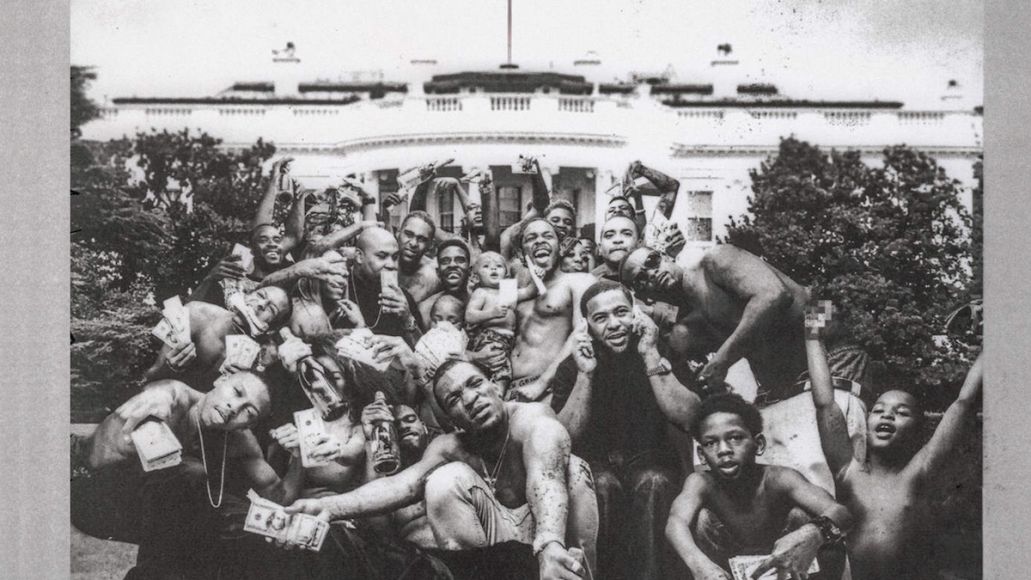 These unresolved feelings chronicle his transition from the retrospective, rebellious kid in good kid m.A.A.d city to the angry, weary-of-the-system celebrity in TPAB. His journey is emblematic of black experience, black power, black rage, black sound, and all the ambiguities and complexities in between. The self-deprecating “The Blacker the Berry” and self-celebrating “I” offer a dual double-consciousness that breathe life to the complex black experience. “The Blacker the Berry” offers a harrowing introspection into Lamar’s conflicted perception of his own blackness that circulates on a larger scale, outside of himself — “You hate my people/ Your plan is to terminate my culture” – and, on a smaller scale, inside himself: “So why did I weep when Trayvon Martin was in the street when gang banging make me kill a nigga blacker than me?” Serving as a stark antithesis to “The Blacker the Berry”, “i” is a black pride proclamation as he maneuvers across an urban jungle of horrors and triumphs reminiscent of good kid m.A.A.d city, echoing James Brown’s “Say It Loud” and Maya Angelou’s “And Still I Rise”.

Make no mistake: For most of the record, he’s talking to a very specific audience. Since his first record, whenever I listen to Kendrick, I always feel a sense of alienation, like an outsider peering in upon all the madness. Maybe I’m not meant to understand it, and that’s OK; I, like many others, am meant to listen. “It’s not for radio,” said Lamar during an interview with The Breakfast Club. “It’s all about giving back.”

In his most bruised and scarred moments, Lamar mirrors our feelings of despair amidst the turmoil and unrest in America. This year, we – like Lamar – “went running for answers.”

Artist of the Year: Kendrick Lamar