Plenty of artists have penned op-eds, articles, reviews, or interviews, from guest posts on popular sites like Pitchfork to specialized publications like The Talkhouse, which focuses solely on artists writing about other artists. But apart from a few zines, few media spaces provide an artist-run platform for other artists to speak openly on issues they care about.

That’s changed this past month with the launch of Spark Mag, a website featuring politically-focused interviews and features with musicians “who are promoting progressive and radical ideas through their work.” Founded with the support of Demand Progress, a national grassroots political organization, and Impose Magazine, Spark Mag was founded by Victoria Ruiz and Joey DeFrancesco of Providence punk group Downtown Boys. In their view, the site’s goal is to give a space for artists to delve into political and social causes in their writing that they may not have the chance to in other interviews.

Downtown Boys have a reputation for being politically outspoken in their music, covering systematic social issues involving race, gender, economics, and power structures. The group is also one of the few contemporary North American groups to write lyrics in both English and Spanish. Downtown Boys are known for explosive live shows, where Ruiz uses the stage as a platform to express her views between songs, culminating in energetic performances that also display some of the best use of saxophone in punk today. The band has had a busy year between touring the US and releasing their debut full-length studio album, Full Communism, but still found time in their schedule to found a new media platform.

The website, still in its early stages, features writing by artists as well as music journalists that hones in on specific social issues, as opposed to focusing on album cycles or reviewing new releases. Spark Mag also features a store for the artists who contribute to sell their work directly. While Ruiz and DeFrancesco emphasize that the site is not an extension of their band but rather a separate platform for them to express themselves, it’s still novel for musicians to launch a publication where they are in charge of the editorial content.

The weekend after Spark Mag’s launch, Ruiz and DeFrancesco hopped on the phone to discuss the process behind starting the site, the goals behind it, their thoughts on how the media covers artists, and why they’re sick of being asked why they’re so political.

How has the first week of the site gone for you two?

Joey DeFrancesco (JD): It’s good. It’s been a crazy week. We are a small team working on it, so getting the site up was a little chaotic, but I think it’s gone really well. It seems like people are really excited about it, posting a lot of stuff and sending us a lot of things. It’s been exhausting getting it up, but it feels like there’s a lot of energy behind it right now, which is exciting.

Victoria Ruiz (VR): Yeah, it definitely seems like there’s a lot of energy. It seems like it’s helping to fill a really big void in media.

What was your main inspiration in starting the magazine?

JD: We had been friends with David Segal, the executive director of Demand Progress, who are behind the site and are funding it. He had been doing work in Rhode Island for a long time. He’s actually a former state rep here. He’s a politician and had liked our bands for a long time and wanted to do something with us. We proposed this idea of merging a cultural activity with Demand Progress’ work about a year ago, and it seemed like a fantasy. We’ve been slowly chipping away at making it a reality. Ideologically, it’s like Victoria is saying: We need more media spaces that we control and that are going to take this kind of work seriously. Some of our experience in the media as a band, and a lot of other people’s experience in the media as a band, or their inability to have an experience with the media, led to a need to have some sort of alternative.

What is the range of issues you would like to see the site cover?

VR: The articles and issues are starting at a baseline of entering a clearly political dialogue. We’re already entering a space where we’re talking about power dynamics. I think that even with mainstream publications that may have really good writers and have a lot of people reading them, we were still entering a baseline of like, “You are a political band — tell us about that.” We’ve said it so many times. It’s time to step up the level of dialogue and conversation. I think that the articles on Spark do that. That’s what we want to do. We’re really thinking about how to create a dialogue about the current culture that we live in and how it impacts systems of power.

Do you think it’s important to have the artists control the narrative with the articles and features on the site?

JD: Yeah, I think it’s a cool thing to have. We have conventional things also, where music writers who aren’t making as much music are writing about people more focused on making music, but as you’ve noticed, there’s lots of artists writing about themselves, directing the interview, or writing about other artists. I think this is great on a couple points. One is the economics of it. In music journalism and publicity, there’s a weird situation in which artists are sometimes putting in way more work to make an article happen, but aren’t seeing a dime from it directly. To give people the opportunity to get paid and make some money writing something about themselves or about an artist they admire is a good way to help make their own art more sustainable, which is a really important thing. Ideologically, allowing artists to direct the narrative expands the dialogue to a level where we don’t need questions like “explain why you are so angry,” but can get into the real details of it all.

What magazines or websites did you look to as a model for this? On a week-to-week basis, are you thinking about doing some sort of theme like sites like The Media, or will it be more freeform?

JD: I think it’s going to be pretty freeform. It’s not going to be an issue-based thing like The Media. They’re obviously great and an inspiration behind the site, but we’re just going to be posting stuff that we get. It’s hard to fit an issue focus like they are. As of now, we’ll probably be posting a few articles a week, three or four, with the capacity we have. We still don’t have a huge budget or huge support, so that’s related to the capacity we have, and honestly that’s as much as I think we need to post at the moment. I think they’re a great inspiration, and Impose, who we partnered with, are also an inspiration. I think they do a really good job covering both very popular established artists and also breaking new artists that aren’t going to receive a lot of media attention in more corporate outlets. 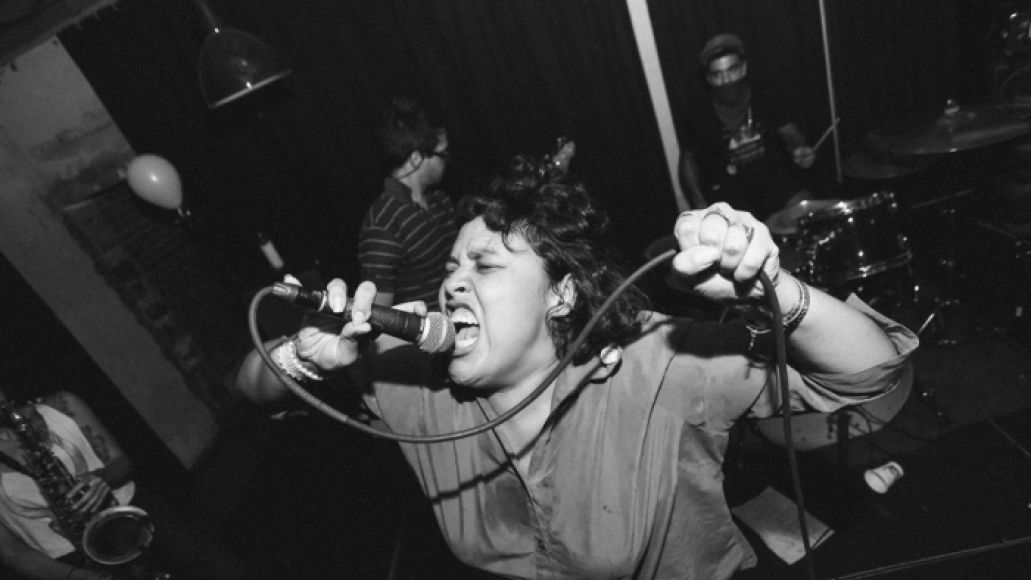 A couple months ago, Jana Hunter from Lower Dens came to Houston and gave a lecture about politics in music and posed the question if artists had a responsibility to be political in their music. I was wondering if that’s something you agree with, and maybe one of the reasons behind starting something like this.

VR: I think part of what makes this so exciting for me is this project was started a bit independently of Downtown Boys. First and foremost, we are people who are affected by the world and by the things going on in it. Downtown Boys, for me, is one way to have agency in that, and creating a media platform is another way to have agency in that. They can use each other and coexist, but I think it’s really important to think of artists as more than just their art. A lot of artists are racist, a lot are misogynist, a lot are political, and a lot are feminist. We’re more than any of the products we make. I think that’s part of why this is really exciting, and also because it’s rooted in Demand Progress. Joey and I, we do a lot of things outside of Downtown Boys; we have political drive and interest. As much as I’m happy that this gets to coexist with Downtown Boys, I think it’s also really important to realize this is another thing we do.

JD: I agree with all that. I feel like responsibility implies choice in a way, and I think for our band and all the artists we’re featuring, it isn’t a choice. Your art is a reflection of who you are and where you’re standing within power structures. Being political isn’t just making a song where the chorus is “fuck this thing.” That is political and that’s good, but it can be a whole host of other things. One of the interviews we have up now is with Sadie from Speedy Ortiz and she talks about the politics of subtlety and how she reaches some of the bros who come to her show.

Like Victoria says, everyone is inevitably going to be more than what their product that they create is, and everyone is going to be bringing that to the table. What the mainstream media often focuses on is people bringing a certain set of characteristics to the table and bringing their experience and their interpretation of living within a certain set of power structures to the table. Those are political too. The boring, rich, folk revival bands like Mumford and Sons, you wouldn’t necessarily ask them if they have a responsibility to be political because they’re upholding power structures. They don’t think about it as being political, and they don’t think about the responsibility, but in fact they have that responsibility to their corporate overlords to reproduce those structures and make those corporations a lot of money. That is their responsibility as a group and how they express their politics. I don’t think it’s a choice, necessarily. I think it’s what you end up doing on either side of the equation.

Beyond Downtown Boys: How Spark Mag Is Changing the Conversation About Political Music