No one has ever tried to change the way we hear before. Companies are always trying to come up with new devices to change how we listen — headphones and earbuds and bone conduction — but that’s concerned with sound going outward. Co-founded by Noah Kraft and Fritz Lanman, Doppler has spent the last two years concerned about sound going inward. With Here Active Listening, their goal has been to give humans real control over the audio input their ears receive.

Physically, Here looks like a pair of little white speakers that you place in your ear via your standard rubber earbuds. They’re automatically connected to an app when you remove them from their carrying/charging case, from which you can then control the way you’re actually hearing the sounds around you. Doppler likes to think of it as “augmented hearing.”

You can lower or raise the volume, yes, but the real wonder of Here is in the tools that let you, well, augment your hearing. You can add effects like flange and reverb, controlling the highs and lows of everything with a five-point graph. Tap on the bass booster and drag on end of the graph all the way up for a thunderous increase to the low ends around you. Presets are also built-in, so you can turn any listening environment into an echoing hallway or Abbey Road Studios or even the Sahara Tent at Coachella. 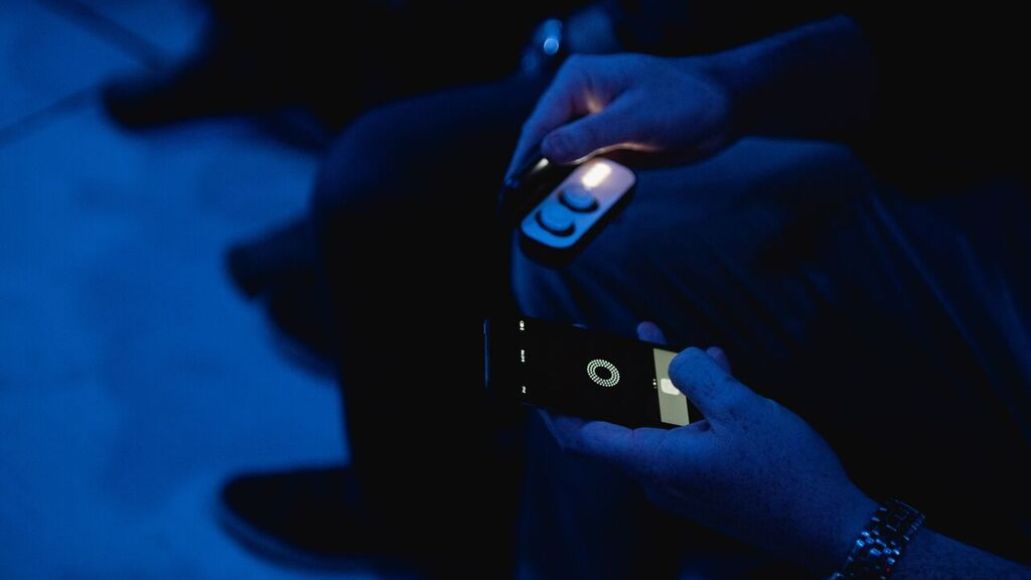 It’s easy to see how techies and audiophiles might be drawn to what Doppler has made. Technologically, Here is wildly impressive; the algorithms and processors needed to intake and alter live audio at imperceptible speed are astounding. Even the charging case, which holds two full charges and feeds Here on contact, is an impressive piece of tech. When I first tried the prototype at this year’s Bonnaroo, I instantly saw the potential for how Here could alter — and possibly even perfect — the way we experience live music. When I toyed around with a production model a few weeks ago, the strange joy of it all had me laughing in tears.

On Saturday evening, I finally got the chance to experience Here in a live music setting. Doppler held a Sound Experience, essentially an opportunity to put Here in people’s ears for the first time in a shared space. Special guests filled the newly opened National Sawdust in Williamsburg, Brooklyn, a gorgeous venue with laudable visual and sound qualities all its own. Everyone was given a set of Here and brought along on a curated listening journey to explore what exactly the device is capable of.

Doppler’s Director of Music and bassist forLate Show with Stephen Colbert Michael Thurber emceed the evening, guiding us through the unfamiliar technology. The first thing we all had to do was play with the sound level. Now, sure, National Sawdust could have simply upped the volume on his microphone, but as a first glance at Here’s power, it was exciting to have his voice suddenly boom louder because I told it to. Though I knew I was altering the output, the audio sounded as clear as any normal input, just a few decibels louder. 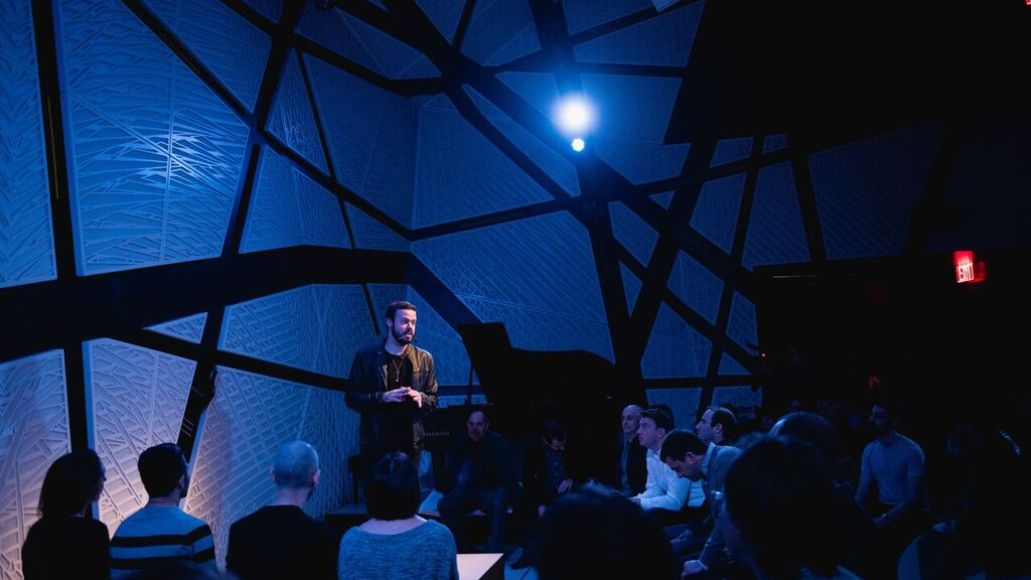 Thurber than introduced jazz pianist Kris Bowers, the man who played keys on Kanye West and Jay Z’s Watch the Throne album. He began playing a film score, and after a few seconds, we all switched on Here’s flange effect. A crunchy echo suddenly attached itself to every note Bowers played. They clearly chose flange because it’s one of the most drastic alterations the Here app provides, but it wasn’t necessarily an impressive choice. It was akin to starting to feel a buzz after the first few drinks; something’s noticeably different, but not terribly exciting. It lacked the surge of excitement I had the first time Kraft had me turn on echo in his office and simply snapped at me, and I could see from people’s faces that they weren’t sure they should be impressed yet.

The next performance, however, was something that set up the most basic premise of Here in a way that once again had me thinking possibilities. Imagine holding an intimate concert in a loft or bar somewhere, but having the instruments reverberate and fill the air as if you were in Carnegie Hall. That’s exactly what happened when award winning violinist Tessa Lark performed her piece. I saw people closing their eyes and swaying with what to them sounded like the most expansive and beautiful concert venue in the city, but there we were in that limited capacity Brooklyn space. My ears wouldn’t have known the difference if it weren’t for my eyes, as the notes were taken to a level of lushness that simply did not exist in that room.

The transportative, transformative abilities of Here became even more apparent when violinist Charles Yang played “The Star-Spangled Banner”. We had all switched on the stratosphere preset, something that mixes reverb and flange into a wailing brew –and people were cheering. It’s true that Yang was putting a Hendrixian twist on the national anthem, but it was apparent to me that the audience weren’t actually aware what they responding to. When they “wooed” and “wowed”, they were reacting to what they were hearing, not what Yang was playing. The notes were drastically different in your ears, but your eyes knew what they were seeing and so your brain simply said, “That sounds like this.” It was right then that you could see people were getting that Here can dramatically alter the way we perceive what we’re hearing. 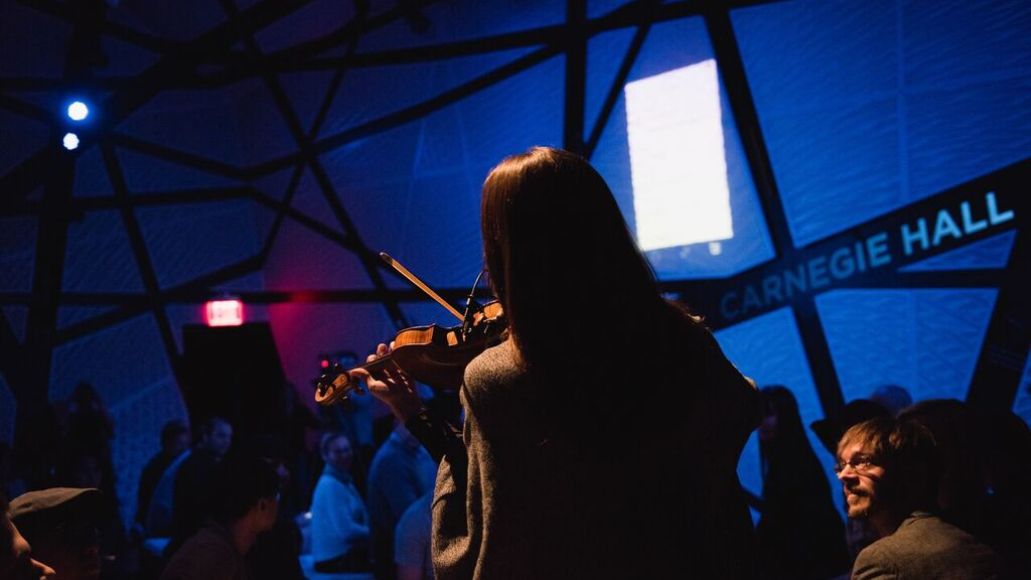 It’s also right then that you could see some of the shortcomings. When the music stopped and the applause began, it was jarring. Someone clapping right next to your ear when it’s up in the stratosphere isn’t the most pleasant experience — in fact, it was rather shocking. I also wish I could have controlled the presets more precisely. What if I want my stratosphere to have a touch more mid-range than the guy next to me? You can control any of this when not using a preset, so it’d be nice to have them as a starting point rather than a one-shot configuration.

When Thurber was joined by composer/percussionist Andy Akihio and multi-instrumentalist/The Late Show band member Louis Cato, the reins were finally taken off. We were allowed full control of our Here devices, able to manipulate and play however we pleased. I soon learned that you can only use two modes at once (flange and echo, for example), and noticed how challenging it is to find where you want everything set. There’s obviously a learning curve as you feel out the subtleties of shifting the EQ of live music, but I was bummed I never found myself happy with my mix before the performance ended.

Still, I wasn’t frustrated by it. I loved hearing the richness of the steel drum when I switched over to the Abbey Road preset, and wanted badly to perfect my control over the app. There was this joyous little moment when people started popping their heads up from their iPod Touches as they hit on something they thought sounded good, realizing that what one person was hearing was entirely different than the person next to them. Seeing everyone’s head down, faces lit by screens at first gave a dreadful feeling that technology had once more found a way to remove us from the experience around us, but really, the point of Here is to augment that experience. You could see from the smiling faces and those who were still fiddling around long after the music had ended that people were starting to feel that. 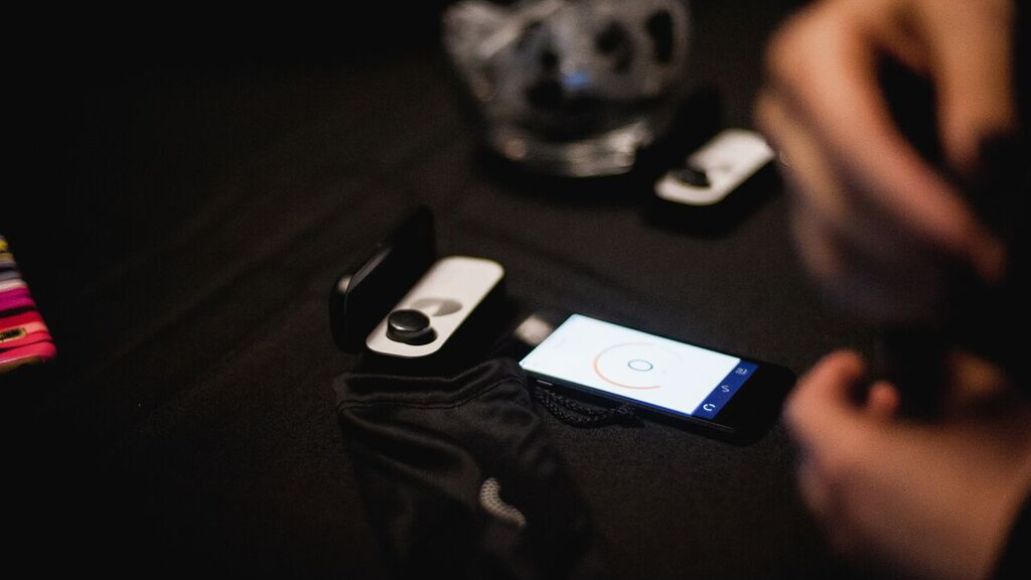 Though the Sound Experience felt more like a tease than the beginning of a technological breakthrough, it did nothing to diminish my excitement for what Here might be capable of. There were moments when you could sense the listening experience was being altered in a frighteningly exciting new way. Imagine if you could curate a festival stage with Here: You could transport a crowd in a field to an intimate venue, all while blocking out sound bleed from nearby stages. Or if you could take it into your least favorite venue in town and tweak the way you’re hearing that crappy sound system so it’s suddenly not so bad.

The possibilities don’t end with music. Lanman mentioned the potential for Here to help the hearing impaired, to tune out the distractions of a shared workspace, to change the way we walk through a city. There are presets on the app to take away the roar of a subway or the white noise of an airplane, even to shut up that crying baby in row 35. There was so much we couldn’t play with during the short Sound Experience.

And that’s part of what’s so exciting about Here. No one really knows what it’s going to do yet. Musicians working with Doppler are constantly coming up with new ideas and uses. “I never want to do another vocal session without Here,” Cato said. Imagine if you could hear what sounds best before ever recording a note.

No one has ever tried to alter the way we handle one of our senses so drastically before, so perhaps this technology isn’t perfected yet. Maybe there’s a better way for the app to function or for the levels to be controlled. (Being able to save your favorite combinations would be nice, too.) That’s part of why Doppler is limiting Here to just 10,000 units at first, distributing them to Kickstarter backers and waitlist-ers along with a select group of musicians and industry leaders; they want feedback from these early adopters to perfect the product before it goes wide. Any new invention is going to take time to nail down, and, from the user end, time to get comfortable with the device. Call me an enthusiast, but from this short experience with Here, the potential appears vast and enticing. It felt weird when I finally took Here out of my ears and had to hear the world normally again, and I already can’t wait to put them back in.