Photos Courtesy of the Artist

Red Bull Sound Select Presents: 30 Days in LA wrapped up an eventful November with something bold on Monday night: a concert where the audience didn’t know who would be performing. The show sold out far in advance, and though it is a modestly sized room (the 600 capacity Teragram Ballroom), the fact that Red Bull can fill a venue without even announcing the performer speaks to the success of the series.

The reason this could happen is clear. During November, the second installment of 30 Days in LA has brought a number of notable moments and artists into the city’s assortment of small venues. Fans have seen TV on the Radio perform with Miguel, Future Islands’ Sam Herring getting on stage with Badbadnotgood, and intimate experiences from some of music’s most exciting young talent like Grimes, Vince Staples, and Flume. The run made good on last year’s trial that brought Chance the Rapper, Run the Jewels, and Kurt Vile, along with surprise appearances from the likes of Drake and Lil Wayne to the City of Angels. With that pedigree, a reputation has already been born, enough to get people to pack into a small venue with confidence that whatever artist would be gracing the stage would deliver. 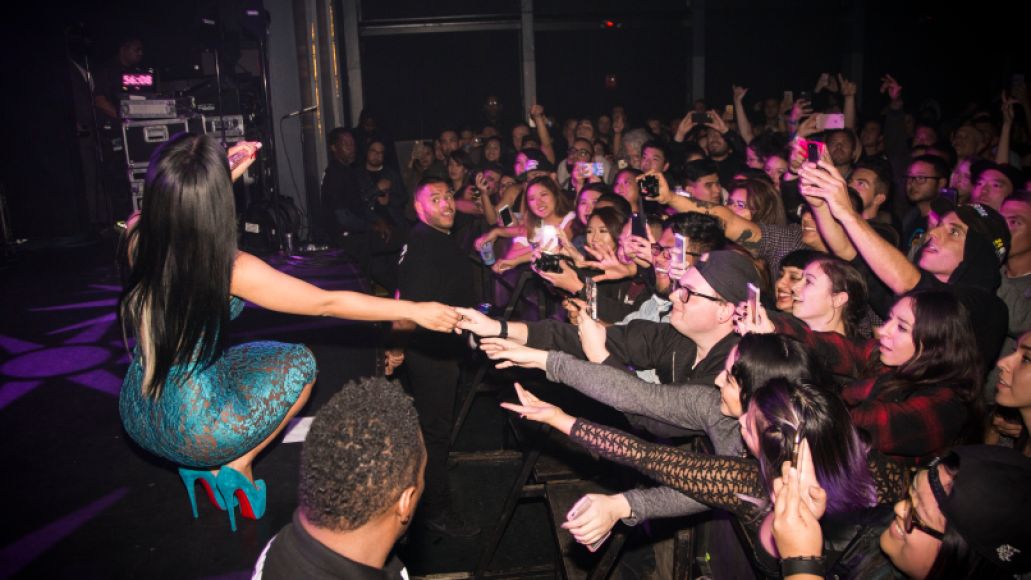 Prior to the big reveal, rumors swirled, with Rihanna, Missy Elliot, and Nicki Minaj all popular guesses based on speculation that it would be a female performer of the rap or R&B genre. But even before that, part of the appeal of 30 Days in LA was the spotlight offered to Sonny Digital (producer responsible for “Same Damn Time” and the ubiquitous “Tuesday”) and spirited MC Jazz Cartier, who both offered up impressive sets to open the show. The series is pairing rising acts with more notable headliners, and Monday was no different, with Digital mixing his own well-known club favorites with hip-hop’s biggest hits, while Cartier overcame nonsense stage banter to prove he’s a rapper with the songs to match his abundance of energy.

But the night’s main event was Minaj, with everything set in stone once the stage was adorned with a pink fingerprint projection. Opening with “Superbass”, it quickly sank in how big of a risk the hour-long set was from the rap titan. Though Minaj is an arena force at this stage of her career, the performance could have easily fallen flat if the crowd had wanted a rock act, pointing to just how well Red Bull knows their audience and how good Minaj is at selling her music to those who are less familiar. Much of the night became a sing-along, with the fans finishing Minaj’s lines for her and chiming in on the backing track choruses. 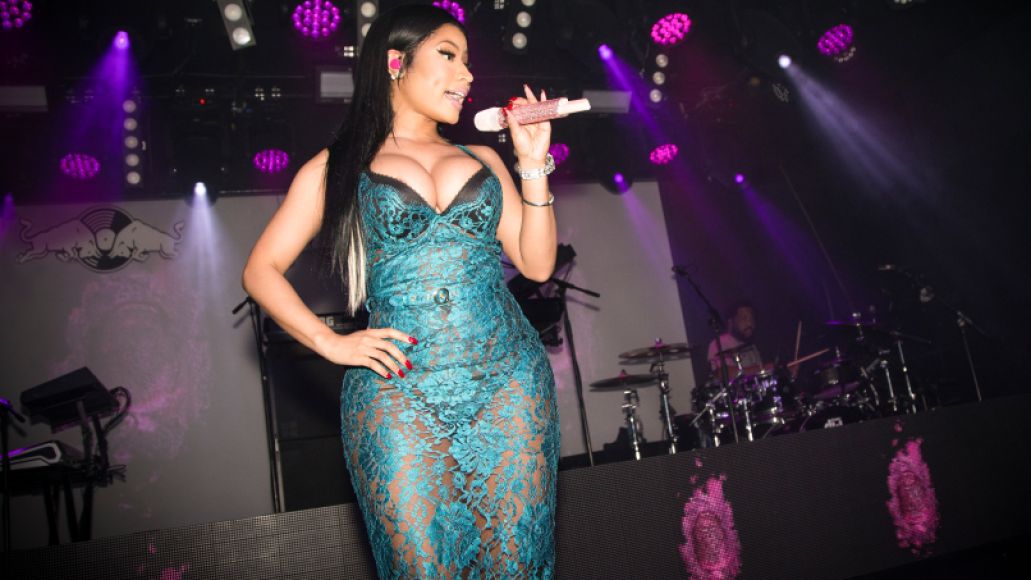 Part of this is just the popularity of Minaj. The eruptions that occurred for “Truffle Butter”, “Only”, and “Beez in the Trap”, as well as the expected roars for massive hits like “Anaconda” and her Rae Sremmurd features, proved that even a crowd peppered with casual fans is still intimately familiar with her music. But part of the overall success of the concert was the charm of Minaj. While on stage, she doesn’t just perform through her raps and her singing; she performs with her eyes, her facial expressions, and her movements. When he laughs or smiles, the feeling is infectious, with her entire onstage persona a presentation of likable details. Even in a tiny room, everything about Nicki Minaj seemed larger than life, with her never needing to play down to the room, but rather coming across as the megastar she is.

All that said, there is a disparity in the music of Minaj. The last few numbers of the night focused on her more EDM-infused tendencies, including “Starships” and her David Guetta collaboration, “Turn Me On”, and saw the energy of the room shift into something a bit more basic. It makes sense for Minaj to dip her feet into one of music’s fastest growing markets, but the songs themselves remove a lot of what Minaj does best, watering down her attitude and delivery in favor of something much safer and ultimately boring. But this small gripe doesn’t take away from the accomplishment of what both the organizer and the artist were able to pull off: a promise of a huge surprise that actually delivered and a rare chance to see one of music’s biggest stars in cozy quarters.