Like many geek events, the release of a new Star Wars film is a chance for fans to wear their fandom right on their sleeves. People dress up as if they’re attending Comic-Con, donning homemade Jedi cloaks and ridiculously expensive Stormtrooper outfits. Those attending the December 18th premiere of Star Wars: The Force Awakens, however, have just seen their cosplay aspirations delivered a shot as destructive as Luke’s Death Star destroying blast.

Bow Tie Cinemas, which has theaters along the East Coast and in Colorado, have issued a list of items they’re prohibited from screenings of The Force Awakens. Though “costumes are welcome,” any such outfit cannot include “face coverings, face paint, capes, cloaks, simulated weapons (including lightsabers/blasters).” So that essentially leaves it at blast-less Han Solo or Queen Amidala in her white battle outfit. I suppose you could get away with Slave Lei, but leave the neck chain at home.

AMC’s 346 theaters will allow fans to bring lightsabers, but is restricting “weapons or items that would make other guests feel uncomfortable or detract from the movie-going experience.” Meanwhile, Cinemark is prohibiting masks, face paints, and simulated weapons.

With the unfortunate streak of movie theater shootings (in addition to every other kind of mass shooting) hitting the US this year, such restrictions are by no means surprising. That said, it’s hard to imagine anyone causing any real damage with a green flashing lightsaber toy. 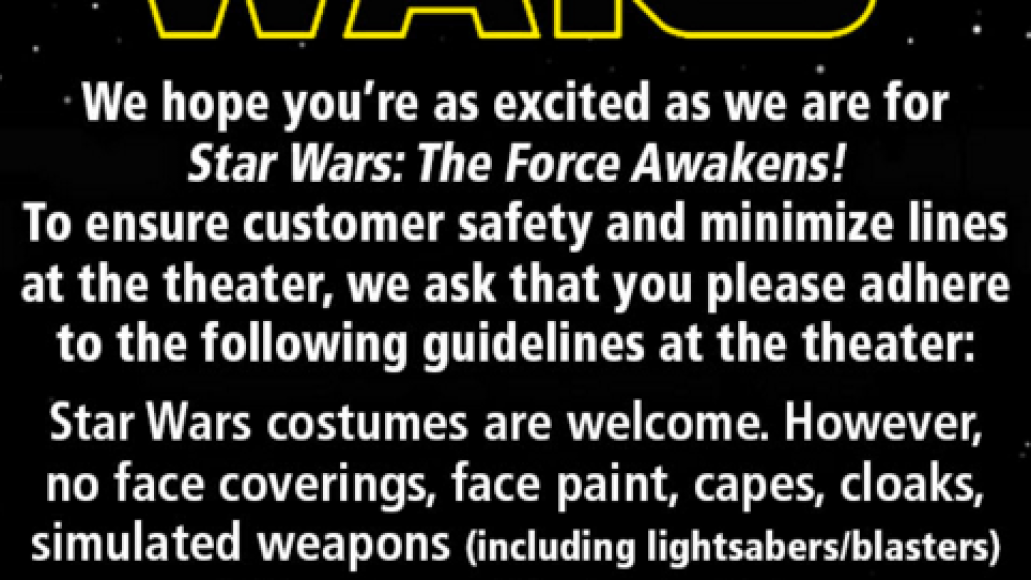