Former Python Terry Gilliam is nothing if not a grim fantasist – a wild-eyed dreamer who deeply distrusts systems and offers underdog protagonists a way to navigate them, even when escape seems impossible. This is most apparent in his 1985 dystopian classic Brazil, certainly one of the most fascinating and compelling depictions of Orwellian-esque sci-fascism ever put to screen. Just like his fellow Pythons, one of Gilliam’s recurring targets is bureaucracy — specifically the inherent inability of impersonal systems to account for or contain the sheer unpredictability of humanity. Three decades after its release, Brazil is perhaps his most masterful example of this thesis and a film that deserves to be remembered for decades to come.

The cold, bureaucratic nightmare of Brazil’s unnamed dystopian metropolis would have made Kafka proud. The world shows all the hallmarks of your classic dystopia: an endless sea of gray skyscrapers overseen by autocratic government agencies with scary names like Information Retrieval and the Department of Records; beaten-down office drones dealing with cumbersome technology somewhere between a typewriter and a Commodore 64; and tiny bullet-shaped cars that confine as much as transport. Gilliam’s stifling Expressionism hammers home a world overly obsessed with the convenience of technology to the point where agency is handed over to it.

Brazil’s world is one that seems to run automatically, a constantly chugging machine that no one has figured out how to fix. These mistakes are depicted with comical frequency throughout the film. The inciting incident is as simple as a single swatted fly messing up the spelling of a suspected terrorist on a form (“Tuttle” to “Buttle”), something only the eagle-eyed and present Sam Lowry notices but too late. Processes are started and completed in a constant whirlwind of movement, the mechanisms of bureaucracy speeding by too fast to keep up (as shown by the group of power-walkers surrounding Mr. Helpmann during Sam’s orientation at Information Retrieval). Everyone goes about their business at top speed, as if afraid to look back to see if they’ve made any mistakes.

Resistance is easily dismissed, as well – not by addressing the demands of the aggrieved but by minimizing their wants and needs. The insidiousness of the news media is hammered home in the very first scene, in which pundits on TV dismiss terrorists as “a ruthless minority of people who seem to have forgotten good, old-fashioned virtues. They just can’t stand seeing the other fella win.” Even in the midst of a revolution, the powers that be cheekily underplay the significance of these cries for change – even as an explosion destroys the very TV that tells people to keep calm and carry on, in one of Brazil’s most potent images. 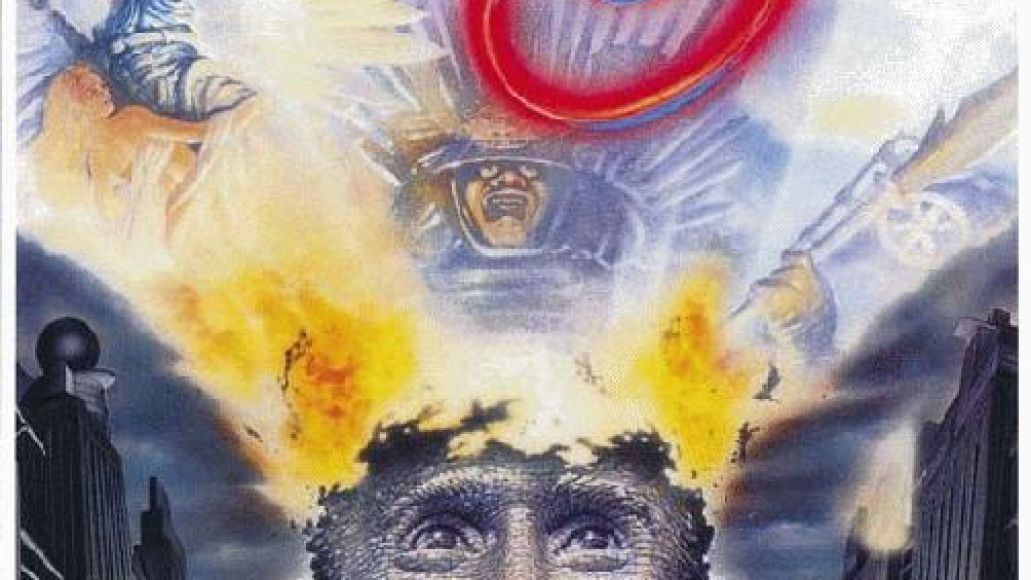 Pushing back against this foggy wasteland of forms and figures is Brazil’s compellingly hapless protagonist: the bookish Sam Lowry, played with impeccable versatility and comic wit by Jonathan Pryce. In a world that keeps its head down and obediently does its work, Sam is a dreamer – when we first see him, he imagines himself a glorious, angelic knight, soaring above clouds that pollution will no longer let him see in the real world. Gilliam’s bold colors and breathtaking models work within these recurring dreams, reminding Sam, like the audience, that there’s more to the world outside the claustrophobic din of his broken-down apartment. In the midst of all this, Sam seems most aware and openly contemptuous of the materialistic, rules-heavy world around him – he scoffs along with us at the absurdity of his mother and her friends’ shopping (and cosmetic surgery) habits. At the same time, he is just as guilty of being part of the system as anyone else: when speaking to the now-widowed Mrs. Buttle, whose husband was killed because of the wrong letter on a form, he insists on her signing her rebate check as she sobs: “Sorry, I’m a bit of a stickler for paperwork. Where would we be if we didn’t follow the correct procedures?”

While it’s tempting to view Sam as the lone voice of sanity in a world ruled by bureaucracy, part of Brazil’s genius is in showing all of the other characters in this world in the midst of a complete breakdown. Ian Holm’s anxiety-riddled boss Kurtzmann is a jittery ball of nerves, a sycophantic middle manager completely incapable of asserting his own authority. Spoor (Bob Hoskins) and Dowser, the aggressive repairmen who come to fix Sam’s air conditioning, bubble and explode with panic and anxiety at the phrase “27B/C” (the form they need to do the work, but don’t have). Even Sam’s robotic, mumbling coworkers take every possible second to flip their screens to Casablanca to avoid having to do their mind-numbing work. All those at the lower end of the food chain are screaming for release from their regulatory prisons, even if they don’t know it.

As Michael Palin’s government spook Jack Lint so adroitly illustrates, the comfort of bureaucracy comes in being able to avoid responsibility for one’s own actions, even as he ends up torturing and killing an innocent man: “Information Transit got the wrong man. I got the right man. The wrong one was delivered to me as the right man. I accepted him on good faith as the right man. Was I wrong?” This, in many ways, represents the true danger of bureaucracy as depicted in Brazil – when everyone can pass the buck onto someone else, what responsibility do people feel to change the system? Sure, there are wan, likable rebels like Robert De Niro’s municipal terrorist Harry Tuttle and Kim Griest’s Jill Leyton, but they’re easily forgotten aberrations in the endlessly churning gears of Brazil’s machinery.

The complicated story of Brazil’s release is almost an exercise in the same kind of bureaucratic, dehumanizing control under which its characters must live. When Gilliam tried to release it in the States, Universal (who handled the distribution) thought it tested so poorly that they forced Gilliam to release a shorter version to give it a happier ending. Instead of Sam Lowry’s triumphant escape from the city with Jill being just a defeated, desperate retreat into his own destroyed mind, the “Love Conquers All” version (as it would be colloquially known), removed the edge from that ending. Gilliam, ever the dreamer, refused to accept this: he snuck film students and critics into secret screenings of his intended version of Brazil. Only when it won Best Picture at the LA Film Critics Association awards did Universal agree to release the original version. Even if Sam Lowry only found freedom in his own dreams, Gilliam at least got to share his with the world. 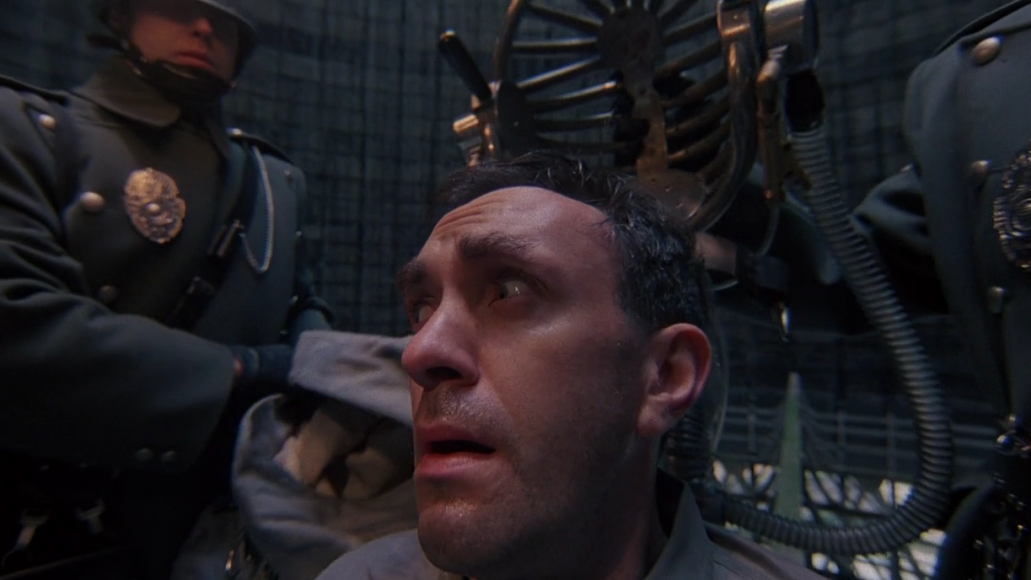 Thirty years later, it’s tough to say just how germane Brazil’s criticism of governmental bureaucracy fits in. Some might say it perfectly encapsulates the endless grinding of individuality under the heel of an ineffectual, yet overly interventionist government; others might say Gilliam’s depiction of bureaucracy applies more to the severity of the Thatcher era than to modern-day, deregulated America. However you feel, Brazil makes everyone hope for a world in which people are free to live, dream, and dissent. After all, as Harry Tuttle would say, “We’re all in this together.”