It’s two days before Christmas, and Taryn Miller is busy getting her life together. She’s visiting her family’s farm in Dexter, Kansas, about a three-hour drive from where she now lives in Lawrence. On January 29th, Gumption, her debut full-length LP under the moniker Your Friend, will be released on Domino Records. In addition to her musical career, she works two jobs, including one gig at a record store in Lawrence. Christmas is one of the only times she gets to slow down, catch her breath, find some peace.

“I push myself pretty thin,” Miller says. “I thrive on that, working two jobs a day then going to rehearsal. That’s just how I operate.”

Early in our phone conversation, Miller notes how one of her favorite parts of working in a record store is being able to pick a record from a stack just based on the cover or name, without knowing any back story about the artist and falling in love with the music. It’s something that’s becoming harder for people to take a risk on, she says, with the rising price of vinyl and more accessible information about artists online. As a music nerd, she loves digging through websites and blogs to find out as much about the artist as possible, from their history to other projects so she can find things she may have missed. She doesn’t decry the practice, but she also just enjoys the feeling of putting on a record without any preconceived notions and discovering something special. “It’s just this really pure reaction to hearing something, and I really love that,” she says.

Gumption follows Your Friend’s 2014 EP, Jekyll/Hyde, which was self-recorded and later reissued on Domino. This time around, Miller is excited about participating in the album cycle, from filming music videos to taking press photos to recording in a studio for the first time. The record was laid to tape at the Rare Book Room in Brooklyn, where she worked with producer Nicolas Vernhes. She’d been in studios before, during her time in a hardcore band as a teenager and at an internship just outside Wellington, Kansas, but she’d never brought one of her own projects into one; she tracked her EP in a house in Lawrence with her friend Jordan Geiger of Hospital Ships.

“This was my first time actually working with someone on the material,” Miller says. “Having a dialogue, looking at things aesthetically, having the tools to see it through to the end of the overall vision. It was a totally different experience.”

Gumption serves as a marked departure from that EP, expanding beyond the folk sounds of her early work to incorporate drones, loops, and field recordings that give new dimension to her work. This direction is one she’s always been interested in, and she saw Gumption as a chance to push it further. While touring Europe, she got nervous at the London border when an officer asked her what kind of music she made. A friend who was accompanying her told the official, “It’s like ambient folk, but she has this appreciation for the avant-garde and tries to incorporate it when she can.”

“He had a point,” Miller says. “When I strip down the songs, looking at the way they move with progressions, I guess I write folk songs. But I do have this appreciation and desire to veer off from that, and I have for a long time.”

As a record store employee, Miller’s appreciation of and obsession with music runs deep. Talking over the phone, she recounts her experiences having “grip sweats” – a term her shop uses for people whose hands shake with excitement when they buy records. Among her recent favorites, she lists experimental European artists Colleen and Musette. Her musical idols include Leyland Kirby, whose work as The Caretaker has a noticeable influence on Gumption, with its haunting use of loops and field recordings that recall distorted memories. Miller also owns almost every William Basinski record, the ambient musician to whom she reached out for advice before embarking on the LP.

“He just seemed to me to be this enigmatic, otherworldly kind of human,” Miller says. She was nervous to contact Basinski, as one often is at the prospect of getting to know an idol and possibly being disappointed, but was relieved when he wrote back in what she describes as a sweet and eloquent response.

“Basically, I was asking him, ‘How do you identify when you’re doing something that you would have done prior to the circumstances you currently have?’” Miller says. “’How do you know the work you’re doing hasn’t been influenced by a market?’ He was very honest and said, ‘You’ll know. You’ll know because it will come from you.’”

When Miller delved into the recording process, she pushed beyond her limits, working to move beyond her usual approach of writing songs specifically for the purpose of playing them live. “There was a point when I sat down with Nicholas and he looked over and said, ‘Let’s just make a weird fucking record,’ and I was like, ‘Yeah, that’s exactly what I want to do.’”

While visiting Dexter last Christmas, Miller gathered field recordings of everyday sounds that she would incorporate into the album. She chased after moments of peace and serenity, recording the sounds of engines, a flowing creek, or the vibrations of a refrigerator.

“What I was doing was archiving moments that I could return to specifically,” Miller says. “It won’t translate necessarily like that to a listener, but they can associate it with their own memories. Sound is so deeply linked to your memory and sense, so I can listen to these field recordings and remember the way I was standing.”

Miller wanted to examine how she could capture these moments and change their identity through audio manipulation. She’s drawn to an idea of detaching sounds from their original state and making them into something that isn’t quite recognizable, but familiar all the same. She focused on the normal, everyday sounds that you don’t pay attention to unless you take a minute to stop and listen. “It’s moving to me, the things that you miss when you get caught up in life the way that I do, always being busy.”

Throughout the recording process, one of the concerns that weighed heavily on Miller was how she would be able to play her new songs in a live setting. She has a history of spontaneity in her solo performances, often changing the lyrics to a song on a night-by-night basis depending on her mood. She’s been working to rein that in as she plays now with a full band. A self-described “gear nerd,” she excitedly talks about her live setup, from the drummer running a pad kit through an effects processor board to one friend who worked to take the stems from Gumption tracks so that they could be played with a keyboard rather than having to use a laptop.

“We will not be using a laptop onstage, which I have nothing against because I love artists like Holly Herndon, and the things she’s doing are groundbreaking,” Miller says. “I just didn’t know it was possible for us to do this without a physical computer.”

For her own equipment, she worked to design her own guitar based off of ideas she shared with friend Dave Harrington, formerly of Darkside, whom she describes as her personal “guitar hero.” Miller explains how she added an expression pod to her guitar and mapped it to a pedal so she could take effects from 0 to 100 with the flick of a switch that looks like it could have come from a Mortal Kombat arcade game. Her guitar has three cables coming out of it onstage. It looks like “an Alien vs. Predator monster,” she says.

Once she got to know Harrington, Miller worked up the courage to ask him to play on her album. After six months of emailing back and forth, she jumped on a Skype call with him just before it was time to turn in the record, only to find out that he had just sent her the guitar line he recorded for “I Turned In”, Gumption’s penultimate track. “He essentially took the guitar out of the line, the audio that he sent me, and it’s just his effected guitar, and it sounds like a whale song,” Miller said. “It’s so beautiful. I love showing it to people.” 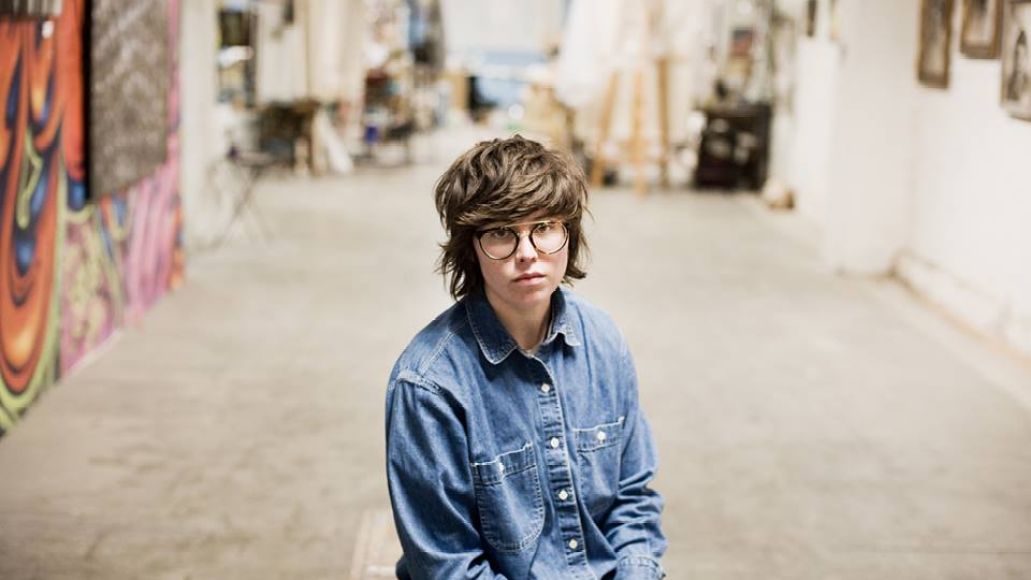 While celebrating the unseasonably warm holiday in Kansas with her family, Miller is able to take the time to decompress before a busy spring that finds her embarking on a US tour with labelmates Alex G and Porches, including a stop at SXSW. At home, she can feel the energy change the minute she pulls into the city limits. As Miller gets ready for the album’s release, she takes time to reflect on how far she’s come, from her early days playing house shows to opening tours for Courtney Barnett. Her early material was recorded under the moniker Y[our] Fri[end], whose brackets made it hard for search engines to pick up. While she remarks that the name was a bit morbid, she doesn’t see it as a “bad tattoo” but rather a sign of growth.

That growth is a clear influence on her lyrical content, which focuses heavily on identity and self-realization. In a standout line from the title track of the record, Miller sings, “No one really ages quite how they envisioned.” She drew that from her own experiences, looking at how much her life had changed in the past few years while also reconnecting with old friends and seeing how much they’d changed as well. No matter how calming her trips back home may be, Miller’s future remains uncertain – and Gumption teeters on that edge between recollection and anticipation.

Chasing Peace with a Band Called Your Friend