When music legend David Bowie passed earlier this week, fans bid farewell — they were sad, but also comforted by the idea that their beloved Man Who Fell To Earth had finally returned to space, reunited with his stars. A beautiful new tribute to the late icon captures this sentiment almost literally.

As DDB Brussels points out (via PSFK), Belgian radio station Studio Brussels and MIRA Public Observatory have teamed up to register an actual constellation in Bowie’s honor. Comprised of seven stars, the constellation is located near Mars, and, so poetically, is in the shape of the lightning bolt found on the cover of his Aladdin Sane album.

“It was not easy to determine the appropriate stars. Studio Brussels asked us to give Bowie a unique place in the galaxy. Referring to his various albums, we chose seven stars—Sigma Librae, Spica, Alpha Virginis, Zeta Centauri, SAA 204 132, and the Beta Sigma Octantis Trianguli Australis—in the vicinity of Mars. The constellation is a copy of the iconic Bowie lightning and was recorded at the exact time of his death.”

Fans can virtually “interact” with the constellation via Google Sky. Here, they can click on any space within the shape to make “stars” of their own. Each of these “stars” features their own personal message to Bowie, as well as their pick of favorite Bowie song. It can be viewed online by other users, and the more “stars” are created, the brighter the constellation glows.

All kinds of tributes have been pouring in left and right for the Thin White Duke the last few days, but now all fans need to do in order to remember their “Starman” is simply look up. 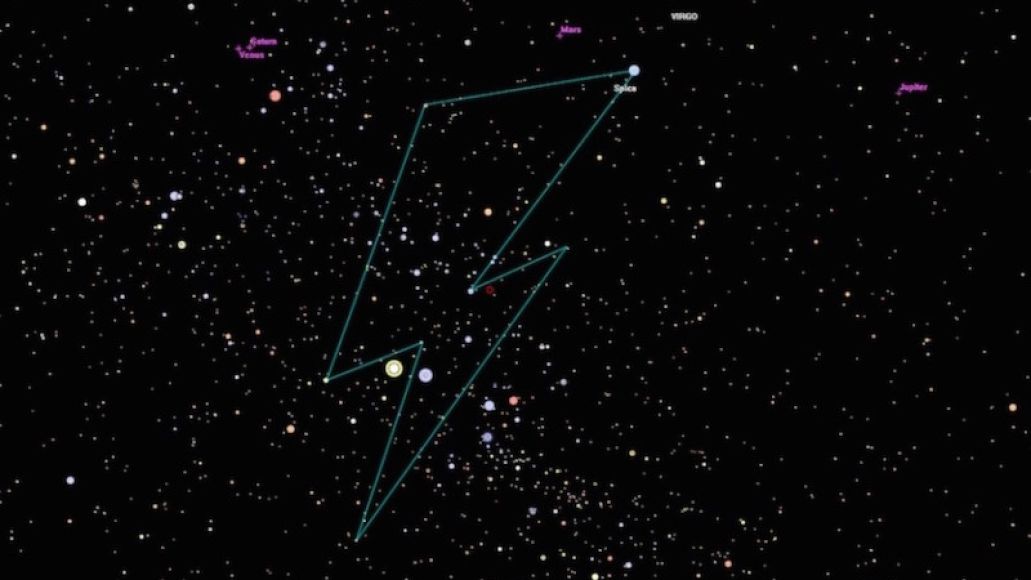 David Bowie honored with his very own lightning bolt constellation