After over a year of hype, Spain’s Hinds have finally released their debut album.  You’d think after all that anticipation and groundswelling fandom, the CoSigned lo-fi indie quartet would want to go HAM for their big record release show. Instead, they did the exact opposite, throwing the kind of party gig they cut their teeth on back in their home country.

Despite less than pleasant past experiences with getting to the States, the band decided to hold the concert at a tiny DIY venue in Bushwick, Brooklyn. Tickets were RSVP only, all ages, $3 at the door, and the line stretched deep around the block for hours before doors opened. Even once they did, the Spanish ladies didn’t take the stage for a good 45 minutes after their supposed show time. The place was packed and the temperature was high, making the wait only more painful. Once Hinds finally got going, however, it was easier to get swept up in the rambunctious, loose energy of the whole thing than to fret about your watch. 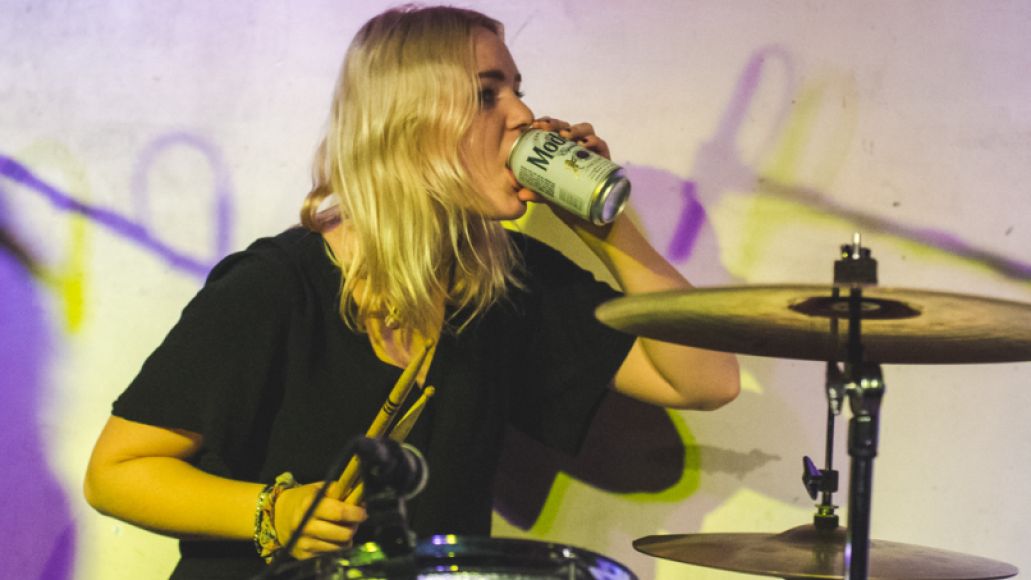 It took the band a few minutes to get into the swing of the show. Frontwoman/guitarist Carlotta Cosials forgot her capo right off the bat, leaving her bandmates to awkwardly smile at the crowd while she went searching for it. They then chose to open with “Warning with the Curling”, a downer tune from their Deers days, and followed it up with “Trippy”, a track from their early Hinds demos. It was a bit of a head-scratching choice for a band supposedly celebrating the long-awaited release of Leave Me Alone, but it quickly became apparent that the setlist was an afterthought.

“Trippy” got the energy going, and by the fourth song (“Warts”), a more youthful corner of the crowd was dance-pushing around and working their way (forcefully) forward. For “Between Cans”, they brought on Public Access TV frontman John Eatherly to play guitar, and it solidified how unrefined this performance was meant to be. Cosials and co-lead Ana García Perrote had to hastily explain the chord progression to Eatherly, as he’d never practiced with them before and only knew the song from listening. Thankfully, as Cosials pointed out, “Between Cans” is one of the easier songs in their repertoire. 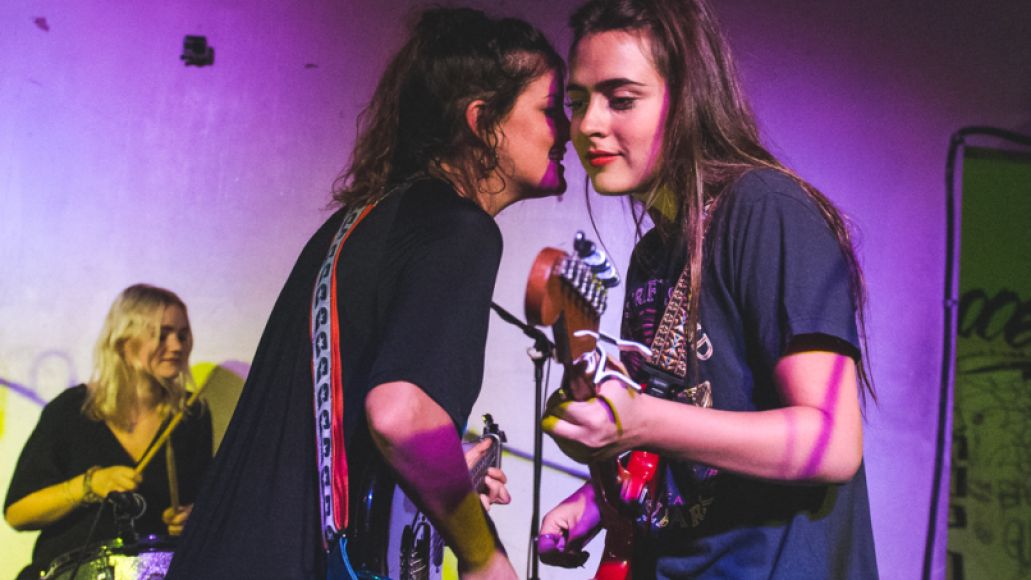 From there it was as if the setlist was thrown completely out. Songs were skipped and revisited later. Halfway through the show, they remembered they’d completely left off one of their favorite tracks, and decided to slip it in anyway. Hinds has established their sound as something endearingly unpolished, and while they’re entirely capable of putting together a crafted, solid set, that wasn’t their intention on this particular night. The girls were there to make merry, not to impress the crowds to make a name for themselves.

Besides, with this crowd, their names were already made. Even Shamir proved to be a megafan, coming out to play guitar and sing backup on the penultimate song, “Garden”. Fans were tweaking out up front to the point where moving away from the spot I’d claimed for taking pictures was impossible until during the pre-encore break. Once the encore came, those most excited were given the chance to jump up on stage and sing along with the band for their choice of three songs. It turns out Cosials used to work as a karaoke bar MC, and she showed off her hosting skills by calling out the names of the first two to take the stage — the same two, incidentally, who had made their presence so clearly known to anyone in their way as they forced their way to the front of the crowd earlier in the set. 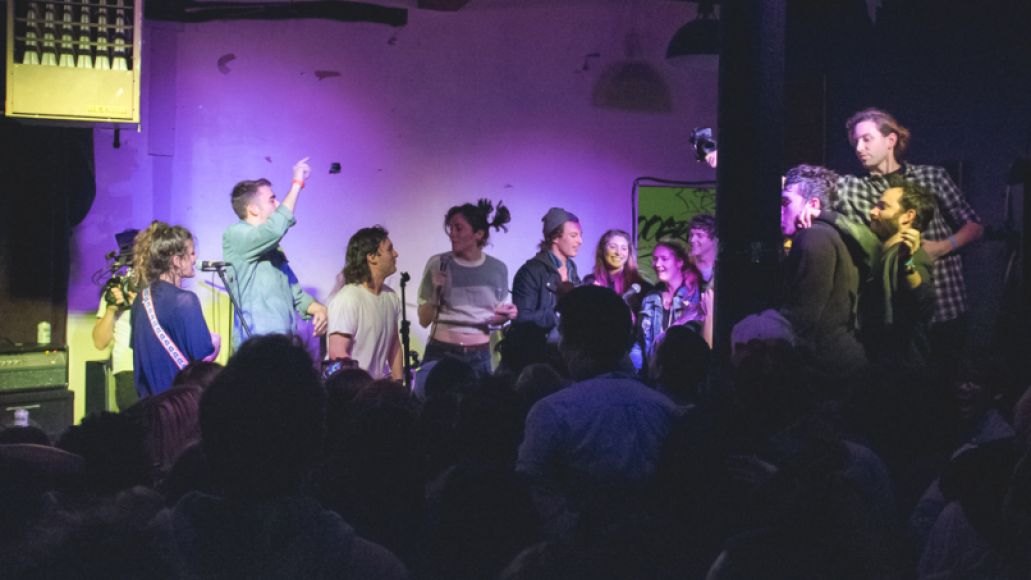 Of course, none of the people who jumped up there could sing, half didn’t know the lyrics, and they were all singing songs that the band had already performed. Add that to the fact that jetlagged and sick bassist Ade Martín, who had arrived just the day before, a full week after the rest of the band, was forced to leave the venue before the encore and was replaced by Eatherly, and the finale felt nothing like a concert. Like much of the night, it felt like the kind of haphazard, sort of crummy, totally fun “show” your friends’ band threw in their parent’s basement back in high school. The kind of event where everyone got more than a little sweaty, a little buzzed, and somehow all got up on stage for that big closing number (in this case, “Davey Crockett”).

The packed house had thinned considerably by the end of the night, to the point where if you managed to wiggle your way out of in front of the stage, you felt a rush of cool air and could walk slowly and freely about the place. Immediately after they finished performing, the band beelined through that open space and began signing autographs behind the merch table. The wild fandom of those crawling up on stage and rushing to get the girls to sign their vinyl was a reminder Hinds is indeed a legit band enjoying a ton of hype right now, and not that go-nowhere hometown band from my younger days.

Over and over again, Cosials and Perrote told the audience that this was not a gig or a concert or a show in the typical sense; this was meant to be a party. Curiosity over why they hadn’t selected a larger venue with better sound and more comfortable space dissipated once you accepted that they wanted this night to feel more like a house party than any sort of album promotion. Yes, the sound was crap, the set was slipshod, and the young crowd was rowdy, but that’s exactly where Hinds feels at home, and there was no way more suited to celebrate their big day. 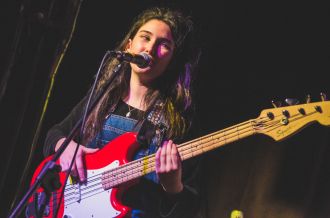 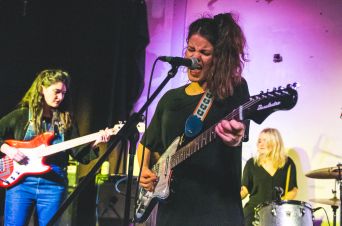 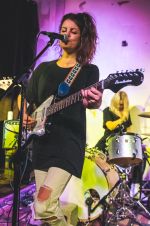 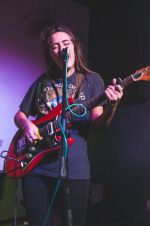 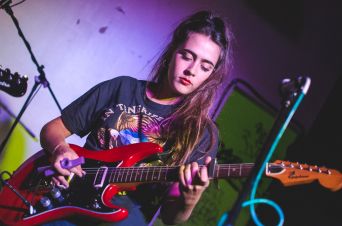 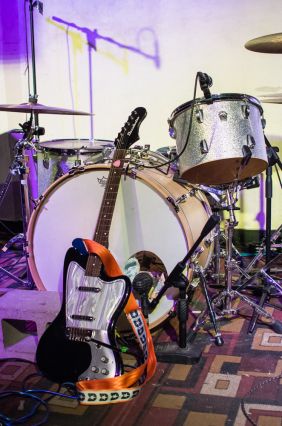 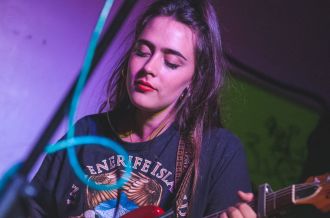