It’s never a dull day at the Jack White news desk, even as the musician himself appears to be on hiatus following his lengthy Lazaretto world tour and the release of The Dead Weather’s Dodge and Burn. Today, Third Man Records has detailed the latest package for members of its Vault subscription service, and included is music from two of White’s very early bands.

Less than a year later, White played a handful of shows fronting a band called The Bricks, which featured his future Raconteurs bandmate Brendan Benson. This recording, which has been enchased from the original multitrack masters, features early versions of White Stripes songs like “Candy Cane Children” and “You Got Her in Your Pocket” along with an unreleased track called “One and Two”.

A third live recording captured the Sub Pop-signed, Detroit-bred rock and The Go from November 1998. White briefly played guitar for The Go, and this particular set featured a performance of his own original song “Turn Your Little Light Bulb On”, which “has remained relatively unheard in the intervening eighteen years.”

Each of these gold LPs come in their own custom stylized jacket and are housed in a soft touch telescoping box highlighting the Gold Dollar, the Detroit music venue where all three performances took place. The box is filled with facsimile reproductions of setlists, flyers, band ephemera, and more.

Additionally, the forthcoming Vault package includes a yellow and black 7-inch of The Dead Weather’s Dodge and Burn tracks, “Let Me Through” and “Be Still”. 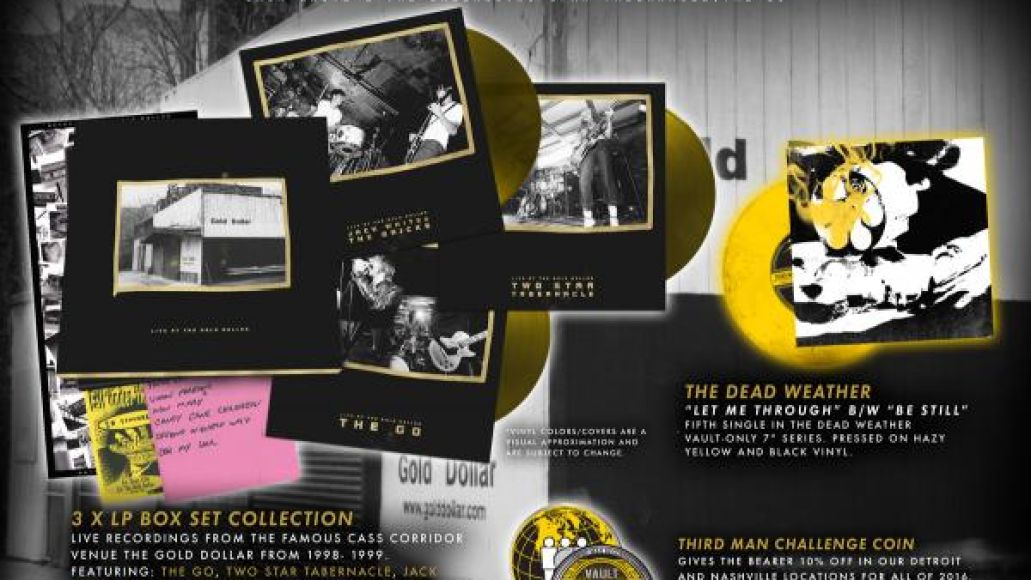