Tragedy is inevitable. It’s a truism of the world, and there are millions of different ways that human beings attempt to deal with this. Some take to drink or drugs. Some make art. Some live their lives fearfully in hopes that somehow the tragedies that find their way to other people won’t beset them if they try hard enough. Some reject the idea that anything could ever happen to them, at their own peril. And some just spend their lives railing against that, as though their Sisyphean effort will somehow be good for bonus points when it’s all over.

If you’re Larry Gopnik (Michael Stuhlbarg), you marvel at the intangibility of everything while repeating the only thing that you can find to say in the face of overwhelming bad fortune: “I didn’t do anything.” A Serious Man, the Coen brothers’ film about Larry and his trials, has just as little regard for this invocation as Larry’s friends, family, and surrounding world. After a prologue set centuries ago in a small Jewish village (more on that later), A Serious Man jumps ahead to Minneapolis in the late 1960s. There, Larry teaches physics at a local college and has a wife, Judith, and two teenage children. They attend synagogue together. Larry is a simple man. He likes his work, and is on the tenure track. He is well and healthy. His life gives him little reason for complaint, outside of the antenna on his roof that can never get the reception of F Troop quite right.

Then the tsuris comes. And as it usually does, it comes in droves. Larry fails a student in one of his classes and is left a considerable monetary bribe by said student for a better grade. The student’s father threatens to sue him both for taking money and for defamation when Larry claims that it was left as a bribe. The head of the tenure committee informs Larry that letters are being written to the college, anonymously, demanding that Larry be denied tenure. Judith wants a divorce, via the traditional Jewish get, so that she might be remarried in the faith to an old family friend. The new couple wants Larry out of their house, so as not to involve the children, and are horrified by the mere suggestion that Judith leave instead. Larry’s brother is in gambling trouble. Larry’s daughter can never wash her hair because of her uncle constantly occupying the bathroom to drain a cyst on his neck. His son has marijuana-related debts to a local bully and may have joined the Columbia Record Club without Larry’s consent. One of Larry’s neighbors is an intimidating hunter with little regard for property lines. And he can’t seem to explain any of it.

Friends and family alike urge Larry to see the local rabbi, and it’s in his three meetings with three different rabbis that A Serious Man finds its true meaning. Like the best Coen productions, this may mean that there is no meaning at all, that life is chaos and that only luck, good or bad, rules the world. In three years, Joel and Ethan Coen made a trio of films on this theme, in wildly different ways. Though all contain multitudes and as such could be read for any number of interpretations, one could read them as commentaries on the seen and unseen and whether anything’s behind anything at all. No Country for Old Men considers a world in which making the wrong choice at the wrong moment is punished with extreme prejudice. Burn After Reading repurposes the spy thriller as an examination of how even the people in possession of the most intelligence (by volume, anyway) know nothing. And A Serious Man invokes a vision of God that could be empathetic, cruel, or entirely nonexistent. Larry isn’t sure which.

The first rabbi advises Larry to shift his perspective. His woes are a matter of perception, it’s argued. Larry needs only to adjust his perspective on his recent turmoil, and he might find that there is always more to appreciate. Even as Larry’s troubles begin to magnify in severity, one could argue that Larry has the exact life that the era promised to all hardworking, middle-class Americans. Another could then argue that Larry’s life is falling apart despite his general decency and another that Larry’s inaction in most aspects of life is what got him into this mess in the first place. There are no answers, only more debates, and more visits to the rabbi.

The second visit recounts, by way of a flashback that stands as some of the Coens’ most lively work, the story of a Gentile dentist who found a Hebrew inscription on the back of a patient’s teeth. It read “help me, save me,” which sent the dentist on a manic hunt to find the meaning of it all. Like Larry, the dentist couldn’t eat. The dentist couldn’t sleep. Without a definitive answer to the mystery, he could never continue life. And yet, reassured that there are no answers, and that sometimes even the most outlandish occurrences have no purpose, the dentist returned to his everyday life. Larry, however, cannot: “Why does [God] make us feel the questions if there are no answers?” For Larry, the natural order is not enough. There have to be answers.

The third and most aged rabbi won’t even talk to Larry, for he’s busy thinking. 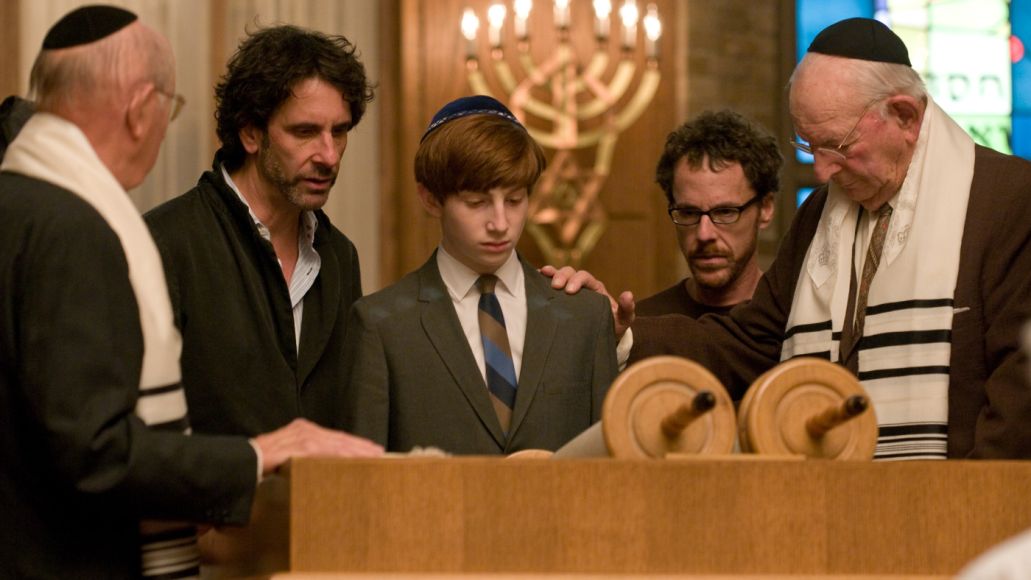 A Serious Man is neither devout nor skeptical; as much as anything, the film is a Rorschach test for the viewer based on their own relationships with religion, or more broadly, the unknown world. Though Stuhlbarg does exceptional work as a man beset on all sides by what some might call bad luck and others the fate of Job, doomed to suffer passively just to prove his loyalty to some higher power, he also serves as a kind of cipher for the endless struggle against the immovable. Larry is the everyman trying to make sense of why everything bad seems to be happening to him, specifically, and all at once. He’s the searcher trying to find answers where none seem to exist. He’s anybody, really.

Though the film was acclaimed upon its release, it’s not often that it’s among the first titles mentioned when people get to talking about the Coen brothers’ best work. And yet, in its small, more unassuming way, it’s both a master thesis for so many ideas they’ve engaged with over the years and one of their most powerful works. It’s as funny a film as they’ve ever made, and yet it could be argued as their most deeply nihilistic as well. It speaks to the optimism of a better tomorrow, particularly through Larry’s son and his climactic mitzvah, even as it posits that all of it could be taken away at any second, if you dare stray off the path. Or even if you don’t. Again, who knows?

Back to that opening prologue for a moment. It’s preceded by a proverb from the medieval rabbi Rashi: “Accept with simplicity everything that happens to you.” The film then goes on to tell the brief story of a husband and wife in their home, after the husband returns from the road, having met the rabbi from a nearby town. The wife, mortified, informs the husband that the rabbi had passed away some time ago, claimed by typhus. When the rabbi shows up, having been invited for dinner, the wife eventually stabs him with an ice pick, convinced he’s a malevolent spirit they welcomed into their home. Bleeding, he takes off back into the night. Maybe they killed a ghost, a dybbuk as it were. Maybe they became murderers that night. But with a simple “Blessed is the Lord, good riddance to evil,” they close their doors and go on with their lives.

To the film, perhaps it’s a statement of theme, a commentary that the line between decency and evil is nonexistent and relative to whoever’s defining it at any given time. Perhaps it’s a parable, as Larry describes to a disgruntled student with respect to the use of Schrodinger’s Cat as an illustration of mathematic concepts in physics. A simple story designed to make clear a series of more complicated ideas. Perhaps they were Larry’s ancestors, and he really is cursed, and he’s being punished for sins committed long before he ever could have existed. A Serious Man has no answers. And there’s more to worry about, with that storm coming.

A Serious Man and the Futility of Salvation