Welcome to All Access, a new feature in which a Consequence of Sound photographer doesn’t just see a show, but gets an inside look at what goes on before the band takes the stage.

Matthew Logan Vasquez never stops. In the last five months, the Delta Spirit frontman has released his debut solo EP and his debut full-length. He’s put together two separate touring bands, one for a three-city Texas residency and another for a west coast tour. Besides a publicist and a booking agent, he’s done pretty much every aspect of the whole album cycle himself. That includes playing nearly every instrument on Solicitor Returns, designing all the album graphics, releasing it independently, handling vinyl printing and ordering, and deciding which stores in which cities would get copies. He was even my onsite contact for this very feature, a task 99.5% of the time handled by some sort of touring manager.

But it’s not just the work. There’s something constant about the way Vasquez operates as a human being.

After soundcheck, he and his band (the Texas residency troupe, whom he flew out just for this album release show) invite me across the street to OTB for drinks and a bite to eat. Vasquez orders a cheeseburger and fries with a club soda; I copy the bassist, Brendan, and get the grilled spicy chicken wings and the happy hour specialty cocktail. As soon as he’s ordered, Vasquez is back outside on the phone with his wife. She’s in Norway with their five-month-old son, Thor. 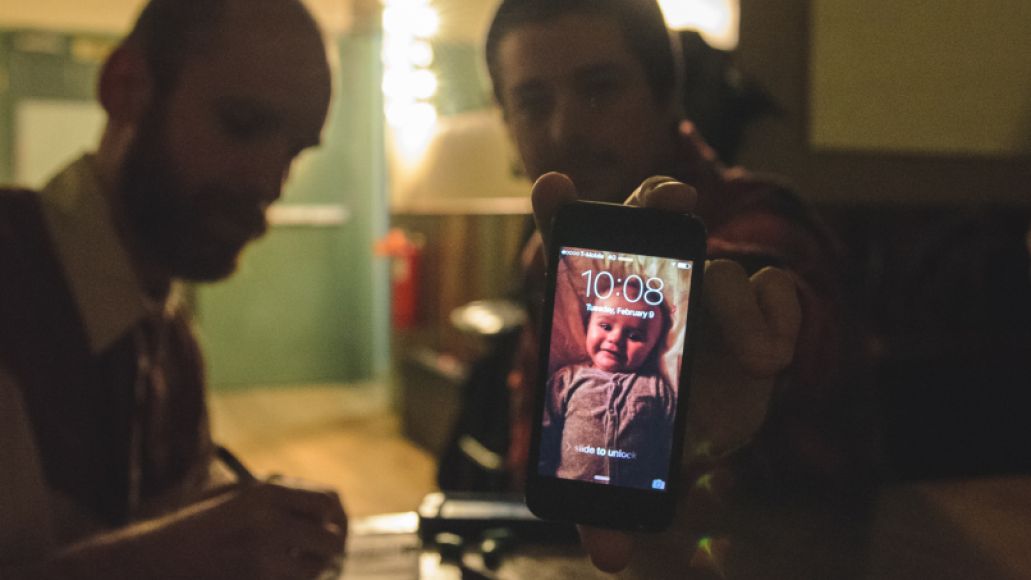 He’s obsessed with his newborn, smiling sweetly as he tells me how much harder it is to leave him for work now that he’s starting to gain a personality and be, as he puts it, “so cool.” He recounts their morning routine: His wife gets up at eight every morning to feed Thor and places him between the two of them in bed once he’s done. Thor will coo and wave around as a baby will do until Vasquez reaches out his pinkie for his son to latch onto. They fall back asleep like this until an hour or so later when Thor punches him in the face and stares at him expectantly, waiting to be played with. I think to myself I know cats who do the same thing. (He’ll repeat this story just minutes later when he meets a friend outside the venue after we leave the restaurant. Not to the friend, though, but to whomever they’re talking to on the cellphone he steals from them.)

Talk shifts to the specific Norwegian dialect of his wife’s island home, generational language loss, and how German accordion music infiltrated Mexican culture via Texas immigrants. I get the feeling that years of touring have given him encyclopedic knowledge of music and culture. After eating, the band goes their separate ways, with Vasquez and drummer Jud heading off to the friends’ apartment where they’re crashing. A former Brooklyn resident, it seems Vasquez knows someone in every neighborhood and on practically every corner. I end up hanging with Brendan, getting coffee, discussing South by Southwest, racism, and his desire to quit beer. He’ll drink at least two by the end of the night. 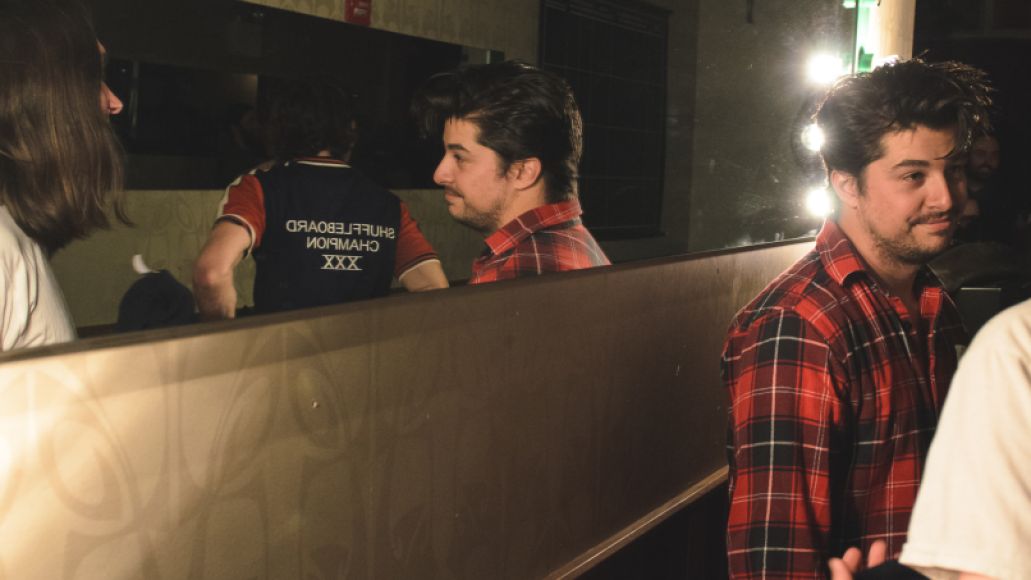 When Vasquez returns to mingle in the Baby’s All Right bar before his set, it’s impossible to tell if he’s meeting people for the first time or the hundredth. It’s the way he treats everyone, making connections out of even the most innocuous high-five. He talks, he eats (again), he says hi to old friends and temporary ones. Even on his big record release night, he refuses to sit still. I have to luck out bumping into him backstage to ask him to sit for portraits. He does so graciously, but as soon as he’s assured I’ve gotten what I need, he’s back out again dealing with things or chatting, all with utter warmth and sincerity.

As the final opener finishes their set, though, there’s a switch. He takes off his beanie, messes his hair in the mirror, and begins pacing the greenroom. He pulls out his setlist, written by Jud on a piece of 5″ x 3″ notepaper, and scans it intently. He slips it back into his shirt pocket as he hugs a friend, only to slide it back out mid-conversation. I’m snapping pictures of this nervous energy, and he kindly tells me that this is game time, so we share a high-five, and I’m into the crowd while he shakes out his arms. 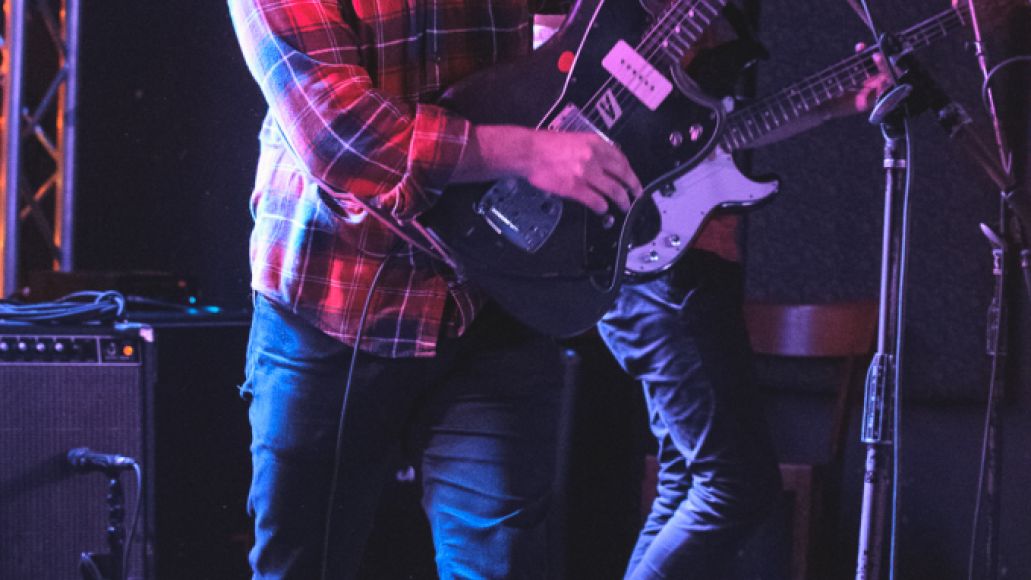 If you’ve ever seen Vasquez perform, you know he belongs onstage. There’s no hint of that momentary anxiety backstage as he’s up their ripping into his new material. He’s all intensity and snarls when he’s performing, smiles and comparatively subdued joviality when he banters. There’s that moment when he head-butts Brendan, and you know he’s having the best time up there. As for the music, “Personal” and “Maria” are clear standouts, but everyone’s loving a bit of “Bushwick Blues” and Middle Brother. “I love playing that song,” he says after “Blue Eyes”. “But not as much as I love playing this one.” That’s when he and the band explode with “Everything I Do Is Out”, perhaps the song that has come from his solo endeavor and perhaps the most fitting song for Vasquez’s own personality.

When the set finishes, Vasquez disappears backstage only to pop up immediately at the venue’s exit, selling vinyl and meeting fans, cheerily taking pictures, signing autographs, and rushing no one. He told me earlier that Solicitor Returns came from writing music unimpeded, remaining loose and letting whatever came out to form fast with little tinkering. He’s embraced a freedom in that, an easy openness that reflects his personality better than anything he’s written before. His music, his family, his fans: He’s enjoying every second of it. Matthew Logan Vasquez never stops smiling. 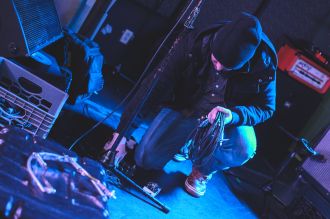 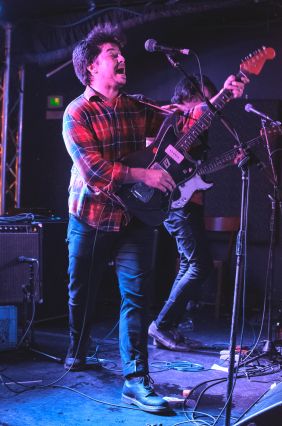 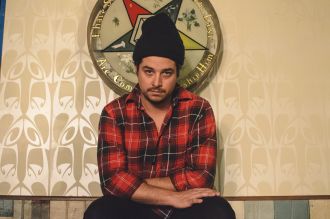 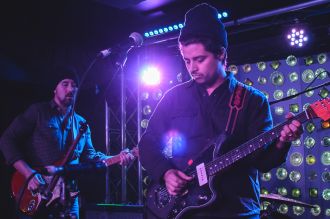 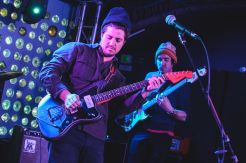 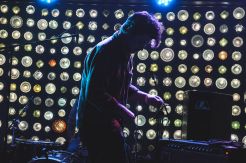 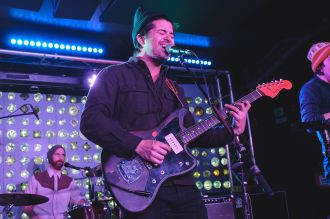 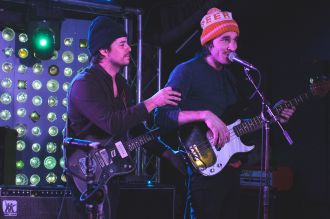 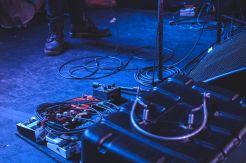 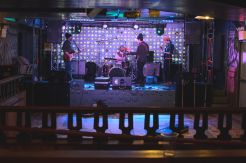 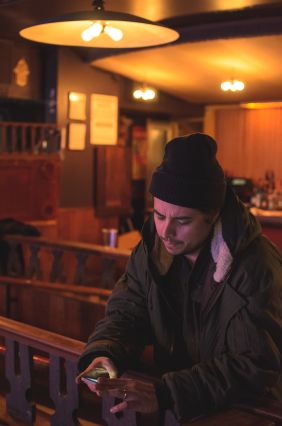 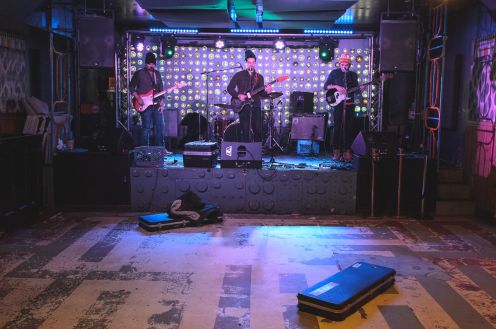 All Access: Matthew Logan Vasquez at Brooklyn's Baby's All Right