Welcome to All Access, a new feature in which a Consequence of Sound photographer doesn’t just see a show, but gets an inside look at what goes on before the band takes the stage.

This two-month gap is the longest PUP have gone without playing a gig since the band’s inception, frontman Stefan Babcock tells me as we meander through Greenpoint. The Toronto punks have been laying low after dropping off Modern Baseball’s bill last December because Babcock needed to recuperate from a vocal cord injury. Since that intense tour in support of their S/T, each band member took some time to do his own thing. For Babcock, that meant traveling to South America and attempting to hike to the southernmost part of the continent, only to be stymied by a freak snowstorm midway through.

If you’re familiar with the band’s debut album, then you know “Yukon” was inspired by one of Babcock’s similar treks into the wilderness – definitely good inspiration for a future song, he agrees with a laugh. But first thing’s first: PUP officially revealed their sophomore record, The Dream Is Over, due out this spring. Over dinner before their gig, the band dished on the new music and everything from Ted Cruz to the place where the band members reverently insist: “This Is Where God Lives.”

When I arrived at Saint Vitus, guitarist Steve Sladkowski greeted me. He suggested getting something to eat, so he fired up Yelp, and we ventured into the frigid NYC night. The first restaurant ended up being a bit too fancy for PUP’s tastes, so after Irish exiting, we settled on a burger spot. A round of Catskill IPAs was ordered, and the band settled in to tell me more about the new LP. 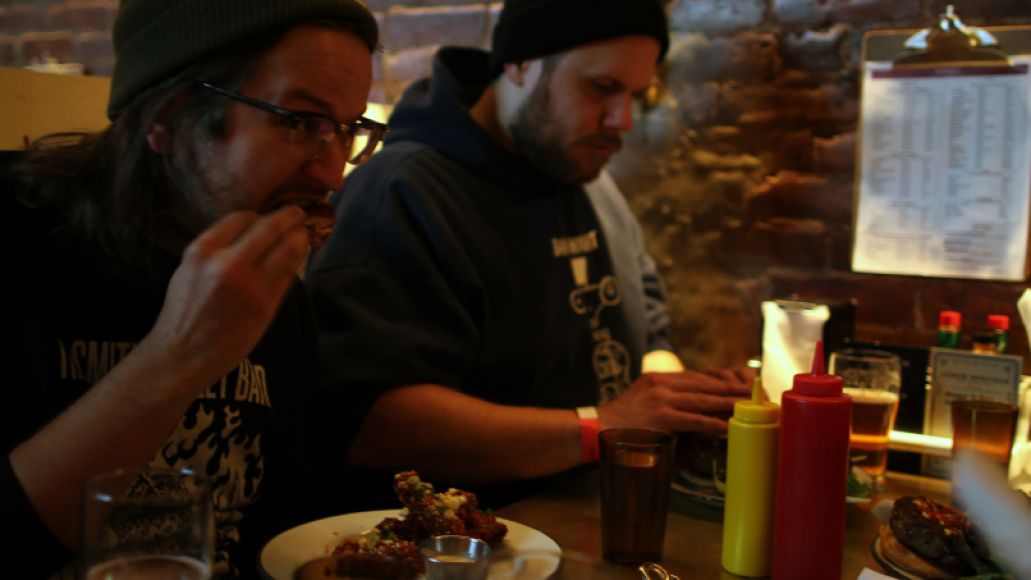 Inspired by their travels on tour with bands like Hard Girls and The Smith Street Band, they recorded in Toronto with producer David Schiffman again. PUP sought to maintain the ethos of their S/T – where the band recorded together in the studio with their touring instruments – for the rawest sound to match their kinetic live shows. Only this time around, with a little more money in the bank, the band sprung for nicer equipment. And Sladkowski says the experience on the road has been invaluable for developing the band’s chemistry.

“I think a big thing we were trying to tap into is how heavy our live shows have become,” drummer Zack Mykula says.

Babcock says the genesis of songs range from riffs brought to the band by bassist Nestor Chumak or lyrics he’s written, but it’s ultimately a “collaborative experience” where the inspiration most often doesn’t resemble the finished product.

“I think we’re all neurotic in a similar way,” Sladkowski adds. “We’re always tinkering, which can be aggravating because you don’t always have your ideas stick.”

The level of perfectionism behind the scenes in recording provides an interesting contrast to their boisterous live performances, which feel improvisational and loose. With PUP, their music is all about controlled chaos.

“We try to be dynamic regardless of how heavy we want to be,” Mykula says. “So there are definitely peaks and valleys.”

Those peaks and valleys are evident even within their most recent release, “DVP”, with the furious slam of the drums and the chugging riffs buoyed by poppy background harmonies. If that song is any indication of how eager people are to hear more music from PUP, this new release will be huge. (In the past few weeks, the single racked up over 130,000 listens on SoundCloud.)

“Honestly, I don’t think any of us expect to be Mick Jagger,” Sladkowski says. “The fact that people are excited and are anticipating this record is really humbling.”

With doors about to open, we decide to head back to Saint Vitus. On the way, the band stops at a bodega – the amazingly named God Bless Deli – to pick up beers. (The consensus pick is Oskar Blues Dale’s Pale Ale.) Downstairs at the venue, a chocolate frosted cake (with white icing reading “She says I drink too much!”) awaits the band. 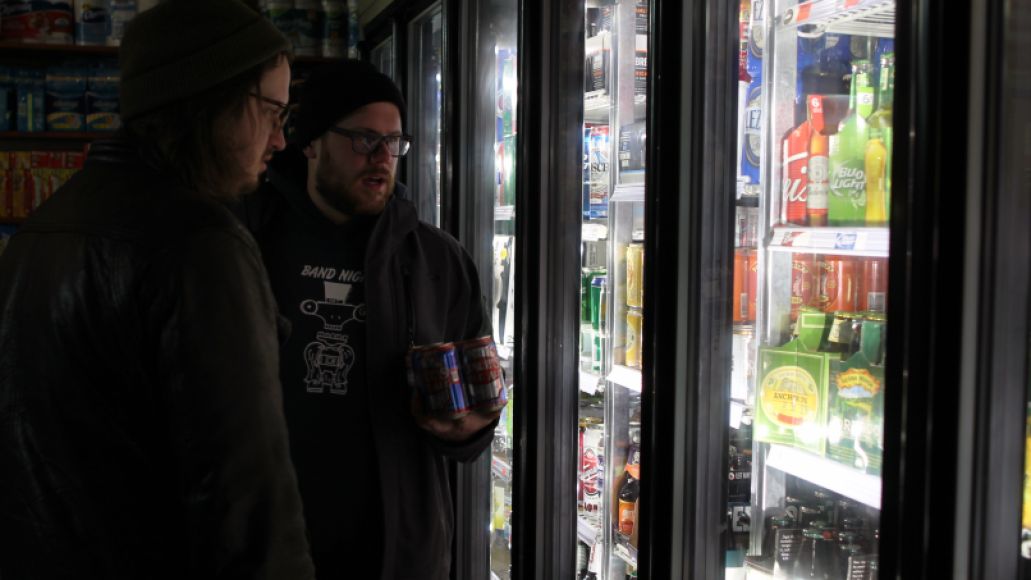 The persona the band present in their music is often raw and tough, but in person the guys couldn’t be more polite or friendlier. The two openers, Pkew Pkew Pkew and The Superweaks, filter through and shoot the shit with the band for a bit. As show time nears, Babcock pulls out a notepad and drafts the setlist. He passes it to Chumak, who nods his approval. But Mykula objects to one of the song progressions, so Babcock goes back to the drawing board. Above, the sold-out crowd is beginning to stream into the venue.

“Playing Saint Vitus tonight – that’s the PUP vibe,” Babcock says. “I feel most comfortable when I can feel people’s sweat flipping off their bodies onto me when I’m singing.”

“You wanna taste the room a little bit,” Sladkowski adds.

When the band finally emerged to the packed crowd, the set contained three new songs: “If This Tour Doesn’t Kill You, I Will”, “My Life Is Over, and I Couldn’t Be Happier”, and “Doubts”. Before PUP ignited an hour of sweaty, nonstop moshing, Babcock explained the meaning behind the record’s title. After consulting with a doctor about his voice, he was told that he might not be able to sing again. The Dream Is Over.

“But the dream is not over,” Babcock yelled. “We’re fucking here!” 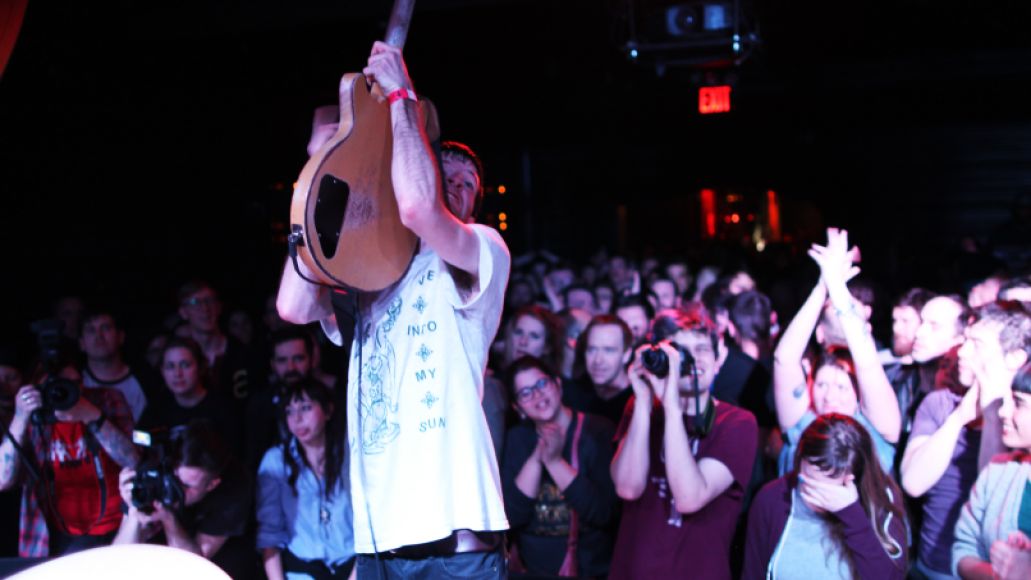 “DVP” was a furious two-minute blitzkrieg with over a hundred fists pumping in unison to Babcock’s anthemic declaration, “I fucked up and she hates my guts!” From the melodic breakdown of “Dark Days” to the raucous riffs of “Guilt Trip” to the sprawling soundscape of “Yukon”, PUP traversed the peaks and valleys of their varied sounds. After “Yukon”, Babcock turned back to Mykula: “We need to play ‘Factories’.”

The crowd surged forward, a sweaty mass that roared along to the words, then moshed to the furious instrumental coda. Then, Jeff Rosenstock – fresh off opening for Modern Baseball earlier that night – appeared onstage for “Reservoir”. Rosenstock took over vocal duties, so Babcock launched himself into the crowd, hoisting himself upside down from the ceiling as he was swarmed by a sea of outstretched arms. 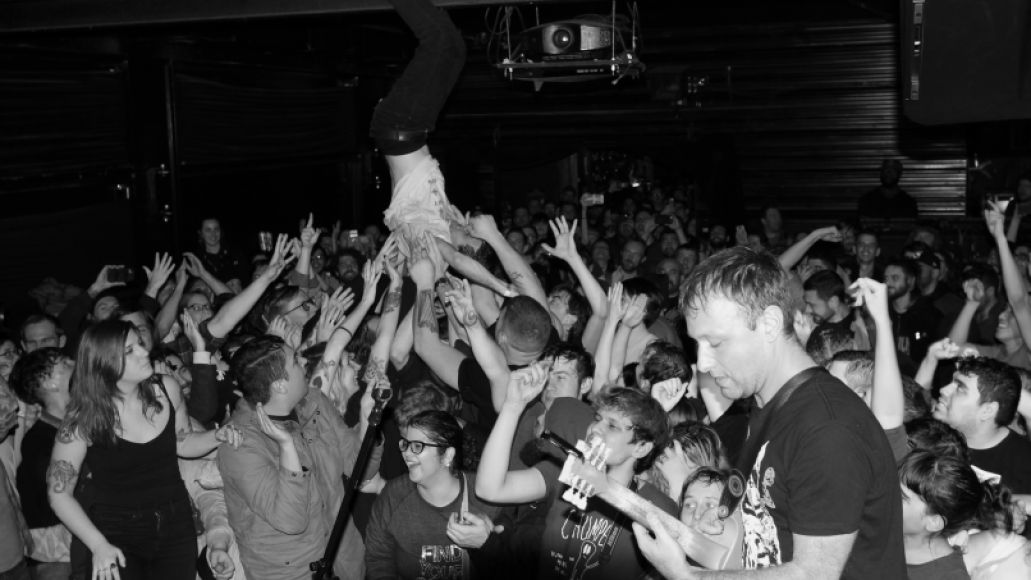 Since the bands enter though the crowd at Saint Vitus, there isn’t the dramatic backstage exit to pull an encore. So the band closed with a cover of Weezer’s “El Scorcho” before disappearing into the audience.

Tomorrow, the band will head to the place “Where God Lives.” I’m sworn to secrecy about its location, but it’s become a traditional destination for the band when they wrap up US tours to journey to a resort outside of a certain Pennsylvania city for some quality R&R. The band’s off again until SXSW, and then they’ll pick up their relentless touring schedule in the spring. When I asked earlier in the night if PUP have any pre-show rituals, Babcock told me that they like to tell each other to “keep your stick on the ice, bud,” which may be the most Canadian idiom I’ve ever heard. The band explained that it means stay focused, keep your head up. Don’t get cocky. For PUP, this is still every bit the same odyssey as it was for the four guys from Toronto who formed the band in 2013.

“We never expect the shit that happens,” Babcock says. “We have high expectations of ourselves, but low expectations of whether people are gonna like our band and our music. I wonder how we’ve tricked so many people.” 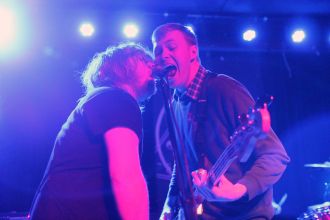 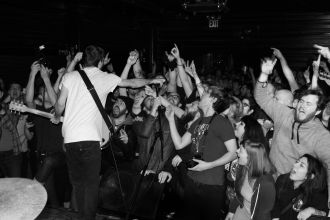 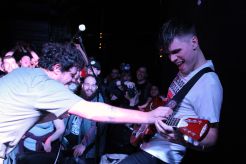 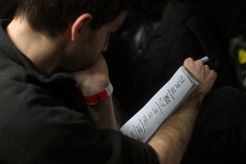 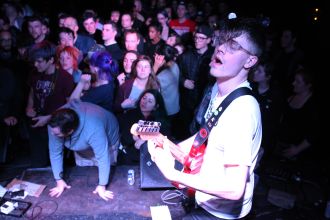 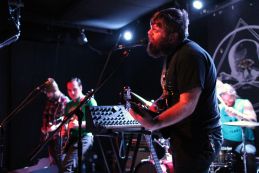 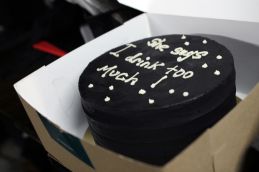 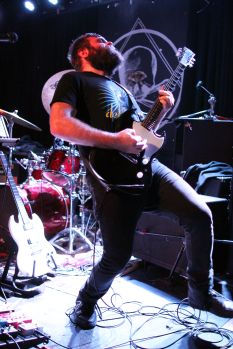 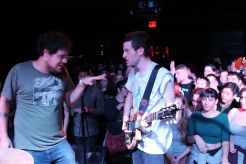 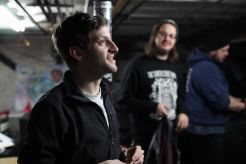 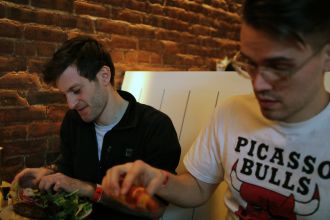