Britpop is a genre that’s often associated with noxious accessibility, so artists who get stuck with that label tend to flash a middle finger at anyone who would dare say it to their face. They may not be British, but Newtown, Australia trio DMA’s still know what it feels like to be dismissed as “Britpop.”

Hills End, the band’s debut full-length on Mom + Pop Music, is loaded with melodies that sneer and an energy that’s perpetually in a state of becoming. Each track grows within itself, and each is liable to end more intensely than it starts. On lead single “Too Soon”, the band embraces Britpop’s signature electric guitar tingle, only to soak it in a stormy pre-chorus lurch that jumps unapologetically into an overdriven, anthemic refrain. This may sound slightly familiar, but it’s nonetheless captivating.

Other tracks on the album feature the same potent blend of new and familiar. On “So We Know”, vocalist Tommy O’Dell tosses something between ambivalence and sadness into the mix when he sings, “I can’t be certain that they’re pulling the curtain on me/ And if tomorrow’s a burden, then I’m still learning to be.” Lyrics like these betray what many would call DMA’s sweeter, softer side, and they’re a surprising counterpoint to the band’s impassive press photos.

Maybe this shouldn’t be so surprising, as joy and despondency are always closely tied. After all, does something sweet not carry with it the possibility of its profoundly sad or angry lack?

DMA’s most well-known song to date, “Delete”, houses all of these qualities simultaneously. There’s a toughness that isn’t quite cold, a catchiness that’s wry and self-aware instead of grating. Then, of course, there’s the frustration of loss. “Don’t delete my baby,” O’Dell sings in the chorus, and you kind of start to get it. Later on the same track, he croons, “You know that I belong to be/ Reflections of myself/ Let it all out.” Reflections represent an image, but they can never be that image. There’s always the underlying notion that what’s being reflected is impure, slightly off, or flipped around.

The flipping doesn’t stop; Hills End marks the moment in DMA’s’ career when the “Britpop” label starts to fall by the wayside. When I tell the band’s guitarists and principal songwriters, Johnny Took and Matt Mason, that the new album complicates their distinction as a Britpop band, they sigh in relief. “It’s not something that bothers us that much,” says Took over Skype, “But we know that there’s so much more going on [in terms of] what we’re inspired by.”

As they walk through a map of their influences, this becomes even clearer. “I grew up listening to Springsteen … and The Band, stuff like that,” Took explains. “And then eventually I started getting into the Verve and Oasis … but I don’t even think Mason heard of Oasis before joining the band.”

Though the Britpop comparisons wear as the trio matures, they don’t seem like the type of people to wholly miss the validity of such comparisons. “If you’re Australian, you definitely have to pick which accent you sing in,” says Mason, implying that British and American are pretty much the only options. “There are bands — like Courtney Barnett does sing in an Australian accent — but it’s difficult to get away with,” he says. “It’s not particularly musical, as you can imagine. We don’t sing in an Australian accent.”

The three core members of the band are still in their mid-20s and played around Sydney for years before coming together as DMA’s. As Took jokes, “We kind of realized there was no point gigging every weekend in Sydney. There’s only so many venues, and your friends will only come to so many gigs.” 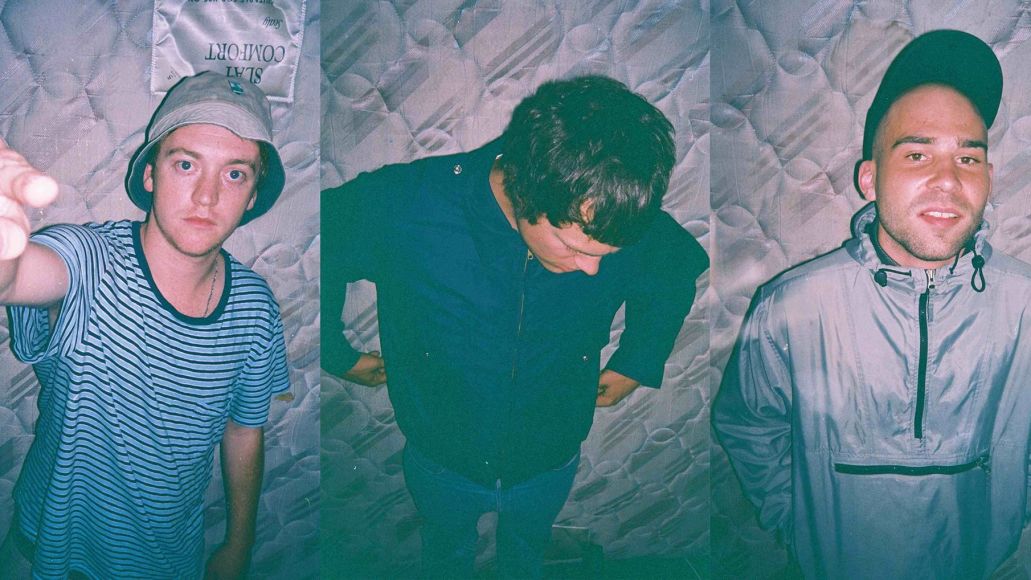 While O’Dell and Took were in a psych group for a number of years, Took and Mason actually played bluegrass together before they all started writing music as a unit. “We pretty much wrote for three years,” recalls Mason. “We didn’t really feel the need to play live. It was kind of just a recording band.”

But now, with some international hype generated by the self-titled EP they released last summer, DMA’s are ready to get on the road and play their new material. “We’ve released two singles, and it’s [already] made our live set better,” reflects Mason. “You can tailor the set to a point where people actually know the songs … I’m excited to see how the live shows will be received once the album’s been out for a little bit.”

Though the stony image DMA’s present in photographs occasionally bleeds into their music, they seem to deftly manage tension and release both in their music and in their modes of being. A few times during our conversation, Mason tips back a wine bottle and communicates through his body language that he might be done talking.

But other times, he and Took excitedly connect with me over a number of random topics: their visit to the Philadelphia spot where Kurt Vile shot the cover of Wakin on a Pretty Daze; their love of that new song by Whitney; and their admiration for Pete Drake’s steel guitar vocoder setup, to name a few.

Toward the end of our talk, Mason cordially floats out of the frame to a nearby upright piano while Took laughs, turning the camera around so I can watch the scene unfold. As Mason plays, he continues to shout at me from across the room, blissfully unaware that Took and I are already in the midst of a goodbye — the endearingly awkward kind so often associated with video chat. Once he finally gets the message that our conversation is drawing to a close, Mason waves at me appreciatively from across the room.

Before signing off, Took fills me in on some of the band’s upcoming plans. “Our main focus is getting over to the States and Europe and all that jazz,” he says. “We’ve seen so many bands that never leave Australia. It was a conscious effort [for us] to get this stuff overseas.” For emerging foreign bands, American tours sometimes cost more than their worth. But DMA’s seem hopeful, and they have good reason to be. Now that they’re armed with a dynamic set to match their dispositions, Took, Mason, and O’Dell know they have a big year ahead of them.