Our film staff counts down to this year’s 88th Academy Awards ceremony, which takes place on February 28th, by revisiting some of the Best Picture nominees that time forgot. Today, Blake Goble revisits Ernst Lubitsch’s touching charmer, Heaven Can Wait.

Martin Scorsese, that professor of cinema, has always been a great resource for film art and the renewed experience of great, old works. The preservationist has made it a mission to save cinema at every opportunity. Scorsese’s discussions, lists, and docs are nothing but spectacularly immersive and profound, and his multi-formed syllabi are often cheaper than a course at NYU. Follow this man and you will see wonderful things, present and past. So it’s as a typical film dweeb that this writer admits he first saw Ernst Lubitsch’s Heaven Can Wait while Martin Scorsese did a live Q&A after the film at last year’s New York Film Festival. Lubitsch.

His stump speech may have been sweaty and impassioned and rambling and all that good stuff, but simply put, Heaven Can Wait was a revelation. It’s rare to feel so wholly and emotionally satisfied by a movie, where you leave in a better mood and ask anyone willing to listen, “Have you ever heard of this wonderful movie?” Having not yet seen Lubitsch’s work and knowing Don Ameche only from The Bickersons and Trading Places, it’s a small wonder to be able to see a film with few to no preconceived notions and leave it more complete, happier, and deeply in love with the art of film.  Better late than never. 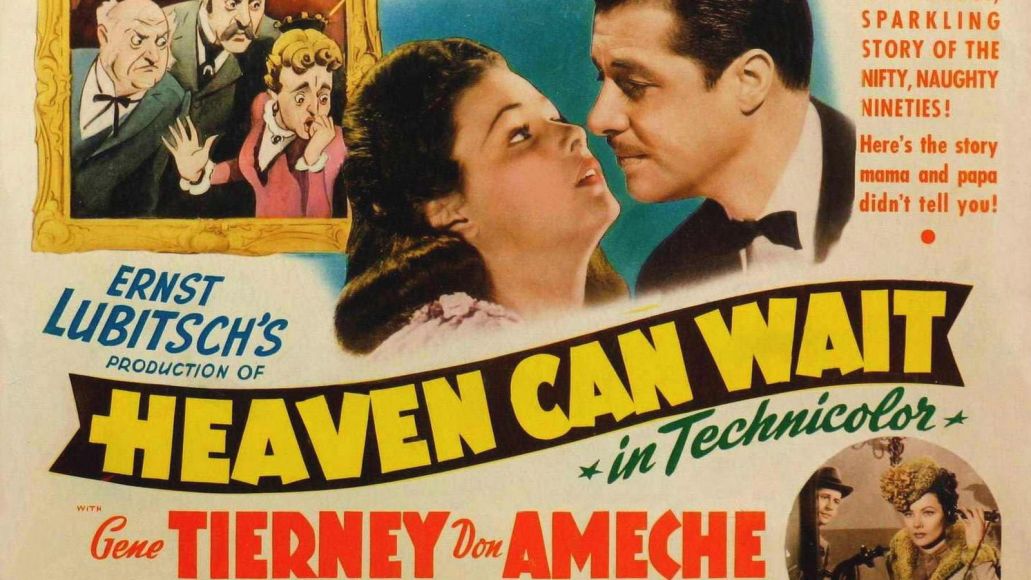 Lubitsch’s comedy of manners, life, and death has had a healthy life after its initial release. It’s been revived time and again and even got a Criterion release in the mid-2000s, but it’s not regarded in quite the way one would look at The Best Years of Our Lives or Gone With the Wind were you to compare it against the esteem and status of Oscar winners from its time. Mrs. Miniver won the gold statue in ’43, and it’s about as stuffy as you can get for an Oscar winner. Greer Garson’s tops in it, but it’s about as wartime serious as you can get.

The foundations are a little tricky to settle upon. This story’s been told many times on film. Heaven Can Wait started as a 1934 play by Leslie-Bush Fekete, Születésnap. English translation: Birthdays. There was also a 1938 English version, a play written by Harry Segall, re-titled Heaven Can Wait. A film was made of Segall’s adaptation, Here Comes Mr. Jordan, in 1941. The logline remains more or less the same throughout: man cheerily reflects on the ups and downs of his life.

For Lubitsch’s film, the director told the story of Henry Van Cleve (Don Ameche in a literal and figurative role of a lifetime), a charmer, playboy, and total scamp. The irascibly wealthy womanizer arrives in Hell, only to be politely greeted by “His Excellency,” Satan (Laird Cregar). Hell looked like a slick office in the ‘40s. Hell is for selfish blowhards and true nasties. Cleve’s gracious, polite, and patient, and perhaps a lifetime of mischief has landed him in Hades, but Satan doesn’t buy it. This Cleve fellow seems far too nice for the ultimate Bad Place.

Ameche is pure filmic charisma. With an honest smirk and good manners, he recounts his days as the heir to a vast fortune with a lifetime of frivolity to his name. Cleve wasn’t made to sully his hands working. He was born to party, to lust, to play, to cheat, and to steal (only a few hearts here and there, honest). Heaven Can Wait exists in a good-natured place where passion plays and reckless misuses of money are delivered in such a way that it transcends revisionist perspectives and retains its antiquated appeal. In 2016, Henry Van Cleve would be an undisciplined boy prince, but in 1943, he led a charmed kind of life. The movie spans decades in lavishly decorated Technicolor as the Cleve family bounces in the opulent, lighthearted chamber drama that Henry seems to get everyone wrapped up in. By the end of the movie, you’d pay him to hang with you.

Heaven Can Wait paces with perfection, and every single joke lands (and holds up, for that matter), but the film elevates itself with its kind sophistication in tackling life’s bigger picture. Cleve, regardless of socioeconomic status or lechery, is a man with a believable moral compass and the ability to grow, learn, and only slightly satiate his baser impulses as he ages. Cleve as a youth getting hiccups from hooch and canoodling with the family maid is a joke that works for its escalation, absurdity, and lack of concern for the realities of such a situation. A middle-aged Cleve learns to sustain a relationship only by failing at his relationships: first comes puckish flirtation, then love letters, then the responsibilities that come with long-term relationships. An old Cleve’s flirtations with a young nurse read as harmless, whistful, and mercifully not creepy. While it might be half-assed to excuse all the film’s hooliganism as “just an old movie,” keep in mind Ameche works every scene to maximum delightfulness, and bawdy as Cleve may be, there’s 0% malice in this character, and everything he does is for fun and fancy free.

Every scene rises to either a great punchline or a moment of sincere humanity. Lubitsch has a knack for making sure no scene goes on longer than it must before moving on. He makes characters funny and snappy, but not without purpose or pathos. A blustery rich dad and a preening, jealous friend type play less for caricature and more for whatever a given scene needs for it to work. Billy Wilder was once interviewed by Cameron Crowe for a book about Wilder’s career, and the famed director discussed Lubitsch. Wilder worked with Lubitsch closely, drafting scripts and learning the art of joke- and scene-making, and Wilder apparently bragged that Lubitsch just knew how to build on a gag until a scene could stand no more and needed to re-start. Wilder said Lubitsch perfected “super-jokes” and building comedy, but Heaven shows how Lubitsch could raise dramatic stakes as well. Heaven Can Wait gets to great punchlines or stirring drama before transitioning to new time periods in logical fashion. Cleve’s jealousy of his wife unexpectedly escalates into raw, emotional zones regarding her health at a ball. In another moment, Cleve’s attempts to win back the woman of his dreams conclude, comically, the only way they can: a getaway chase with family members. Lubitsch’s stitching is flawless roller-coaster storytelling.

And Henry Van Cleve has a terrific arc of personal evolution, filled with mistakes and silly bits. Ameche played Cleve as a man trying his very best to be good, even if he’s not sure how exactly to go about it. This was one of Lubitsch’s last films. Lubitsch came to Hollywood in 1922, made a name for himself with his graceful direction, and was a three-time Oscar nominee and recipient of a special Oscar for his contributions. His To Be or Not to Be and Ninotchka are must-sees along with Heaven Can Wait should a primer be in order. 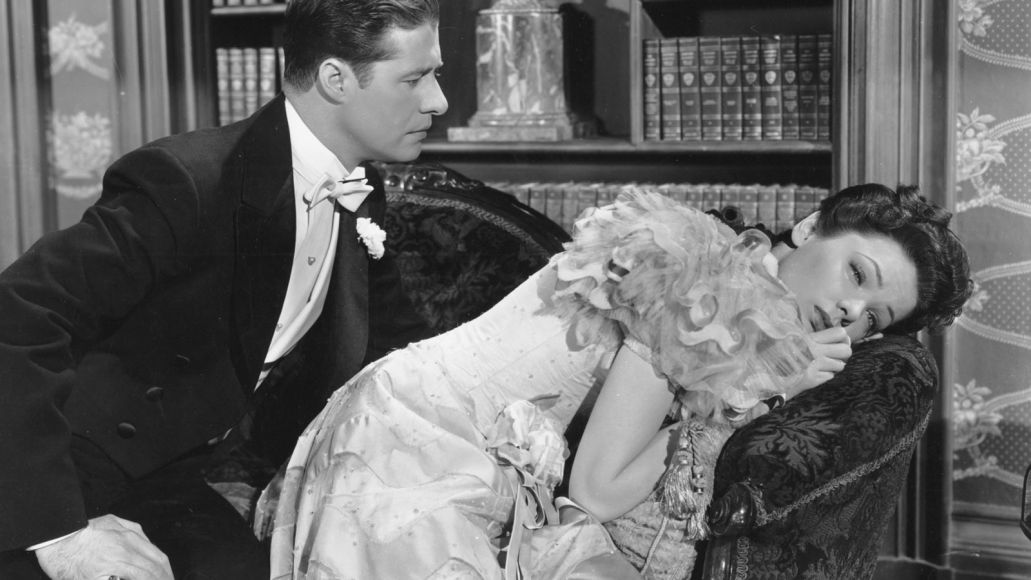 The film’s seen more remakes. 1978’s Heaven Can Wait with Warren Beatty was a Best Picture nominee, but it dates itself in its shallow, disco-era way. And Chris Rock’s Down to Earth had the charisma, but not enough of the charm.

The Academy does tend to equate prestige with “very serious” at times. They’ll nominate a comedy or a musical, but it’s not often you see a film with a lighter touch get nods. Heaven Can Wait is deeper and more meaningful than so many nominees. Life is fun and silly and worthwhile and other Hallmark sentiments, but here it all rings true.

Heaven Can Wait merits masterpiece status as a deft dramedy that beckons for an AFI list ranking, a spot in the Library of Congress’ National Film Registry, or to be deemed notable for such quips like “I can safely say my whole life was one continuous misdemeanor.” Cleve, you devil. If Henry Van Cleve could woo his way into heaven, there’s no stopping Heaven Can Wait from finding the sustained audience it deserves.

So once again: Thanks, Martin Scorsese. And thank you, Ernst Lubitsch.

Heaven Can Wait and the Old-Fashioned Gentleman Devils