Kanye West’s new album The Life of Pablo has been out three days now, but few people actually own a copy. On Sunday afternoon, just hours after he announced the album’s release on Saturday Night Live, Kanye ceased digital sales.

The reason? Ever the perfectionist, Kanye is *still* working on the album. According to a source at Universal, Kanye was not pleased with the audio quality of “Wolves” and several other album tracks and is currently remastering them. He may also alter the lengths of certain tracks.

Kanye’s last-minute tinkering further complicates an already chaotic album rollout. Originally announced for release on Friday, February 12th, The Life of Pablo was delayed after Kanye decided to add the track “Waves” at the urging of Chance the Rapper. The album finally dropped in the early hours of Sunday morning following SNL, only to be pulled hours later. At his request, Universal has yet to send digital download links to 20,000 fans who purchased tickets to screenings of Yeezy Season 3, or to those who bought the album directly from Kanye’s website following its initial release on Sunday (via Tech Crunch).

The few who were able to download the album have since received an email from Universal stating that the album’s “final version will be released in the next several days.” 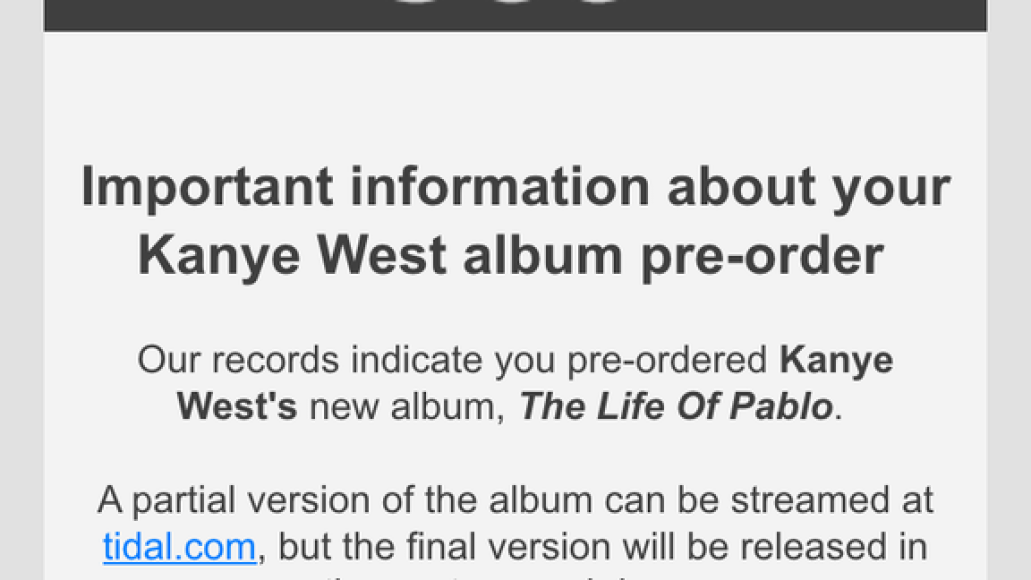 In the meantime, an “alternate version” of The Life of Pablo is still streaming on TIDAL as part of a seven-day exclusive window. It appears the relationship has benefited both parties thus far; TIDAL was the most downloaded app on all of iTunes over the weekend. Meanwhile, “TIDAL is also funding a lot of my scripted content ideas,” Kanye tweeted. “It’s a new day people. More Ultra Light Dreams to be realized.”

Tidal is also funding a lot of my scripted content ideas. It's a new day people. More Ultra Light Dreams to be realized.

Update – Monday, February 15th at 6:25 p.m. CT: Kanye says The Life of Pablo will remain exclusively on TIDAL and never be available to purchase.

Kanye West still working on The Life of Pablo, "final version" out later this week