In between sets, composer Philip Glass mentioned that one of the unique draws for artists to perform at the 26th Annual Tibet House US Benefit Concert was Carnegie Hall. The hallowed Manhattan concert venue once again made for an ideal creative space for its musicians, who transcended generations, continents, and genres. The long-running gig, which aims to raise awareness for and protect Tibet’s rich cultural history, featured a variety of performers, from kora player Foday Musa Suso to rock legend Iggy Pop. As is tradition, a group of Tibetan monks opened the show with a traditional chant, which reverberated through the hall with a similar sound as a didgeridoo, only produced entirely by their vocals. 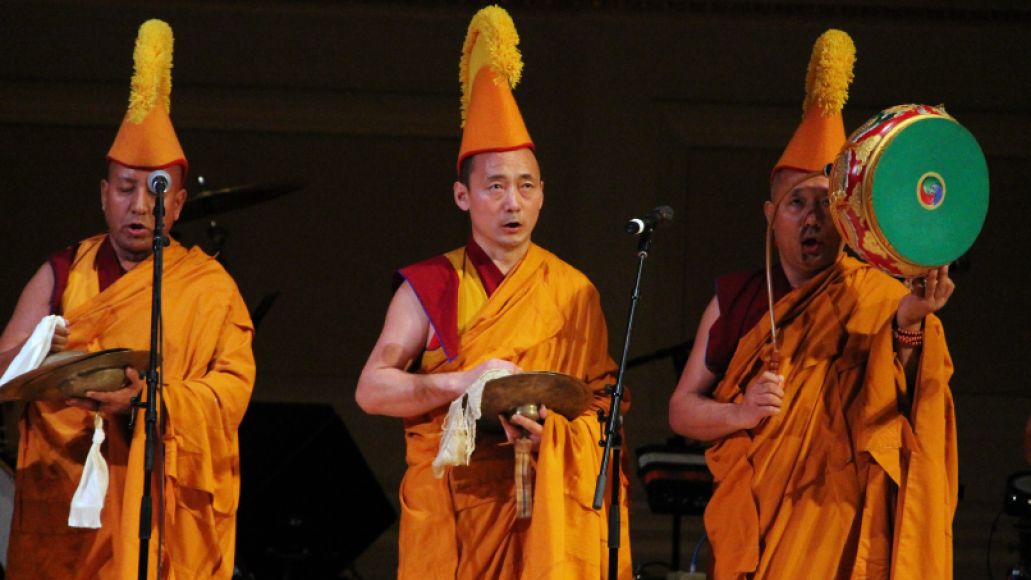 Canadian singer-songwriter Basia Bulat followed, beginning with the mellow ukulele riff and sweet vocals of “It Can’t Be You”. Suso then came after with a collaborative track featuring Glass and harpist Lavinia Meijer. After finishing his second song, “Badigyan”, Suso unplugged his kora and began to walk offstage – only to realize he still had a song left.

“I’m not finished yet,” he said with a grin as he sat down with his instrument again, helping loosen up the crowd with a laugh. 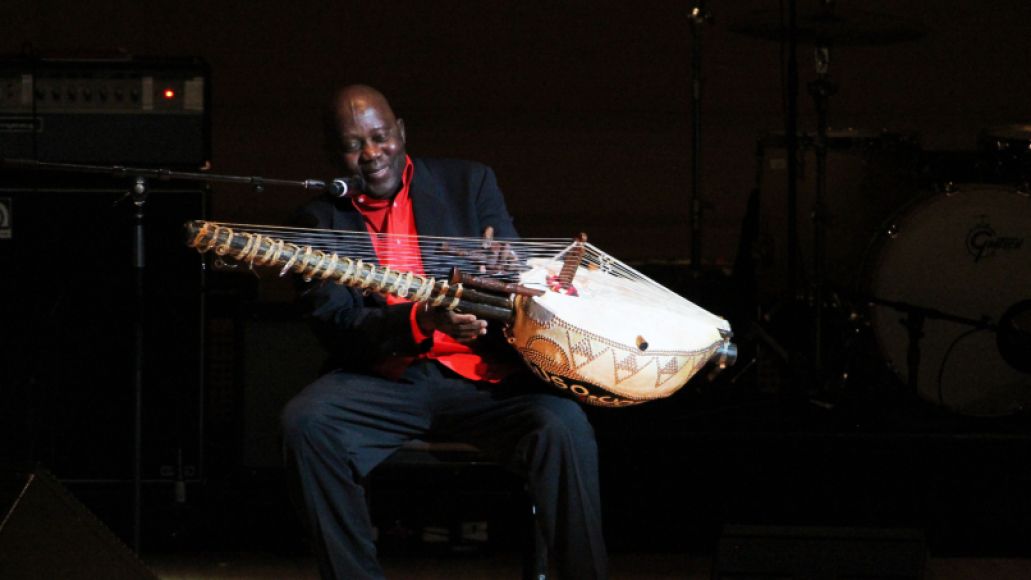 After Suso left (for real), Meijer remained onstage for a performance of “Metamorphosis #2”, a track from Glass’ Solo Piano. Her solo was one of the most technically impressive moments of the evening, as Meijer effortlessly interweaved a deep, dramatic beat with sprightly notes. 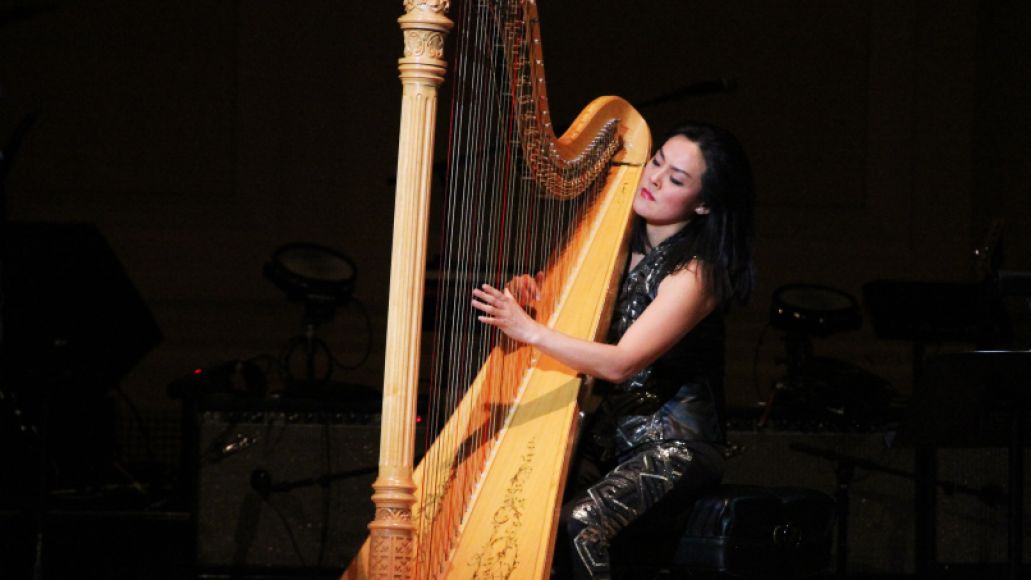 Soul singer Sharon Jones came after, backed by the Patti Smith Band. Jones’ electric stage presence was another highlight of the night, as her powerful voice boomed through the venue on her final track “100 Days, 100 Nights”. As she held the last note of the song, the audience erupted in cheers, with some fans giving her a standing ovation. 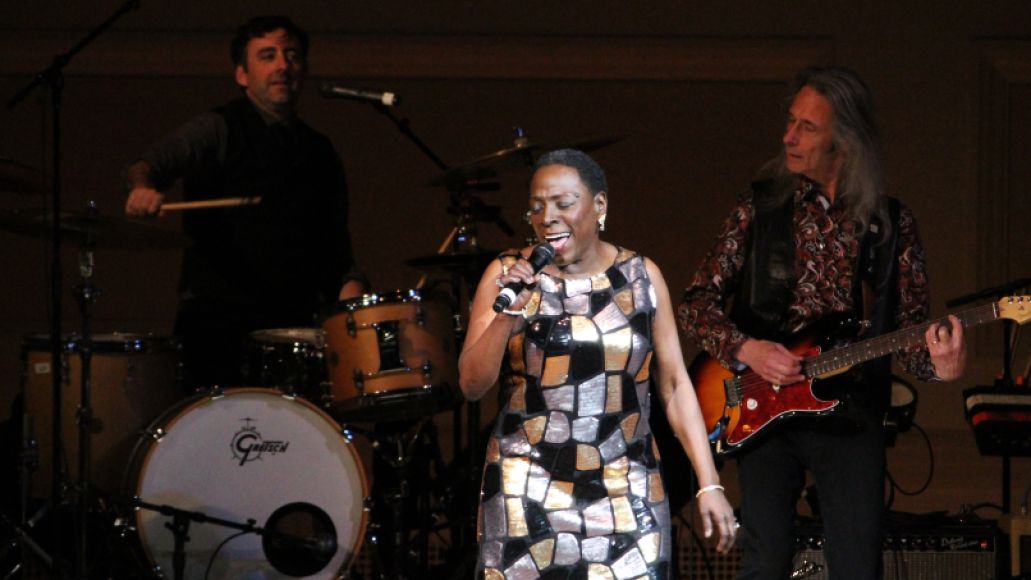 Dechen Shak-Dagsay had a tough act to follow, and the Tibetan singer delivered as her high-pitched croon rose over the dramatic drumbeat and the Scorchio String Quartet on “Everest”. A hallmark of the Tibet House US Benefit Concert is that there’s collaboration among atypical performers, so some experiments were bound to work better than others. Shak-Dagsay’s second song, “Black Tara”, was one of the few missteps of the evening, with her backing band and the string quartet diluting the resonance of her voice.

FKA twigs dazzled next with a minimalist performance of “Hide”, complete with her hypnotic, fluid dance moves. She then gave the live debut of her newest track, the beautiful “Good to Love”. As the track shifted to its swirling instrumentals midway through, twigs bowed. The crowd roared in approval, but she wasn’t quite done. The eclectic singer then dramatically tore off her sash before and swayed with the beat. At the end, she collapsed on the stage, dreamily crooning, “It’s good to love, it’s good to love.” 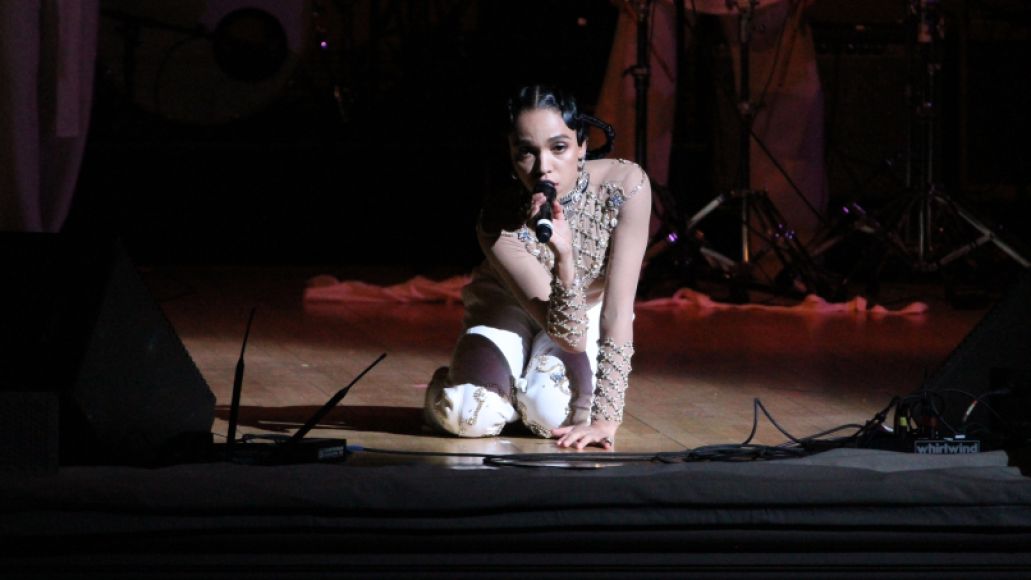 Next, Gogol Bordello ramped up the energy. Lead singer Eugene Hütz and his bandmates initially seemed committed to maintaining the decorum of Carnegie Hall, as they all began by performing seated. But as the seconds ticked by, Hütz kept popping up from his stool, as he kicked his leg and tilted his guitar upward. The New York band did not disappoint the hometown crowd as they finally exploded with movement. Hütz bounded between accordion player Pasha Newmer and violinist Sergey Ryabtsev as the crowd bobbed along to their closing track, “Pala Tute”. 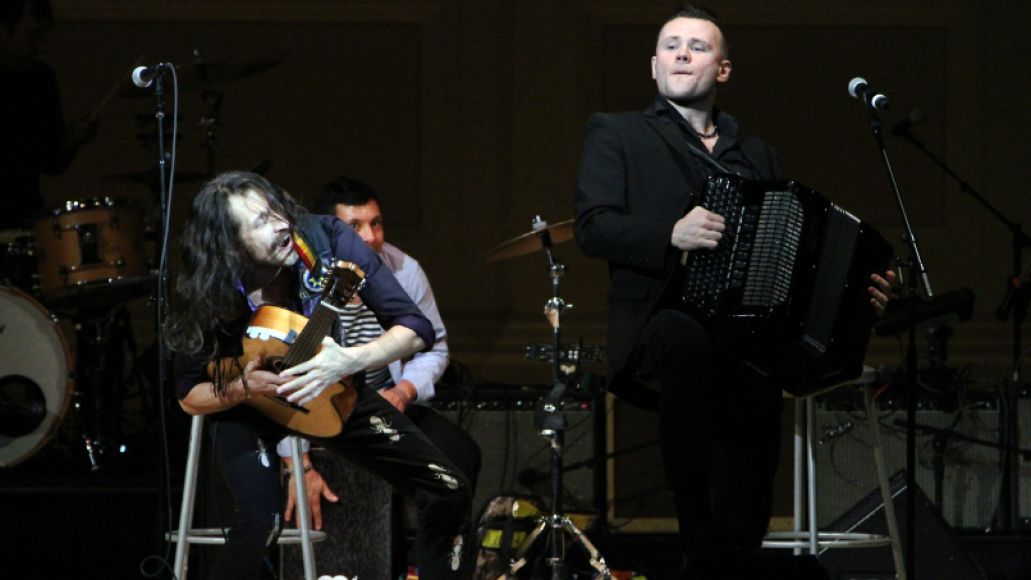 Finally, Iggy Pop emerged for his headlining spot. The veteran rocker chose not to build on the frantic energy of the penultimate act, but instead performed two spoken-word pieces, “I Talked to a Smart Guy” and “Mom and Dad Are Gone”. The latter, backed by the Scorchio String Quartet, was beautifully sprawling as he eventually declared, “I have their ashes, and I have their memories,” looking up at the ceiling and waving goodbye. Pop’s tribute to the deceased continued with a jubilant cover of David Bowie’s “The Jean Genie”. The crowd, which was largely tame for the duration of the show, sprung up. Soon, fans spilled into the aisles and crowded the stage. After the song ended, the audience cheered wildly as Pop said the performance was dedicated “in honor and memory of Bowie.” 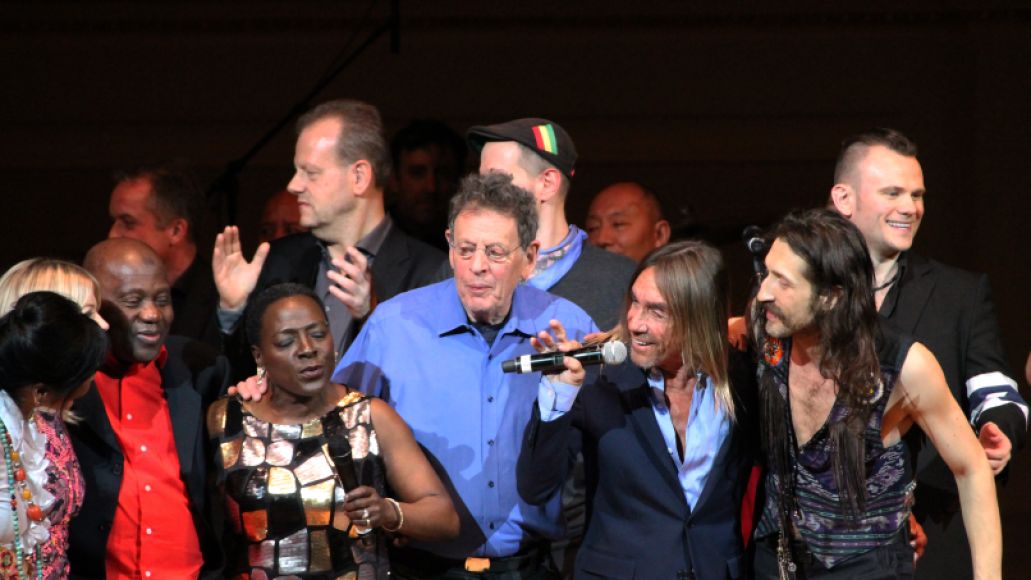 The ushers gave up trying to steer people back to their seats. Feeding off the sheer positivity of the crowd, Pop transitioned to “Tonight”. The past couple editions of the concert closed with Patti Smith’s “People Have the Power”, but tonight Bowie was the star. The earlier performers re-emerged to sing together, and the lyrics made for a poignant end to the evening:

“I will love you till I die/ I will see you in the sky/ Tonight”. 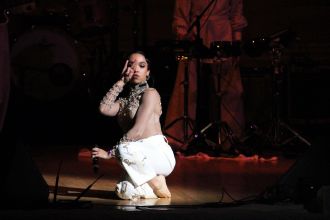 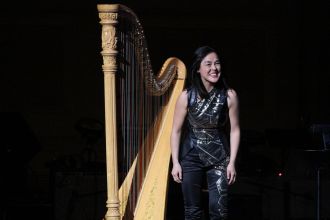 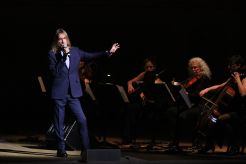 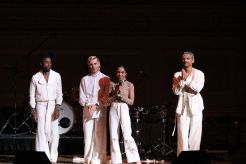 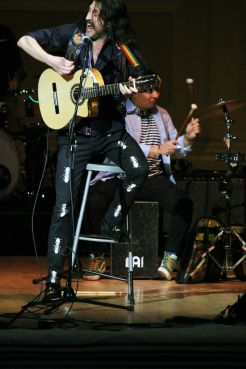 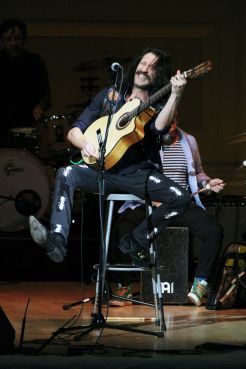 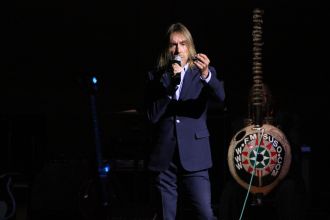 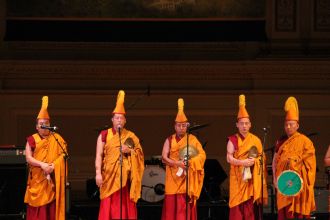 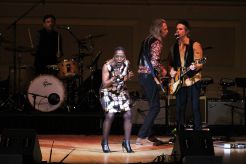 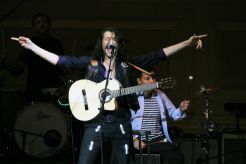 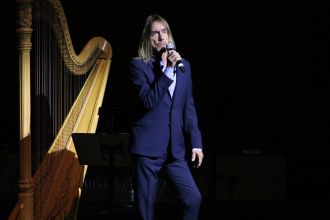 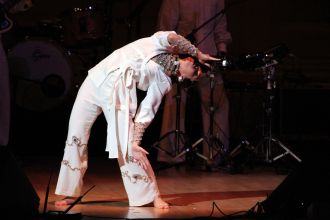 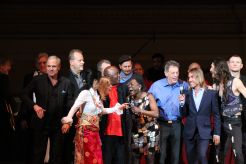 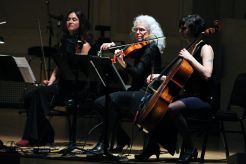