Like Chicago, winter in Montreal runs cold and long. The sub-zero temperatures can stretch well past the spring equinox, and even the holidays in December aren’t enough to break up the freeze. What else are you going to do about all that chilly ennui except brave the cold for a midwinter outdoor rave?

That was the thinking behind Igloofest, the winter counterpart to Piknic Electronik, which draws fans of dance music and drinking out to Parc Jean-Drapeau during the long Sundays of summer. On the flip side of the calendar, Igloofest sees tens of thousands of revelers gather along the Old Port of Montreal. The frozen water of the Saint Lawrence river becomes a backdrop to the flash of floodlights and the thump of techno sets. About half the DJs that play Igloofest come from Montreal — like with Piknic, the bookers like to foster up-and-coming local talent — but this year saw Gina Turner fly up from New York, La Fleur from Sweden, and Sébastien Léger across the pond from France. 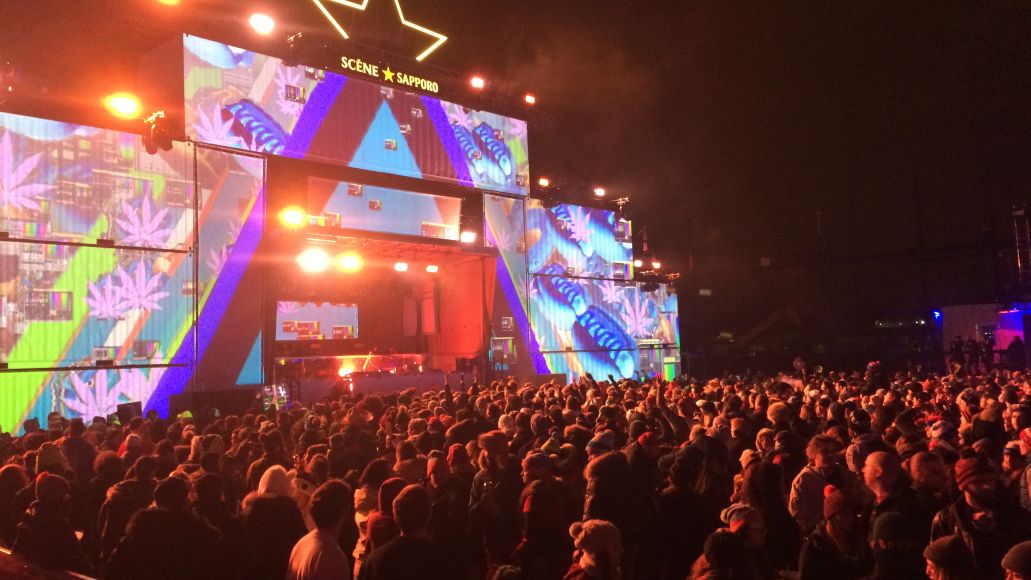 From early evening to just after midnight, that heterogenous talent plays seamlessly together across the temporary winter village that Igloofest builds. Throughout the campus, which houses two stages complete with screens operated live by a roster of VJs, beats pulse while attendees wait in line for a three-story mega-slide or roast marshmallows over wood-burning barrels. People dress up in neon snowsuits and animal costumes — there’s a contest for the best “Iglooswag” — and dance without worrying if they look silly. Of course they look silly. That’s the whole point.

Throughout the four-weekend festival, people get to play in the snow like they do when they’re kids, and this year, for Igloofest’s 10th anniversary, I was lucky enough to tag along.

I touch down in the same temperature I left behind in Chicago. It’s warm for a Montreal winter just like it’s been unseasonably mild, for the most part, in the Midwest. Throughout the weekend, I’ll hear the balminess blamed on El Niño, but at just above freezing (zero, in Celsius), I can’t really complain.

My hotel’s in the older part of the city overlooking Square-Victoria, surrounded by stately government buildings and banks and anonymous facades — lots of stone, lots of Greek columns. The sky between the skyscrapers is a flat, wide gray and will be until I leave Sunday morning. The hotel itself, the W, is a blast of modern slickness set across from the old world. It shares a color palette with Igloofest, dark pinks and bright turquoises, mirrors everywhere. My room reminds me of the makeup floor in a Macy’s, in a good way — good light, good smells.

I meet Catherine and Stephanie from Tourism Montreal in the lobby, and we go for cocktails in the hotel’s restaurant. We’re joined one by one by the three other journalists covering the fest, and cocktails turn into dinner, which is mostly small plates and seafood. I’m not much of a fish eater, so I go for the vegan option, a kind of cauliflower cake dressed with what I think is pickled radish. The seafood angle is new for the place; the restaurant was recently renovated and now has a street-art theme. On certain nights, artists in residence will come paint canvases on the walls; we’re not there for the live painting, but we get to see its fruits in the scratchy, expressive works that decorate the place. 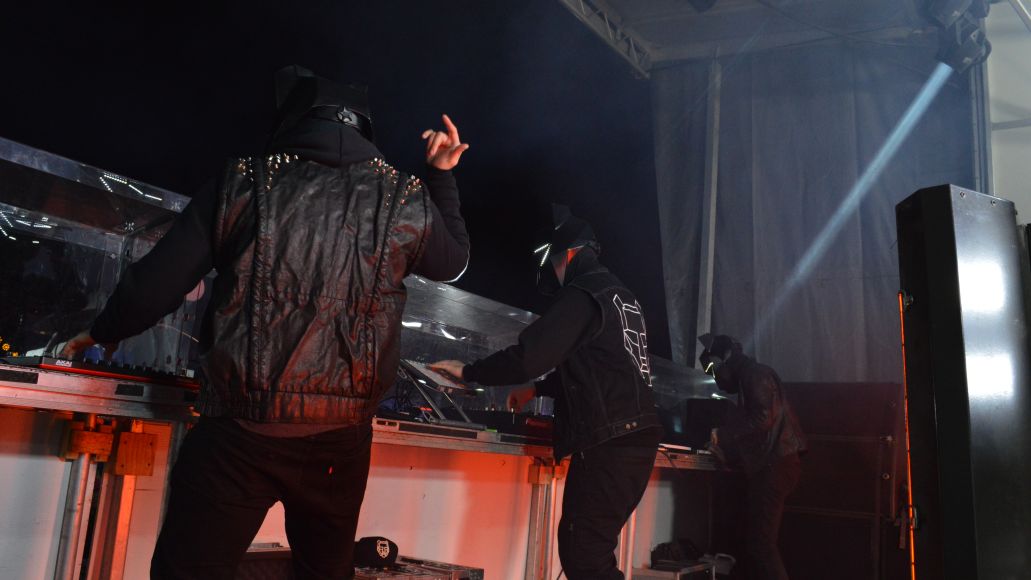 After dinner, we walk to the first night of Igloofest’s third weekend. This year is its 10th incarnation, and its opening weekend netted a record 25,000 attendees — its biggest opening to date. It’s still nice out as we walk past a few of Old Montreal’s most picturesque buildings, like the Notre-Dame Basilica, a 19th century church now lit up cyan and white. We see Igloofest’s searchlights combing the sky before we see the festival itself, but when it comes into view at the top of Place Jacques-Cartier, it’s huge — and already loud.

Black Tiger Sex Machine is playing the main stage when we arrive, and most of the audience clusters around their bombastic, playful beats. This is not, we’re told on a tour of the grounds, the biggest night of the three; people still have to work tomorrow, so it’s mostly younger attendees — students, maybe, or service workers enjoying a night off. We pass someone whose face is hidden inside a full astronaut costume. It’s not yet packed, but those who made it out are taking the evening seriously.

After our tour concludes, I slip over to the smaller Videotron Mobile stage, where DJ Mini plays to a small but attentive crowd. Like Black Tiger Sex Machine, she’s local to Montreal, and her work focuses as much on sound design and installation art as it does on DJ sets like this one. Later, we’ll talk up in the enclosed Sapporo lounge where she’ll tell me about the time she played the very first Igloofest on the very same stage. Back then, it was the only stage, and its original location lends it a kind of authenticity now, as does the fact that it largely showcases local talent.

“I’ve played [Igloofest] three or four times,” says Mini. “But it’s the first time I’m back on what they call the B-stage, the more electro stage — though I think I’m playing more techno than even the mainstage was.” 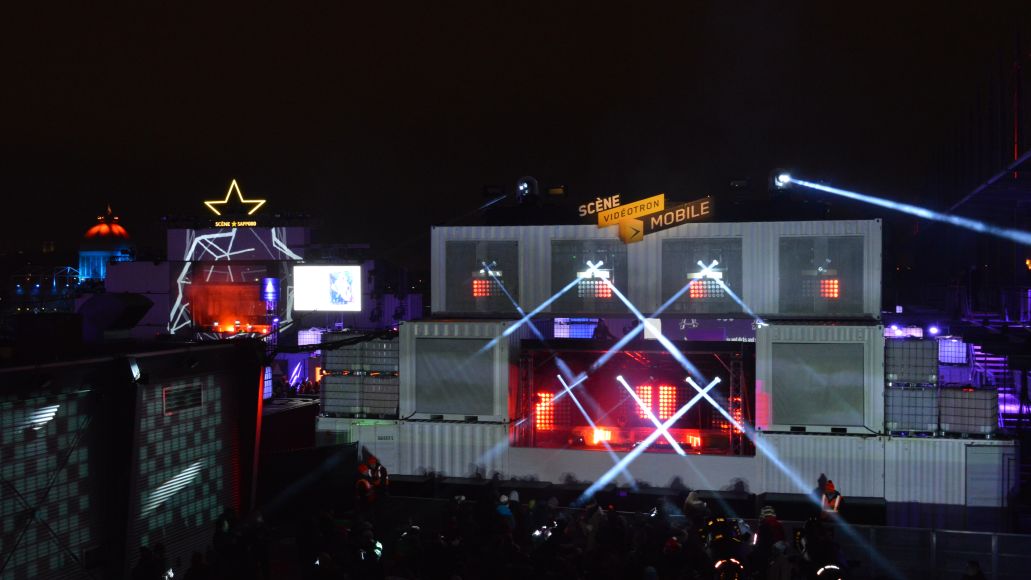 She reflects on Igloofest’s decade-long growth as the only festival of its kind. “It’s become an establishment,” she says. “People would rather come here than go out clubbing, which I think is more healthy, because they’re outside and in a large group of people. They’re not all just focused on getting trashed. It just feels like they’re bringing something to people that’s more meaningful. It’s about how you place people together, how they can have fun. How can we surpass what we go through on a daily basis? We have extreme weather. Everyone in Canada has to be a little bit bipolar. It’s part of what happens when you’re exposed to this kind of weather. But I think they’re making people’s lives better because they’re providing a space to let go.”

Thursday night ends a little earlier than the other two, but not before France’s Mr. Oizo packs a crowd who dance like it’s midsummer, cold beer and hot chocolate in hand. 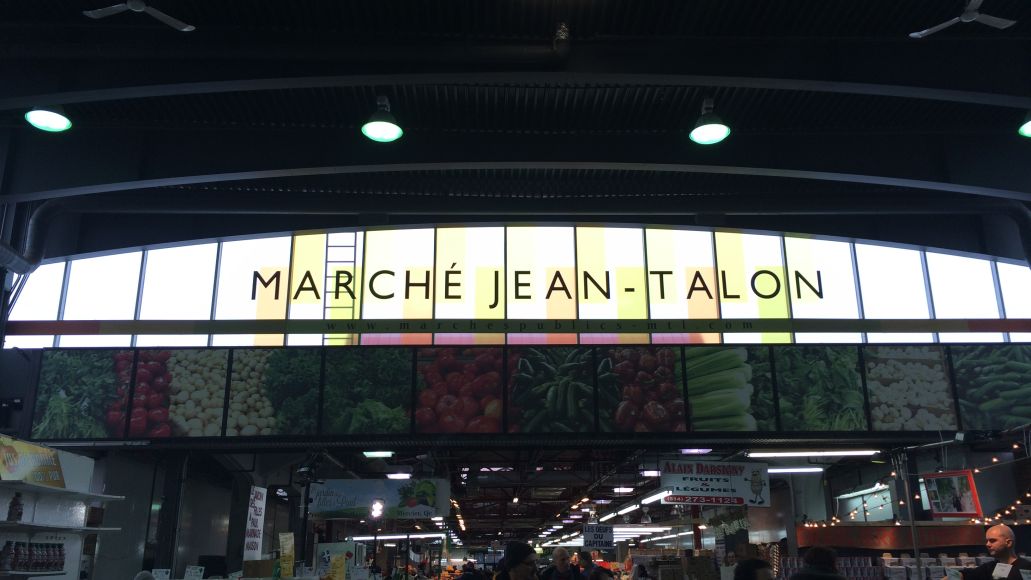 It’s hard not to notice an immediate shift when you cross the border from the continental US to Quebec. Everyone speaks more French, of course, but croissants also start tasting like croissants, and bagels start taking on all the properties of gently honeyed cigarettes. Food is a big deal, so we started off our Friday with a walking tour of some of Montreal’s best, beginning with pupusas at Los Planes in the city’s Latin neighborhood. I’d never tried the Salvadorean dish: a thick corn pancake filled with cheese and pork (spinach for me), then topped with pickled vegetables, tomato sauce, and hot sauce. Chicago is known for its tacos and its stuffed pizzas; Los Planes’ pupusas taste like a hybrid of the two.

Led by Danny Spade of Spade and Palacio Tours, we swing by a nearby bagel shop for some freshly baked bites, then duck inside the Jean-Talon Market, a year-round farmer’s market currently enclosed by temporary walls. We try real Quebecois cheese, which is so unlike the stuff you get in the States that it seems unfair to use the same word: It’s not salty, but moves through savory and bitter waves. One kind tastes exactly like mushrooms. We stop by a spice shop to smell some cacao pods, then sip fiddlehead and nettle soup from a forager’s stand loaded up with wild mushrooms for sale. Danny offers smoked meats from a charcuterie, and then it’s beer time.

Nearby in Little Italy, Harricana is one of many hubs of Montreal’s new craft beer scene. Each of its beers wears a jersey number instead of a name; the founders’ old sports trophies are on display in one corner, and in the summer they put out bleachers on the sidewalk instead of patio tables. We drink 5 ounces each of the no. 2, a sour session ale that tastes like it’d be perfect on a hotter day, and the 88, a cloudy, caramel-colored “Hopfendunkelweissbier.” In the back you can see the brewing operation through a pane of glass. Harricana doesn’t bottle, so the sunlit pub is the only place you can taste the fruits of their labor.

On our way back to the hotel, we stop by the Mural Festival headquarters to see some of the street art along Saint-Laurent, one of the city’s major throughfares. Last summer, the festival shut down the whole street to allow spectators to watch world-renowned artists cast their magic on bare brick. Within just a few hundred feet, several pieces loom large and colorful against the gray sky and browning snow. Maybe the most impressive is a work by Chilean artist Inti called “La Sed del Oro Nos Dejara Sin Agua”: “The thirst for gold will leave us without water.” 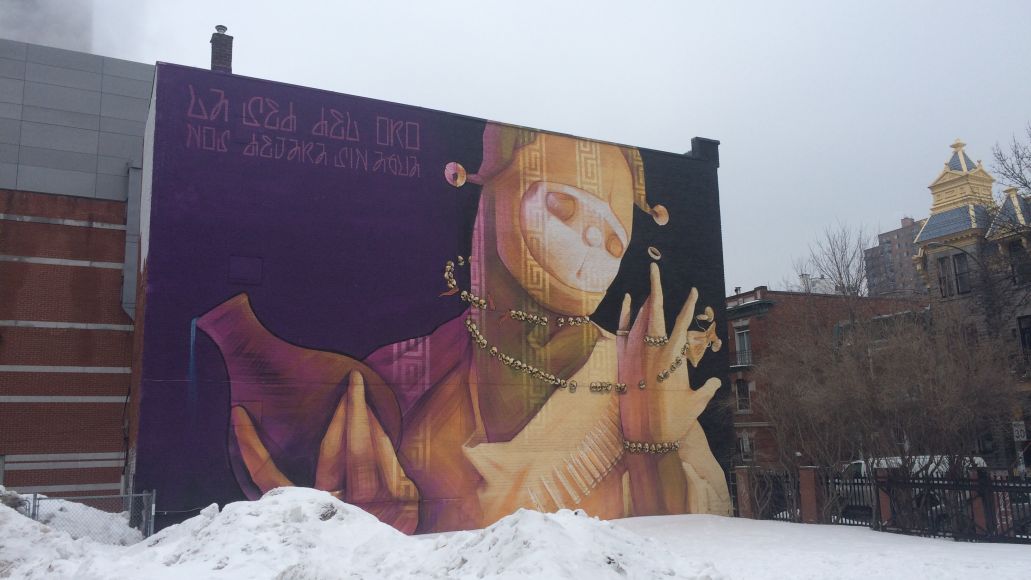 Back at the W, we catch a preview set from DJ Gina Turner at the hotel bar, then walk through the streets of the old city to Méchant Boeuf. Despite its name, the bar and restaurant is surprisingly vegetarian-friendly; I eat my first double-patty veggie burger, which comes smeared with avocado and gruyere and goes perfectly with the Gaspar lager they’ve got on tap. Once we’re full up, we dive back into the ice fest for night two.

Local DJ team Nymra and Sofisticated oversee the tables on the second stage when I get in, their beats lean and minimal but full of life. They’re working a growing crowd under snow flurries; they’ve been at this for years, and it shows. Later, I chat with them both in the green room right before they have to book it to their residency night at Salon Daome in Mont-Royal, where they’ve spun tech-house every month for six years.

“This is crazy,” laughs Sofisticated after her set. “People from my office that don’t come to Piknic — they come to Igloofest because this is something crazy to do in the winter.” 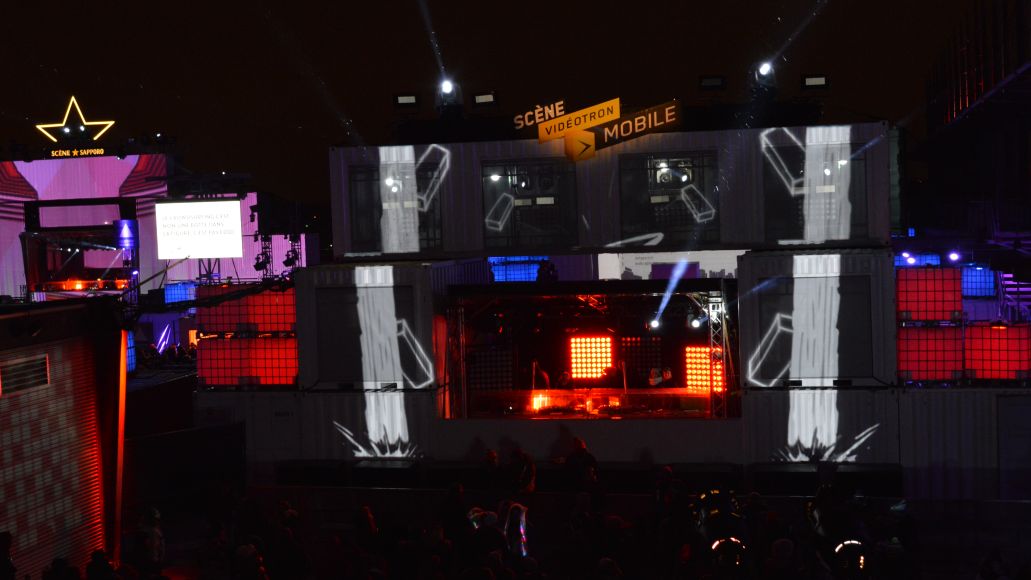 Both women attended the inaugural Igloofest, as well as the first-ever weekend of Piknic. They played their first set here a few years ago, when the wind chill dragged the temperatures down to 40 below zero; luckily, they were scheduled to play the stage that was under a dome. “Everybody was there because it was so cold,” says Nymra. “Everybody wanted to have the warmness of the dome.” Over the years, they’ve watched Igloofest grow into something of an institution.

“There’s not a lot to do in winter in Montreal,” adds Sofisticated.” People who aren’t used to techno music, they come here because it’s unusual. It’s crazy and they want to have this experience. It’s really an experience.” Outside, the vibrations from Carl Craig and Al Ester’s Detroit techno set punctuate her words.