The five sisters at the center of Mustang, France’s current nominee for Best Foreign Language Film at this year’s Oscars, have a unique power with which to rebel – sisterhood. Together, they all long to share the same freedoms: to be educated, to hang out with boys, to play and enjoy sports, and most critically, to form their own thoughts on marriage. The use of family is a deliberate choice on the behalf of director Deniz Gamze Ergüven, who allows these characters to find strength and enables them to fight back when their circumstances turn for the worst, through their sisterhood. As the tyrannies of a patriarchal society are played out through their misogynistic uncle and misled grandmother, it is matched in the strength of their sibling bond.

In Mustang, trouble begins for the sisters on their last day of school, when as a celebration, they jump into the ocean in their school uniforms, screaming and laughing with joy. They clamber on the backs of male classmates, innocently wrestling and splashing in the water. Neighbors hear the commotion and misconstrue the playful outing as sexual misconduct; this makes the family the object of town gossip, and the girls’ lives are irreparably changed. Their cruel uncle locks the sisters in the house – bars are put on windows, doors are fortified with locks, and the walls are fitted with spokes. The rural Turkish countryside that provides a beautiful backdrop is just one more obstacle between the girls and their freedom. Their home becomes a prison, a physical representation of how limited the life of young women is in this society. Yet long after their rights to education, beaches, and outside socialization are taken away, the crackling, unruly spirit of their sisterhood remains, the spark for their rebellious acts.

It seems a natural assumption that there would have been many similar stories about the triumphs of sisterhood in which Ergüven found inspiration. Yet looking back through film history, there are a surprising lack of films that tackle young female perspectives in this way. This is why the film has drawn so many comparisons to The Virgin Suicides, the novel by Jeffrey Euginedes that Sophia Coppola adapted in 2000. There are undeniable similarities – The Virgin Suicides is also the tale of sisters imprisoned in their home, the object of scandal for their older conservative guardians. Both movies are characterized by tragedy, implying the deadly serious, harmful repercussions of patriarchy.

The similarities between these movies, however, don’t represent a recurrent film formula, so much as an increasing interest in female stories. As the connection between sisters is complex, this narrative lends itself well to exploring many facets of womanhood, especially in the face of a society that harbors an extreme fear of female sexuality. From the Euginedes’ suburb in Michigan to Ergüven’s small town in Turkey, the societal preoccupation with virginity is a constant presence. It’s meaningful that the two stories tackle similar feminist themes while existing across different generations and cultures, and it implies that framing these conversations as a sibling narrative is one way these conversations are allowed to happen. 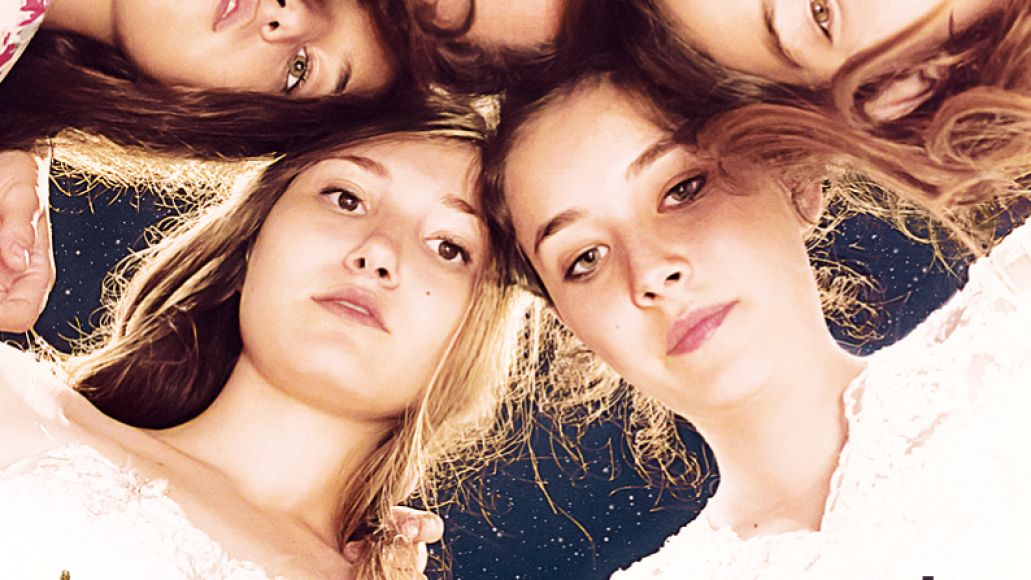 The narration is one key area where Mustang differs from The Virgin Suicides. Where the latter is told from the vantage point of the boys living next door, Mustang is more authentic to its female characters, following the bold youngest daughter, Lale. In order to craft this perspective, the director borrowed from personal and cultural sources; the beach scene that instigates the conflict in the film, as well as much of the characterization of sisterhood, is drawn from her own childhood. Yet while creating the film, Ergüven had surprising stories in mind, citing male-driven stories like Luchino Visconti’s Rocco and His Brothers and movies with escape and survival plots like Escape from Alcatraz. It is fairly uncommon to tackle the bonds and sacrifices of family within the female perspective, and it allows for a great deal of empathy and empowerment. The power of Mustang represents an urgent desire for more films that center around sisters instead of brothers, as it is an equally emotional and complicated perspective, if not even more so.

In their sisterhood, the sisters create a society separate from the one that oppresses them. They make the rules, and in the ugly face of suffocating patriarchy, they encourage each other to remain smart, wily, and brave. Their rebellion is creative, often even subtle, working among themselves to find any way to fend off their fate. The character the five sisters form together, a character that is as resilient, strong, and elegant as a mustang, exists as a distinct contradiction to Turkish society. It is most delightful in their perfectly rude banter with each other, the way that through even the roughest moments of their circumstances they laugh and joke, resistant of the ban on female laughter in public. They are distinctly feminine, reveling in clothes and doing their hair, but they draw authority and bond together through the feminine.

Sisterhood provides the perfect vehicle to explore misogyny and patriarchy in film. While there are many bonds restricting these young women, their sisterhood is the only one that empowers them. The connection between siblings holds weight – an unspoken, sacrificial friendship, an intense tie that holds power in the face of familial, societal, and political pressures. It is a shame that this kind of tale is not one often told. The nature of this film only further emphasizes the importance of female directors and how rich stories about womanhood can be when given the platform to be told. Ergüven is one of only two female directors of any film up for an Academy Award this season, a season that is once again notably lacking in diversity. If more impactful stories like the one that belongs to the five sisters of Mustang are going to reach people, this will need to change.

Why the New James Bond Needs to Be In His 30s

Mustang and The Society of Sisterhood