It’s just a few days before we hear Kanye West’s highly anticipated seventh LP … and we still don’t know what it’s called. In a culture that’s seen the surprise release of albums by Beyoncé, Drake, and most recently Rihanna, this isn’t necessarily unprecedented. But what’s rare is how much we do seem to know about West’s album already from news clips, interviews, and the rapper’s own hyperactive Twitter account.

We know that it’s “a gospel album with a whole lot of cursing on it.” We know that it features Kendrick Lamar, Ty Dolla $ign, Vic Mensa, and Sia. We know that it contains 11 tracks shoehorned into a three-act structure. We know that Swizz Beatz, The Dream, Chance the Rapper, Earl Sweatshirt, and many members of the Kardashian-Jenner clan have all graced its ever-changing tracklist. We know that the album’s debut will come in the form of a sold-out Madison Square Garden event on February 11th.

And yet, all of these facts seem liable to change seconds after you hear about them. West’s seventh album has maintained a fluctuating presence as its title has mutated from So Help Me God to SWISH to Waves to the cryptic T.L.O.P. The rapper’s sudden reversals could signal the most bungled delivery of all time, or they could be viewed in another light: as a surprisingly candid look at the interior life of pop music’s most outspoken perfectionist.

Transparency is a far cry from what West has typically offered us in the past. My Beautiful Dark Twisted Fantasy had G.O.O.D. Fridays, a campaign which previewed four singles that would eventually appear on the final record, but West maintained intense secrecy during that album’s now-legendary recording sessions in Hawaii. Stopping just short of confiscating his collaborators’ cell phones, he instituted a policy that might sound familiar to anyone who’s caught a Savages live show (“No tweeting, no talking, no emailing”). Yeezus was similarly light on details until the last minute — West didn’t share that album’s final tracklist until five days before its release. 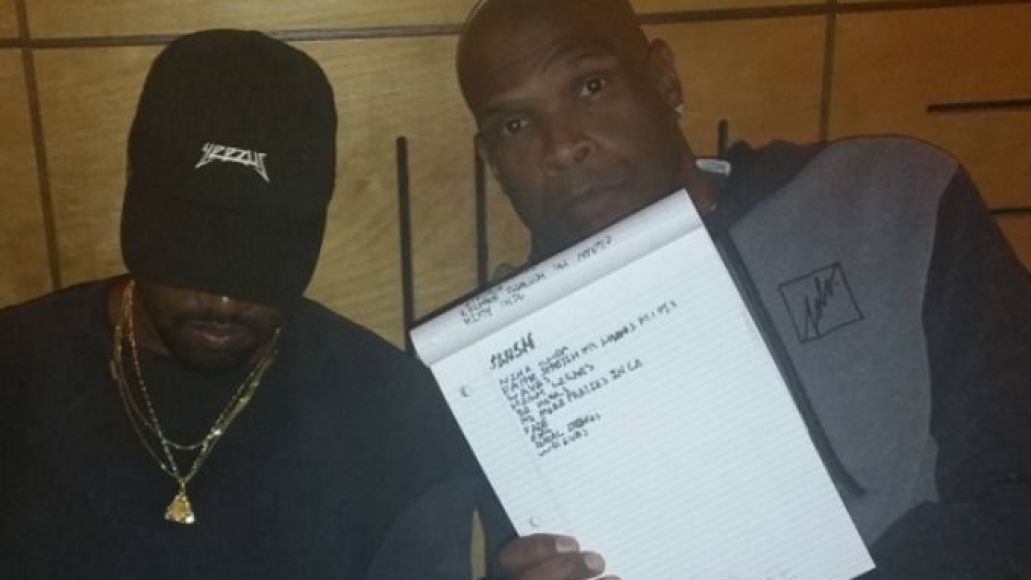 For a while, it seemed as if West was stringing us along with the classic high school slacker excuse: I wrote the paper, but my printer jammed on the same night my computer got a virus. He’d been hinting at this record’s release since the Yeezus tour, starting with an interview in which he called the new album his Born in the USA (supposedly signaling a return to inclusive, feel-good pop music). He also claimed that it would be out by the summer of 2014. By the end of 2014, West had apparently rapped the album live for Seth Rogen in a limo van, and Theophilus London claimed to have heard it three times at a listening party. But empty promises snowballed into a scattershot output of singles in 2015, and skepticism slowly began to mount.

So far, West’s 2016 has been an unmistakable — and mostly successful — effort to right the ship. G.O.O.D. Fridays returned with two impressive singles, and West tweeted out what might be his best asset for completing an album on time: a deadline. The rapper’s Twitter account has always been the most direct vessel into his mind, but so far this year it has taken on a surreal behind-the-scenes role. A few weeks back, he tweeted a somewhat unreadable tracklist for SWISH, complete with a slightly controversial message: “So happy to be finished with the best album of all time.” 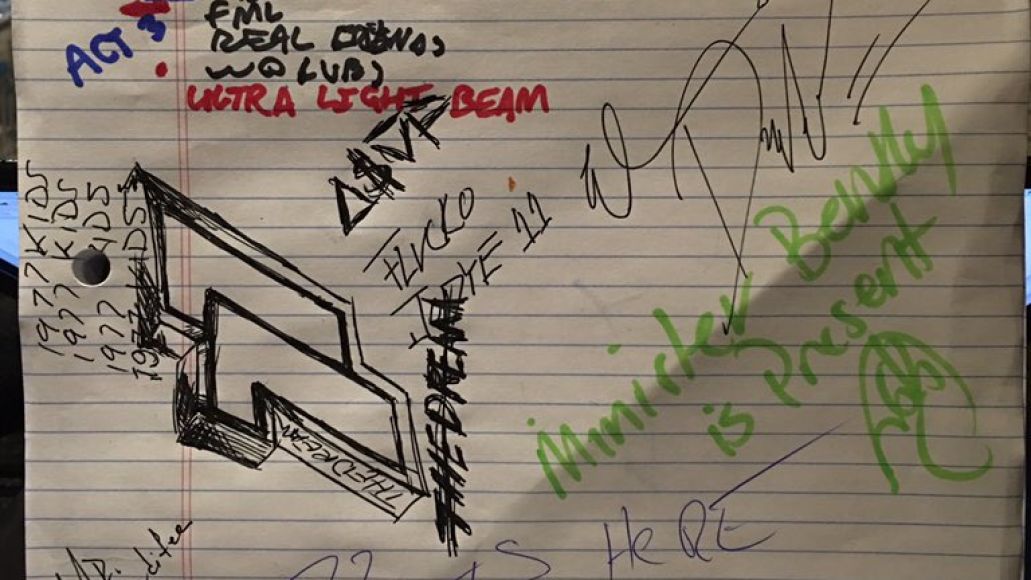 In the following days, the handwritten tracklist became a kaleidoscopic yearbook page — a de facto sign-in sheet for any collaborator or family member who happened to swing by the studio. The tracklist itself was still being edited on the fly, with West superimposing a three-act structure, changing the title to Waves, switching up song names, and adding new closer “Ultra Light Beam”. All of this contradicted his Mission: Accomplished tweet and suggested that this thing was still a living, breathing work in progress.

This homespun artifact of the recording process gives us the trademark Kanye West perfectionism and braggadocio in equal measure. He isn’t quite providing the voyeuristic glimpse that PJ Harvey offered with Recording in Progress when she publicly recorded her new album at London’s Somerset House or that Daft Punk offered with The Collaborators video series that preceded Random Access Memories, but West’s ever-evolving tracklist reveals a great deal about his temperamental, down-to-the-wire methodology. Just before Yeezus was released, Rick Rubin detailed some of their eleventh-hour tinkering, and this current tracklist serves as strong evidence that T.L.O.P. (or whatever it’s called) went through similar tribulations. 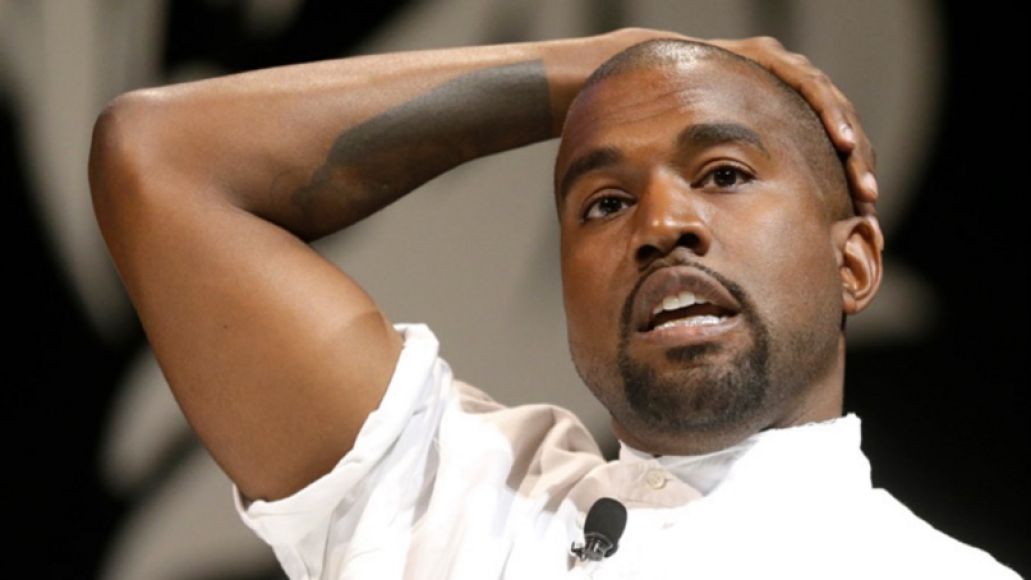 Perhaps the biggest surprise about this untitled release is how telegraphed it’s been. Last year, West proclaimed that “release dates are played out,” but with this record’s rollout, we’re seeing just how quickly surprise releases became played out. He’s not eschewing the album cycle altogether, but subverting the typical means of press distribution. By sharing the heavily amended tracklist directly with his fans and posting finished singles to SoundCloud, West has effectively eliminated the record label as a middle man. From the moment he began spilling details in radio interviews, this new album was never going to be a complete stunner like Beyoncé or even Louis C.K.’s recent Horace and Pete series. West simply seems too proud to keep a secret for long.

And so he is giving us a string of surprises instead of one big blitz. His guerrilla approach leaves fans with bated breath, waiting to unearth every new detail, but for everyone else it’s, “Sure, Kanye, whatever.” Since we’ve seen the new album evolve so much in the past two weeks, it’s almost hard to conceptualize it as a real product until it starts playing in movie theaters or popping up in our iTunes libraries. No matter what this record looks and sounds like when it’s finished, the safest bet is that it won’t be whatever Seth Rogen heard in that limo.

So Help Me SWISH: What Is Kanye West Doing?