Editor’s Note: As Yoko Ono, the widow of John Lennon and a celebrated artist in her own right, celebrates her 88th birthday today, we decided to take a look back at the gracious interview she granted Lior Phillips back in February 2016. This wonderful conversation also includes a roundtable with several of Ono’s collaborators, including Moby.

“I’m not gonna die for you/ You might as well face the truth/ I’m gonna stick around/ For quite awhile,” Yoko Ono insists on “Yes, I’m a Witch”, a cut from the 1974 “lost weekend” sessions later released on A Story (1997). She’s still here, like a many-headed hydra who grows two affirmations as soon as you cut one off. Ono has never strayed from telling the truth and telling her story.

At 83, she’s lost nothing of the triumphant rebellion she wielded 50 years ago, when the words “Yoko Ono” were flaunted like a badge, synopsizing her entire personality: You couldn’t push her over with a tabloid headline or a 10-ton truck of Beatles fans. She’s an award-winning multimedia artist and a peace crusader, a classically trained musician and a performance artist — simply put, a force. She was married to John Lennon from 1969 until he was murdered in 1980. Even still, the world vilified her, accusing her of squashing The Beatles. The public’s bigoted understanding of Ono seemingly left her without hope.

Rather than allow herself to be overpowered by mockery, confusion, and anger, Ono channeled those very same emotions into an outpouring of creativity. Her heart spread across film, art, and music while savoring no ego but focusing instead on love.

A mischief-maker and a challenger, a relentless campaigner for feminism and peace, Ono scratches a mark on a door frame for us all to measure our lives against. Even when the world spoke with aggression, Ono kept telling a story. In 1965, she turned public animosity into a personal, physical act to perform “Cut Piece”, in which she invited the audience to cut, claw, and snip her clothing with scissors. Four years later, in 1969, Ono and Lennon spent their honeymoon in bed, documenting the notorious “Bed-In” to stimulate tired conversations surrounding world peace at the height of the Vietnam War. “Have some sign on ya,” Lennon preached to the press. “Some sign that’s for peace.” 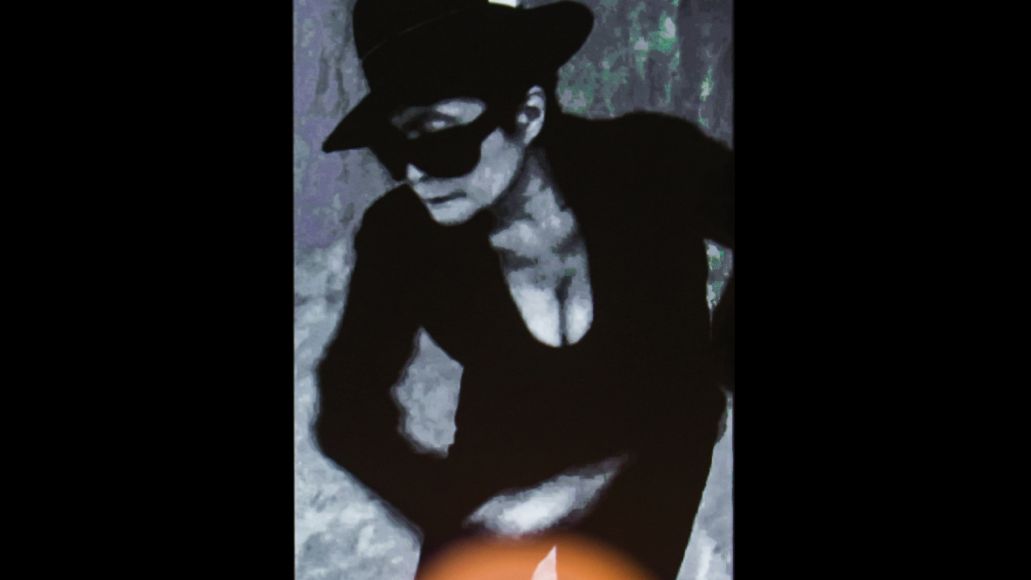 No matter the words or actions Ono chooses to tack to her signposts, they’re always intentionally unfinished. Ono’s art drives to a crossroads so that it can be reinterpreted, remolded, and reformed by each one of us, in every which way imaginable. Yes, I’m a Witch, 2007’s 17-collaborator-strong remix album, made a remarkable case for this route. Ono invited the musicians into her art, asking them to contemplate her compositions and reimagine them. From drenched piano balladry to glossy funk and pop, it’s a way to sit down with her entire discography like an open book. Depending on which page you open to, that book might seem like the manuscript of a private confessional or a ruthless satire.

Now Ono is collaborating with 18 new artists for a sequel titled Yes, I’m a Witch Too. Why? That’s not the kind of question she would ask. Really: Why not? Each song relies on slices of memory and a distinctive voice — a voice that’s heavy on nostalgia, full of ideas and life lessons. This time around, Ono’s collaborators include Cibo Matto, Peter Bjorn and John, and Moby. Together, these musicians reaffirm art’s capacity to tell timeless human stories, and Ono provides the skill in artfully arranging their multitude of unique voices.

“I may cry someday/ But the tears will dry whichever way,” Ono sings on the album opener, “Walking on Thin Ice”. “And when our hearts return to ashes/ It’ll be just a story, it’ll be just a story.” In this claustrophobic world, Ono speaks loudly but with relatively few words. No matter how many voices crowd into the frame, Yoko Ono will tell her own story and deliver her own legacy of love and beauty. 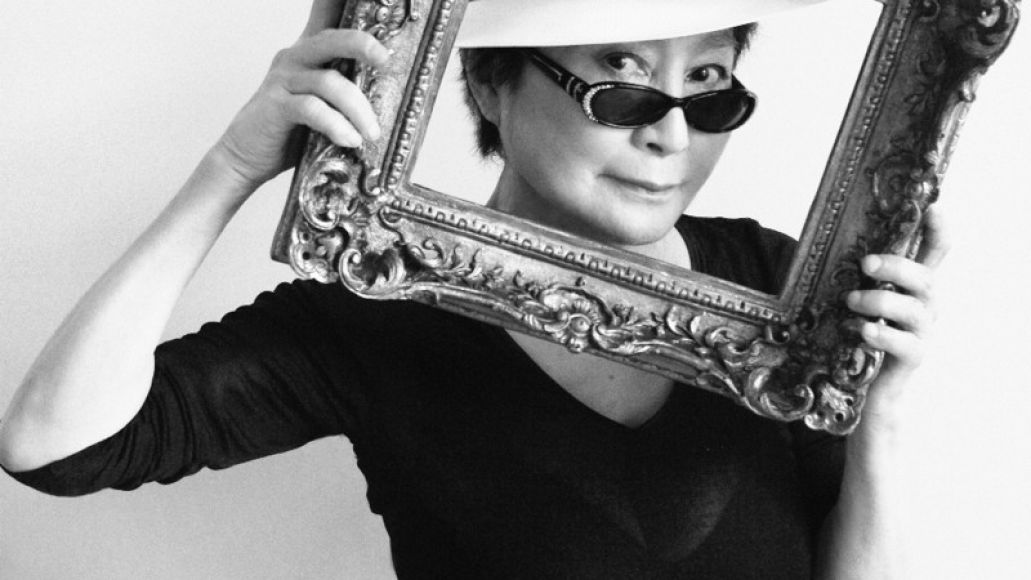 From Thurston Moore to Eric Clapton, Bette Midler to Moby, you have always surrounded yourself with exciting collaborators. Is your process such that the songs call for partnership, or is it to accentuate your creativity as an artist?

When I created this format of music, I didn’t even know if I would like it or not. My concept of music was: what you work on from the beginning to the end by yourself. I was not thinking of getting so-called “exciting” collaborators. The first one was on [Unfinished Music No. 1: Two Virgins]. I asked the audience to add what they wanted to add to unfinished music using their inspiration. Two Virgins as you may remember had Unfinished Music No. 1 on the cover, so I did explain what that meant. But I never heard back from critics. If there were musicians who understood that concept and then added their musical notes, lyrics, or both to it, I would not know since I haven’t heard from anybody about it.

But suddenly now there seems to be so many hip musicians who understand what it is all about, what I meant when I called it “unfinished music,” and they are now known as collaborators. It is more suitable to call them rebels. The new format is not like the usual music. It is an evolution. Their energy level is different from one who is “collaborating.” It is beyond collaboration.

Your upcoming LP features these collaborations and remixes of songs spanning back as far as 1971’s Fly, like “Mrs. Lennon”, as well as bonus tracks and acoustic demos from your third album, 1973’s Approximately Infinite Universe (“She Gets Down on her Knees”, “Dogtown”), which were featured later on 1981’s Seasons of Glass, etc. How important is the reinvention and reinterpretation of songs for you, and do you create music with the idea that songs will evolve over time with reinterpretation?

It is so important to me since they are using the freedom I gave them, and creating something that is great.

Indie names like Death Cab for Cutie, Peter Bjorn and John, tUnE-yArDs, and Portugal. The Man are featured on the album. What was the process of pairing collaborators with songs? Did you consider their artistry and then pair them to songs or let them choose from your discography?

Definitely, they chose the songs … and when they did, I was sure that their creativity, by adding or stepping on the original song, was in their heads.

For many artists, songs tend to be bound to an album. When considering your remarkable body of work, no song ever lives in isolation. It’s either a soundtrack to a movie you created (“Fly”/ “Airmale”) or an EP linked to a book you’ve written (“A Blueprint for the Sunrise”). It continues to evolve. Has this always been your philosophy?

I am always exploring a new way of creating music. It gets to be boring if I don’t do that. Even the most mundane music, music with the most ordinary format — just like a jacket with a sharp cut — has something fresh.

Music, art, and writing: Each mode of creativity has the ability to bring out its own resolution for the artist. What does the medium of music, as opposed to your writing, allow you to free within yourself?

I don’t get tickled easily. But, there is enough music out there to get a smile out of me. It’s a good era for music. I mostly count on pure energy that is bubbling inside me. If I don’t do something about it, what happens to that energy when I pass away? When I think of that, I think I have to put down things that I want to put down — now or never.

As a feminist icon, was it ever a consideration to feature more female artists other than tUnE-yArDs, Cibo Matto, and Ebony Bones? Do you see gender as a priority in art?

I am not loving music by those girls just because they are girls. They are incredible artists whether they are transvestites or bisexual or a Man from the Moon…

A quote of yours lodged into my brain a few years ago: “A dream you dream alone is only a dream. A dream you dream together is reality.” Your son, Sean, has contributed guitars and keyboard to your albums in the past, and here he put together a new version of “Dogtown”. Do you find you’re able to tap into something different when working with family?

Again, I’m not loving the musician Sean just because he is my son. As a musician, what comes out of his head is nothing like that of his parents. He is nerdier than us, which I think most musicians are now. He is the resident nerd, and it’s nice.

People were illogically unkind to you in the past, closely identifying you with the character “Yoko Ono,” rather than the essence of who you are. Using art, you took that energy and turned it into love. What kind of responsibility and power does that give you as an artist and artists around the world?

When I started Unfinished Music…, I never knew that it would give so much relief to musicians who wanted to finish my unfinished music, but in their own way. Here, they don’t do just that; they want the songs to be theirs. The fact that somebody whispered to them, “Anything goes,” relieved them from a blocked mind. So many musicians are writing songs together now.

Considering the muddiness of the world, what is the most encouraging sign for the future?

That music turns into love through touching each other with music … music-making will turn everybody into the world of love.

Click ahead to read our conversations with several of Yoko Ono’s collaborators, including Moby, Peter Morén (Peter Born and John), and Zach Carothers (Portugal. The Man), among others.

We're All Witches: An Interview with Yoko Ono & Collaborators