The relationship between Pinegrove’s Evan Stephens Hall and Zack Levine got off to a tough start at a Hall family barbecue in Montclair, New Jersey, at the age of six. Their fathers were friends and musicians, working in the commercial jingle industry, living in the suburbs for the short commute to New York City for work. Hall, now the band’s singer and songwriter, had been collecting cicada shells, holding his precious commodity in a bucket on the second story of his tree house.

“I took it upon myself to pour the bucket of cicada shells off the top of the tree house, crushing them all,” Levine, the band’s drummer, recalls in shame. “It’s one of the worst things I’ve done in my whole life.”

Despite this rocky encounter, the two formed a fast bond, sharing the memory of playing drums together at a later family barbecue, one taking the left side of the kit and the other taking the right side, barely old enough to read but already following in their parents’ musical footsteps. Their first band together, The Pug Fuglies, was formed in the sixth grade and never got off the ground, but their seventh-grade endeavor, Dogwater, lasted until they finished high school. College separated the two, but Hall considers that time supplementary for his songwriting.

“English degrees are really art degrees,” Hall says, taking off his shoes on a patio of a hotel that none of us are guests at, “so the way I learned to read books out there was co-evolutionary to the way I learned how to write songs.”

Interestingly, Hall cites books more than music as helping him develop his own artistic voice, the voice that has ended up being the backbone of Pinegrove. He casually mentions The Waves by Virginia Wolfe and Infinite Jest by David Foster Wallace, saying that “they made me feel ambitious, in that they have such a specific worldview, and made me question what I have to offer.”

The two can talk about George Saunders in the same breath they express their love for Green Day, marking a distinct lack of pretension despite being incredibly bright and well-spoken.

“There’s something really special about a conversational tone,” Hall says. “If you can communicate conversationally, that means you are communicating more directly. That tends to feel intimate to the listener and is a really good way to earn their trust.” 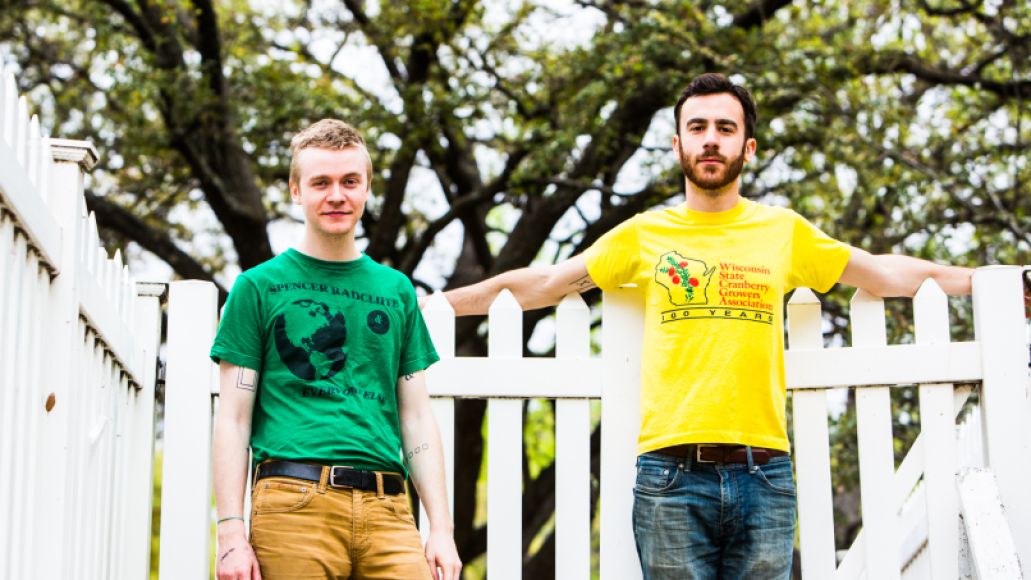 Hall points to this as being the difference between their new album, Cardinal, and the previous output from the band. Hall stands behind everything that Pinegrove has put out yet, as evidenced by the release of a compilation called Everything So Far ahead of the Cardinal unveiling, also finds the new material as getting something particularly right.

“These songs have way more lyrics than anything I’ve ever made,” he says, “and are way more spooled-out and narrative.” He points out the inspiration of everyday conversation in his writing and getting people’s inflections and tones correct, noting the melody that comes in listening to people speak. “This might all signify a wider approach to our band, to try to be casual and direct and approachable. I think you’ll hear that in our production style, and you’ll see that in the way we present ourselves on stage.”

When the band sets up to play the indoor stage at Cheer Up Charlies for the Brooklyn Vegan day party, Hall’s statements ring true. They finish soundchecking five minutes early and are asked whether they’d prefer to take a break or play longer. There is little hesitation before the band resoundingly agree to play longer. 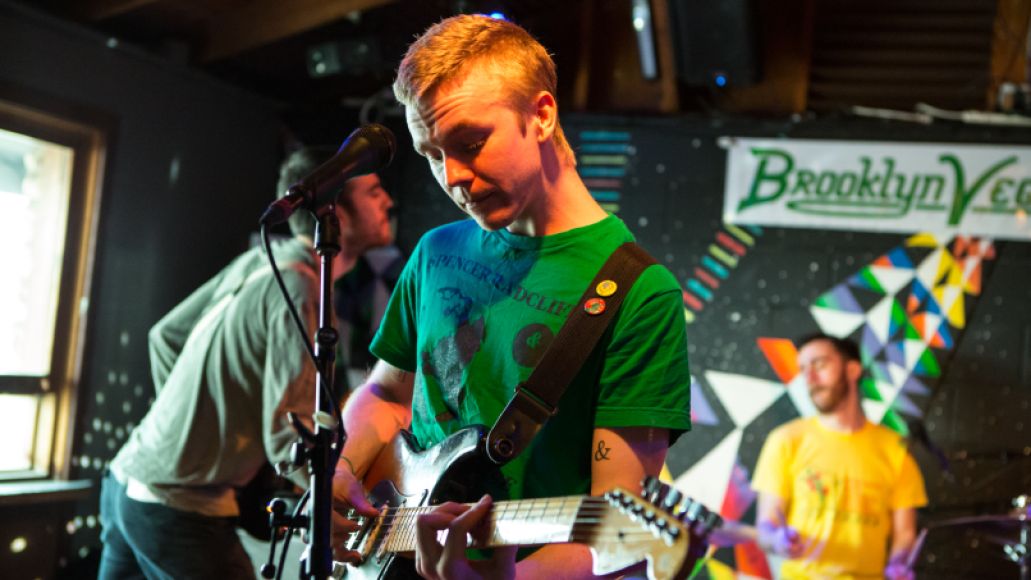 It’s Pinegrove’s fifth show in less than 24 hours at their first ever South by Southwest, and Levine is cautiously optimistic when he proclaims earlier that “it will probably go down as one of the craziest days of our lives, but we hope to never schedule like that again.” But no fatigue shows when interacting with them or watching them perform. They are present in the moment, shouting out friends they see in the crowd, even carefully scheduling our interview time to take in Alex G’s set at the same party.

“Maybe we didn’t realize that being casual and approachable was something unusual until we started playing to bigger crowds,” Hall says, tapping into what makes Pinegrove’s set one of the highlights of SXSW. There’s a collective sigh the audience lets out when Hall unveils the opening line of “Cadmium”, a particularly alt-country slow burner, with something precious in how nonchalantly Hall offers up a song that apparently a lot of people connect with. For anyone experiencing the band for the first time, it’s a first impression made to count. Childhood lessons have been learned, and now Pinegrove is setting their best foot forward.