A copy of what looks to be Arcade Fire’s Reflektor tour rider has made its way online, and while there’s nothing in the way of a homemade guacamole recipe, the rider does include some pretty silly demands.

In addition to backstage staples like fair trade gummy bears, hummus, and vegan hot dogs, the band’s rider asks for “a craft corner with assorted paints and canvas as a creative outlet”; one Garfield “I don’t do Mondays” t-shirt (size large); one bag of “locally produced, sustainable ice”; and a collection of books from children’s author Robert Munsch.

Additionally, “all visible written words must have correct spelling and grammar,” and the band refuses to drink tea steeped from a bag. “Please be vigilant with the tea and make sure it is loose leaf,” the rider reads.

Of course, it’s entirely possible this rider was not to be taken seriously. As we learned via Jack White’s guac-gate, musicians will intentionally make unordinary or unreasonable demands to ensure that the backstage crew thoroughly reads the important parts of the rider.

Then again, I could totally picture Win Butler brewing a pot of loose black chai tea, dropping in a few locally produced, sustainable ice cubes, and drinking it alongside some fair trade gummy bears while wearing a Garfield t-shirt and reading Robert Munsch books.

Update: A representative for Arcade Fire says the rider is “phony,” but we still believe. 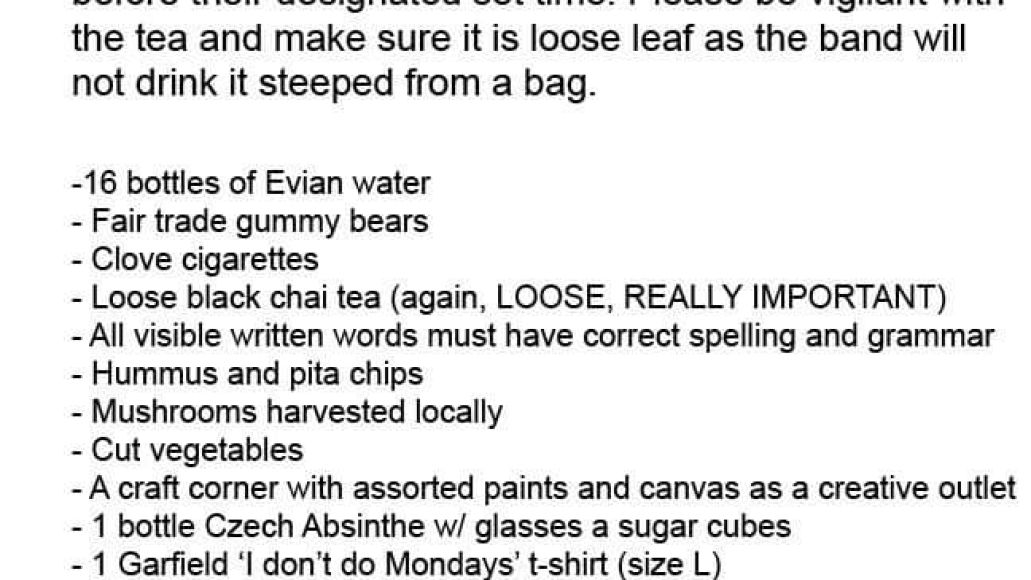