Bargain bins used to cap every aisle in the Wal-Marts and Targets of yesteryear, but these days you’ll find them mostly in prairieland truck stops and struggling video stores. As many of us here at CoS spent more than a few Friday nights hunched over those bins, we decided to scour the Earth for those remaining few. What lies within? Who are they meant for? Are they any good? Welcome to Dumpster Diving.

St. Patrick’s Day is finally here, me lads and lasses – a hallowed time when everyone in America gloriously celebrates the ancient, stereotypically Irish tradition of wearing all green, getting wasted on cheap beer, and engaging in acts of general civil disobedience and recklessness. It’s not the only St. Paddy’s Day tradition in our history, though, as the Leprechaun franchise sought to bring us all together in our assumed ‘90s fears of both little people and the Irish through Warwick Davis’ iconic (and murderous) villain. In this installment of Dumpster Diving, we head into the deepest, darkest caverns of direct-to-DVD obscurity to examine what happens when Leprechaun launches its titular sprite into the stars. 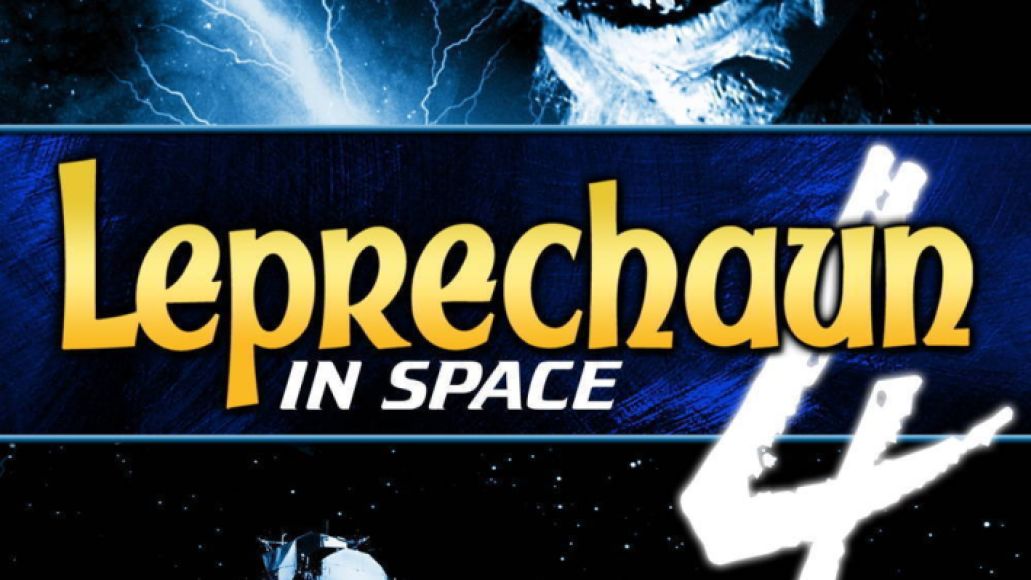 Even cinema on the caliber of Leprechaun 4: In Space is available in full on YouTube! Sure, I had to plonk down the four bucks to watch it (in HD no less!), but hey, I had the Google Play credits. Sue me.

Abandoning all pretense of the Leprechaun being an Earth-bound creature of Irish legend whose insatiable lust for gold gives him an unquenchable thirst for bloodlust and impaling people onto pogo sticks, Leprechaun 4: In Space sees him as a kind of intergalactic trickster god, trawling the stars in search of more and more gold. This time around, he finds himself working out some kind of deal with the buxom Princess Zarina (Rebecca Carlton), wherein they both marry each other and then … kill each other to get … more gold?

Enter a crew of dopey Space Marines, who proceed to kill the Leprechaun and piss on his corpse in a state of virtually homoerotic delight. (“Death from above,” Sergeant Metal Head Hooker (Tim Colceri) growls. He has a metal head, you see.) They haul Zarina and the gold back to their ship, with the Leprechaun hiding in a Marine’s urethra – more on that later – and ready to take his revenge.

Warwick Davis, arguably one of the hardest-working actors in Hollywood, is the only returning character from the rest of the Leprechaun series. Sorry guys, no Jennifer Aniston (who starred in the first) here – just the guy who played Willow slumming it away in one of the few franchises that will give actors of Davis’ stature top billing and a steady paycheck.

Nearly everyone else is the same softcore Skinemax-caliber set of plastic bodies and chiseled white jaws play-acting as low-rent space Marines, the particular exceptions being the aforementioned Sgt. Hooker and Guy Siner’s simpering Dr. Mittenhand, a half-robot German mad scientist who spends all day rolling around like Doctor Who’s Davros and negging his crewmates. Oh, and poor Miguel A. Nunez, Jr. (Deejay from Street Fighter: The Movie) as the film’s resident comic relief. At least he makes it to the end!

JOURNEY TO THE BARGAIN BIN:

Leprechaun 4’s story is the oldest one in the book: horror franchises, particularly in the ‘90s, naturally suffered from diminishing returns and were reduced to increasingly bizarre gimmicks in order to inject some much-needed novelty into later installments. If anything, it was only a matter of time before the Leprechaun went to space; it’s happened to the likes of Jason Voorhees, the Critters, and Pinhead, to name a few. The popularity of space-horror pictures like Alien inspired every horror series that followed to make their iconic monsters creep around dimly lit, gray corridors and be sucked out of airlocks at some point. It was dismal, and it lacked in creativity, but hey, it seemed to work.

Oddly enough, going to space is far from the lowest, cheapest point this series would reach, given the two (two!) Leprechaun: In the Hood movies that followed.

WHY IT REMAINS IN THE BIN:

I’m not one to cite Rotten Tomatoes as the end-all, be-all of a film’s objective quality, and sometimes the Metacritic-ing of film criticism and discourse can stifle honest appraisals of a movie. That being said, Leprechaun 4: In Space has an RT score of 0%. ZERO. Pixels has a higher rating than that. So does Paul Blart: Mall Cop 2. Those numbers absolutely do not lie.

Independent of critical appraisal, Leprechaun 4 is simply a strange, cheesy, and inexplicable animal. A number of movies (all bad) compete for screen time in this bit of micro-budget, direct-to-video schlock. It’s a movie about a demonic leprechaun, a chintzy Aliens clone, an interstellar romance, and a cheap skin flick all at once. All the space Marines are classic meathead dunces, stopping their incessant bro-talk only to sex it up with the lovely Zarina and/or have their dicks eradicated by the Leprechaun.

In Space’s biggest crime is not even getting the Leprechaun right – Davis chews the Styrofoam scenery as best he can, but his character’s normally devilish humor is whittled down to cheap one-liners like “Always wear a prophylactic!”, and his kills aren’t nearly as creative as they used to be. By the time you see him produce a lightsaber from nowhere in a snide shout-out to Star Wars, you’re already confused and tired of In Space’s cynical space shenanigans.

At first glance, the prospect of unartfully shoving a leprechaun into a dime-store corridor crawler might actually transcend its home video trappings and enter into so-bad-it’s-good territory, and the arguments in its favor stack the more you watch it. The Leprechaun sneaks into a spaceship by hiding in a dude’s dick! Said dude refers to his dick as “Mr. Snake” during a sexual encounter! Said dick explodes during a sex scene, so the Leprechaun can escape! The mad German scientist Dr. Mittenhand turns himself into a genetically altered spider and insists he be called “Dr. Mittenspider!” Despite these rare nuggets of fun, though, the whole thing is confusing and drab for long stretches as the bland leads mumble through lame dialogue while we wait for Davis to show up.

The Leprechaun series has never been anything more than a niche horror curiosity, but at least the earlier films felt relatively novel – a curious spin on the adolescent question, “What if the Lucky Charms mascot murdered people?”. The downside for any horror franchise that tries to go to space is that the entries never feel like the thing you wanted in the first place. It’s all just Aliens rip-offs with the titular baddie copy-pasted in place of the xenomorph. In the case of Leprechaun 4, this could not be more apparent, and the film suffers mightily for it.

But who am I kidding? If you were to get high and pop it in with a couple of friends late at night and enjoy the hell out of every increasingly campy kill and ridiculous bon mot from Mr. Mittenhand, you’d be right to do so.