Taking the stage at a theater neither the audience nor the performers had ever been to (their words), Gil Faizon and George St. Geegland kicked off a week of “Oh Hello” performances at Chicago’s Athenaeum Theater on Friday night in their typical style — that style being prescription hospital shoes and the saggiest leather jacket you will ever see. For those unaware, Faizon and St. Geegland are two ornery Upper West Side Jews played by comedians Nick Kroll and John Mulaney, respectively. The origins of “Oh Hello” date back to the now-defunct New York comedy incubator Rififi, but Gil and George’s breakout hit was their WOLO public-access prank show, “Too Much Tuna”, which was one of the highlight sketches of Kroll’s short-lived Kroll Show on Comedy Central. No longer confined to brief sketches, Kroll and Mulaney have turned their extremely niche sights to the stage with marvelous success. “Oh Hello”, and the play held within the play, “We’re Us, You’re You, Let’s Talk”, are master classes in improvisational and referential comedy, with acerbic wit that is less acid tongued and more matzo ball water tongued. 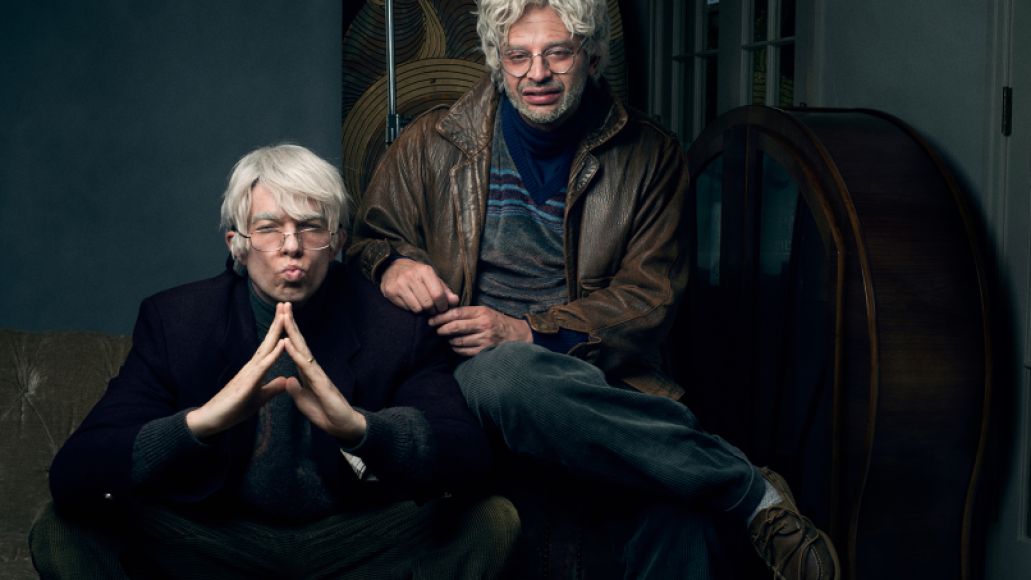 The laughter was near constant from the moment the two first took the stage. The preamble to “We’re Us, You’re You, Let’s Talk” was meandering but never dull, with jokes, physical comedy, and Steely Dan impressions coming at a rapid clip. Even the pronunciation got laughs, with Faizon’s hard lean into the latter half of “whom’f” drawing the first big laugh of the night. Introductions to each character held gems like three wives who all mysteriously died on the same staircase (St. Geegland) and a failed “aurdition” (their pronunciation) for the voice of CBS (Faizon) that would become a running gag for the entirety of the show. Mixed seamlessly into newer material were jokes that longtime fans of the duo will recognize from their numerous appearances on Scott Aukerman’s Comedy Bang! Bang! podcast. Among the oldies but goodies that won over the whole crowd was the reference to Alda News That’s Fit to Print, the pair’s newsletter based entirely around their favorite actor who they legally aren’t allowed within 100 feet of, Alan Alda. Alda-based humor accounts for a large chunk of the Faizon/St. Geegland worldview, which makes perfect sense the more you get to know these weirdos. 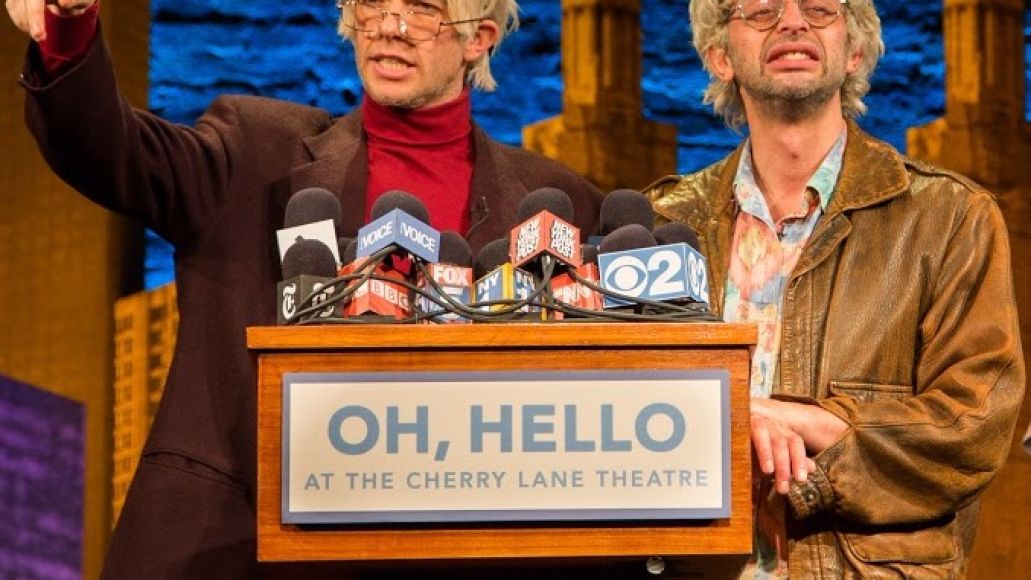 “We’re Us, You’re You, Let’s Talk” started with George reading stage direction about the things he was doing, continuing the night’s deconstructing of theater to its lowest common denominators. Despite seeming nearly plotless, the entire evening served up plenty of sharp commentary on theater as a culture and an entity, lasering in on tropes like the expository one-sided phone call (“The Head of New York One? Is who you are?”) and dramatic fake smoking during dramatic line deliveries. The gist of the play is a loosely fictionalized version of Gil and George’s reality, where they play Gil and George, an actor and a writer, respectively, whose rent-controlled apartment is no longer rent controlled and will now cost $4,000 a month instead of the $75 they’d been paying for 40 years. After searching for creative ways to find the money and failing, the two are near giving up their apartment. It’s at their lowest moment that they must host the final episode of “Too Much Tuna”, featuring surprise guest Robin — a woman picked out of the audience who clearly wasn’t interested in participating. After a brief introduction to Robin, who is a dog walker and lives in one of Chicago’s nicer neighborhoods (which led Gil and George on a search for her more financially successful husband), she was dramatically pranked with an enormous tuna fish sandwich.

This stretch was the most improvisational segment of the evening, aside from the closing Q&A, and Kroll and Mulaney’s ability to work with what little Robin was giving them was admirable and a treat to watch. The audience weren’t the only people watching, as the aforementioned one-sided phone call came through from New York One (“It’s like a worse WGN for New York”), and Gil and George were given a second chance at prank show success, so long as they agreed to have their sworn enemy, Clamato, sponsor the show. If this recap seems scatterbrained and nonsensical, then it is accurately capturing the tone of the play, which was ridiculous from start to finish because, as Gil said as the play began, “plays have no stakes and no ending.” 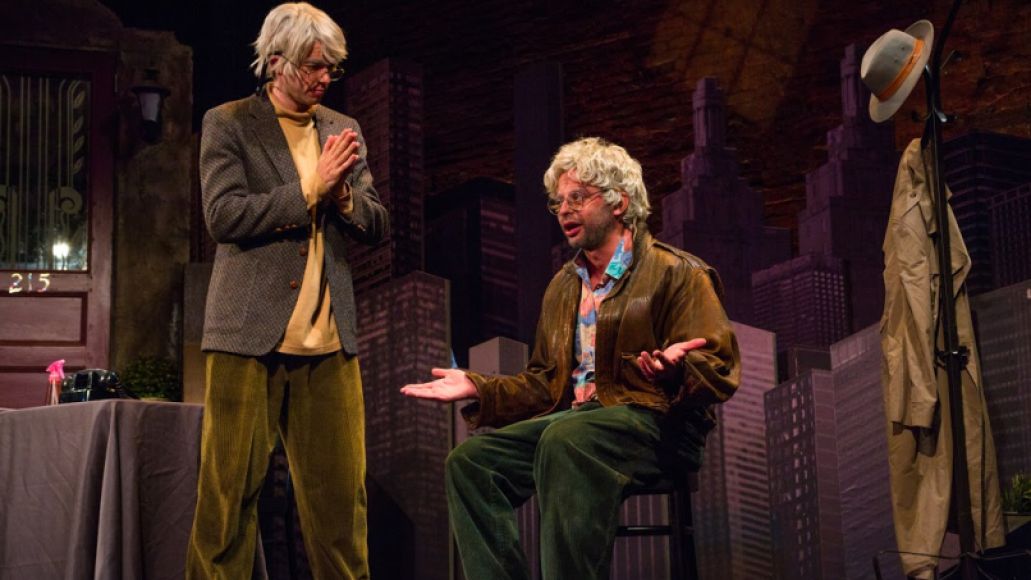 The play within the play wraps up with a succinct breakdown of these men’s friendship. George, after admitting a dark secret that had a huge effect on his friend’s life, apologizes for relentlessly bullying Gil for their entire relationship. Gil then apologizes to George for never having done anything wrong. The two hug, Gil orders them two root beers, and all is forgiven. The whole evening revolves around this dynamic; George is the bitter friend with a checkered past and chapped hands while Gil is the endearing simpleton who is commonly mistaken for a bowl of cottage cheese. Their honey-and-vinegar relationship is a hotbed for comedy rooted both in friendship and stereotypes of old Jewish New Yorkers. Along the way, the audience learned a lot, like how “OJ killed those people so hard that they stopped making the Ford Bronco,” we experienced the most beautiful interpretive ballet two old Jewish men could put on, complete with two minutes of “real-time rest,” but most of all we got to watch two brilliant friends. It’s tough to say who the better comedy duo is, Gil and George or Kroll and Mulaney.