Last summer, Rush embarked upon what we now know was their final large-scale tour: R40, a celebration of their four decades of instrumental virtuosity and unwavering sonic independence. If there’s one trait that has defined Rush throughout their career, it’s been a willingness to follow their shifting muse, both musically and lyrically, without regard for critical approval. In the process, they’ve gained one of the most loyal fan bases in all of music and, at long last, become cool.

However, none of it would have happened without their seminal 1976 record, 2112, which turns 40 this week.

In 1976, Rush was on the ropes. Any momentum they had picked up over the course of their first two albums had been completely derailed by 1975’s Caress of Steel, which contained two epic songs (“The Necromancer” and “The Fountain of Lamneth”) that flopped badly. “I think we were pretty high when we made a lot of that record,” bassist Geddy Lee has said, and you can tell — the songs completely divorce themselves from reality, and even as fantasy stories, they’re as stupid as their titles sound. Flashes of musical brilliance aside, Caress of Steel failed commercially, and Mercury Records threatened to drop the band unless its next album had more mainstream appeal.

But rather than follow that directive, Rush decided to double down. “We got mad,” drummer Neil Peart has said. “If this is our last shot, we’re gonna give it everything, and we’re gonna do it our way.” So they came back with a side-spanning, 20-minute saga loosely based on Ayn Rand’s novella Anthem. Mercury balked but rolled with it, the album hit, and the rest is history. 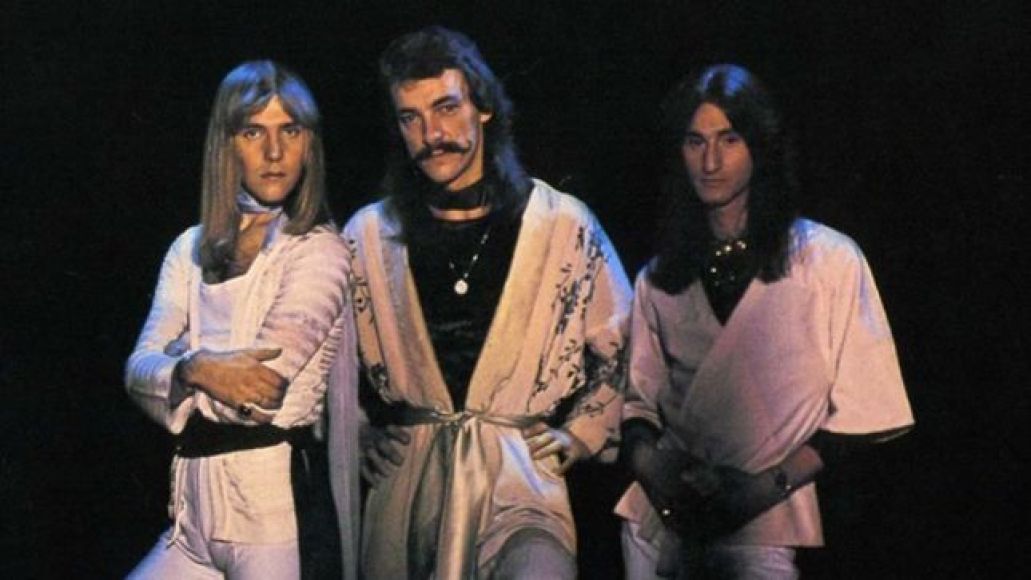 On the surface, 2112’s title track is just as weird as the nonsense on Caress of Steel. The iconic synth swoop that begins the song announces, very definitively, that we are entering the realm of science fiction. The song describes priests of the “Temples of Syrinx,” dream oracles, and the planets of the Solar Federation. How could anyone but nerds relate?

The answer lies in the song’s classic tale of the individual versus an oppressive, collectivist entity. It’s a story that’s resonated with Western society ever since the 20th century introduced technology capable of controlling and policing the masses’ thoughts — 2112’s world doesn’t feel all that different from Winston Smith’s world in 1984 or that of John the Savage in Brave New World. And for added context, the notion of the American political apparatus approaching a Soviet or fascist dictatorship reached an all-time high in the mid-1970s, when Watergate exposed Richard Nixon’s true, paranoid, power-hungry colors and disastrously shook the nation’s faith in government by the people, for the people. (Yes, Rush is Canadian, but Americans were buying their records.) In such an environment, an extended allegory about one person fighting a dystopian regime, having a vision of a better possible world, and then losing all hope carried serious heft.

In a way, 2112’s message isn’t all that different from the rebellious ideology that characterized the burgeoning punk movement at the time. Bands like The Ramones and the Sex Pistols were nearing the apex of their cultural influence in 1976, turning wholly away from the bombast of mainstream rock and embracing the power of the individual to create music — no matter that individual’s musical skill. Punk represented the resentment by the masses of a commercial music apparatus that had abandoned its populist roots; it was a sort of taking back music itself. In this regard, Rush’s mentality going into the creation of 2112 — “fuck it, we’re doing this our way” — matched the rising tide of artistic protest against the “rock establishment,” propelling the band firmly out of the fantastical bubble they’d constructed with Caress of Steel and bringing them before a receptive audience in the real world. In the process, they established themselves as heroes of the misfits, the young people who feel left behind by society. Many of their later standout efforts, from “Tom Sawyer” to “Subdivisions”, express the challenges of individualism first heard in 2112.

Now, Rush is clearly not a punk band. They’re too virtuosic; Peart’s lyrics are too heady. For the most part, they’re rightly placed under the umbrella of progressive rock, and 2112 is perhaps their most enduring contribution to the genre. It features multitudinous stylistic shifts, audibly depicting its protagonist learning the guitar before erupting into a triumphant march as he proudly presents his instrument to the priests, then devolving into a chaotic Alex Lifeson solo as the priests destroy the miraculous, rediscovered relic. Neil Peart’s drum fills have reached legendary status among drummers and air drummers alike. Geddy Lee’s vocal alternation between the plaintive hero and the screeching, evil priests has the epic playing out like an opera.

But unlike much prog rock at the time, which was lost in its own head with high-concept ideas, strange time signatures, airy moods, and a flowering of synthesizers, 2112 rocks HARD, bringing the intellectualism of the genre down to a more accessible level. It’s an album that punk rockers might have made if they had significantly greater instrumental prowess and a preference for the figurative over the literal; it’s an album that progressive bands would have made if they, like Rush, had idolized the fundamental, blues-based riffing of Cream and Led Zeppelin. Young musicians listened to the epic and saw not just the stirring, nonconformist message that shone through the sci-fi trappings: they saw inspiration, a way to make challenging, hard-driving guitar music that didn’t sacrifice personal meaning at the altar of technical proficiency. The widely-held respect that Rush holds within the musical community starts with 2112, which fueled everyone from Dave Grohl and Billy Corgan to Les Claypool and Kirk Hammett.

Most importantly, 2112 represents the success that often comes when an artist is given the freedom to chase their own creative muse, even when that muse leads them directly against conventional, industry-establishment wisdom. It’s no coincidence that this album resonated so powerfully with musicians, misfits, and dreamers everywhere; the epic title song’s concept is really a metanarrative of Rush’s own middle finger raised to the label that wanted them to sound more “commercial.” The band sums its mandate up nicely with the priests’ words during “Presentation”: “Forget about your silly whim/ It doesn’t fit the plan.”

Many aspiring artists doubtless hear that sentiment, but if it were always heeded, the world would miss out on a great deal of genius. Kanye wouldn’t be Kanye if he agreed that the notion of a producer becoming a rapper was a “silly whim.” Grimes’ Art Angels might not have been so amazing if she agreed that making the album entirely on her own, sans outside producers, was a “silly whim.” In today’s highly democratic musical era characterized by the Internet and DIY software, artists are freer than ever to pursue a unique vision — and 2112 is the ultimate encouragement to do so, regardless of how long it takes to perfect or how doubtful commercial interests might be.

Of course, that doesn’t always pan out. But it did for three young Canadians, and 40 years and many successful records later, their magnum opus is still a tremendous inspiration to anyone battling the Solar Federation … er, make that conformist forces.

Zach Blumenfeld is a Chicago-based writer and regrets giving Side B of 2112 the shaft here — it’s fun, but not all that significant. Follow him on Twitter.