One of the great, unheralded benefits of rock stardom: You can show up to an interview visibly hungover and the most anybody else can do is shrug and mutter under their breath, “Well, what did I expect?” That question seems especially relevant with regards to The Last Shadow Puppets, who are in the final, sputtering stages of promoting their forthcoming sophomore album, Everything You’ve Come to Expect. Seemingly intent on proving how few fucks they have to give, Alex Turner and Miles Kane have already made one very bad impression on this publicity tour, and they’re not exactly putting their best face forward here.

When I meet Turner on the sunny patio of the Alcove Cafe in his adopted hometown of Los Angeles, he’s slurring his words and making no effort to hide his North England burr. The guy is clearly in no condition to think critically about the finer aspects of his songwriting, but at least he’s lucid enough to lament the toxins he inhaled last night. “Ah, I didn’t smoke for a week,” he sighs, running his hand through an impressively slick pompadour, “and then it all came unraveled…”

I would feel sorry for him — sorry for putting him through the ordeal of yet another conversation about The Last Shadow Puppets and Arctic Monkeys and a litany of other topics he’s probably sick of by this point — if he didn’t look so damn good, even in his disheveled state. Sporting a gold chain, thick sunglasses, and a stylish black button-up, Turner comes across like the platonic ideal of a rock ‘n’ roll prince. If his journey from likely lad to megastar hadn’t been chronicled so thoroughly since the Monkeys exploded onto the scene with 2006’s Whatever People Say That I Am, That’s What I’m Not, you’d think he popped out of the womb with a stack of platinum records in hand. Call me a sucker, but it’s hard to get too annoyed with someone who has so clearly located his place in the world. And hey, at least he showed up on time. 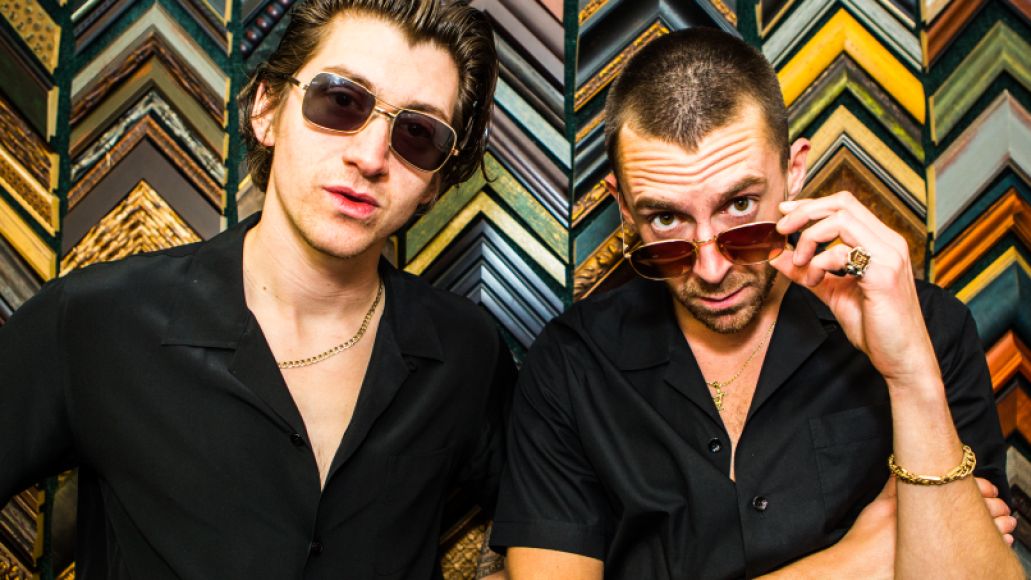 Kane is nowhere to be found, and the duo’s publicist kind of tilts her head to the side by way of an apology; it seems that her modus operandi with these guys is to just roll with the punches — which, it should be noted, never seem to land where you’d expect them. As soon as I decide to just get started without Kane, Turner accidentally Facetimes him from his pocket, and the two erupt into a fit of giggles, our conversation veering off course for the third time in as many minutes.

Turner, 30, and Kane, 29, might seem a little old for these antics, but their friendship has always been based in a kind of low-stakes playfulness. The pair initially became friends when Kane’s former band, The Little Flames, opened for Arctic Monkeys in 2007. “There was a suggestion in the air that we were going to do something together, us two,” Turner remembers about that tour. That “something” ended up being The Last Shadow Puppets’ 2008 debut, The Age of Understatement, a delightfully moody orchestral pop record with shades of British singer-songwriter Scott Walker and Italian filmmaker Sergio Leone. (It might seem odd to compare a rock group to the inventor of the Spaghetti Western, but there’s an undeniably cinematic aspect to The Last Shadow Puppets’ sound — Turner credits Owen Pallett’s string arrangements for the record’s “widescreen feel.”)

More than anything, however, The Age of Understatement was a chance for both Turner and Kane to blow off some steam and bro down a little bit. Everything You’ve Come to Expect feels the same way. It’s not a “statement” album like Arctic Monkeys’ 2013 American breakthrough, AM, nor is it particularly focused. It’s simply the work of two talented songwriters following their interests and not worrying too much about how all those interests mesh. When I mention to Turner that lead single “Bad Habits” has a ‘70s Detroit punk vibe, he agrees, citing the bass line to Sonic’s Rendezvous Band’s “City Slang” as a heavy inspiration. But the rest of the record is all over the map: Turner approximates a Nashville crooner on the country-tinged “Sweet Dreams, TN”, the title track luxuriates in ‘60s psychedelia, and the ghost of Scott Walker still pops up from time to time to say hello (“Yeah, can’t shake that,” Turner admits with a laugh).

If any one thing stands out about Everything You’ve Come to Expect, it’s Turner’s newfound penchant for lyrical weirdness. He’s always been an uncommonly musical lyricist, exhibiting a real taste for how words sound beyond pure semantics. This is especially true on the new record, which is more lyrically playful and abstract than anything he’s written before. “That first Shadow Puppets album was the first time I’d ever considered the lyrics as another component along with the chords and the melody,” he explains. “I made a conscious effort to kind of continue that evolution with this one.” This is how he ended up at such lovely, iambic lines as “The colourama of your eyes takes me on a moonlight drive,” which appears on opening track “Aviation”. It doesn’t make a ton of sense, but that’s not really the point. “I think, not always, but sometimes it’s good to just have the lyrics facilitate a melody,” he muses, getting more lucid as we get deeper into the conversation. “Like, that’s harder to do, I think, than writing the sort of storytelling stuff sometimes — getting the fuckin’ ‘I Am The Walrus’ shit right.”

It’s at this point that Kane finally shambles into the picture, in even worse shape than Turner but dressed just as handsomely. We shake hands, and, before he sits down, he inspects the chair to ensure that it won’t get dirt on his blindingly white jeans. Kane, formerly of The Rascals, is the less famous but more contentious half of The Last Shadow Puppets, a man so self-assured in his charms that he recently asked a female music journalist if she wanted to “go upstairs” in the middle of an interview in a hotel lobby. Still, when it comes to actually talking about, you know, music, Kane tends to defer to his partner. He’s mostly quiet after he arrives, and I get the distinct (and distinctly uncomfortable) feeling that he’s sizing me up. When I mention that the smoky “Dracula Teeth” is my favorite song on the new record, he practically smirks. “Oh, is that your fave?” he asks in a way that suggests he’d rather be anywhere else.

Kane seems to have a special language that he shares only with Turner, and it’s difficult to tell, upon meeting him for the first time, whether he’s making fun of you or trying to let you in on the joke. “You’re helping my mind right now,” he tells me, subtly deflecting another question about music. “The dark mind that I carry around. The dark cloud. I am a dark cloud. Today, I felt like a dark cloud.” The fact that he’s using the past tense at 11 a.m. is troubling enough, but one gets the sense that he might be trying a little too hard to play the part of the classically self-destructive rock star. “I indulged too much last night,” he admits, joining Turner in the self-professed hangover department. “I was really stupid. I just want to have a cry in a sauna. We should have done this in a sauna! Fuck, Collin, why haven’t we interviewed in a fuckin’ sauna?” 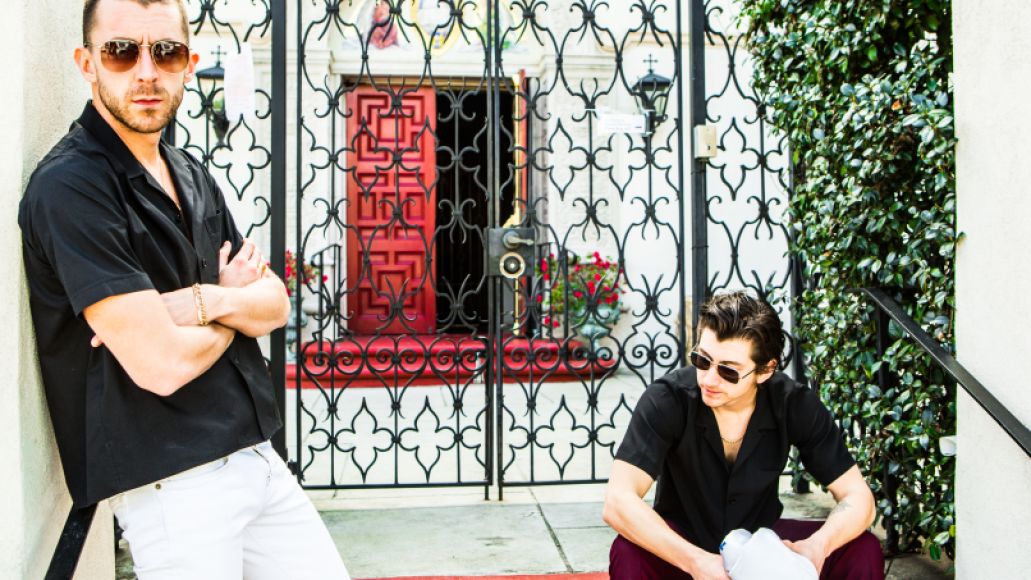 At the time, this proposal struck me simply as funny — endearing, even. But imagine Kane posing the same question to a female journalist, and you’ll see why he’s dealing with a bit of an image problem at the moment. It’s a shame, because both Kane and Turner are ostensibly likable guys who actually do have something to say about their music — provided one has the patience to pull it out of them. They’ll reflect on the fact, for example, that The Last Shadow Puppets is a much different project today than it was eight years ago. For one, the idea of adding lush string arrangements to all of their songs doesn’t sound quite as crazy now that they’re studio vets. “It certainly doesn’t seem as wild that we did the strings this time,” Turner says. “When we were 21, it was like, ‘What the fuck are we playing at?’ But I think that’s what maybe gives these records their ‘thing.’”

In general, though, The Last Shadow Puppets tend to approach their songwriting process in the same casually haphazard way they approach interviews with the media. “We don’t like … jam every day,” Kane says with a shrug. “But there will be little moments, I guess. That’s how it happens. We’re not around the campfire.” Both Kane and Turner have a natural aversion to the word “jam” and to anything that might suggest they’ve had to put any artificial effort into making their partnership work.

“I think at the start, we were just excited to hang out, really,” says Kane, and judging by all appearances, it’s been that way ever since. Everything You’ve Come to Expect is probably meant to be a snarky and/or ironic album title, but there’s something remarkably earnest about the songs these two friends write together. Sure, they may wear their influences a bit loudly on their sleeves, but it’s only because they enjoy playing around with those influences so much, molding and contorting them to make something distinctively their own.

The version of Turner and Kane that comes across on the album is much different from the version you get in person. They just sound like two guys who are stoked to share their record collections with each other and with complete strangers. Shit, they sound like two guys who are stoked to simply hang out, totally unconcerned with all the cool-guy posturing that comes with being rock icons. Their recent behavior may have soured some people on The Last Shadow Puppets for good, and that’s understandable. Then again, this may be a case in which everything you’ve come to expect is somehow not.

The Last Shadow Puppets and the Weight of Expectation