We’ve seen a lot of great films and comedy shows here at SXSW 2016. One film in particular stands out, though, as it focuses on a Chicago legend whom you may not know about. But you’re certainly familiar with his work and the army of hilarious disciples that carry on his wisdom. Del Close revolutionized the world of improvisational humor and sketches by establishing a new set of rules and teachings that strive to reach truth through comedy. We sat down with director Todd Bieber and executive producers Matt Besser and Matt Walsh to discuss their new film, Thank You Del: The Story of the Del Close Marathon, which premiered this week at SXSW Film.

The UCB television show was being filmed when Del Close reached out to say his last goodbye to you. How did that feel, and was it hard to watch that part of the documentary?

Matt Besser (MB): In the very moment of getting the phone call, it was like talking to your dad when he’s dying. It was awful. We were the ones who sent the cameras [to Del Close’s hospital suite] because we were in the middle of shooting our show, and we also knew how important it was for him to have a legacy. Del did want people to know what he did, so that’s why we sent the cameras. I don’t even know what we thought was going to happen to that footage. It just sat on the shelf for years, really. We’re lucky we even found that footage.

Todd Bieber (TB): We found it in a tupperware container with just an enormous amount of VHS and other tapes, because I’d seen a small snippet of it online, but not the full raw footage of it. Our AE put it in, and he was like, “You’re never going to believe what I just found.” It was just really touching to see.

It’s an incredible moment to capture. Del Close seemed sort of like Moses taking his people to the promised land. I went into the movie expecting it to be funny, but I didn’t expect to be moved quite like that. In terms of spreading the message of love for improv and Del’s philosophies, has your approach changed over time?

MB: I don’t think we’re going to sit here and say that we’re like evangelicals and we sit down everyday and go, “How can we spread the love of improv today?” But we are definitely fascinated by improv. I took a lot of acting classes before I took an improv class, and I would be at the end of an acting class and not feel like I had any tangible tools. I would have advice but nothing that was like, “Okay, now I know how to be a better actor.”  After working with Del, you would be like, “Wow, I feel like I really got my money’s worth.” We saw it in the film today, the idea that you can be a better comedian with other people around you. We thought it was important to let the world know that Del gave us that tool. I think a lot of people see improv and think those are just talented people on stage who are just good at doing that thing naturally. But even the best, most naturally talented performer still needs the methodology that Del came up with.

Todd, did you call on some of Del’s lessons when you were structuring and editing the film?

TB: The way that the Harold is taught is it’s three disparate stories that converge in a way that’s surprising, and I think in a lot of ways that’s what I tried to do with this documentary. That it’s three divergent stories about this team from Missouri, Besser and Walsh coming up from Chicago, and Del’s history of coming up during the ’50s until the time he passed away. Those are three different stories that take parallel paths but then all converge at the Del Close Marathon, just like the third beat of the Harold. So it wasn’t specifically modeled off the Harold, but it was taking his vein and applying it.

I thought the inclusion of the Missouri team was interesting because there’s all this archival footage and also established comedian interviews you might have left out so that you could also spend time focusing in on unknown rookies. That could have flopped. It could have went nowhere, but instead something interesting did happen. When you were first building the movie in your mind, what did you think about when you spoke to these Missouri players?

TB: I mean, to be fair, I followed 10 different teams that did flop. The Missouri team had a great weekend of partying, and I think it was interesting to watch them struggle, but we all have that first time of trying to do something. To see this art form through those eyes, even when it didn’t start out great, you see it’s an art form that takes practice. Watching it fail with people who aren’t as trained is just as important to see. And then you see these guys do it brilliantly. To see how Michael and his group just kept working and hoping to eventually get to that point. I think just following them over the course of a few days and having that mini journey shows what Del spoke about in the movie, that we have stars and dancers who perform for us, they do these things that we can but choose not to do. I think at this point, it’s hard to tell the story of like Bill Murray and be like, “Well, you know Bill Murray was bad at first, and Chris Farley was bad at first, and these guys were bad at first.” But to see a real-time group of people be bad at first and then start to grow, it’s like, “Oh, anybody who works really hard and studies can start to have some success.”

MB: I get bored with documentaries. But in the final draft of the film, we included some of Del’s peers dissenting that he created the form by himself, and we do show people bombing. I feel like I’ve seen documentaries about bands that I’m a fan of, and it’s just completely positive all the way through, and then by the end, I’m kind of bored by it. I’m glad in the Pixies documentary there was a drug problem on the reunion tour or else that documentary would not have been as interesting. We didn’t know they were gonna bomb, but of course they bombed, and it’s great we saw them bomb, or it wouldn’t have seemed realistic. 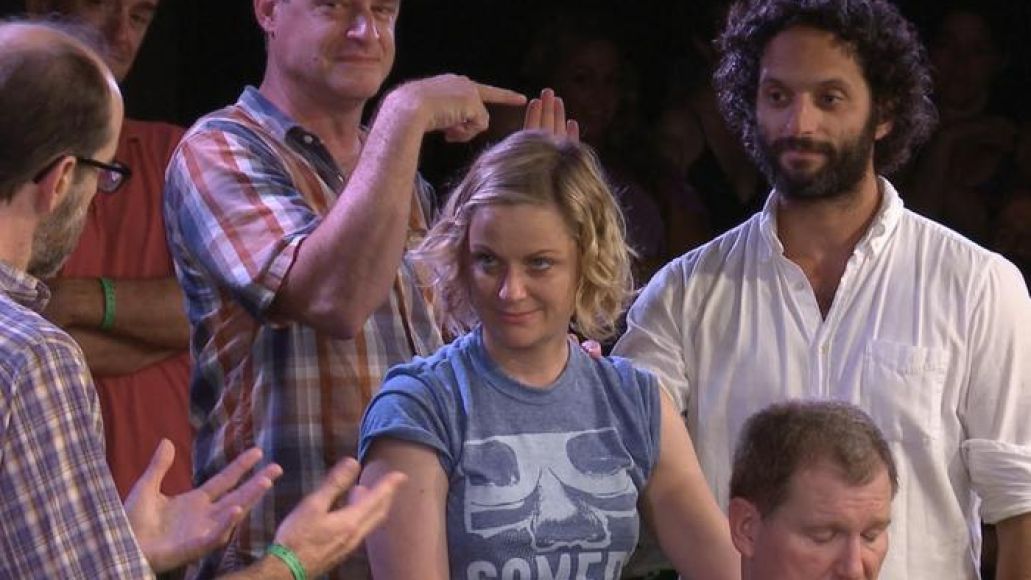 Even though it’s a documentary film, it’s great how the story worked out that way. I did find it interesting that you chose to include the footage of Del’s former teammates at The Committee questioning Del’s achievements.

Matt Walsh: I love The Committee stuff. I actually got to work with Howard Hesseman on a movie a few years ago that is never going to see the light of day. Shirley MaClaine is actually writing a book about that movie. How crazy is that? We did a movie in Spain for two months, but the money and budget situation was crazy. It was illegal and corrupt, but Shirley MaClaine was there — and Jessica Lange and Demi Moore — and they all got on a plane without getting paid basically. So cut to two years later, and the movie still hasn’t come out, but Shirley MaClaine is writing a book about the making of that movie. Isn’t that crazy. Isn’t that weird?

Did you ever get paid?

MW: I did but it was like a day rate or something, but these were like real stars. They were supposed to get paid, and I don’t think they ever got paid. But I got to work with Howard Hesseman, and we ended up talking to him a lot about Del because he was such a part of that movement, and it’s great to show the divergent points. Those Committee guys probably stayed in LA, and Del went back to Chicago. I like tracing the history and connecting the dots. I think that’s fascinating.

I believe you mentioned it in the film, that The Committee troupe got to a certain point, but then Del took the form even further, and they were maybe having trouble recognizing.

MB: Yeah, I did. Right after Del died, I did a lot of panels with some of those guys, and I started to go, “Wow, some of those guys are really bitter about Del, and it doesn’t seem like they’re here to support Del’s legacy; in fact, they’re doing the opposite.” And I would ask them what a Harold meant back then and what they would describe sounded more like performance art to me, frankly, and not what he had developed. So that’d be like the Wright brothers saying they invented the rocket ship.

MW: But it’s also because Del’s legend and reality are always at odds. It’s great to have their perspective because it’s always like, “I don’t know if it’s true, but I heard…”

The Committee also gives insight into Del in a birds of a feather flock together sort of way. You can kind of imagine them all feeding off each other but also developing tension. I found Del’s story about the acrobatic skydiver having his parachute fail but continue to tumble and entertain as he raced to certain death was very emotional. But it also left me feeling motivated. It was such a pearl of wisdom.

TB: We did a test screening of it, and somebody in the audience who was dying of cancer asked me for a transcription of that quote. She was like, “I’m dying and I want to read this everyday.” Del has so many little gems like that.

The Making of Thank You Del: The Story of the Del Close Marathon