I’m sitting across from Jordan Peele and Keegan-Michael Key, the creators and stars of Comedy Central’s Key and Peele, to discuss Keanu, their feature-film debut that’s equal parts Scarface and Animal Planet’s Too Cute. The venue for our discussion is Oakland’s Cat Town Café, where felines have free reign to dash between our legs and a replica of Oakland’s skyline made out of cat furniture runs the length of the room.

The two comics seem at home in the bizarre setting as they explain how to make a comedic action movie without letting it lapse into spoof territory.

“There are a lot of great spoofs that have been done,” says Peele, “but we just relished the opportunity to make a movie that had our favorite things from some of our favorite genres of film, but was also its own thing, its own phenomenon, and its own movie.” 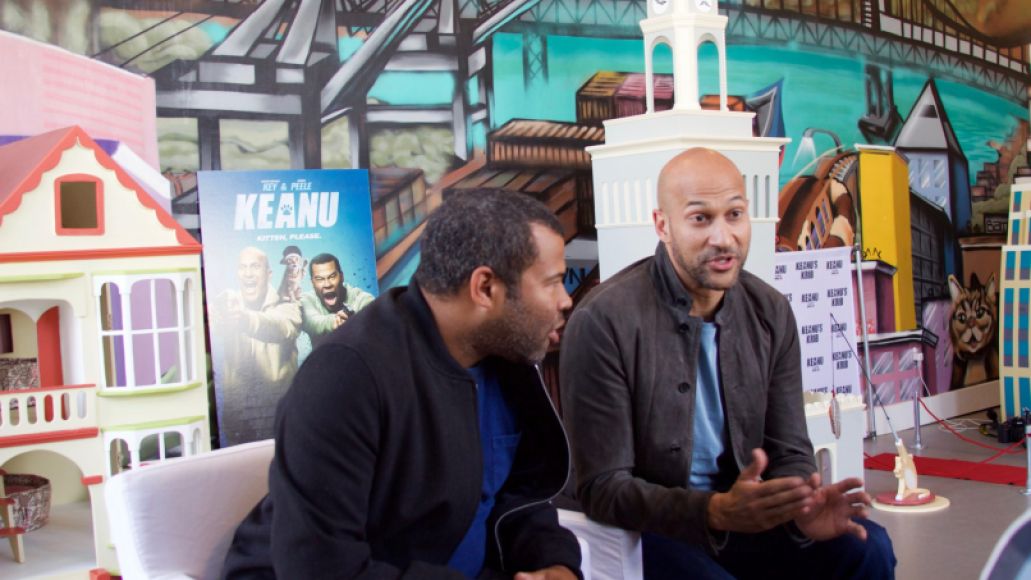 “It’s a spiritual cousin to a movie like Hot Fuzz,” adds Key. “You know, where the story keeps you engaged and intact, and you care about the characters, but it’s clearly homage.”

Hot Fuzz is sure to come to mind when fans finally see Keanu, hitting theaters on April 29th. Both films expertly play with the tropes of action films while still serving more as a tribute than an out-and-out spoof. Keanu is more than an action movie with an adorable kitten in a do-rag, though; like the work Key and Peele did on their acclaimed television show, the film mines stereotypes like the hyper-masculine gangster to great effect.

Never ones to take the easy way out, Key and Peele each play two characters in the film: Clarence and Rell, the suburbanite, George Michael-loving protagonists trying to rescue their kitten from the clutches of the Blips (read: a Bloods and Crips hybrid) gang and the Allen Town brothers, two cold-blooded killers who set the film’s action into motion. Peele argues that in truth, he and Key actually play three characters, as Clarence and Rell adopt the monikers Shark Tank and Tectonic in their efforts to infiltrate the Blips and find Keanu. 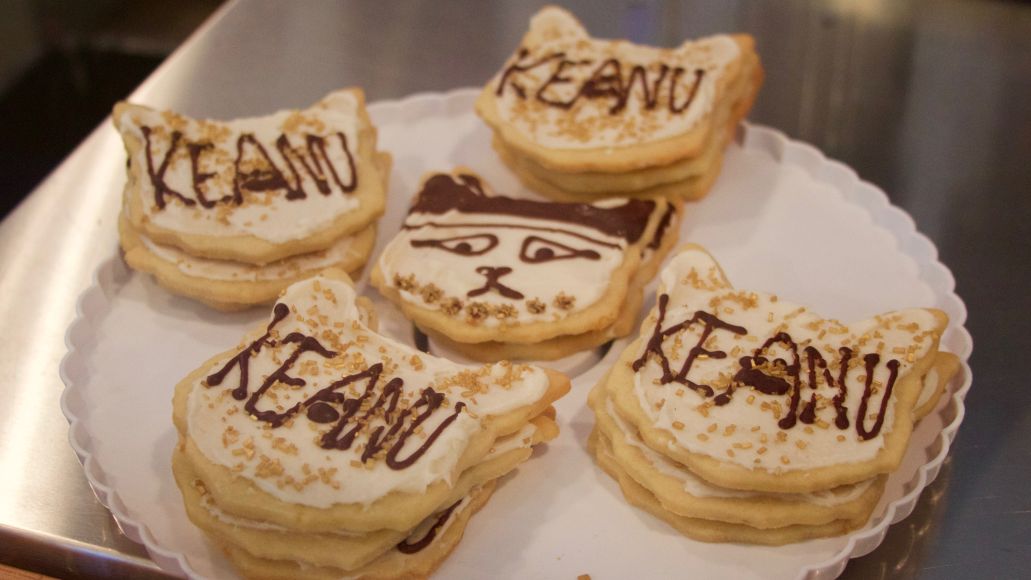 “I think part of [the decision to play more than one character] was to do a little bit of a shout-out to the idea of a comedy where somebody plays multiple parts, and certainly the sketch show where we’ve had the fun and experience of doing that.”

Peele also notes the influence one of the Coen Brothers’ early films had on their choice to cast themselves both as good guys and bad guys. “You know Raising Arizona? There’s the protagonist and antagonist — Nic Cage and then the bounty hunter [Randall Cobb] — who are kind of two sides of the same coin. So we wanted to make the Allen Town brothers like our evil doppelgangers, what we wish we could be in our hardest of hearts.”

“We are our super egos,” says Key, “and we wanted those characters to be our id.”

Not everything in Keanu is Freudian discourse, though. At its heart, the film is a comedy, ripe with guest turns from the likes of Rob Huebel, Will Forte, Luis Guzman, and most memorably, Method Man as Cheddar, a key cog in the Blips who takes Keanu as his own after mistakenly robbing Rell’s home instead of the drug dealer’s next door. While a tight budget meant that Key and Peele didn’t have much time to joke around on set, they managed to carve out a few moments to try and get one of the Wu’s core members to break. 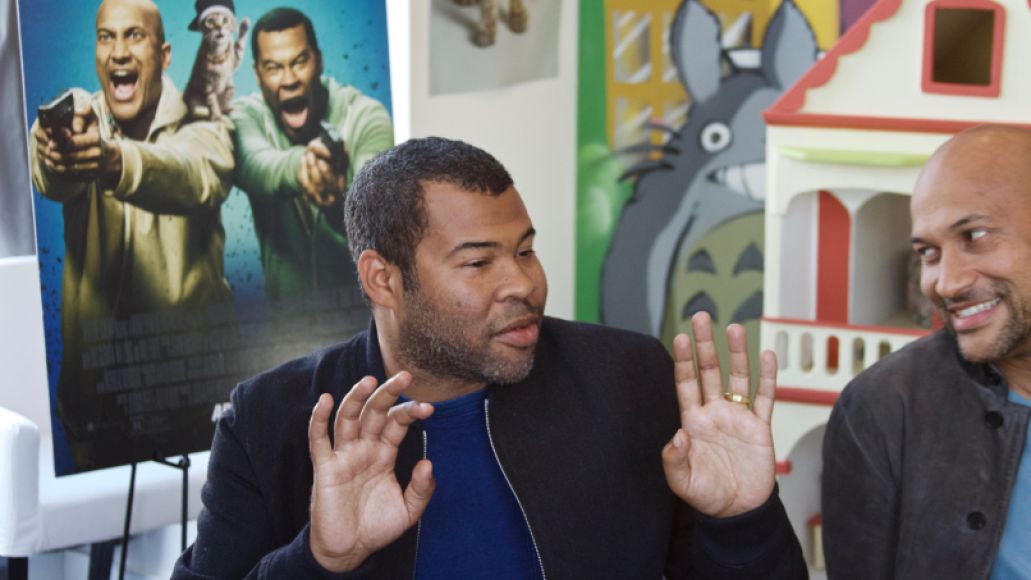 “Whenever you have somebody in a scene whose whole job is that they have to be serious the whole time for whatever you do, it’s almost like a challenge,” says Peele. “The audience gets to live vicariously through that, and you know, when we’re improvising, that’s when we’re having fun. It’s basically a competition for Keegan and I to try and make Method Man laugh.”

“As long as we were doing it within the context of what the scene was,” adds Key. “If the scene lends itself to that, then you can go ahead and do that, but we couldn’t wholesale just start screwing around.”

Hearing Key and Peele talk about their craft so genuinely while a cat-sized replica of a taco truck with the words “Taco Por Los Gatos” sits just to my right is exactly the juxtaposition that makes the two of them such masters of their art. Like Dave Chappelle before them, Key and Peele are both thoughtful and hilarious, a deadly combination in a time when the vast majority of comedic films amount to two-dimensional punchlines and non-existent story lines.

Keanu is not a subtle film: there are samurai swords, cocaine paw prints, and a hefty body count. But where other movies might let these elements suffocate the story, Key and Peele are able to reign in the crazy while advancing the plot, a skill no doubt honed from their years writing sketches both for Key and Peele and earlier on MadTV.

Indeed, as our conversation concludes, they admit that despite their best efforts, it was necessary to leave kitty puns out of the script in the name of keeping things moving along.