This op-editorial originally ran in April 2014.

Welcome to Answering Machine, a column where Editor-in-Chief Michael Roffman (@michaelroffman) voices his opinion on the latest top headlines, which might include new music, various controversies, and publicized conflicts. He’s likened this to a Town Hall discussion of sorts, so please feel free to voice your own two cents below.

Twenty years ago, Kurt Cobain killed himself. He wasn’t murdered. There isn’t some private island that he lives on with Elvis Presley and Marilyn Monroe. No, he’s dead, and his death has been covered, sensationalized, iconicized, and even privatized if you want to argue the economics of the Nirvana estate. Only recently has it occurred to me that I’ve never shed a tear over this. It’s not that I don’t care. Nirvana’s still one of my all-time favorite bands, and my first tattoo is even a drawing of Cobain’s (much to the chagrin of my fiancée and every other girlfriend before her). I just never had any emotional connection with him that way.

At the time of his death, I wasn’t even 10 years old yet. Instead, I was this bratty nine-year-old that obsessed over NES games, Han Solo, and my VHS copy of Michael Jackson’s Moonwalker. I knew about Cobain’s music, I loved humming “Come As You Are” after watching the video with my older cousins, but I didn’t exactly worship the guy. However, I do remember everyone around me saying things about his death. People were hurt, and every time I turned on the television I’d catch little bulletins here and there, mostly thanks to my fascination with MTV’s Liquid Television. You’d think this would have made an impact; instead, I went out and bought Green Day’s Dookie. 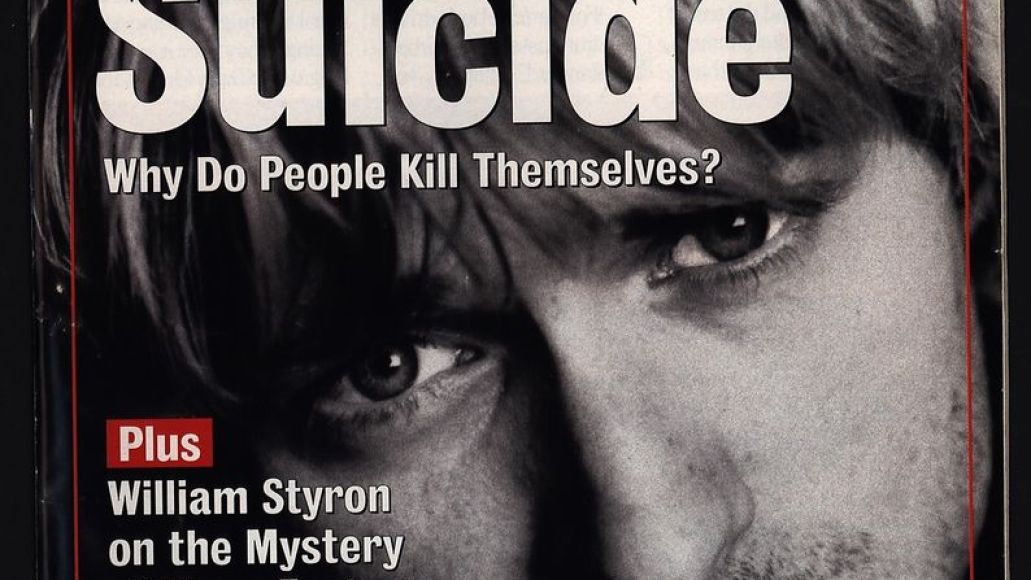 My interest in Nirvana surfaced years later, when I started to evolve from a child into a teenager. My mother’s boyfriend bought me Nevermind, and I thought he was incredibly cool because of it, even if he later cheated on her with a transsexual prostitute in a desolate parking lot. Yeah, long story. Regardless, there’s a reason I’m talking about all of this now, and it’s not to wax nostalgic over the importance of Nirvana or regale everyone with personal wisdom from hearing “On a Plain”. As Pitchfork’s Stephen Deusner posited earlier this week, there’s really nothing left to say about Nirvana. Rather, I’d like to discuss my thoughts on suicide, a particular exit strategy I learned from the late guitarist.

Now, my early infatuation with Cobain was what some might consider unhealthy. At the age of 14, I scrounged up every album, sought out both online and physical bootlegs, saved random .jpgs I thought were cool to my hard drive, and studied whatever books were written on Cobain and any bands that were tied to him. One particular purchase was this cheesy poster from Sam Goody, which I hung proudly over my bed. Every morning I’d wake up with Cobain slouched over his guitar, his silver mop of bleached hair always glaring from the sun that poured through my bedroom window. 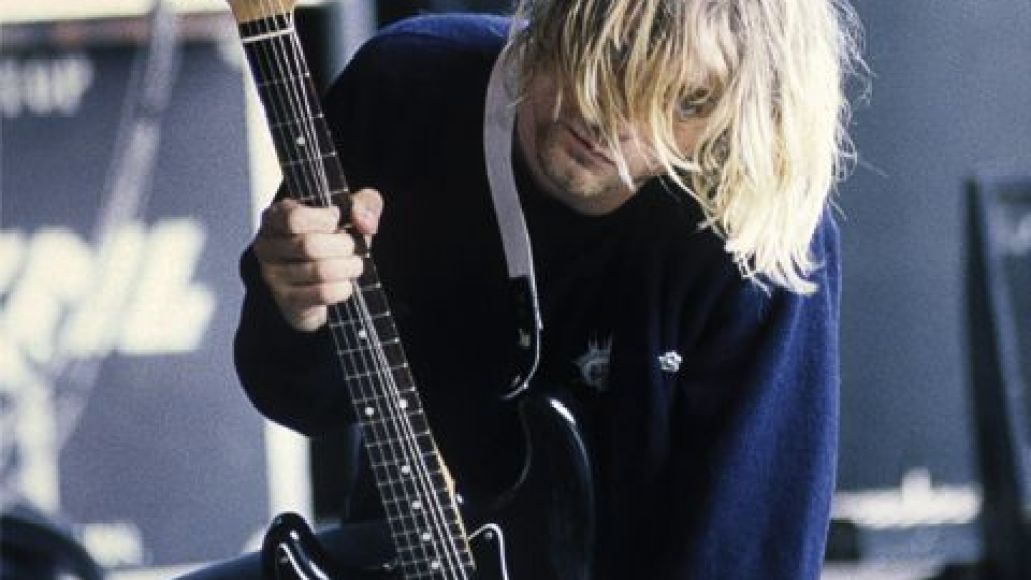 “What the hell’s that?” my father prodded. Kurt Cobain, I told him. “Christ, he’s a fucking loser, Mike.” Of course, I fought back, defended Cobain as if I was his litigator, and gave my dad my two cents (and likely a temper tantrum that, in retrospect, was unfair and very unbecoming of me). I couldn’t believe my father, a former musician himself, would stoop to that level and do the cliché thing and lambast his kid for his music tastes. But, it had nothing to do with the music, and I didn’t realize that then. He was talking about the suicide.

Personally, I think people are narcissistic pricks when they call suicide victims “cowards” or their actions “selfish.” Nobody has a right to insist anyone does anything with their lives, and if someone wants to check out, and they actually carry on with the deed, who’s to say otherwise. Now, that doesn’t mean I’m sitting here and saying it’s A-OK to go out and swallow bleach, attempt to clasp your lung with a belt, or swallow pills in agony. Though, I’m not exactly singing “Teenage Suicide (Don’t Do It)”, either. It’s a fickle topic that I’ve tormented myself over for years, and it begins with Cobain.

Ever since I finished Nirvana’s discography and decided to head down Cobain Ave., I’ve assumed many of the mantras that Cobain preached. (Well, “preached” isn’t the right word, since he always rejected the idea of being the poster boy for any statement, but still, you can’t watch his interviews as a teenager without nodding in agreement and mentally jotting down notes.) While some kids evolve their rebellious egos naturally, I soaked up my own antagonism from whatever tangible pieces of pop culture I could get my hands on, and that just so happened to be Nirvana. This included everything from questioning authority to hating mainstream culture (how ironic) to even considering suicide as a viable option.

It’s true. Over the last 15 years, I’ve subconsciously concluded on multiple matters that if things are too rough to handle, there’s always the plug to pull. Only recently, while revisiting Nirvana in light of Cobain’s death, did I come to this realization. Part of the reason is because it’s just been hardwired into my psyche. As early as eighth grade, I recall going from Point A to Point B to Point Suicide. A girl crushed my heart? Death. I failed an important test? Death. I hate myself and I want to die? Exactly. This macabre chain of thinking has led to some pretty awful decisions on my part, in addition to a stunting me emotionally. And yet, I still do it.

The thing is, I never think too far into it. It’s always how, then when, and whether I’ll actually go through with it. By the time I get to step three, I’ve either exhausted myself emotionally, or I’ve grown bored with the feeling. But when I really dwell on the idea, I realize that regardless of my control, I’m really letting myself go. This isn’t a Tom Sawyer situation where I’ll be able to see my own funeral, pop out, and say, “Surprise.” No, it’s forever; you’re a goner, dude. “Duh, you moron,” you might say, and I’d chuckle and agree, but when you’re in that manic episode, you can only think about how much you don’t want to be around yourself anymore and also how much of a statement you’re willing to make. And then that’s when I realize I’m a.) thinking about this for the wrong reasons and b.) acting like a selfish coward.

Unlike my childish downward spirals, Cobain didn’t kill himself for any particular commentary. We’ll never know why he did it, even if we agonize over each and every word in his mysterious suicide note, but it’s doubtful he pulled the trigger to make some grand banner statement. I mean, it could be, anything’s possible, but it’s essentially speculation on our part. And that’s what haunts me most upon revisiting Cobain’s death: the intimacy of suicide. It really does boil down to you and an empty room, and whatever happens gets lost in the ether, your story forever an ellipsis. When I think about that, I try to imagine a compelling book, the only print in existence, and it’s missing an entire chapter or two or three. And when I relate that metaphor to Cobain’s life, and yes, even mine, that’s when I really get terrified.

That’s when the tears finally come.