“I think I’ll save suicide for another year,” sings Scott Hutchison on “Floating in the Forth”, the penultimate track of Frightened Rabbit’s 2008 album, Midnight Organ Fight. It’s not exactly the most uplifting lyric, offering just a glimmer of hope in an otherwise extremely dark place. But in the grand scheme of the Glaswegian rock band’s catalog, it might be one of the most optimistic lines Hutchison has ever written. The frontman and lyricist has a proclivity for writing morose songs, even if the topic in question is anything but.

The band’s latest album, Painting of a Panic Attack, is filled with such songs. In “400 Bones”, perhaps Hutchison’s most straightforward love song to date, he refers to his lover as “two hundred perfect bones.” It’s just as morbid as anything else in the band’s catalog, but there’s beauty in the gloom. This seems a perfect lens through which to view the band’s fifth release in a career spanning more than a decade.

Of course, we almost never got here.

“I think when we finished the tour for [2013’s] Pedestrian Verse, there was a big question over whether or not this record would happen,” explains guitarist and keyboardist Andy Monaghan.

“It wasn’t so much a question, but rather an unspoken thing,” Hutchison adds. “I think we all knew that the best thing that could happen was to step away from it.”

And step away from it they did. Towards the end of an extremely long and drawn-out world tour, it was clear that things were unraveling internally. The band was more popular than ever, riding critical acclaim to sold-out rooms across the world — rooms bigger than they could ever have imagined playing.

Over-exhausted and riddled with anxiety, Hutchison released a solo record under the moniker Owl John. He had the help of bandmates Monaghan and Simon Liddell, but he toured completely alone onstage. In the process, Hutchison also moved halfway across the world to Los Angeles to live with his girlfriend. And he wasn’t the only one making changes: Grant Hutchison — Scott’s brother and Frightened Rabbit’s drummer — completed a 1,100-mile charity bike race around the entirety of the United Kingdom, and bassist Billy Kennedy focused his efforts in the kitchen, becoming passionate about cooking. 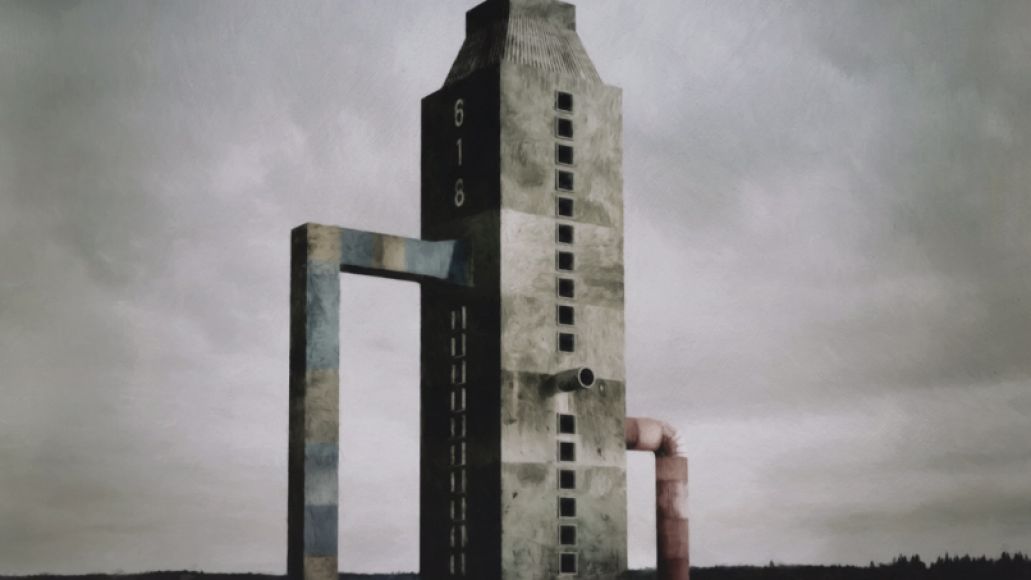 The ability to step away from the band and focus on other endeavors heavily contributed to the success of Painting of a Panic Attack, which represents a departure of sorts from the trademark Frightened Rabbit sound. Now incorporating synths and electronic drums — two elements also featured on the Owl John record — the band jokes that they’ve made an R&B album, though the differences are much more subtle. Produced by The National’s Aaron Dessner, the record feels more focused and more to the point.

“Although in some ways the new stuff is a slightly different sonic landscape and a departure, there’s a familiarity there,” says Hutchison. “It’s not like we took a major step into the darkness or into electronic sound. If anything, as opposed to being too heavily weighted on the synthesizer, the live show weighs more in favor of the rock band element of each song.” The extended instrumental outros may be gone, but Painting of a Panic Attack represents the band at its most anthemic, with more high-flying choruses than ever before. “I don’t want us to not be a rock band,” Hutchison notes.

Interestingly, as the music trends in a new direction, this record features the most first-person lyrics from Scott Hutchison since the band’s ultra-personal 2006 breakup record, the aforementioned Midnight Organ Fight. Though “I” may be used more here than on any of Frightened Rabbit’s first four albums, Hutchison doesn’t want the listener to view him as the main protagonist. “For me, the best thing that could happen when someone listens to us is if they don’t put me in the lead role,” he explains. “I’d rather they put themselves into a situation rather than a little movie in which I have the lead role.”

Even if he does sometimes place himself at the forefront, Hutchison isn’t concerned about people misinterpreting his lyrics. “That’s not a worry. It’s one of the great things about releasing music,” he clarifies. “The many different ways a thing can be interpreted once it’s seen or heard is part of the amazing thing about art.

“I think that I no longer have ownership over it — none of us do — and that’s a brilliant thing. That sort of means it can take on its own life, and it could mean something different to everyone who was in the room last night or at future shows. It’s got a very fluid existence, and that keeps it alive. It shouldn’t belong to us anymore, and you have to let go.”

On Pedestrian Verse’s “Oil Slick”, Hutchison remarks that “Only an idiot would swim through the shit I write,” but it’s hard not to delve deep into his lyrics on Frightened Rabbit’s latest collection of songs. Hutchison’s “I” is now more metaphorical and less rooted in real experiences, but tracks like “400 Bones” and the acoustic closer, “Die Like a Rich Boy”, have a very personal feel.

For someone who writes about extremely private details of his life, Hutchison doesn’t let his emotions get in the way of his live set, even if it is tough at first. “What tends to happen is, the more you play these songs live, the original sentiment gets beaten out of them through repetition,” he explains. “It’s a mixture of being exhilarated from playing new songs and having a reasonably clear memory to what was happening at the time. That combination will disappear after five weeks of touring, I’m sure, but there’s nothing that makes me feel awful or anything. The whole point of it is to put these somewhat upsetting details of your life into an uplifting setting, and it uplifts me as well.”

Maybe that uplifting feeling is what ultimately got the band to finish Painting of a Panic Attack. It’s not an easy album to digest — no Frightened Rabbit album is — but it’s a rewarding listen, a record whose lyrical complexity forces multiple listens.

It also lends itself to multiple interpretations. “Still Want to Be Here” is about Hutchison’s negative feelings towards Los Angeles in relation to the love he has for his girlfriend, but it may as well describe the band as a whole. No matter how tough the recording process was or how frayed the band’s relationships became towards the end of the previous album cycle, they still want to be here, morbid lyrics and all. That’s something all of us can be thankful for.