Beyoncé’s sold-out, Saturday night show at the Houston Texans’ massive NRG Stadium really wasn’t the hometown tribute many fans might’ve anticipated. Sure, DJ Khaled brought out Swishahouse core MCs Paul Wall and Lil’ Flip for “Still Tippin’,” and Bey’s set did feature a few H-Town shout-outs, including one to close friends and family in the house. But sissy Solange didn’t ever strut into the spotlight, hubby Hova stayed in the shadows (if he was even around), and, though Destiny’s Child got some sonic nods, no previous collaborators appeared. But the pop star’s mere presence was tribute enough itself.

“If you didn’t know … I represent Houston, Texas,” she harped, drawing deafening cheers before launching into relevant queen theme “Bow Down”.

The enormous outpouring of local love did add impact to video clips of childhood handicam footage spliced with scenes gleaned from the gripping visual scheme of sixth studio album Lemonade. On the surface, these elements portrayed the recently launched Formation World Tour as a celebration of the masterful marriage between her personal identity and larger-than-life persona. 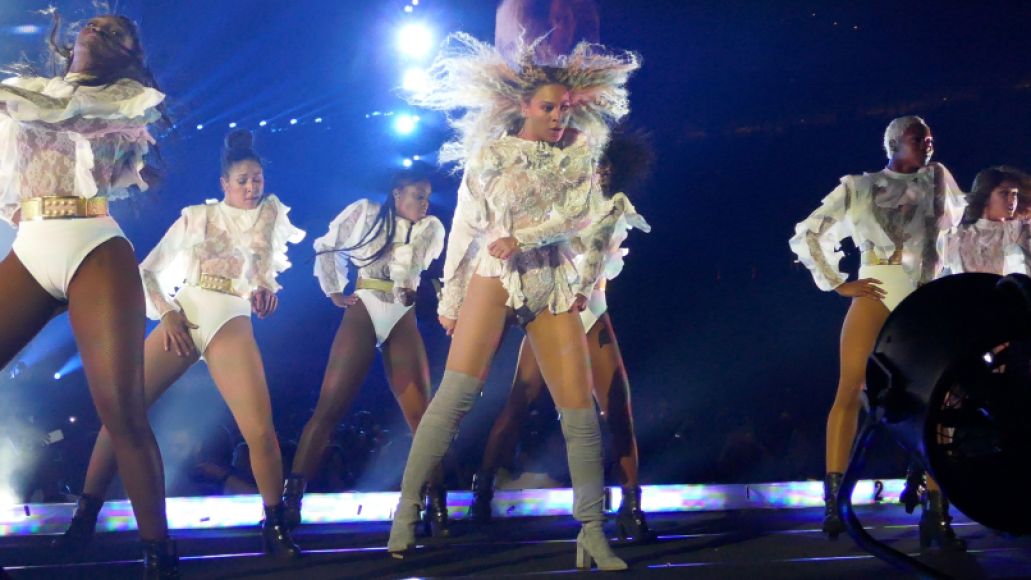 Yet, similar to the new record and its accompanying featurette, the show’s multifaceted message ran much deeper. I fully acknowledge and appreciate that as a white male, there are elements of that scathing and empowering No. 1 masterpiece (and Beyonce’s music in general) that I can’t fathom; I will never have the experience of a Southern black woman. But this production smartly casts a more universal net.

Yes, “Formation” refers to her “ladies [getting] in formation,” which happened right off the bat when Queen Bey – donning a wide-brimmed hat and the first of many flashy, high-thighed leotards – brought her dozen-strong female dance crew straight down the runway to the central satellite stage, flailing fiercely in fans’ faces and commanding them to “slay!” 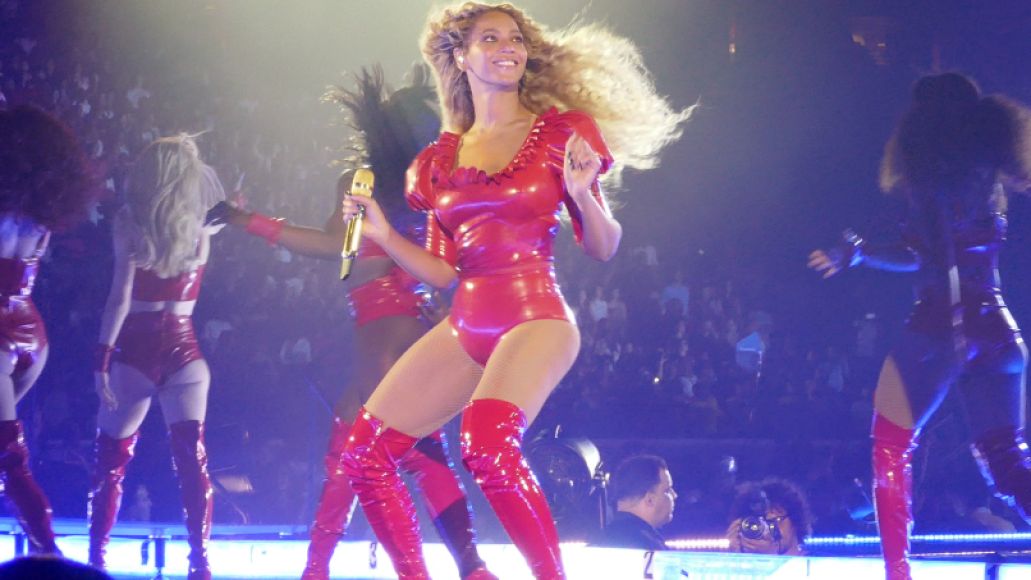 She went on to do that herself: Like Lemonade, the show’s setlist makes some room for the cycle of grief surrounding infidelity. Slower songs like “Hold Up”, “Rocket”, and “1+1” showed the 34-year-old star is often strongest at her most vulnerable moments, vocally immaculate with no backup singers, even in front of 70,000 screaming people. But most of the song selections honed in on the album’s overarching darkness and aggression. The exhilarating heaviness of standouts like “Don’t Hurt Yourself”, cut w/ a mosh-worthy snippet of Kanye’s “New Slaves”, “Run the World (Girls)”, and “Ring the Alarm” – which included an ominously slowed-down sample of “Independent Women Part 1” – helped fuel a predominately raging 30-song run.

Fundamental to all that was a center-stage rectangular monolith, deceptively simple in design, wonderfully complex in execution. As a simultaneous symbol of independence, solidarity, strength, leadership, power, and evolution – and possibly more – it felt equal parts tribute to Space Odyssey and Roger Waters’ The Wall. The video-screen surface started as a dark, blank slate, began flashing images from Lemonade, and throughout the show continually turned, morphed, and opened at points to reveal hidden enclaves, suspended dancers, and blinding bursts of pyro. It even served as a memorial for Prince when, as the lights went out mid-set, it lit up deep violet and a recording of “Purple Rain” blasted outward as countless swaying cell phone screens illuminated the cavernous stadium. Kanye West should take notes for his next venture: without confusing the senses or piling on convoluted, overly artsy ideas, she painted a portrait of herself as artist, wife, and independent woman — one entity, all elements inextricable, totally convincing. 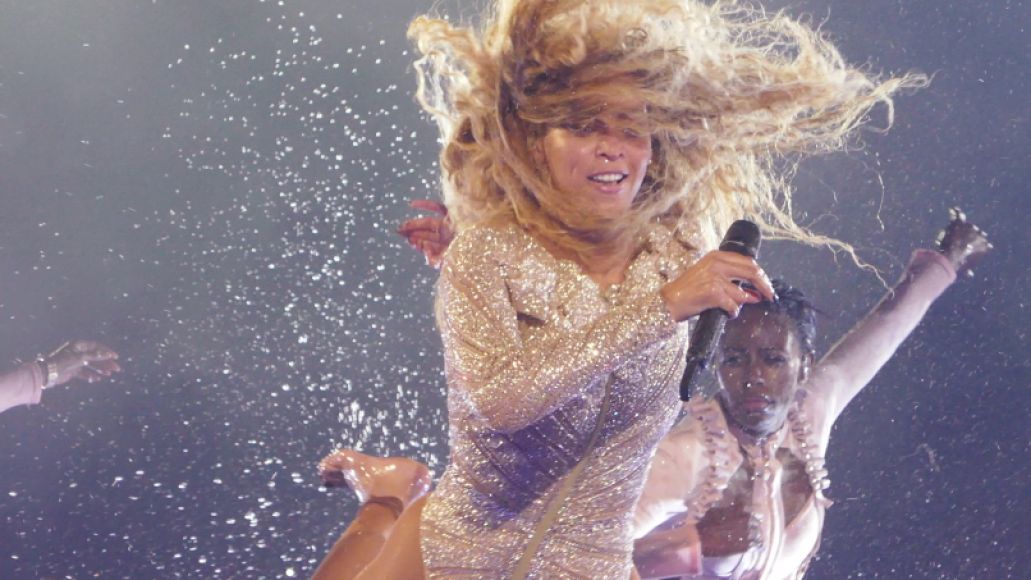 What I don’t believe is that Beyoncé hates men. She’s vocal about their faults, but seems steeped in the school of feminism geared toward total equality, not some inversion of the Little Rascals’ secret club. A tribute to her father, “Daddy Lessons”, the monolith – plus every real-life appearance she’s made recently where she clearly loves and cherishes her husband – indicates a push for unity as much as independence. In a huge way – particularly as she and her dancers splashed in a pool of water (the satellite stage was transformed into a shallow pool), smiling and laughing like children throughout “Freedom”, “Survivor”, and “End of Time” – she evoked the recapturing of a buoyant, carefree youthfulness that will rise to top off grief-pain-anger’s poisonous elixir if one recognizes its presence.

Bey’s boundless beam as she kicked water toward VIP fans, all outfitted with complimentary Formation World Tour ponchos, suggested that – on the other side of adversity – strength, love, and happiness are there for the taking, a sentiment best expressed by Jay Z’s grandmother, Hattie White, at that song’s end in a video clip from her 90th birthday: “I had my ups and downs, but I always found the inner strength to pull myself up. I was served lemons, but I made lemonade.” 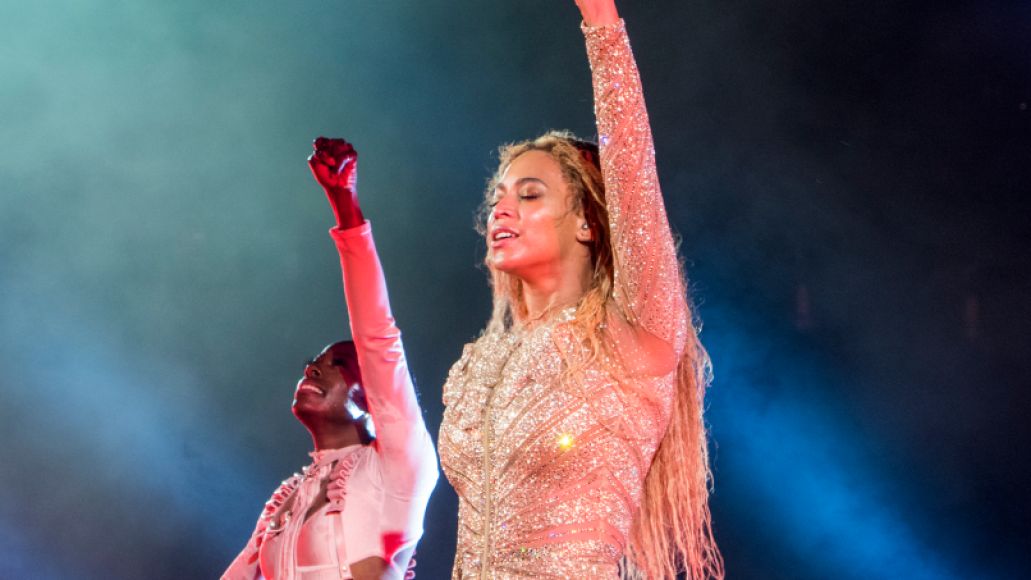 That model of positivity is 100 percent believable coming from a seemingly flawless cultural super-icon. But I also truly believe that she’d skin me alive if I ever crossed her or anyone she cares about (“Becky with the good hair,” if you’re real, I feel for you). In that regard, on top of so many other reasons, she’s as genuinely impressive as pop stars come. 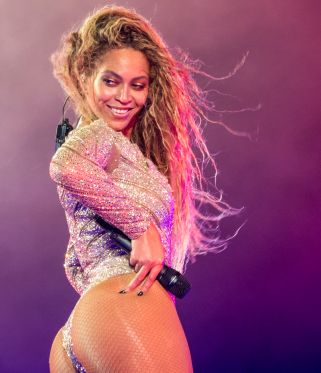 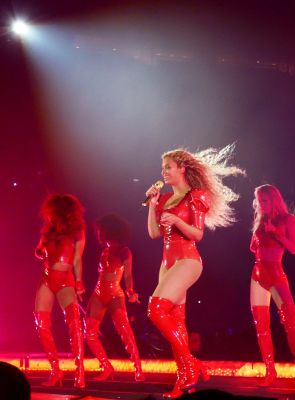 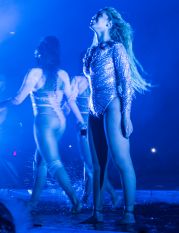 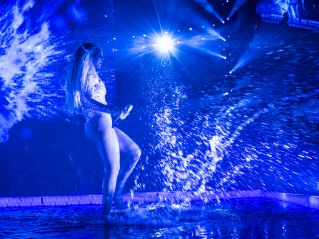 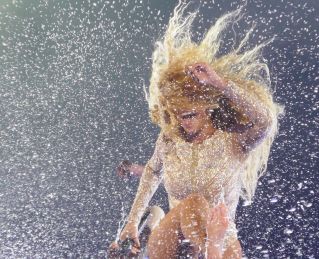 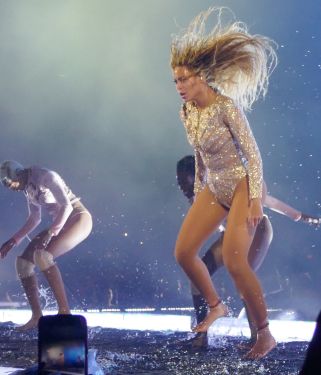 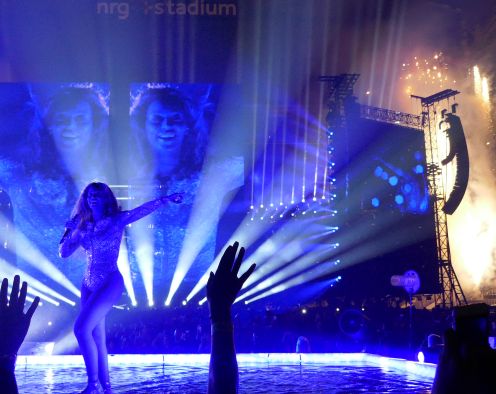