Moogfest: the event that never ceases to amaze.

“Event” being the important distinction. Part festival, part conference, part expo — Moogfest celebrates music, technology, counterculture, and always the future. It’s as hybridized as the music genres it highlights and the multidisciplinary creatives presiding over its programming.

Where else can cyborgs and futurists rub elbows with electronic music legends? Better still, where else can forward-thinking fans and creatives go to engage directly with some of the brightest minds on the planet? Moogfest is an experience designed to stimulate creativity. It’s uncommon for any event of this scale to have such altruistic intentions, but that’s the reality. That’s why luminaries like Laurie Anderson, Gary Numan, Martine Rothblatt, Mark Mothersbaugh, Janelle Monáe, Daniel Lanois, and many others left their mark on Moogfest this year — not to mention the legacy of remarkable talent that’s graced the event across its nine iterations. 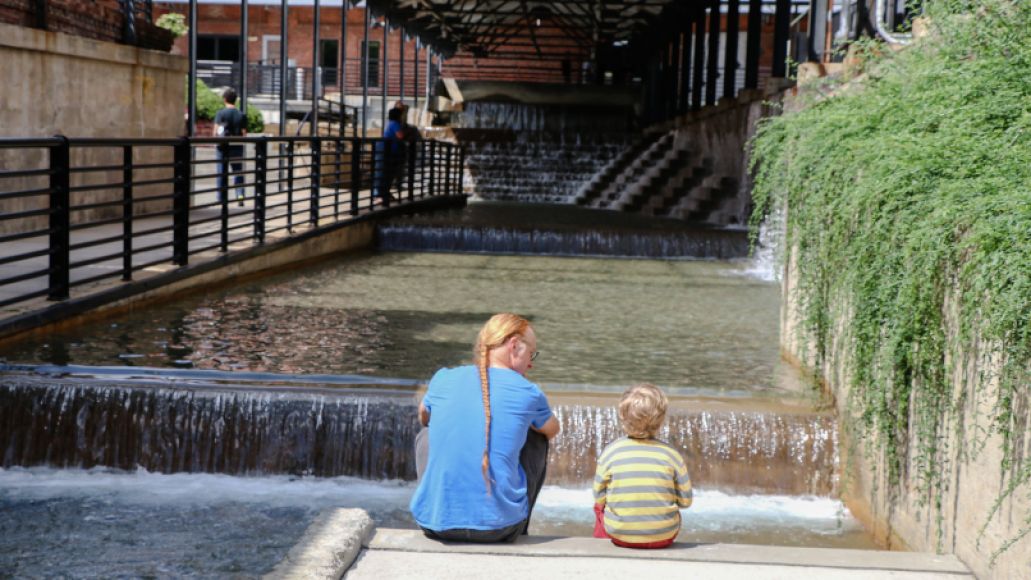 What further sets Moogfest apart are its cozy confines. Since 2010, Moogfest had shared its home with the Moog Factory in Asheville, North Carolina, where it cultivated a relaxed, familial environment of artists, presenters, and patrons co-mingling as they walked from venue to venue. This year, they’ve uprooted from the funky mountain town to Durham, home of Duke University and myriad tech startups. Miraculously, the scenery change didn’t cause any unwanted distortion. Durham welcomed the hybrid festival with open arms, and their wide variety of venue spaces, excellent food, and genuinely friendly people ensured that even with the move, returning to Moogfest still felt like coming home.

This year’s event comes at a critical time, with North Carolina’s discriminatory HB2 bathroom law restricting transgender persons from using the bathrooms of their chosen gender and many performers boycotting the state in protest. In response, Moogfest, along with the artists and local activist groups, co-opted the festival as a weekend-long protest of HB2, ensuring that all bathrooms at all venues were gender neutral, speaking out against the bill throughout the four-day event, and encouraging everyone to “Synthesize Love.” No artist declined to appear at Moogfest, and some of the biggest names lent their words to the creation of a powerful statement of defiance on the Moogfest website — a statement embodied in the event itself. 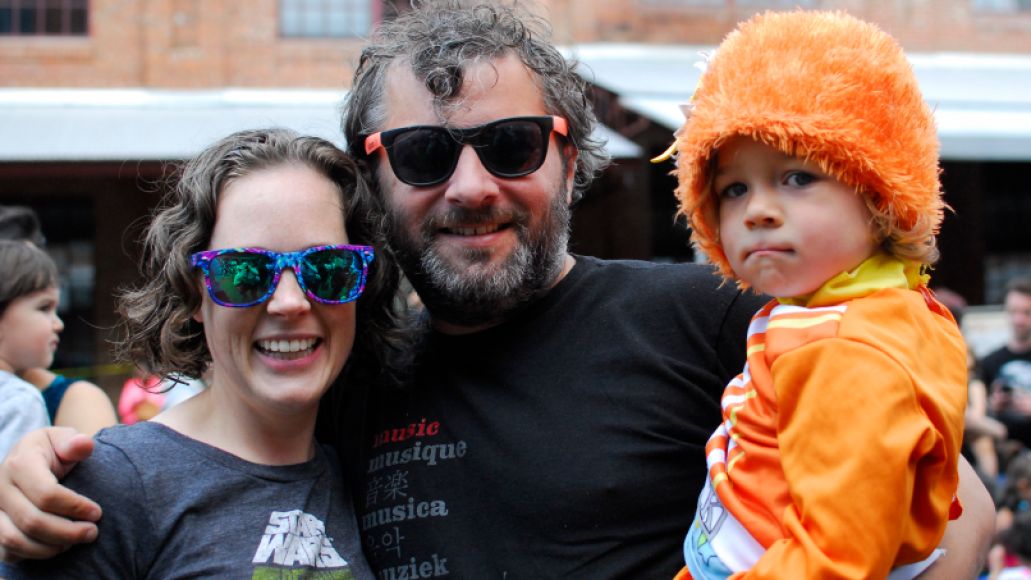 Future thought, future sound, afrofuturism, transhumanism … synthesis. Moogfest is the festival of the 21st century. It’s an idea too bold to work, and yet, against all odds, it thrives — celebrating humankind’s triumphs in innovation and looking headlong to the synth-scored horizon of where we’re headed. Here’s but a sampling of the amazing things we saw and experienced at Moogfest 2016: music performances, discussions, and all the eye-opening stuff in between. 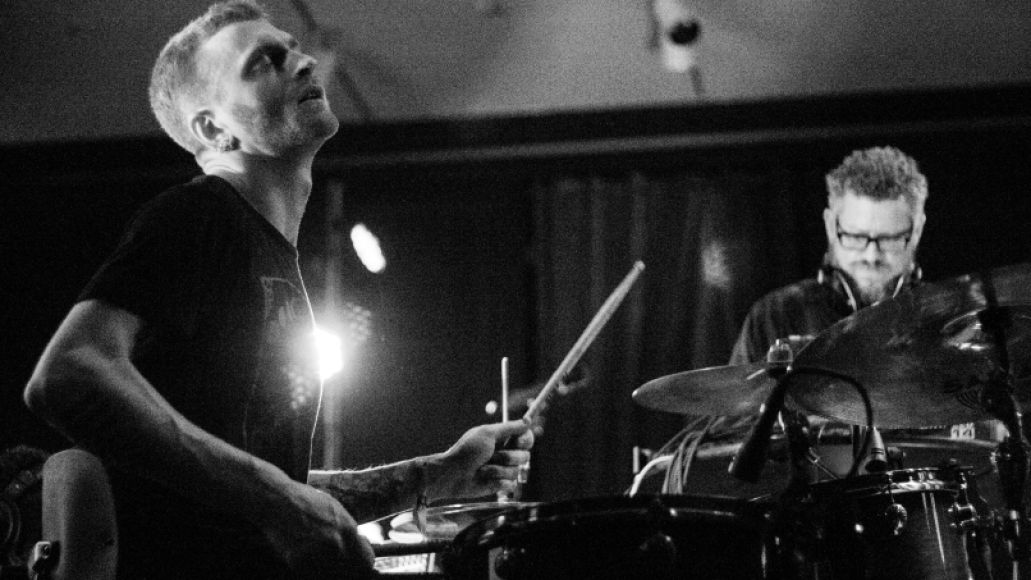 It takes a certain superhuman physicality to play drums for four hours straight. Then again, Greg Fox has proven himself to be unnaturally gifted in the art of percussion as the drummer of Liturgy. Backed by a group of free-form electronic soundscapists, Fox kept the groove going from 2-6 p.m. on Thursday at the Museum Hotel, where there was a different four-hour durational sound installation each day of Moogfest. His limbs looked like boneless rubber, and he didn’t appear to tire — physically or mentally — at any point in the performance. I even saw him later that night at another set, and he was totally awake, aware, and unfazed by the insane task he’d just accomplished. –Jon Hadusek
__________________________________________________________ 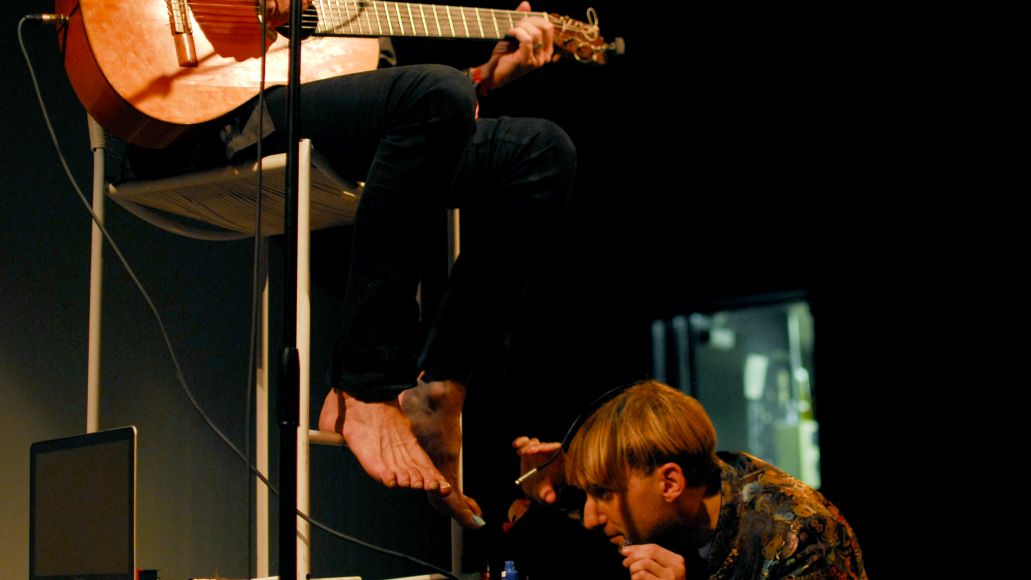 In a list of “only at Moogfest” moments, this has got to be at the top of the heap: a duet between an acoustic guitar player and the colors of this toenails, as read by a cyborg.

Neil Harbisson is the world’s first government-recognized cyborg. The Catalan artist was born without the ability to perceive color and took matters into his own hands by installing a device called an eyeborg. It extends like a quail feather over the top of his head and translates colors into tonal frequencies – from infrared to ultraviolet – which he hears via bone conduction. On the opening day of Moogfest, Harbisson teamed up with fellow Catalan multidisciplinary artist Pau Riba for a truly unique piece of musical performance art. After Riba wandered the audience barefoot, singing, and playing guitar, he took an elevated seat, and Harbisson proceeded to paint the 68-year-old man’s toes. Harbisson then scanned the colors he pained with his eyeborg so the audience could hear the tones. Riba improvised guitar and vocals as one beep layered atop another.

The colors, Harbission explained, were specifically chosen because his perception of colors is microtonal. As a result, he had to drive all over New York City and buy the right colors at great expense; otherwise, the performance would have been out of key. They went on to do another duet where Harbisson played hues of orange (f-sharp) underneath Riba’s best known song, “Porcelain Girl”. The two met over Riba’s manifesto, proposing that by virtue of our modern dependence on machines, we’re all cyborgs. While Harbisson has electronic implants, the rest of us augment ourselves with “explants” – cars, watches, and any other objects that exist outside our bodies. –Cap Blackard
__________________________________________________________

Claire Evans: The Future Is Unmanned 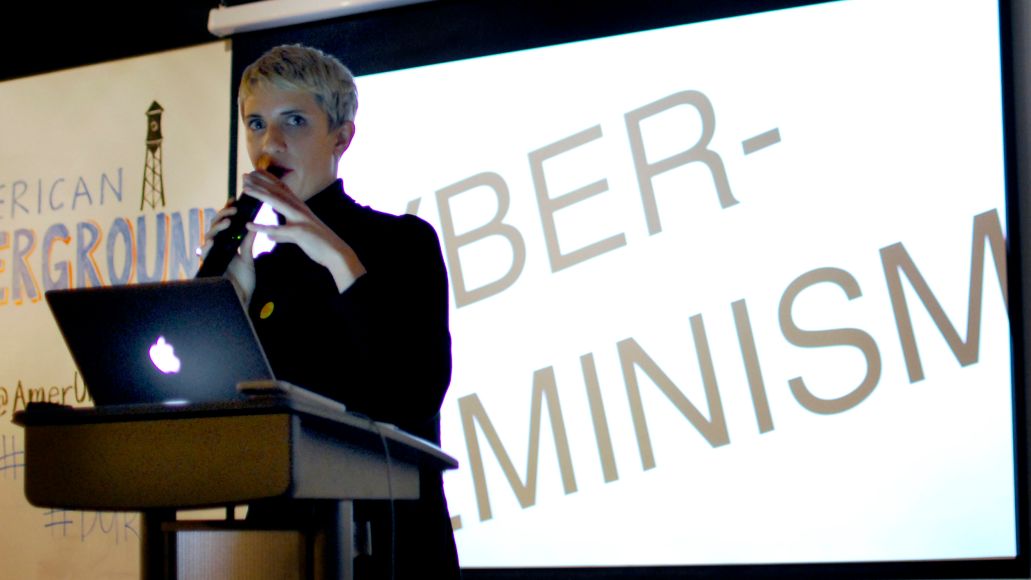 Claire Evans is the lead singer of YACHT, a major player in Vice‘s sci-tech branch, Motherboard, and a perpetual explorer of the new, the old, and exciting across all the mediums she chooses to inhabit. Her presentation, “The Future Is Unmanned”, set the pace on the opening day of Moogfest as she cast light on one of the most woefully undocumented facets of 20th century history: women’s founding roles in computer sciences and the Internet at large. From the time when “computer” was a job that saw rooms of women crunching complex equations to the digital renegades of the cyberfeminist movement of the ’90s, Evans’ overview was staggering in the wealth of untold history – all of it headed towards a forthcoming book, tentatively of the same title. The audience was treated to stories of computer pioneer Grace Hopper, who had to convince her male superiors that computer programming was even a thing, and the amazing gender-smashing antics of The VNS Matrix, from whom the lecture’s title was derived as well as the lecture/book’s rejected title: “We Are the Future Cunt”. Evans’ research into the feminist origins of the digital age are ongoing, but her goal is clear: “If women and girls can see themselves in the DNA of our planet’s most transformative and powerful technology, then I hope they can see themselves in its future.” –Cap Blackard
__________________________________________________________ 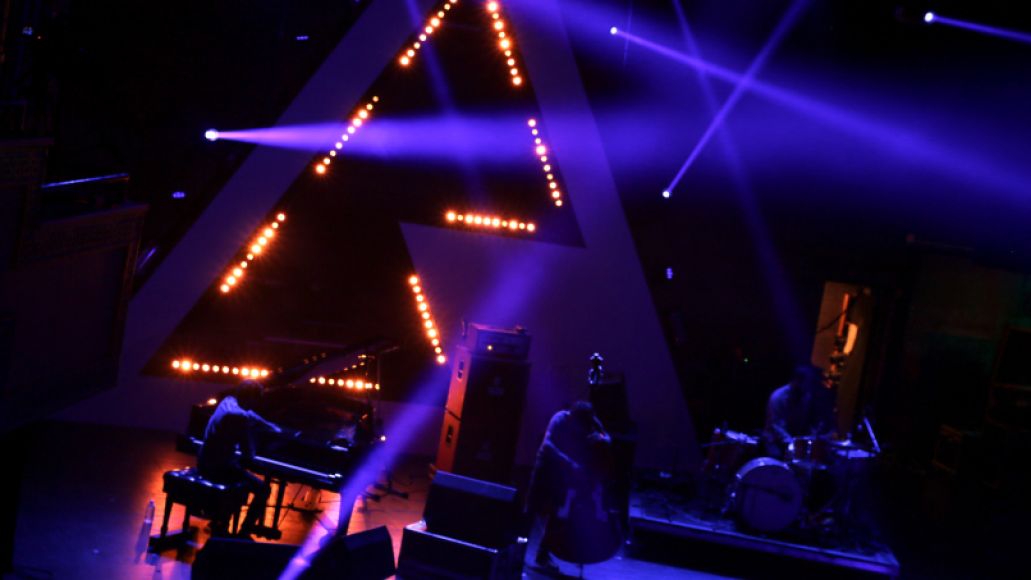 If you asked the people sitting on either side of you at the Carolina Theatre before Dawn of Midi began their set, chances are one of them knew the band was scheduled to open for Radiohead later this year and the other person had never heard of them before looking at the festival’s schedule. As seemed to be the case for both types of people, likely neither had listened to them before. The Brooklyn trio couldn’t care less.

Onstage, Dawn of Midi perform a meditative, experimental, ambient-like take on sparse jazz. Drawing on the subtlest influences from their respective countries: India for Aakaash Israni on double bass, Morocco for Amino Belyamani on piano, and Pakistan for Qasim Naqvi on drums. They worked through Dysnomia, their 2013 full-length, with expert focus, pulling on piano strings and burping out syncopated drumbeats with seamless transitions to new tempos. Calling it hypnotic is an understatement. As such, it felt like there could be no end, so the whole set ended somewhat comedically: with the venue itself pulling the plug to keep things on track — even though the band only had two minutes left of a 47-minute album they chose to perform in full. –Nina Corcoran
__________________________________________________________ 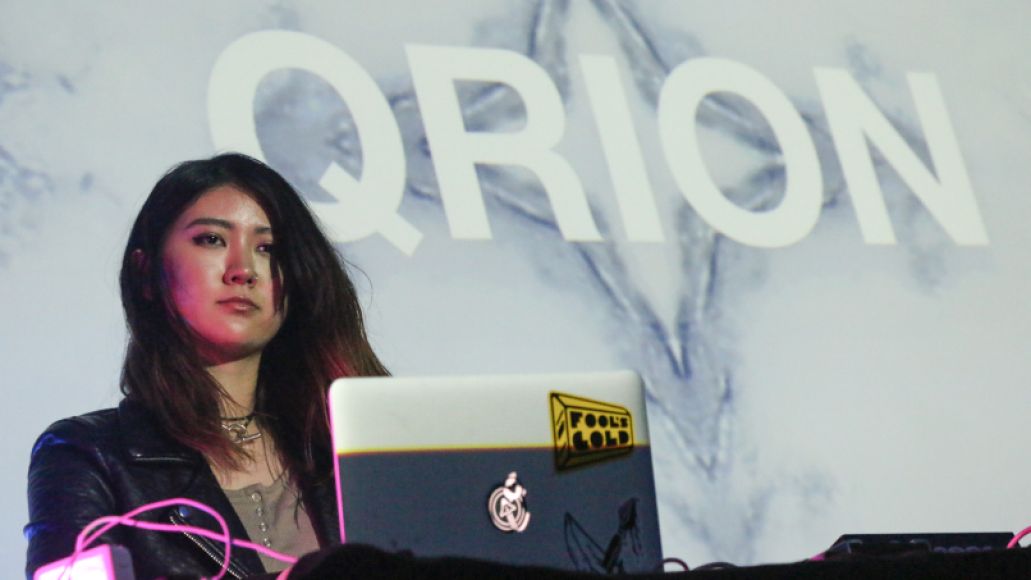 It’s fitting that Qrion hails from Sapporo, the capital of Japan’s northernmost island. It’s both tropical and chilly, snow dusting the city’s circumference in winter whereas its sandy beaches boast a different shade of white come the summer. Live, Qrion evokes attributes of both. Inside the expansive Armory, the 21-year-old worked through cuts off her own EPs, mixing them with the likes of Kendrick Lamar and deep house with sweet-turned-vicious delivery. There’s a tongue-in-cheek acceptance of her heritage that comes naturally when standing in front of a room of, for the most part, white boys. Qrion, who now lives in Los Angeles, projected a tweet in broken English on the screen behind her while pixelated sushi fell over it, burst purple heart emojis on rapidfire, and went so far as to flash the proper pronunciation of her stage name across the screen. If she could mock the way she’s perceived in America, then the crowd could mock themselves too, most of whom eventually followed suit, breaking out of their comfort zones to break into a full sweat come the end of her set. –Nina Corcoran
__________________________________________________________