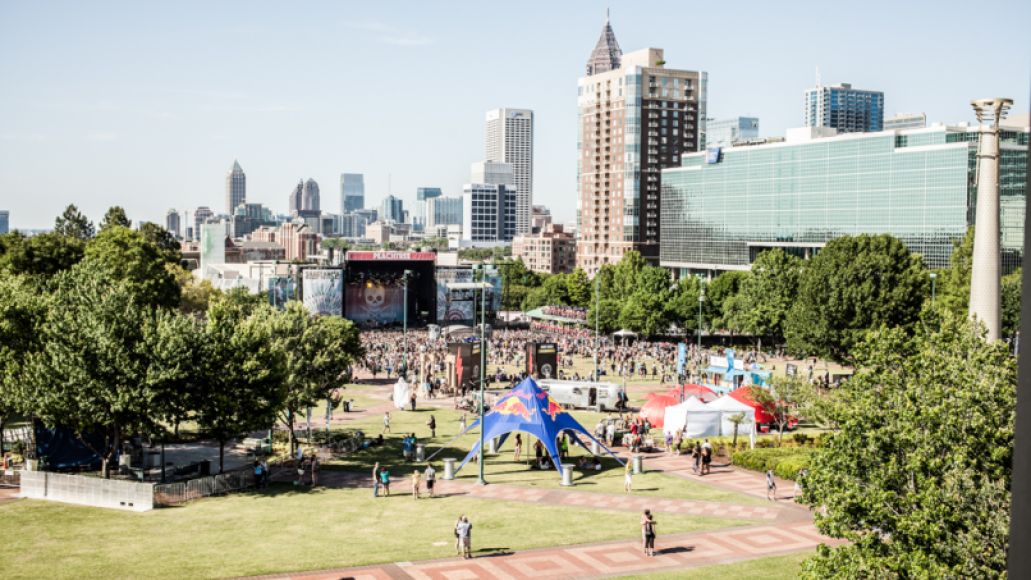 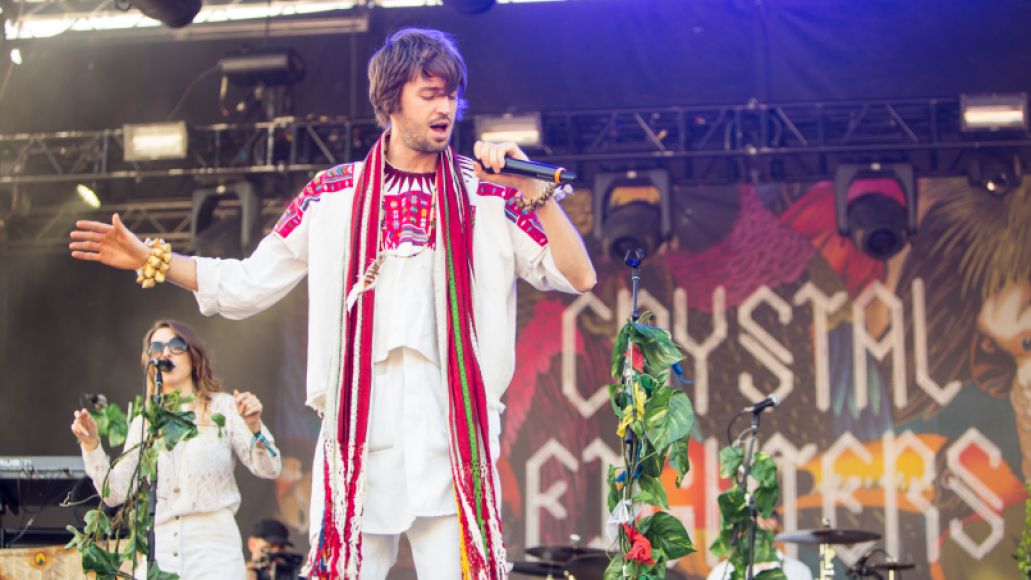 From their culturally confusing outfits to the parrots and vines that dominated their onstage imagery, it would be impossible for the uninitiated to discern not only where Crystal Fighters are from, but even what the hell they are going for with their act. The music doesn’t help, fusing African and Latin rhythms with ass-shaking EDM bass. Yes, the five-piece sells it. Their entire performance was built around selling it by any means possible. It’s music that’s designed for outdoor festivals (or dance collaborations, as their best-known song to date is a pairing with Feed Me), but it fails to hold up to any reasonable questioning about cultural appropriation or basic good taste. Plus, any band that makes a bigger deal about their spiritual home (Basque Country) than their actual home is a straight sell. –Philip Cosores 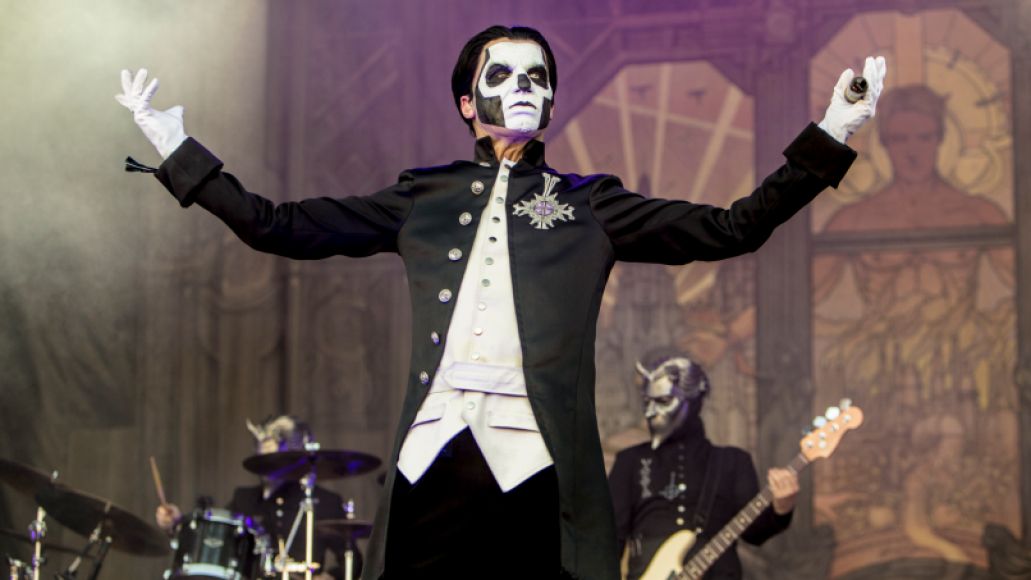 The Eyes Wide Shut of metal offer little more than their costumes and the mystery that surrounds them. Musically, Ghost is a bit of a slog, with the five-piece too obscured by their masks to really connect with the audience. Even frontman Papa Emeritus III (don’t ask), the only specter to don a painted face rather than a full-blown demon head, plays his set stoically and cold, living the role he has created. Yes, this is all intentional, but on Friday evening, in front of a crowd of The 1975 fans that patiently awaited their headliner, it didn’t really work for an audience unaware of the band’s mythology. The doomy mid-tempo tunes failed to endear the band leaving little more than a gimmick and some played-out religious iconography. –Philip Cosores 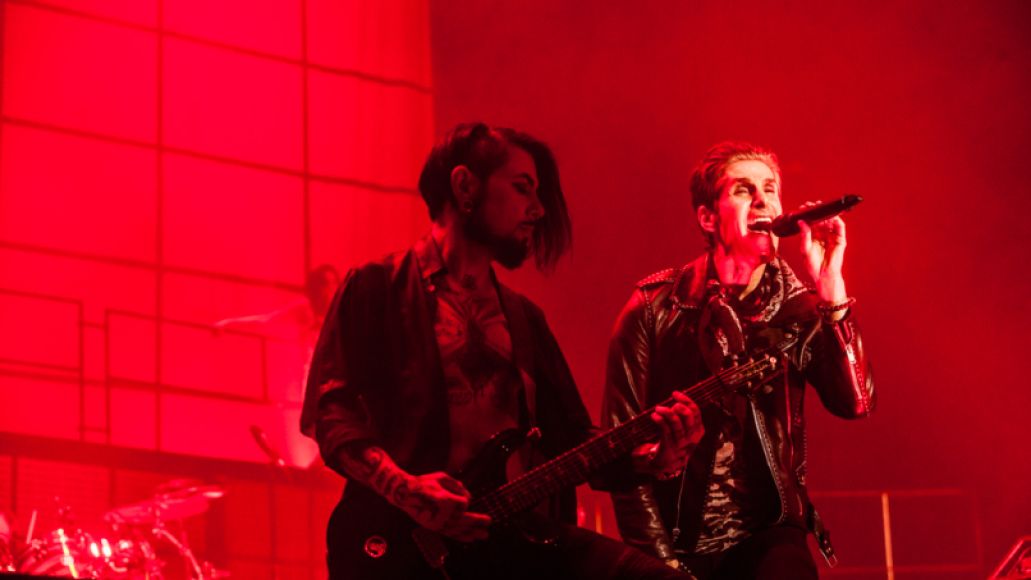 Jane’s Addiction will surely collect accolades after Friday’s Shaky Knees set for being so many decades in and still approaching their performances with vigor and excitement, and for good reason: a band that has accomplished so much in their career deserves a certain level of respect. That said, there were multiple puzzling aspects of the performance, not the least of which was Perry Farrell, who felt tired on the high notes and seemed heavily reliant on the shock factor of his backup dancers (which included his wife), who spent the set everywhere from grinding on the aging lead singer to, towards the end, swinging limply from cables.

Farrell didn’t seem to be in touch with the crowd at all, playing tough-guy about the “hard curfew” before the set was even near ending and promising concertgoers he would help them find “a happy whore to take home to mama.” The lighting and instrumentals were on-point, but maybe 2016 is not the time to revolve your show around using women as props, and maybe 27 minutes before your set is over is not the time to act tough about running over curfew. The set ended early, presumably expecting an encore, but the crowd filed right out. –Dacey Orr 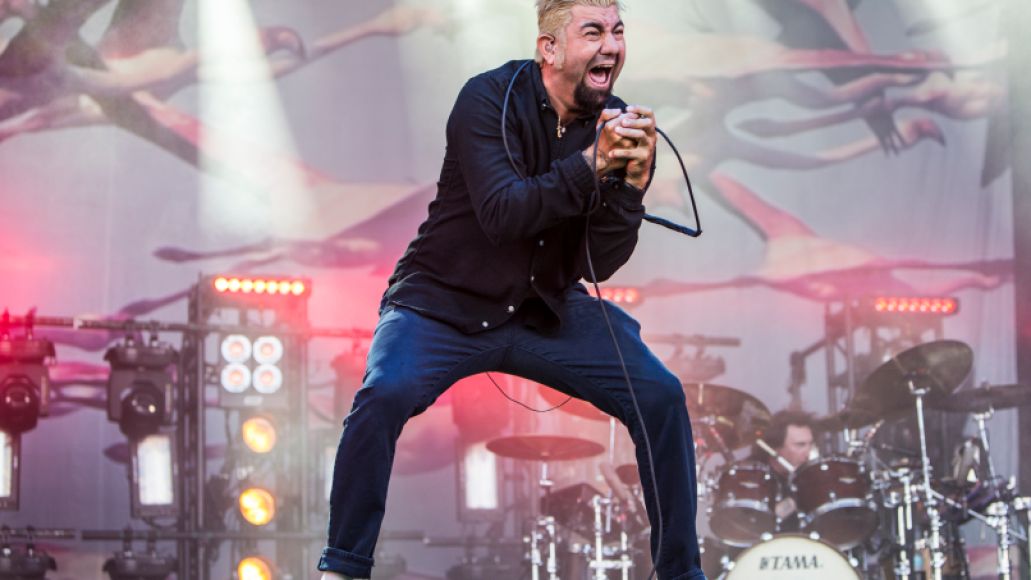 Riding high with a return to form album, Gore, the scene was set on Sunday evening for Deftones to demonstrate why they have transcended the nu-metal white pony they rode in on in the ’90s. And if it were just based on energy, with frontman Chino Moreno and bassist Sergio Vega boisterously flinging themselves across a fog-drenched stage, the set might have proved successful. The problem was that the band just didn’t sound good. A rager like “My Own Summer (Shove It)” doesn’t need much finesse, but many of the group’s other tunes do, with “Be Quiet and Drive (Far Away)” getting lost in the muddy sound and “Knife Prty” barely recognizable outside of guitarist Stephen Carpenter’s unmistakable lead in. Deftones are still an endearing band even when not sounding their bestl Moreno’s stage presence and dopey grin sell the aggressive tunes, despite the occasional unfortunate “yeah bitch” or “get it, girl” exclamation. For the casual observer, though, it wasn’t a performance to be won over by. –Philip Cosores 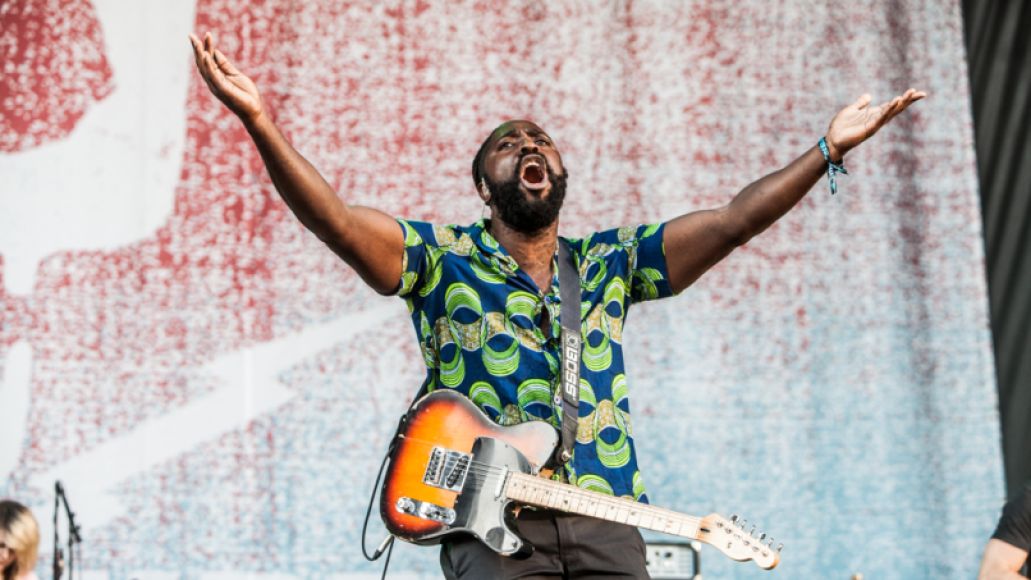 Bloc Party has a spread-out but large and devoted fan base, and throngs of them showed up for the English indie rockers’ sunset performance on night one. The band’s latest record, Hymns, was widely regarded as a return to form after dabbling in a more electronic sound, and while surely longtime fans found something in their Shaky Knees performance, the band’s hour-long set on the festival’s main stage felt a bit like a band going through the motions. But as they drew from the new record on songs like “Virtue” and peppered the setlist with standard numbers like “Banquet”, frontman Kele Okereke’s vocals were unwaveringly on-point, and his eyes gleamed with an intensity that made a strong case as to why this band continues to land big gigs. –Dacey Orr 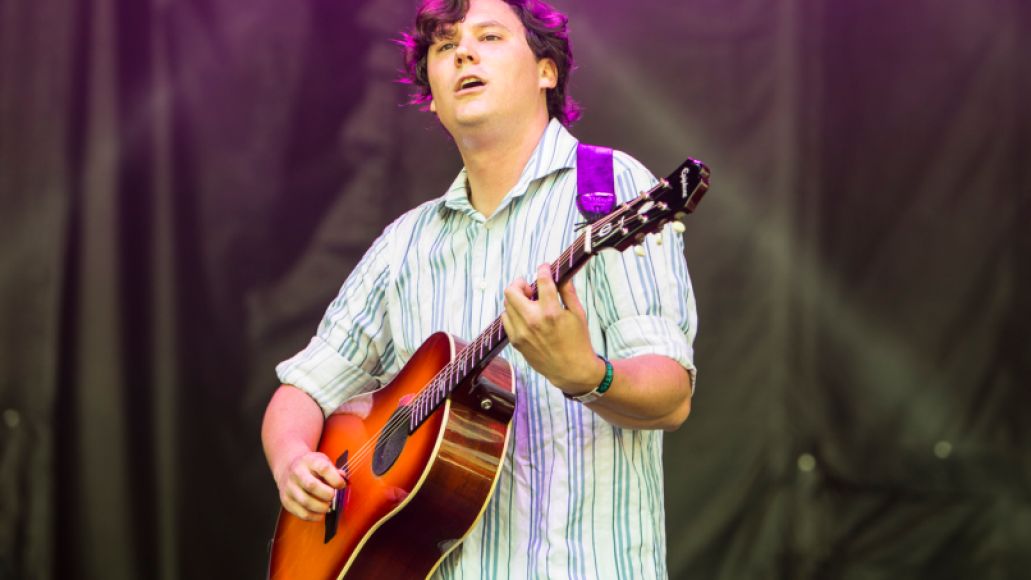 “The good thing about playing early is you still have the rest of the day to get fucked up,” announced The Front Bottoms’ leader Brian Sella, and the early afternoon sun also proved kind to sing-along songs. “Au Revoir (Adios)” and “The Beers” found sizable, enthusiastic responses, the audience finishing Sella’s lyrics on cue. Up against other 2016 rock bands, The Front Bottoms are often out of place with their hyper-lyrical, earnest-as-fuck songwriting. And even if their emphasized wordplay doesn’t amount to a whole lot, being out of fashion suits the band. It’s a calling card when a decade ago, they would have blended right into the wallpaper. —Philip Cosores 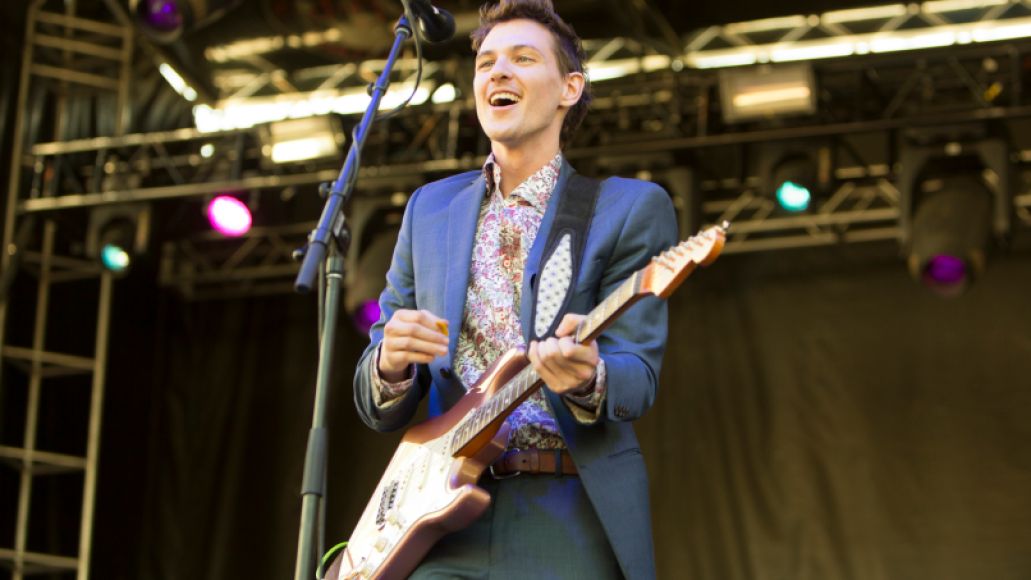 This was one of the first festival dates Houndmouth have played since losing founding member Katie Toupin, and longtime fans will certainly notice the absence of her voice as well as her role in the band’s playful onstage dynamic. That’s not to say Houndmouth’s set wasn’t a good one — Zak Appleby and Matt Myers have emerged as dual frontmen, and as they ran through tracks like “Black Gold” and “Honey Slider”, it was clear that their recent lineup change hasn’t particularly damaged them with the masses. Breakout single “Sedona” was a highlight, garnering many crazed screams and sing-alongs from the sizeable crowd, and the band closed out their set with humorous number “My Cousin Greg” — a song with as much personality as the wild suits they were wearing in the Georgia heat. –Dacey Orr 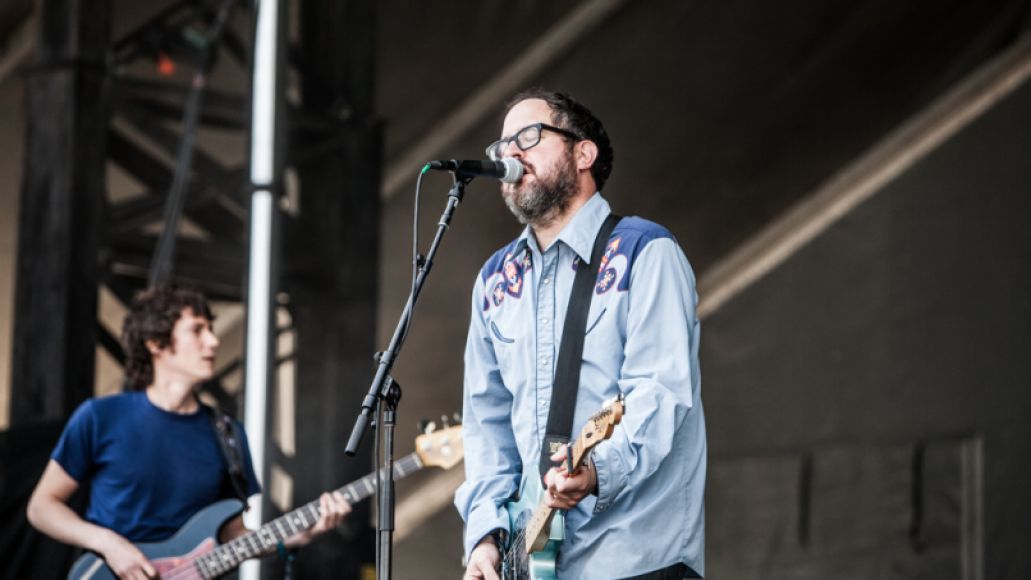 Delivering on the depth of songs like “No Future” and “Terrified Eyes” despite the contrastingly bright day, Craig Finn performed with a laid-back confidence befitting his veteran-indie-rocker status, letting the lyrics provide the intensity with scattered commentary in between. Fans of The Hold Steady should be prepared for something very different when taking in Finn solo, but not necessarily any less gripping: Finn’s wearied perspective and scaled-down tone and tempo make for an introspective listening experience that keeps you thinking throughout. Set closer “Trapper Avenue”, a number from Finn’s 2015 release, Faith in the Future, was a highlight, leaving listeners with what felt simultaneously like a warning, a blessing, and a goodbye bid. –Dacey Orr 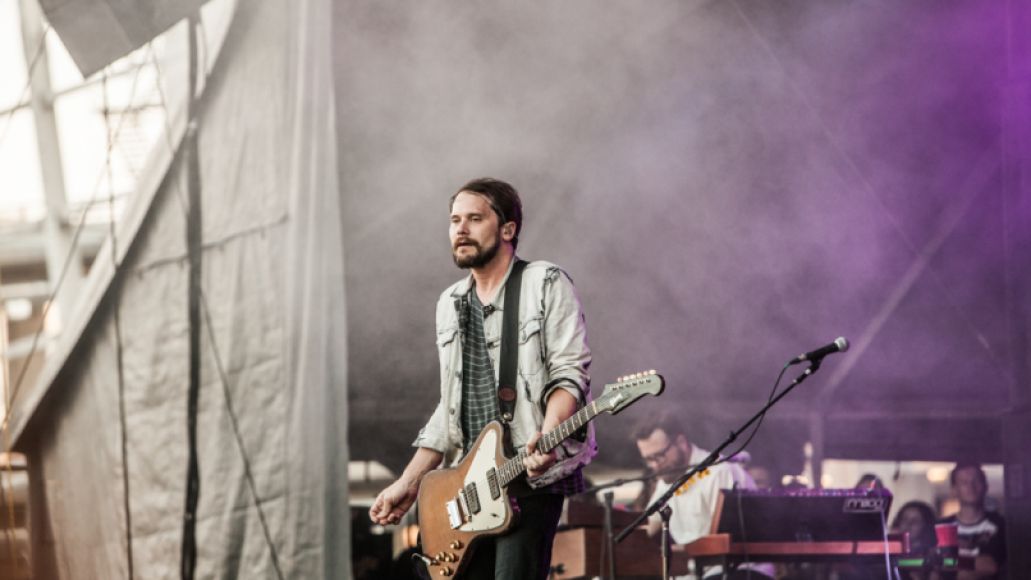 Silversun Pickups preceded current tour opener Foals on Saturday’s lineup, and the band’s renewed sense of energy (not to mention a shout-out or two) would lead you to believe the two acts are getting along swimmingly. Nikki Monninger and Brian Aubert were more lively onstage than they’ve been in recent years, and the set was better for it, breathing new life into older songs while making the newer material sound all the more inviting. Of course, the set closed out with “Lazy Eye”, enticing even those at the back to stand up and get moving before the stage switched over to powerhouse Foals. –Dacey Orr

The Head and the Heart 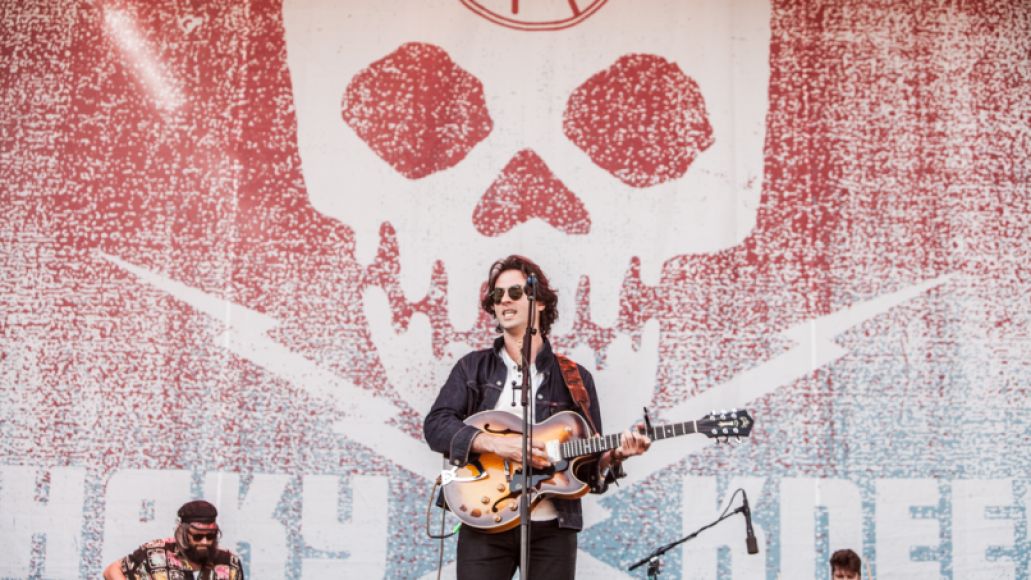 The Head and the Heart have their particular brand of harmony-driven indie folk down to a science, and seeing them execute is always a treat. You either enjoy that kind of accessible roots-pop sound or you don’t, but for a festival whose inaugural year featured The Lumineers as a headliner, this was an audience pegged to dig THatH from the start. The standout number was “Let’s Be Still”, the title track from their 2013 sophomore record, and the band’s chemistry with one another onstage made for a performance capable of not only delighting current fans, but winning new ones. –Dacey Orr