The massive success of Top Gun, released 30 years ago this week, spawned a new age of Hollywood filmmaking. While films like Jaws and Star Wars are credited with fueling the trend of releasing studio blockbusters while students were out of school, the association of heat with big-budget spectacle was cemented by Tony Scott and his team of superproducers, Jerry Bruckheimer and Don Simpson. Prior to working with Scott, the pair produced megahits like Beverly Hills Cop and Flashdance, but Top Gun was perhaps the fullest realization of their brand to date: empty summer movies that put product ahead of narrative.

In an essay for GQ, Mark Harris further argues that Top Gun killed the movies, calling it the first “high-concept blockbuster.” These are “films for which the trailer or even the tagline told the story instantly.” That’s because when it comes down to it, there’s very little story at all. Harris describes the nascent genre as “stitched-together amalgams of amphetamine action beats, star casting, music videos, and a diamond-hard laminate of technological adrenaline all designed to distract you from their lack of internal coherence, narrative credibility, or recognizable human qualities.” Scott would go on to helm Bruckheimer and Simpson productions like Beverly Hills Cop II and Days of Thunder, the latter also starring Tom Cruise, but it would be another of their protégés, Michael Bay, who perfected the form. 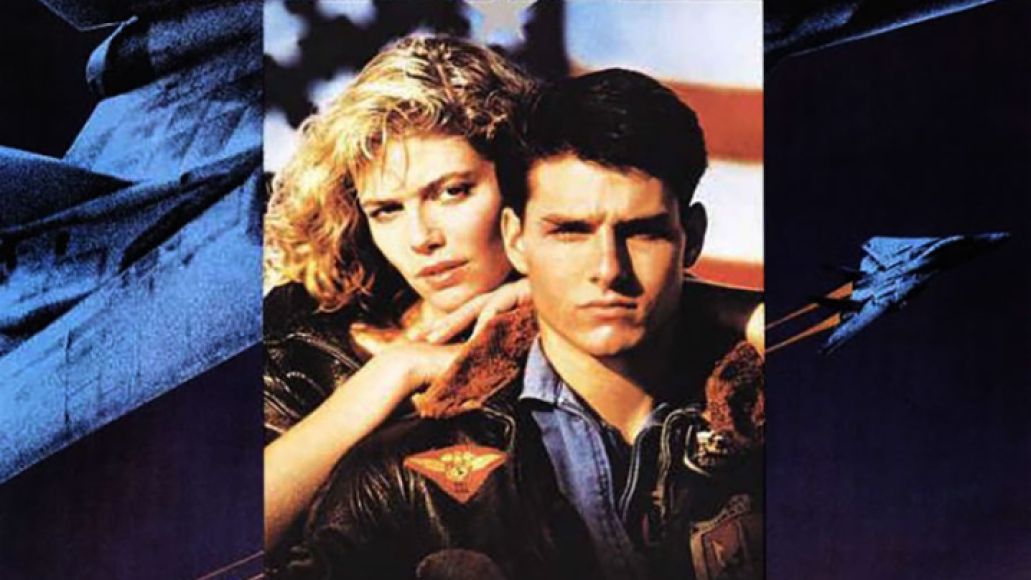 But if Top Gun was the beginning of one era, it also signaled the end of another one. Bay’s later Armageddon and Transformers films traffic in celebrations of male bonding that were explicitly heterosexual and often tinged with homophobia. In Bad Boys II, Will Smith and Martin Lawrence are approaching a residence they intend to investigate. Lawrence senses danger and wants to get something off his chest. “I need to express [something] right now,” he says. “I want you to know if this is our last job, I really appreciate you, okay? No, that’s not gay shit. This is man shit.” The 2003 film is basically one very long “no homo” joke.

Top Gun, however, emerged at a fleeting cultural moment in which the action movie could be both very straight — in that all of the characters ostensibly have sex with women — and incredibly gay. Remember that this was pre-Tarantino Hollywood, before Pulp Fiction popularized self-awareness and irony in mainstream filmmaking. Just six years prior to that film’s release, a studio tentpole like Top Gun could be both subtextually queer and yet completely oblivious of its explicit implications. If the film is a gay romance in which sodomy has been replaced with explosions, this fact appears lost on Scott, Bruckheimer, and Simpson.

In the decades since its release, Top Gun has often been called “the gayest movie ever made,” and it’s fitting that Quentin Tarantino himself outed it. In a memorable speech from the otherwise forgettable 1994 indie Sleep with Me, the director pops up at a party to put forward his theory that Top Gun is “a story about a man’s struggle with his own homosexuality.” His subtextual analysis posits that the Kelly McGillis character, Charlie, represents heterosexuality. He notes that after she and Maverick (Tom Cruise) have sex for the first time, Charlie is dressed in male clothing. “She’s got the cap on,” Tarantino says. “She’s got the aviator glasses, she’s wearing the same jacket that the Iceman wears.” His Air Force buddies, however, represent Maverick’s gay destiny, and the film ends in an embrace with his closest rival, Iceman (Val Kilmer).

That speech was originally written by Tarantino and screenwriter Roger Avary — with whom he penned Pulp Fiction — for a separate feature. While it’s compelling, the theory errs on one key aspect. The duo argue that Top Gun is “subversion on a mass level,” but Tony Scott didn’t set out to make Starship Troopers; much of its homoeroticism was happenstance. Charlie isn’t wearing a baseball cap in order to subvert gender norms. That scene was filmed during reshoots, and by that time, McGillis had signed up for another production, the afterlife romance Made in Heaven, co-starring Timothy Hutton. In that film, her golden locks were dyed brown. To mask the incongruity, McGillis’ hair had to be covered up. 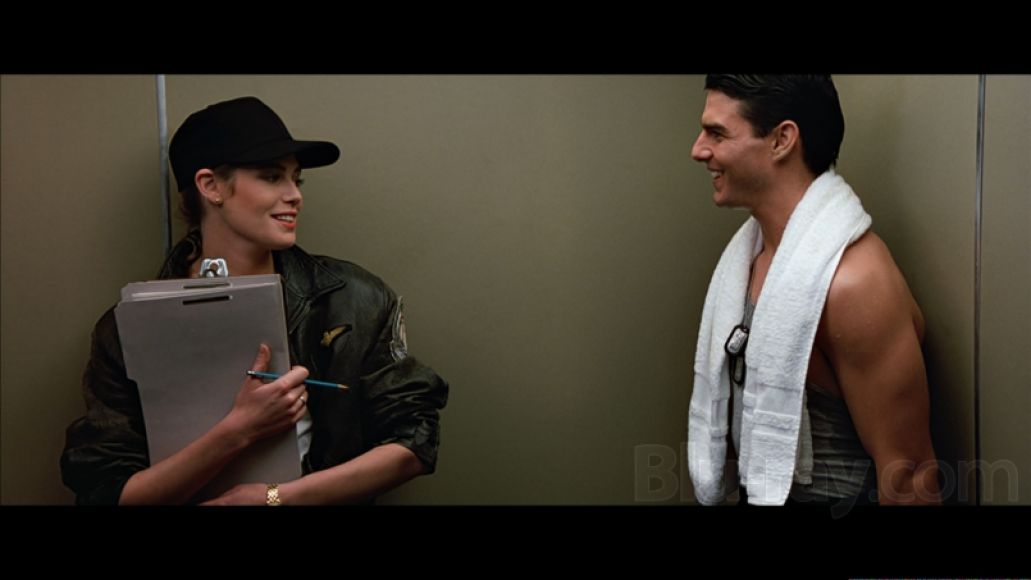 Top Gun’s most famous moment is a volleyball game in which Maverick, Iceman, and Goose (Anthony Edwards) play the sport shirtless; the match is a leather harness away from being a Tom of Finland spread. The scene opens with a shot of Iceman’s tanned, glistening back as he coolly spins a volleyball on his finger. However, Scott and his director of photography, Jeffrey L. Kimball (True Romance), save the most luxurious close-ups for Cruise, wearing only a skin-tight pair of jeans and his trademark aviators. Throughout the match, Maverick and Goose share three different high-five low-fives, which are perilously close to being outright butt-slapping. The cherry on this soft-core sundae is that the sequence is set to Kenny Loggins’ “Playing with the Boys”. Lyrics include: “Bodies working overtime/ Man against man.”

But if the scene appears to regard its male characters as sexual objects, that’s because Scott treats all of his subjects that way. In an interview for Top Gun’s 30th anniversary DVD release, the director explains he struggled with how to approach the scene before deciding to “shoot the shit out of it.” He continues, “I got the guys to get all their gear off and their pants and sprayed them in baby oil.” As The Wrap’s Meriah Doty notes, the scene takes its visual cues from the homoerotic imagery of photographer Bruce Weber, but what’s notable about Weber is that while Weber’s work has a gay sensibility, the artist does not. He’s straight.

There’s no mistaking the fact that Top Gun is intensely homoerotic. Although Maverick and Iceman are supposed to be enemies, their repeated jabs at each other are less aggressive than extremely flirty. Even the screenplay, written by Jim Cash and Jack Epps Jr., seems to hint that there’s an unspoken element to their rivalry. Here’s how Cash and Epps Jr. set the scene in the film’s final moments, when the men put aside their differences for a long, intimate hug: “They stare at each other for a moment, eye to eye even as they are buffeted by the crowd. Finally, Ice breaks … a grin.” This description would be more fitting in a romantic comedy than an action film, and an infamous exchange between the two pilots drives that point home. “You can be my wingman anytime,” Iceman smirks. “Bullshit, you can be mine!” Maverick responds.

There are numerous such howlers throughout the film — particularly Top Gun’s obsession with butts — but what’s notable about Scott’s film is that if it fetishizes its characters, it’s not for an audience of gay men. The project was developed by the Navy as a recruitment tool. A decade after Vietnam ended with a whimper, Top Gun was an intended antidote to movies like Oliver Stone’s Platoon, which won Best Picture the same year Maverick conquered the box office. If Platoon argued that war is hell, the combat in Top Gun is almost heavenly. The film’s jingoistic revisionism is right on the label: Maverick’s father was shot down in Vietnam, and the young pilot is recklessly driven to avenge him.

If Top Gun shows its warriors to be handsome, virile, and fearlessly determined to defeat the Russian enemy, critic Mark Simpson called its depiction of manhood “aspirational heterosexuality.” In the 1980s, this was defined by the emergence of the bodybuilder physique, embodied by figures like Arnold Schwarzenegger, Sylvester Stallone, and Dolph Lundgren. But what’s notable about Schwarzenegger and Stallone is that their male form is rarely sexualized for the purpose of the female gaze. Films like Predator, Commando, Over the Top, and Tango and Cash might as well be entirely devoid of women.

When it comes to the period’s treatment of male homosociality, Top Gun was the rule, not the exception. Predator features what might be the most excessively long handshake in cinematic history, in which the bulging biceps of Schwarzenegger and Carl Weathers nearly burst. There’s a moment in Tango and Cash that’s so overtly sexual it’s almost remarkable. Detectives Raymond Tango (Sylvester Stallone) and Gabriel Cash (Kurt Russell) are arrested and thrown in prison, where they are forced to shower together. Cash drops the soap and bends down to pick it up. Tango yells, “What are you doing?” After generously appraising his partner’s package, Tango responds: “Don’t flatter yourself, pee wee.” The problem here isn’t the suggestion that Cash is gay, but that Tango doesn’t measure up.

While later films would play incidents like these as opportunities to mock the perception that the characters might be gay, there’s simply no need in a movie like Tango and Cash. That isn’t even considered a possibility. Without that need to qualify their sexualities, they are allowed to gaze upon each others’ bodies — and even enjoy them. Even in the 1991 buddy cop film Showdown in Little Tokyo, Johnny (Brandon Lee) and Chris (Dolph Lundgren) are about to take on a squadron of baddies in a moment that perfectly mirrors Bad Boys II. Before they risk their lives, however, Johnny has a confession: “Kenner, just in case we get killed, I wanted to tell you: You have the biggest dick I’ve ever seen on a man.” 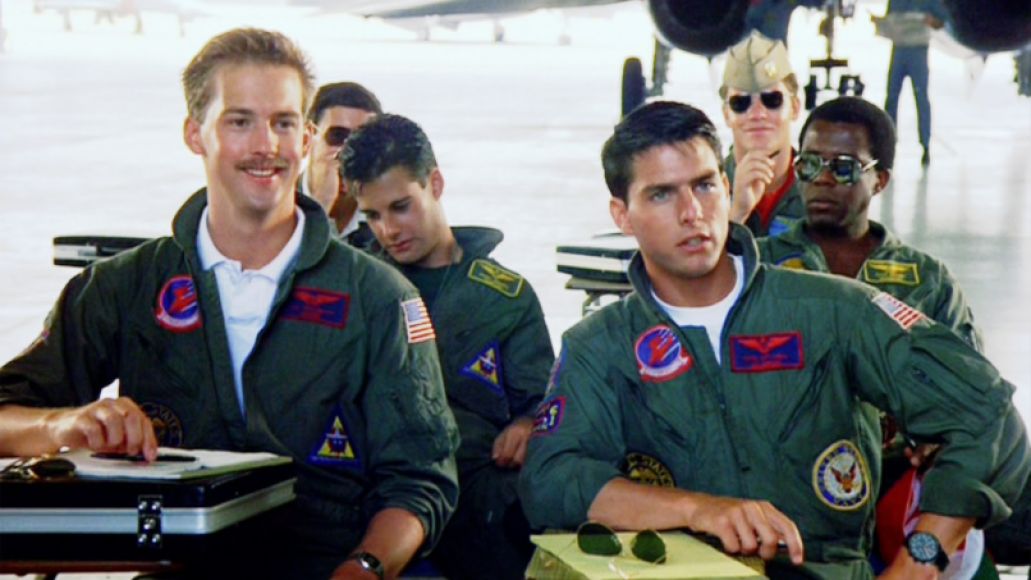 If these were soft-core movies made by straight men, about straight men, and for straight men, it would be incredibly difficult to replicate their success today. Top Gun was one of the last vestiges of masculinity’s age of innocence, where a movie like Rocky III could feature a sequence of Sylvester Stallone and Carl Weathers splashing around in the water and hugging after a strenuous training montage. These movies weren’t progressive, just incredibly obtuse. But three decades after Tony Scott invented the mindless action blockbuster, it appears there may be a virtue in ignorance after all.

Top Gun and the End of the Homoerotic Action Movie