This feature originally ran in February 2016 and has been re-published for tomorrow’s Adult Swim special, Brett Gelman’s Dinner in America.

“We like really dumb jokes, and we like laughs out of shock,” explains Woliner, speaking from Sundance Film Festival the day before Dinner with Family is scheduled to show as part of the festival’s iconic Midnight section. “To us, that’s both sides of what gets us excited.”

Gelman and Woliner originally planned for their follow-up to Dinner with Friends to focus on sex. They even went so far as to write a script, at which point Adult Swim producer Mike Lazzo told the two that he simply couldn’t air the special as they’d conceived it.

Television has long had a bigger problem with sex than with violence, a fact that wasn’t lost on Gelman and Woliner. But they needed a new way forward, so they turned their attention to a topic everybody can relate to: family. With the money and resources for a new special already in hand, they hunkered down and conceived of an idea where Gelman brings his parents to a private theater to celebrate their anniversary. Once they’ve settled in for a multi-course dinner, he subjects them to a play in which he reenacts the various atrocities they’ve committed to their son and each other.

“We always have family on the brain,” says Gelman. “We’re Jews. You’ve always got your parents in your head, at every moment of the day. The trick is creating a very hyperbolic, extreme version of a small emotional kernel that’s already inside of us.”

To create this extreme version of his past, Gelman recruited renowned stage and screen stars Patti Lupone and Tony Roberts to play the roles of his parents in the play. He claims that he wasn’t at all confident that either actor would agree to take part in the special. After all, potential cast members don’t always react positively when they’re sent a Dinner with Brett Gelman script.

Woliner says that what finally convinces people to take part is having them watch the previous special. “When they watch the first one, they get the tone, and they get that the stuff that reads as very horrifying on the page is actually weirdly kind of funny,” he explains. “The ones who get it are the only ones we want to be working with anyways.”

Some examples of what might be construed as “horrifying”: LuPone and Roberts pretending to shoot heroin while Roberts threatens to kill Gelman’s dog, accusations of incest and physical abuse, and a plot concerning patricide. Adding another level of discomfort to the proceedings are the reaction shots of Gelman’s parents, who sit horrified as a nightmarish version of their past plays out before them on stage. 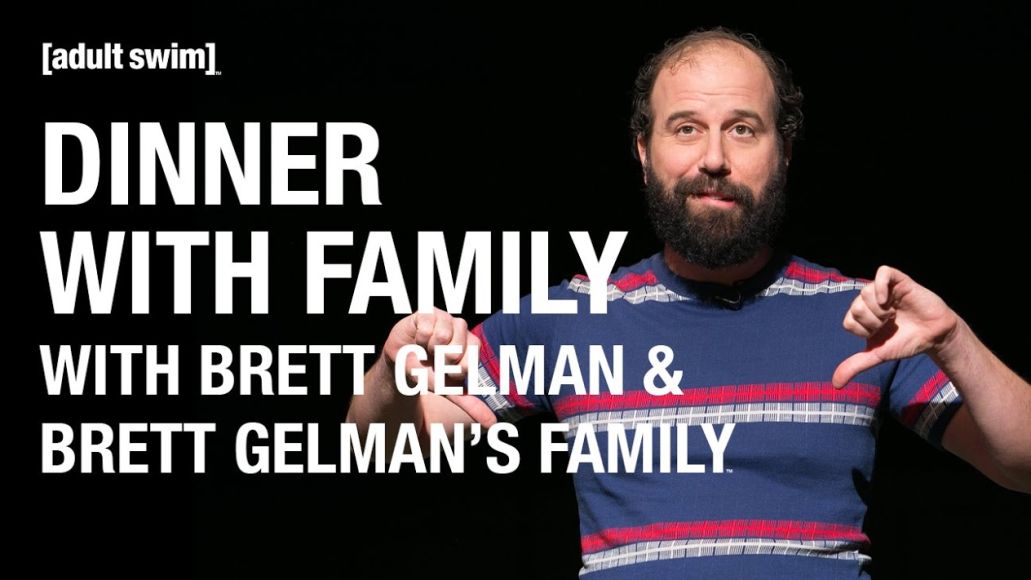 Asked whether an actor of Roberts’ repute had any resistance to a line like, say, “The moment your mother hammers this junk into my hungry vein, I’m going to hammer this hammer into this puppy’s ugly skull,” Gelman insists that the entire cast bought in without hesitation. “All of the actors are incredibly brilliant artists,” he says, “So I think that the trepidation is more that we know what we’re doing and that we know how to handle our own material rather than the material being offensive. Nothing is really improvised, so we really do stress that nothing is going to happen that is not in the script.”

The script in question manages to strike a startling balance between outright laughs and morbidly unfunny truths. Some of Gelman’s monologues in the play of his life are an outright parody of Billy Crystal’s one-man show, 700 Sundays — mockingly sincere and earnest moments made all the more outlandish by Gelman reciting them dressed as the 7-year-old version of himself. For the grim drama that punctuates the family’s past, Gelman and Woliner turned to films like Ingmar Bergman’s Autumn Sonata and Woody Allen’s Interiors for inspiration.

Gelman also cites the dramatic work of playwrights like Edward Albee, Arthur Miller, and Sam Shepard in helping him to shape the emotional narrative. “Not to compare [Jason and myself] to those writers, but we wanted to convey the boiling over of a family that has a pretty luscious exterior but a deep, dark interior.”

Given Gelman’s rich comedic roots, from his time at Upright Citizens Brigade in Los Angeles to his work on shows like Eagleheart and Comedy Bang Bang, he took a calculated risk in focusing more on characters than outright humor. Both he and Woliner recall going to great lengths to ensure they weren’t afraid of not being funny. The third installment in the series, entitled Brett Gelman’s Dinner In America and due out later this year, will take this exercise even further by focusing on race; both men stress that it’s their most serious special yet.

“Our next special makes the first two look like Paul Blart: Mall Cop in terms of darkness,” jokes Gelman.

Such a proclamation should not be taken lightly. Gelman and Woliner confess they were surprised to ever get the first special off the ground. It’s a victory — not just for them, but for comedy and independent short film in general — that Dinner with Brett Gelman is being screened at an event like Sundance.

“It’s great that there isn’t that stigma anymore and that the lines are kind of blurring,” says Woliner.

One stigma that appears to be holding fast? The duo’s hesitation to show Dinner with Family with Brett Gelman and Brett Gelman’s Family to their parents.

“No, my mother has not seen the special yet,” confirms Gelman, “But I am allowing her to see it. I guess I have to send her a link.”

“My parents texted me yesterday,” adds Woliner, “and asked that I mention in interviews that it’s not based on them.”

Brett Gelman and Jason Woliner: A Dinner with No Reservations