It started with a car crash. Well, first it had to start with a meeting about the car crash. Andy Hull and his bandmates in Manchester Orchestra were looking for someone to execute the video concept for their song “Simple Math”, which is how they ended up in a Brooklyn bar with Daniel Kwan and Daniel Scheinert, the directing duo better known simply as The Daniels. “I told the label that we wanted to work with them,” Hull recalls, attributing it to “a gut feeling that they were gonna do something really cool.” The resulting video revolves around a car crash that’s so much more than a car crash; it’s a poignant visual metaphor brought to life by the duo’s penchant for surreal filmmaking techniques and surprising practical effects.

A few years later, Manchester Orchestra reached out to see if The Daniels might be interested in doing another video, this one for Cope lead single “Every Stone”. “They wrote this really awesome treatment about this old guy breaking out of an old folks home while streaking,” Hull remembers. Unfortunately, The Daniels couldn’t find the time to bring that treatment to life. The duo had just been accepted into the Sundance Labs and were busy developing a script about “this guy and this dead body.”

That script would end up becoming The Daniels’ first feature film, Swiss Army Man. Starring Paul Dano and Daniel Radcliffe, the film’s plot revolves around a castaway (Dano) who befriends a bloated corpse (Radcliffe) and uses his body and bodily functions to help him survive on the deserted island. It’s a far cry from the surreal poetry of “Simple Math”, which is why Hull was surprised when, in January of last year, The Daniels sent him an email asking if he’d be interested in scoring the movie.

And now here we are, talking about the finished product in the makeshift living room of Manchester Orchestra’s home studio. Both Hull and Robert McDowell, the band’s guitarist and Hull’s fellow composer, seem humble when discussing their newfound status as film composers. “Andy and I have been doing this thing since I was 14 and he was 16, so we’ve developed an unspoken language,” McDowell says. It’s fitting that two best friends would end up composing the music for a movie that, beneath all its strangeness, is about the unbreakable bond that comes with true friendship.

The process was not without limitations. “When [The Daniels] came back and were like, ‘Cool, don’t use any instruments,’ all of a sudden our go-to things that we would start with and then build from were taken away,” McDowell explains. “We had to relearn how to work together.” Hull adds: “It would get frustrating, because you just wouldn’t know what the other person was thinking. A lot of these songs don’t have tempo, they don’t have a real structure, they’re just these movements that kind of keep growing on each other.”

Without the use of instruments, they chose a different approach. “Robert was sitting at the computer while I sat behind him with a microphone,” Hull recalls. “We learned to talk through it, and still towards the end it was really difficult.” Despite the additional recording stress, both composers admit to learning a great deal. “I really learned how to allow myself to be vulnerable to make some really strange sounds,” admits Hull, “and to go outside my comfort zone of sounding cool or emotional. We had to send The Daniels our progress, and they would just tell us, ‘It’s amazing, but it’s just too beautiful. You’ve got to make it a little weirder or a little uglier or a little more drunk.’” 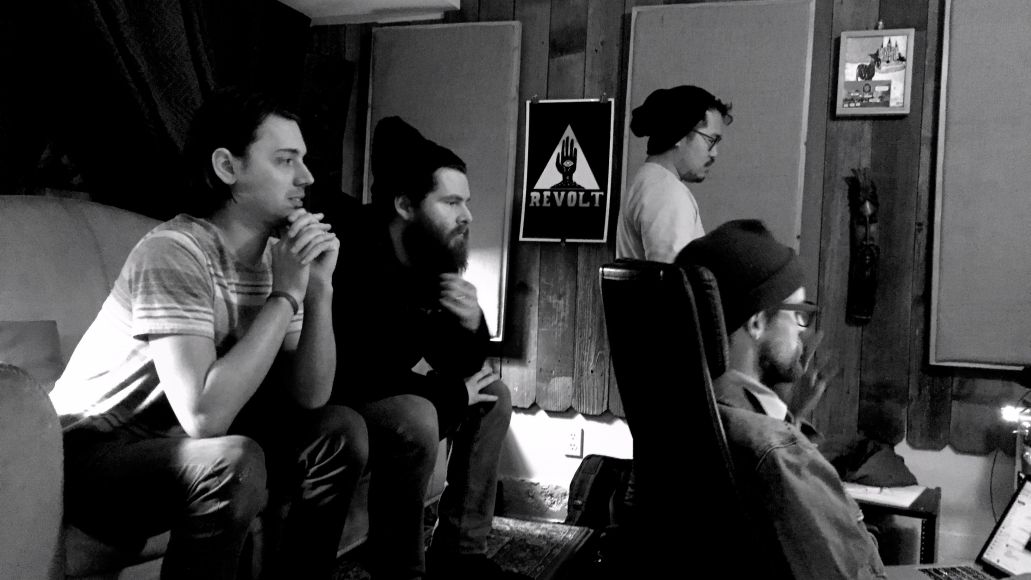 The result is some of the most meditative work that Hull and McDowell have released to date, and this isn’t a coincidence: The score takes place entirely inside the head of Paul Dano’s character. To reach this level of subjectivity, the band had to do some serious experimentation. “We were actually beating our heads against the wall because we couldn’t figure out what The Daniels wanted, so we started making these things we called ‘ghost ships,’ which we thought was just what it sounded like,” Hull recalls. “It was a very hollow-sounding meditative sort of thing, and it would move super slow … almost like syrup. We banged out three or four of those in like two hours,” he says before McDowell interjects, “Almost like a joke!”

Manchester Orchestra dabbled in a quieter realm in 2014, when they released Cope and an acoustic rendition of the same songs called Hope. “Hope showed another side of us,” says McDowell. When asked if they were striving for a similar idea of beauty on the Swiss Army Man score, he explains the key difference. “There are songs, like ‘Montage’ and ‘Cotton Eyed Joe’, where it’s just big. And then there’s like 20% that’s supposed to be very moving, like the whole fourth reel. And when we got to that, that was intentionally beautiful.”

On the especially moving “River Rocket”, Hull sings, “Everything everywhere matters to everything” to underscore a moment of revelation for the film’s protagonists. Initially these words seem to counter the overarching theme of Manchester Orchestra’s second album, 2009’s Mean Everything to Nothing. When asked about whether this was a result of personal growth or if they were simply motivated by the story, Hull explains, “I think we connected with the character Manny [played by Radcliffe], this gentle dead guy who is really naive and sweet trying to explain how Hank [Dano] mustn’t forget that everything matters. That is something I believe, and I believed that statement back in the day with those records. With phrases like that, what I meant was to never mean everything to one particular thing. Don’t have all of your meaning wrapped up in one thing … mean everything to no thing.”

In a recent Facebook post, Hull explained that immediately after reading the script, he wrote, recorded, and sent a song to The Daniels as an idea from which he and McDowell could develop the score. The song is called “A Better Way”, and an edited version plays over the film’s credits. In fact, Hull says, “That song became the basis for the melody of the entire movie.”

In order to really unify the score with the film, Manchester Orchestra had to get into the studio with Dano and Radcliffe. “The whole process was awesome,” Hull says. “Both those dudes were superkind and really professional. They were really interested in getting feedback and advice on how to sing and what to do, and neither were divas at all. They treated it like they were acting and they wanted us to direct them.”

But the actors weren’t the only people to lend their talents to the score. “There’s a scene called ‘History of the Universe’ where Hank is explaining mankind to Manny the way a kid who grew up in the ‘90s would explain it,” Hull says. We used the Jurassic Park theme and got clearance from John Williams himself.” McDowell comes in to clarify: “Well, it could’ve been an assistant, but the version we tell is that he put it on and was like, ‘Damnit, I love this!’” 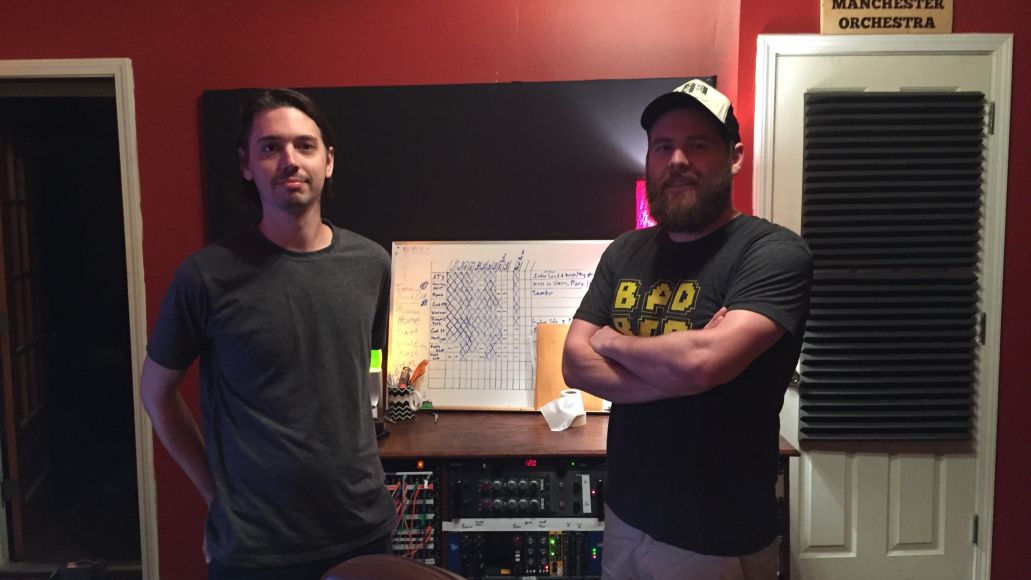 Whether or not Williams approves of their work, Radcliffe certainly does; recently, the actor claimed that the score deserves Academy Award recognition. “It would be the funniest thing ever,” says Hull, “but I’ve learned to never get your hopes up about anything.”

Whether a trip to the Oscars is in the cards, Manchester Orchestra do have more concrete plans: a new album, for starters. “We’re going to do that in September,” Hull says. “Scoring Swiss Army Man influenced us a lot. It was really cool to be able to go do that and now come back and try and make something crazy for our sixth album.”

Manchester Orchestra, Swiss Army Man, and How to Score a Film with a Farting Corpse