Give or take a week, because for some weird reason its sequel isn’t coming out during the long July 4th weekend, it’s been 20 years since Independence Day became a cultural phenomenon — and we’re not saying this lightly. The film achieved that rare kind of ubiquity that select blockbuster films used to enjoy, when going to see a movie on its opening weekend in a theater was an obligatory summer event. The reviews were scattershot, as you’d expect for a loud, 2.5-hour movie about the destruction of much of the modern world at the hands of menacing, tentacular, heavily-shielded aliens. But it hardly mattered. Independence Day was an honest-to-God event.

Having been directed by Roland Emmerich, it sure felt like one. Independence Day follows a series of disparate stories over a few days as aliens position their large spacecraft over every major world city before letting loose with destructive columns of blue light. Meanwhile, Captain Steven Hiller (Will Smith, in the role that truly pushed him over the top into the realm of mega-stardom) has to try to get a deposed alien to the government and himself back to his worried family, David Levinson (Jeff Goldblum) has to get the President (Bill Pullman) to believe that aliens are using military signals against the world, and a host of colorful characters try to rally together to bring down a much larger threat. Also, the advanced alien race invading our world is weak to floppy disk viruses. Again, 1996. 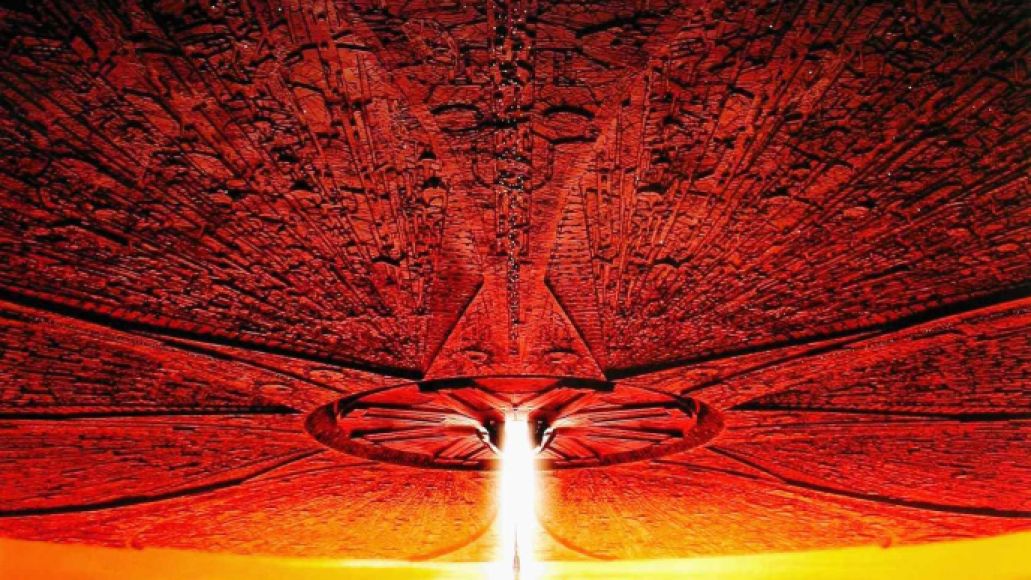 Putting the film into that context is key to understand exactly why it broke out the way it did. After all, the film was the highest grossing of its year and the only film of that year to cross the $300 million domestic mark. (The second highest? Twister. What a time.) Independence Day arrived when film technology was good enough to make something on its scale, but expensive enough that it was still something of a rarity. Its $75 million budget was huge, its heavily promoted destruction set pieces were bigger still, and it came during a year when some of the other heavy-hitting box office smashes included Eddie Murphy’s The Nutty Professor, the Mel Gibson vehicle Ransom, a live-action 101 Dalmatians, and The Birdcage.

At present, the summer spectacle isn’t just something we’re privileged to enjoy maybe two or three times each year. It’s a prerequisite of the season, if anything, but Independence Day was playing on a field that most other films weren’t yet daring — even in a post-T2/Jurassic Park climate where more and more studios were developing the taste for that kind of excessive, trailer-driven money. It was star-heavy, pushed to the moon, and the film’s memorable teaser trailer was playing before every movie Fox could front with it:

Emmerich’s film is also very much a creature of its time not only in its swollen budget and unironically epic scale, but in its approach to the disaster movie. After all, that’s really what it is. Emmerich has long been known for his operatic approach to destruction, from the drowned New York City of The Day After Tomorrow to the global decimation of 2012 to Stonewall. At present, it’s become something of an in-joke in film circles, but in 1996 he ascended to the ranks of the great, marketable mega-budget filmmakers of the time. Independence Day was his crown jewel, his ascension from B-movie material like Universal Soldier and a massive step forward (at least in size) from Stargate. All he had to do was demolish America and redeem it in a couple hours’ time.

Independence Day also came out during a strange time. In recent months, American Crime Story and now ESPN’s superb O.J.: Made in America have recast that infamous trial as an integral turning point in modern American history, and in any case by 1996, popular culture was getting around to addressing the larger national dialogues born out of that lengthy ordeal. For the most part, it was by throwing the nation’s collective arms around diversions, anything that could adequately help Americans forget for a few hours that the whole of the country was sitting on a hotbed of racism, police abuse, legal injustice, and the general sense that things were on the decline. Hollywood movies, by and large, either tried to evade this, or would make the odd ham-handed attempt to bridge the gap. (Just think of Volcano, released a summer later, which ends in a soot-covered child observing that, beneath a volcanic sky, everyone in LA looks the same.) It was a politically and culturally fraught time, and in the middle of it arrived this alien movie about all of America’s most famous landmarks being destroyed by a locust-like species with an acute sense of human irony.

Emmerich has never exactly been known for his political nuance. He attempts to broach the subject in most of his films, but it’s always in broad strokes. Take, for instance, his penchant for casting ersatz American presidents, from Kenneth Welsh’s malevolent Dick Cheney surrogate in The Day After Tomorrow (complete with an ineffectual, unceremoniously offed Dubya equivalent) to Jamie Foxx’s action-star Obama in White House Down. The high point of this thoroughly hokey tendency came in Independence Day, with Pullman as a version of Bill Clinton who’s introduced early on as being far too given to compromise, instead of making a stronger and more authoritative stand. His Thomas J. Whitmore is a decorated pilot, an immovable leader, and in every way the consummate warrior to lead us into alien battle.

The ‘90s were a more politically unstable time than many recall, when so many pop culture touchstones are as innocently homogenous as possible in hindsight. (What kind of culture, after all, could engender something as blissfully oblivious as Full House, for instance?) There was a roiling cultural tension still carrying over into the latter part of the decade, and for film and TV’s semi-meaningful attempts to engage with it in some way, one of the dominant methods was to just try and forget about it. By refusing to acknowledge that difference existed, we could overcome it, or at least force “difference” back to a place where polite society wouldn’t have to stress about it.

For a blockbuster summer movie to then argue that only a united world can truly stand together was an uncommonly bold message. Now, before moving forward, it’s probably valuable to acknowledge here that Independence Day isn’t exactly a misunderstood paragon of political cinema. It’s a distinctly American affair, the rest of the world being laid to waste much like the US, but existing largely off-camera aside from various globe-trotting montages about exchanges of information. The one time you see the Russian Military, they’re in a rainstorm-battered tower, and even the score changes to reflect it. There are more people from other nations seen in the film’s climatic destruction montage than in most of the movie before. Independence Day is predominantly about the US struggle against certain annihilation, and if you forget this at any point, there’ll likely be another prominently displayed American flag within about 30 more seconds. On its own, it’s pretty typical ’90s action movie stuff. Against the climate of the time, one can draw what conclusions they may.

And yet, the film exists at a cross-section of jingoism and idealistic naiveté that renders it a stranger spectacle among its kind. Its staunch militarism was and is distasteful to no shortage of viewers, its domestic centrism read as xenophobic, and its “destroy ‘em all” approach to extraterrestrial contact a far cry from the open-minded bridging of worlds laid out in gentler predecessors like Close Encounters of the Third Kind. It’s a version of wartime as filtered through a director who would go on to impale a horse on an American flag in The Patriot a few years later, so any political implications were probably intended as facile at best. But what time has lent the film is the sense that Independence Day came into being during the final years where a film this staunchly optimistic and (given the subject matter) lighthearted could be made at all.

With the film’s opening shots, which dwarf the plaques on the moon commemorating the US’ 1969 walk, Emmerich frames Independence Day as the definitive good vs. evil standoff. It’s America (and its largely invisible allies) against the tyranny of far-off planets. But in Emmerich’s view, once the saucers dwarf every city on the planet, there are no more political squabbles, no more international conflicts. There’s just a world under siege that has to protect itself, together, for the continued survival of the species.

Consider Pullman’s iconic speech, probably the best-remembered moment of the entire film outside of Will Smith welcoming an alien to Earth with a punch to the face:

The sincere, earnest belief in redemption so key to the wide appeal of Independence Day almost feels quaint two decades later. Much has been written on how so much action filmmaking of the post-9/11 era has reflected a more nightmarish aesthetic, whether it’s the cultural paranoia of the Bourne series or the wall-of-ash aesthetics of so many big-budget films (Batman v Superman is one especially stark recent example) or a doubling-down on the “America vs. all” sentiments of Independence Day, recast with all of the bravado and very little of the idealized social oneness. Superman is no longer Superman; he’s a possible terrorist out to destroy us all. The government is either out to oppress its citizens or the only thing standing between them and vague threats of total annihilation, depending on the franchise property.

The film aspires to more, to a universal ideal that humanity can indeed put aside its differences and rally together. There’s none of the political exhaustion of so much modern spectacle, none of the lingering sense that only godlike (read: “super”) beings can save us now from our basest, most destructive impulses. Mega-budget summer filmmaking fantasizes about triumph less often these days. Our catharsis doesn’t come so much from imagination and hopeful fantasy as it does from violence, from the confirmation that our existential pain has been acknowledged and played out by a movie for a couple hours, and we have accordingly paid $12-$20 or so for it. Independence Day is a fine spectacle of its kind, but its commentaries of any kind are either incidental or painfully of the era — and yet, that speech endures, as does the film. It’s a reminder of a world that was still doing poorly by so many of its own, but could aspire to more. In at least that singular respect, they really don’t make them like that anymore.