Word of mouth goes a long way, but it hasn’t quite been able to articulate everything the brilliant Weaves bring to the table. Maybe that’s the price to pay for a band that’s off on its own planet, crafting its own brand of weird art rock.

This June, the Toronto four-piece turns three years old. Listen to any of their songs and it’s hard to believe they could have written such varied music in such a short span of time. It’s music so original that others fumble to relay its genius, which is why it’s best understood live. Weaves exude a fevered, spastic energy that must be seen to be believed. Luckily, it will only take a matter of months for their debut full-length, Weaves, to expand their tour schedule so most everyone can find out for themselves.

With only a six-song EP, a few singles, and a One Direction cover to their name, Weaves took the underground hubbub of this year’s SXSW by storm. Frontwoman Jasmyn Burke, guitarist Morgan Waters, drummer Spencer Cole, and bassist Zach Bines performed two wildly different sets, both of which highlighted their talents. Indoors at Hole in the Wall, they ricocheted off one another on a cramped stage until Burke eventually walked through the crowd and out onto the street, microphone still in hand. The next day, in a modest outdoor space behind a bar, they let their sound get rougher, each member throwing themselves into the music. Burke once again left the microphone stand and wandered as she pleased, this time climbing a pile of tires and wood next to the stage and standing atop it, a rebellious princess in her tower of no fucks given.

Perhaps no image better captures who Weaves really are: a band defiant and yet in complete control. All four members jerk about with unbridled enthusiasm, wearing paisley button-downs and blue lipstick in a presentation that looks as if they’re calmly lighting themselves on fire. Weaves are the absurdity of art rock with the stiff upper lip of punk, the grandeur of PJ Harvey with the emotional openness of Patti Smith, the energy of a toddler in the body of an abstract sculptor. See them live once, and it won’t be enough.

We’re sitting on a grassy hill in Austin, TX, after the band has wrapped up their final SXSW show. They crack jokes about which person on Friends they would be. There’s an obvious level of comfort, both onstage and off, that other bands spend years trying to achieve. Weaves, though they didn’t grow up together or meet in college, formed that bond right from the start. “A big element playing live is trust, and I feel like they will follow whatever thing we’re on because they’re all talented players,” says Burke. “I love playing with people that understand things can get zany, things might go out of time, but we can meet each other. It’s lucky if you meet people who can do that with you.”

Despite the ferocity of tracks like “Closer” and “One More”, their sets remain relatively non-aggressive. There’s no stress, no restrictions. It allows for each member to let loose and create that explosive, colorful sound without fostering any feelings of anger. And it leaves room for improvisation. “In ‘Motorcycle’, it ramps up and becomes something big, but last night we got quiet and then did a big drum fill,” says Bines.

“And there I was like, ‘I don’t know what’s going to happen, but I’m going to do these exaggerated dance moves,’” says Burke. “Sometimes I honestly don’t even know what they’re going to do. It’s fun.”

“Yeah, if you didn’t have that flair, we couldn’t do what we do,” says Waters. “We’d just be onstage looking like assholes.” 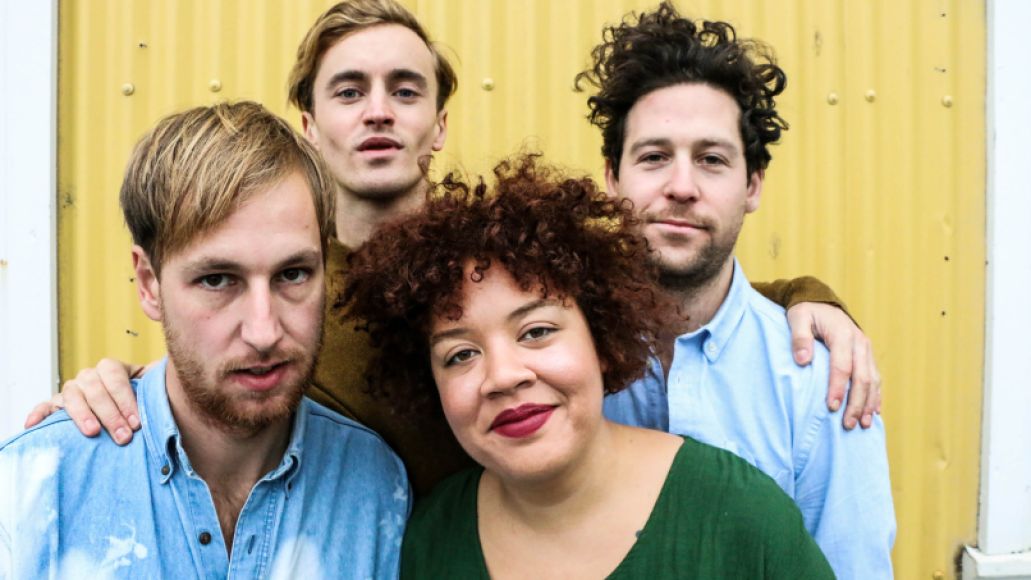 They’re referring, of course, to Burke’s notoriously wild antics. Each song finds her staring audience members down, moving her limbs in slow motion, stretching each action into an over-the-top childlike move. She pushes the audience to open up, tapping into an excitement bubbling just beneath the surface.

“If the show’s going wild and things get weird and you see a little smirk from the crowd, then that’s a green light to get weirder and go there,” she says. “I’m not good at eye contact in real life, but onstage I’m all for it. When I was younger, I used to feel like I’d puke before shows and I couldn’t tune my guitar so my bandmate had to, but then I realized I loved when band members looked at me from the stage. It was like they were speaking to me. People don’t expect that. When you look at them in the eyes, they get taken aback. It’s scary for both of us, but I’m taking the plunge on behalf of them.” She pauses. “There’s something about performing that isn’t to do with you.”

Don’t worry; Burke won’t make you do anything you’re uncomfortable with. Instead, her actions force audience members to ditch the notion that they’re standing behind an invisible wall and watching a flat artwork rather than engaging in a living interaction. Making intense eye contact elevates Weaves’ energy. It lets viewers know that their music, though sporadic, is intentional. “I really admire that about Jasmyn,” says Bines. “I even tried to do it myself once. I told myself at this show that I’d look two people in the eye, and even that was hard.”

Burke works the spotlight to perfection, but the rest of the crew delivers just as much to the band’s sound. Cole’s mad drumming sounds like he’s constantly on the edge of breaking his kit. Bines runs his fingers along the fretboard like it’s a joke, the speed of his walking lines recalling elements of funk and jazz. Even Waters’ subtlest touches on guitar, like the casual use of a slide on “Birds & Bees”, force new themes into standard pop structures. Together, the band members push the comforts of music to their breaking point so that their songs almost become exercises in uncomfortableness. If you can withstand the awkwardness onstage, then you can face the harder stuff later on. You become invincible.

“I can’t play in cover bands because I don’t like to learn other people’s parts,” says Cole. Watching him onstage makes that clear. He’s in his own world. “I’ve been constrained by a lamp and a conductor and a click track before in ensembles. This doesn’t have that.”

A heap of Weaves’ weirdness comes from embracing their own errors. If one person makes a mistake, another makes their own mistake to add to the mess. “We see it as: Oh, you fucked that up? We’re going to fuck it up even harder to make that weakness a strength,” Waters explains. The four are comfortable enough with themselves as players to not let wrong notes or faulty tuning spoil a show. If anything, it challenges them. “You reclaim it for yourself. In that, this band is an exercise in letting go,” says Waters. Burke adds that it takes “a lot of sass” to pull off.

“It’s boring to watch a band that’s perfect live,” says Bines. “You’re like, okay, 100%! You totally nailed it! As an onlooker, that can be boring. It’s about the singer, not the song.” 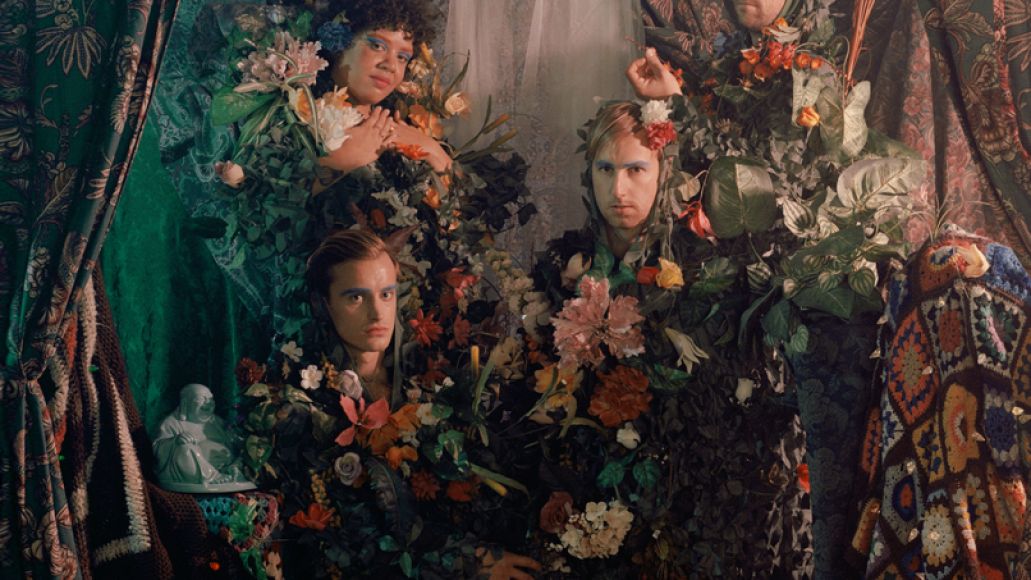 The band’s methods may be unconventional, but they work. One of my friends from middle school, Jessica, attended that final SXSW set with me. She’s open-minded and kind but really couldn’t care less about music — we’re talking about a woman who last purchased an album in high school. The moment Weaves wrap up our interview, I look at my phone and see a text from Jessica. “I can’t stop listening to Weaves,” it reads. “I just bought their EP. Is there anything else? Help. I want more!” Now, at last, there finally is.

Five recording sessions over the course of a year have resulted in an impressive debut album. Weaves blends newer recordings like “Two Oceans” and “One More” with older tracks like “Candy”. More importantly, it makes the band’s sound even harder to peg. There are gritty tones in “Tick” and “Shithole”, but there are also soft ballads like “Stress”. The elastic bass and twinkling guitar line on “Coo Coo” and “Sentence” even recall Vampire Weekend.

“We wanted to get it right,” Burke explains when asked why it took so long for an LP to surface. “I think if it came out earlier, then we wouldn’t have been happy with it. People should be okay with waiting for bands to make a record. Everyone wants you to have a record out within a year, but maybe you’re not ready.”

It’s important to keep that in mind. The bizarre creativity that pours from Weaves is still hot to the touch. Burke was ready to quit music back in 2009 and booked two solo shows as a farewell to her music career. “I was done with bands and thought I’d get a real job,” she explains, “but I was getting the itch to play.” Waters attended the final show and introduced himself to her after. The duo later roped in Cole, and Cole then enlisted Bines from their days playing in a punk band. “Zach thought he had tendinitis,” Waters laughs. “It’s kinda funny; we formed at a point in time when each person was on the brink of giving up.”

Each member learned music early on, but they push themselves in Weaves to create something outside the lines of pretty much every genre. Their roads meet in the sense that they all ditched traditional paths long ago. Calling it luck seems to minimize the wealth of talent they each bring to the table, but it sure feels like fate that they found one another when they did. 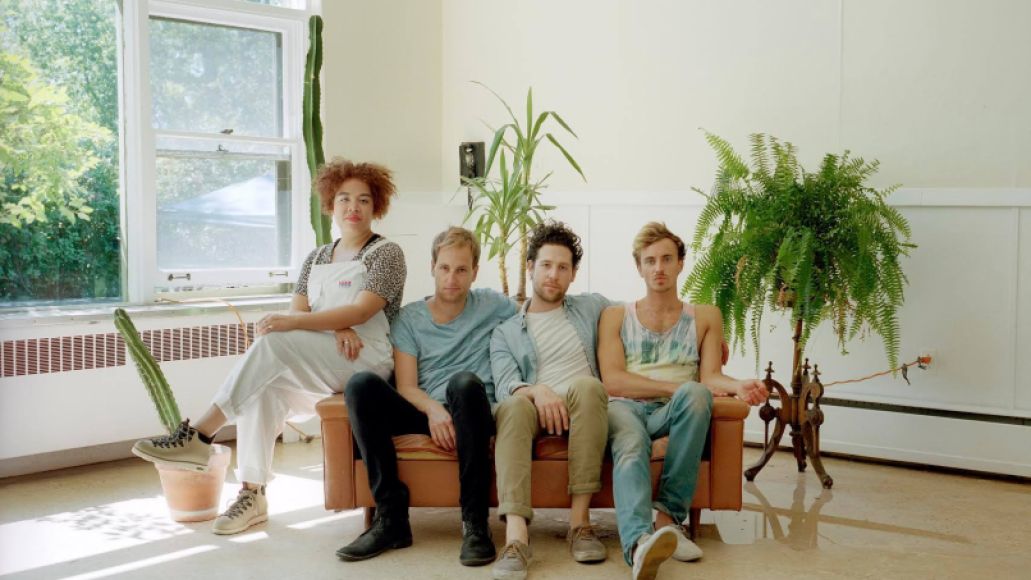 “In your first year, you don’t even know what you want your band to be,” explains Burke. “A fun thing in the future is that I know what Weaves is. I’m proud of our dynamic, that we can go berserk onstage but then crack jokes in the car on our tours and still be friends. That’s hard, but not for us, you know? Keeping it healthy, fresh, and fun.”

“If only that was our motto,” Bines laughs.

The Wonderful World of Weaves: How One Band Is Keeping Art Rock Weird