Ever wonder which movies inspire your favorite bands or how filmmakers work with artists to compile your favorite soundtracks? Sound to Screen is a regular feature that explores where film and music intersect. This week, Gone Is Gone members Tony Hajjar (At the Drive-In) and Mike Zarin talk about the secret world of scoring film trailers and how it led them to their new rock “supergroup.”

Last month, life surprised Tony Hajjar with the chance to experience every musician’s worst nightmare. Standing on stage at New York City’s Terminal 5 and looking like a well-dressed deer in headlights, the At the Drive-In drummer broke the news that frontman Cedric Bixler-Zavala had lost his voice and the band would be forced to cancel their highly anticipated reunion show. “That was fun,” he deadpans, remembering the jeers and insults he received as compensation for the news.

Moments like these make Hajjar remember why he first quit touring years ago. The problem back then was that he hadn’t the faintest idea about what to do instead. He knew he wanted to compose and perform music for a living, but he didn’t want the grind (and, yes, the occasional fan backlash) that comes with touring full-time. Enter composer Mike Zarin, who introduced Hajjar to a new world he never even knew existed: the secret world of scoring film trailers. That’s right. Not films. Film trailers.

“To be honest, at that point in my life I had no idea there was music composed specifically for trailers,” he admits. Zarin, who has composed music for so many film trailers that he’s actually lost count, says that’s a pretty common reaction people have to his work. “Like most people, I didn’t even know it existed until I got a job at a music production company,” he says. “It’s this world that bridges the film world and the record world. I think that’s what pulled me in.”

Hajjar and Zarin hit it off, and they soon began a productive career of scoring trailers together. Chances are, you’ve heard their work but just haven’t known it was them. The duo’s first collaboration was the initial teaser trailer for Quentin Tarantino’s Inglourious Basterds. You can tell it’s them because it’s heavy as fuck — the perfect soundtrack for killin’ Nazis.

But listen closely to that teaser, and you’ll hear more than Nazi-killin’ music. You’ll hear the very beginning of Gone Is Gone, the heavy metal group that Hajjar and Zarin have formed alongside Queens of the Stone Age guitarist Troy Van Leeuwen and Mastodon bassist and vocalist Troy Sanders. The worst thing you can do, in Zarin’s eyes, would be to mistake Gone Is Gone for a supergroup (“Nobody knows who I am, so there’s no reason you should call it a supergroup,” he jokes). Instead, it’s best to look at the group as a logical extension of Hajjar and Zarin’s trailer work together. This isn’t your normal, run-of-the-mill cash grab. In fact, it’s something a hell of a lot more interesting.

That’s because nothing like Gone Is Gone has really existed before. “I think the goal of the band since conception was the word ‘hybrid,’” explains Hajjar. “We have ideas of being a band that can go play a festival and can go score a film.” So, uh, to everyone calling Gone Is Gone a supergroup (and yes, that includes us), maybe it’s time to really listen to what these guys are all about.

The best way to do that is to head back to the early days of Hajjar and Zarin’s collaborations, when they were still experimenting with different ways to translate traditional rock dynamics to the more rigid structure of a one-minute teaser or three-minute trailer. “I think when I got into it with Mike, everything we did was bombastic and hit-you-in-the-face and loud and aggressive,” says Hajjar.

Their own sound has since evolved, but they still work in much the same way. A big part of their job involves recording albums of music meant to be used specifically for film trailers. “Most people don’t realize 95% of music in trailers is all pre-recorded,” Zarin notes. “That’s what Tony and I were up to for so many years, recording these albums of instrumental music designed for trailers.” When one of those instrumentals gets picked up, it tends to spread like wildfire, appearing in trailer after trailer until both Hajjar and Zarin eventually lose track.

One good example of this is “Fallen Shadows”, an instrumental track that became so widely used that the duo was asked to write four different versions of it. Zarin prefers the version that popped up in the trailer for Spike Lee’s 2013 remake of Oldboy:

Though you might prefer this abbreviated version, which appeared in a TV spot for 2012’s The Amazing Spider-Man:

Most composers would be pretty proud of getting their work featured prominently on TV, but Zarin and Hajjar have to dig up notes to even remember where their music has been featured. “We had one of our songs in a Selma TV spot,” remembers Zarin, “and I was like, ‘Oh, I didn’t even know about that! Sweet!” Their nonchalant approach to what many musicians would consider a braggable accomplishment is revealing. Sure, it’s cool to have your music pop up in who knows how many different places, but Hajjar and Zarin have always had bigger goals than that.

They seem to prefer the challenge of working on custom scores, whether for trailers, short films, or even video games. One of the most ambitious projects they’ve ever worked on together is the soundtrack to Splinter Cell: Blacklist, a stealth video game whose music required three months of almost non-stop work to complete. The length and scope of that particular project — not to mention, the sheer number of hours they had to sit in the studio next to each other — convinced the duo that they might be able to do exciting things with a full band. 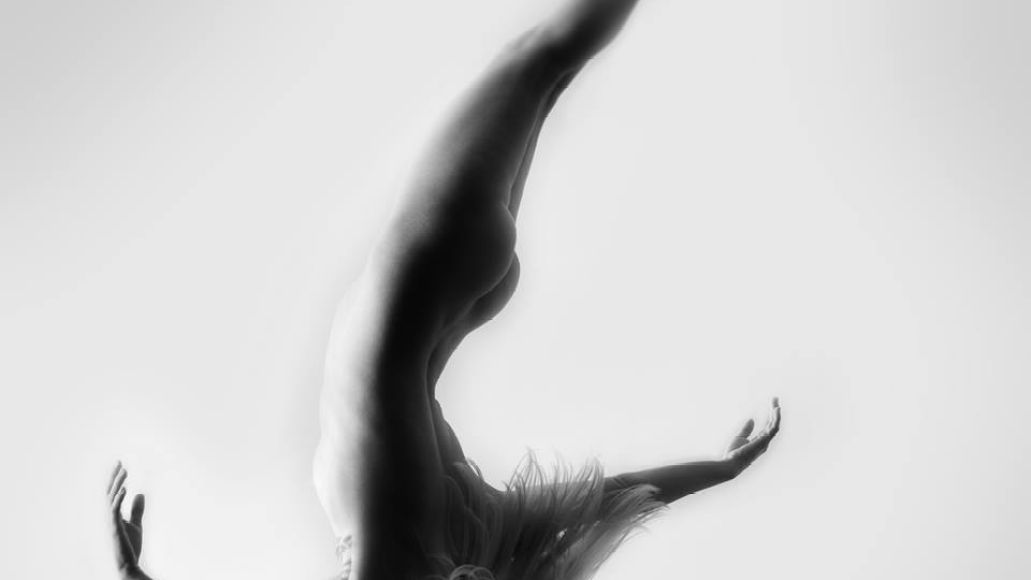 That thought became a reality when they brought in Van Leeuwen to track guitars for a custom trailer they had been working on. That music never made it into the film, but it did serve as the seed for one of the best tracks on the new Gone Is Gone record, “Praying from the Danger”. Lots of bands describe their sound as “cinematic,” but how many of them can actually say their songs were originally written for movies?

“The whole reason I am in this band — and the reason my partnership with Tony has led to this band — is that we both come from a very visual standpoint,” explains Zarin. “We want to create a visual and visceral experience. It’s not just four guys rocking out. Every song we write, every note we play, is written with some sort of visual in mind.”

The aesthetic of Gone Is Gone’s debut music video for “Violescent”, which depicts a succession of naked women stranded in time and space, is our first clue as to the kinds of visuals the band will be exploring. The new EP artwork features a similar aesthetic, which seems to underscore the fact that Gone Is Gone want a distinctive and definable visual experience to go along with their records. Even so, Zarin speaks as if this is only the beginning. The plan is to use this EP as a jumping-off point for visual/sonic projects the band can’t quite talk about just yet, in all likelihood because even they don’t know what’s going to happen.

One thing Hajjar and Zarin do know: They want nothing to do with the term “supergroup” and the ulterior motives it implies. “This isn’t just us writing to get a crowd moving,” says Zarin. “It’s sure as hell not us writing to sell records or capitalize on a conglomerated fanbase. It’s us writing to create … something.” Whatever that something becomes, perhaps it’s best to look at Gone Is Gone’s debut EP as a harbinger of what’s to come. You might even call it a trailer.