Recently, Justin Bieber threw a fit because an audience member disrupted his set and took him out of his “zone” of artistic concentration. It’s kind of funny that he’d be such a stickler for this sort of thing, considering he’s spent a good chunk of the year disrespecting other artists. In March, he performed a slew of shows that likely made Kurt Cobain spin in his grave; he also may have slighted Prince just hours after his death.

For his latest stunt, the pop singer has been passing off a black, sleeveless Marilyn Manson t-shirt as his own line of tour merchandise. Which is silly, seeing as how the t-shirt’s front image is identical to that of one available at Hot Topic for less than $17. (I’m assuming that Manson hasn’t given Biebs permission to do this. Correct me if I’m wrong, Marilyn). Meanwhile, its back graphics, supposedly meant to seem badass, read “Bigger Than Satan … Bieber.” Sure, okay.

This hot mess of a garment will set you back a hefty $195 — yes, you read that right — and is being sold at luxury retailer Barneys, because that’s totally where bands do business these days. Ripping off other artists and bleeding fans’ wallets dry are lame things to do, but then again this week’s been all about a pop star being caught in a web of lies and a presidential campaign that blatantly plagiarizes. Go, America!

Update: Manson supposedly gave Bieber and the t-shirt’s designer Fear of God permission to “reinterpret” the original image, according to an Instagram posted 30 minutes ago from Fear of God’s Jerry Lorenzo. Biebs has got friends everywhere apparently. Thanks to one of our nice readers for the tip. 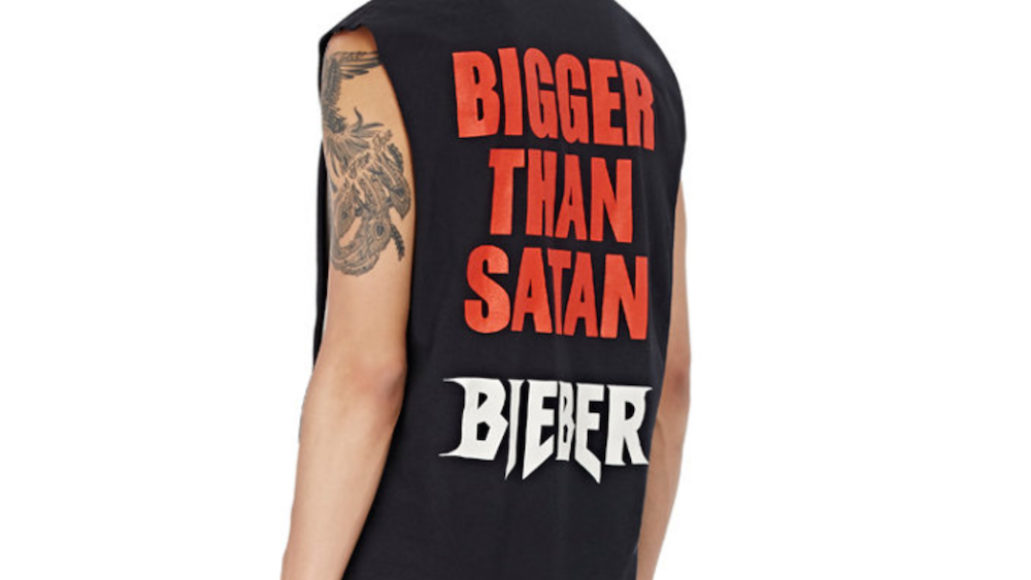