Guns N’ Roses couldn’t have picked a better Chicago venue for their reunion show. The nearly 100-year-old Soldier Field has been the home of the Chicago Bears for 45 years, and at least half of that football tenure has featured the rock ‘n’ roll anthems of one Axl Rose. Think about it: How many times have die-hard, Ditka-abiding Chicagoans rooted for their boys in blue as “Welcome to the Jungle”, “Paradise City”, or “Sweet Child O’ Mine” thundered from the PA above?

So, on Friday night, over 60,000 fans returned to their highly coveted coliseum to see their proverbial cheerleaders in the flesh. As a cool summer breeze rolled in from Lake Michigan, a curious reprieve from the week’s balmy weather, a surprising, if not pleasant, scene unfolded at Soldier Field. Vibrant, intoxicated metal heads, ranging from 55 to 32 to 17, actually managed to co-exist in harmony as they strut around in #GnFnR gear, totally oblivious to the ever-sacred Band Shirt Rule.

Or maybe they just didn’t care. Why should they? This was their rock ‘n’ roll dream: the “Not In This Lifetime” reunion of Rose, Slash, and Duff McKagan. Veteran fans have wanted some form of this lineup for decades, especially those who waded through the years of rotating guitarists, everyone from Buckethead to Ron “Bumblefoot” Thal to DJ Ashba. The youngsters, those who’ve only ever owned torrents of Appetite for Destruction, probably thought it’d never happen.

Until Friday, that obsession was relegated solely to CDs, vinyls, bootlegs, DVDs, and bookmarked YouTube clips, most of which have gone untouched for the better half of a decade. (Though, if I’m being honest, there isn’t a morning jog that goes by without something off of Use Your Illusion I and II.) Bottom line: I was much too young to ever catch them during their golden years and far too apathetic to ever attend one of their pre- and post-Chinese Democracy jaunts.

Now, before you hit up the comments and rip me apart, know that I happen to thoroughly enjoy Chinese Democracy. It’s an excessive album, sure, but tracks like “Better”, “There Was A Time”, “The Catcher in the Rye”, and “Street of Dreams” are worthy additions to the Guns N’ Roses canon. Having said that, I’ve never been able to fully embrace any of the replacements, even if one of them actually was a Replacement, aka the greatest band of all time. Okay, end sidebar.

Well, as promised, the unthinkable did happen and 15 minutes earlier than scheduled, which is a far cry from the dizzying days when Rose would rather catch a flick than hit the stage. Less than 35 minutes after Alice in Chains finished their commendable opening set — the transition from moody ’90s alternative into ’80s heavy metal proving how ubiquitous the would-be varying rock genres have always been to fans — Guns N’ Roses stomped out to the sounds of “It’s So Easy”. 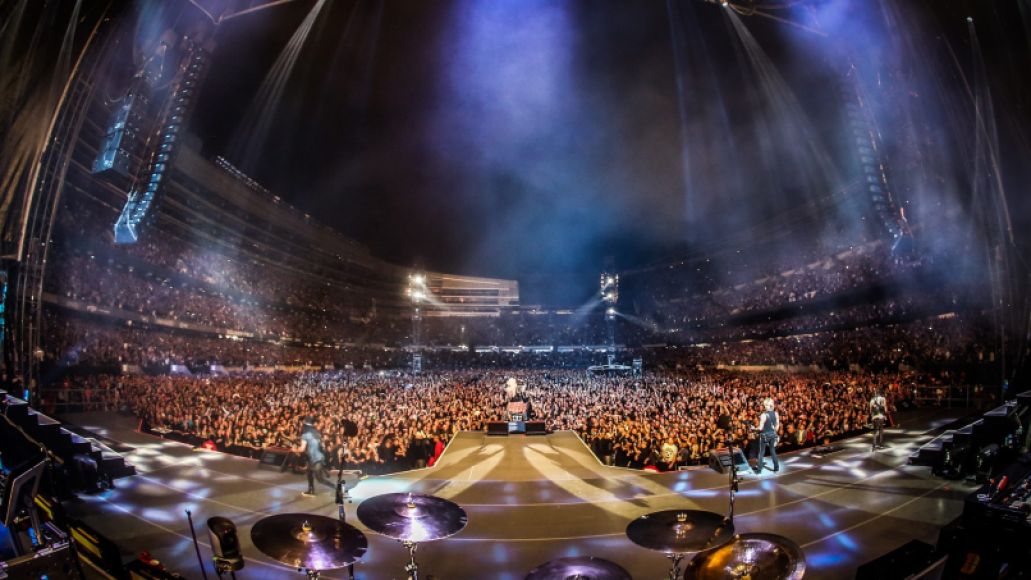 It was all lights, cameras, explosions as Rose, Slash, and McKagan lead the formidable crew of rhythm guitarist Richard Fortus, keyboardists Dizzy Reed and Melissa Reese, and drumming tank Frank Ferrer. Together, they sprinted off early as “Mr. Brownstone” turned into a communal boogie, “Welcome to the Jungle” brought the chaos, “Double Talkin’ Jive” and “Estranged” hinted at further deep cuts, and their Wings cover of “Live and Let Die” borrowed Macca’s fireworks.

There’s been plenty of chatter about Rose’s physicality — to be fair, the embarrassing plea to Google wasn’t exactly a favorable moment, nor was that broken leg of his  — but damn if he isn’t still a showman. Although he was huffing and puffing, and those jammy interludes involving McKagan or Slash were transparent water breaks, the notoriously reclusive frontman was quite omnipresent. Now that he’s out of the leg brace, he can shimmy, he can dance, and he can prowl.

Sadly, he didn’t ask his bandmates to “gimme some reggae”, which would have been such an indelible, self-aware moment, but his catalogue of wardrobe changes were sufficient enough. For close to three hours, he went through at least five shirts, maybe even more, in addition to an assortment of cowboy hats, shades, and gregarious jackets, all seemingly stolen from the Village People circa 1979. Hell, he even had little GNR ear buds; it was kind of endearing.

Naturally, the other man of the hour(s) was Slash. The legendary guitarist has frequently been dubbed The Greatest by critics all over the world, and watching him return to his roots was extraordinary, to say the least. As expected, he kept mum throughout, letting his four- to seven-minute solos do all the talking, as he offered up all of his iconic Les Paul poses to the adoring Instagram accounts snapping below. The double neck guitars were a classic touch, too.

What was most intriguing to watch, however, was how Slash handled any material off of Chinese Democracy. Maybe he’s just a great stage actor, but the axeman really seemed to dig the stuff, especially the title track and “Better”. It’s unfortunate they chose to drag out a snoozer like “This I Love” over more enduring fare like “There Was a Time”, but, then again, they didn’t really need another sprawling number considering they dusted off both “Estranged” and “Coma”.

Of course, let’s not forget about McKagan. The band’s veteran bassist, whose certainly aged the best out of the bunch, rallied across the stage with a youthful swagger, remarkably similar to the chummy Tommy Stinson before him. His smiles were contagious, but his harmonies were essential, marrying Reese’s own to provide a sturdy wall for Rose to lean upon. McKagan snagged the spotlight early in the night with “Rocket Queen”, “You Could Be Mine”, and a couple of ’70s covers. 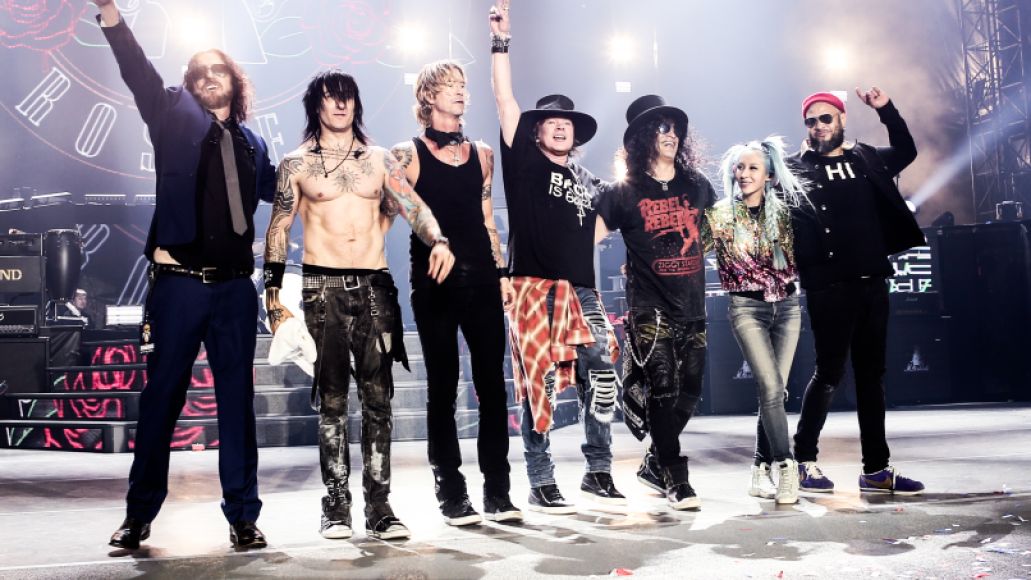 Together, the three appeared less united and more in sync, if that makes any sense. In other words, Rose, Slash, and McKagan came to work and work they did. Outside of a few band introductions, and a closing bow, there was zero indication that they’re a bunch of brothers in arms. Those days are long behind them, if they ever existed to begin with, and that’s not exactly a bad thing. That they were able to make this spectacle happen at all is a miracle in itself.

And make no mistake, it is a spectacle. That’s always been Guns N’ Roses’ forte — seriously, all you have to do is revisit their music videos for proof of that — and decades later, that’s a game they still know how to win. This summer tour is a big-budgeted blockbuster that chews on every penny, from the dazzling, state-of-the-art video accompaniments to the glut of pyro to the grand piano that pops up on stage at the end for “November Rain” and “Knockin’ on Heaven’s Door”.

But, you know what? Good for them and good for us. Rock fans have been starving for a rollercoaster like this and while it’s hardly the drunken nightmares of yesteryear, it’s a feel-good stomper, the type of sleazy, fuck-all escape that comes from listening to Guns N’ Roses in the first place. So, when the band closed the night out with “Paradise City” and all the confetti went everywhere and people were jumping up and down and the stadium just went nuts, there was nothing left to say.