Honey, we’re not in Kansas anymore. Looking around the grounds of Splendour in the Grass, there was no denying where you were. There was the Miss Saigon karaoke, the Moroccan bar, a tipi forest, a German sausage stand, a taco bar, and a Thai massage place, symbols of the influences and inspirations that have fed into the melange of Australian culture. 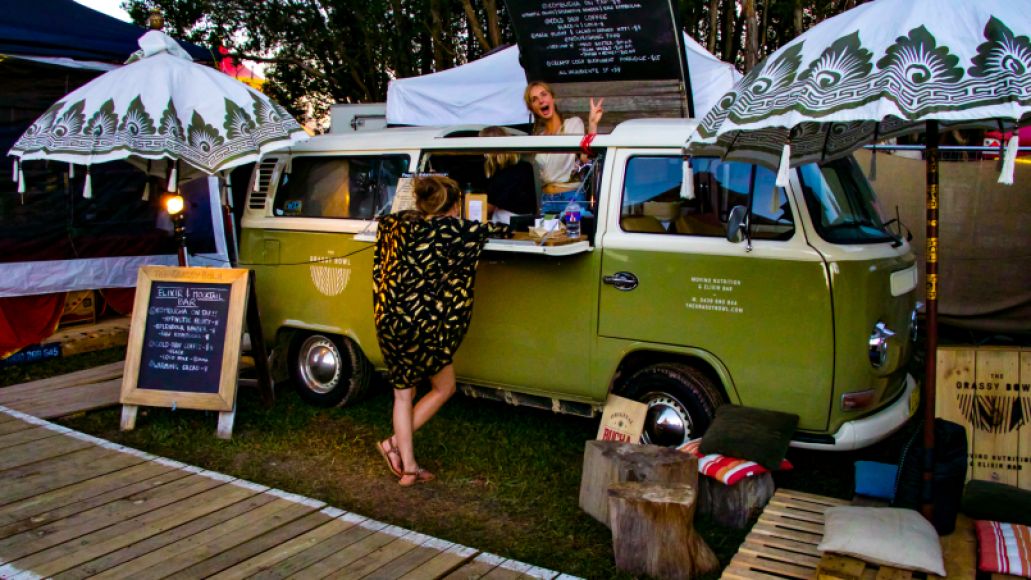 Granted, the country takes quite some time to get to from most of the world, but the indomitable spirit of the people brought all these various cultural touchstones under their umbrella. That extended to the lineup as Australian artists received the devoted reaction of returning heroes. 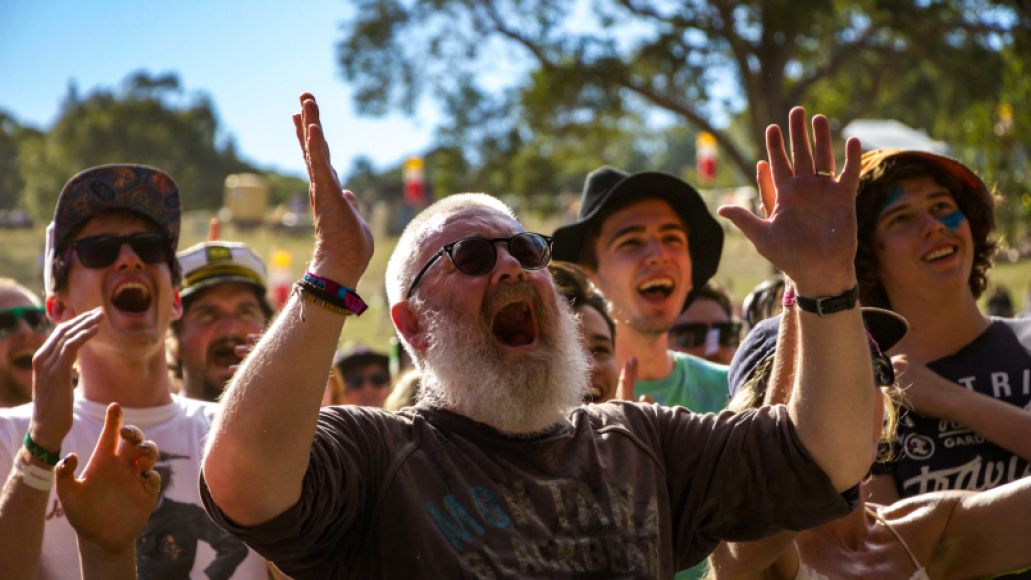 Rather than the massive waving flags from the various nations in attendance (the kind of thing you’d see at any European festival), there were scores of fit, healthy, and attractive Aussies. The beachside town of Byron Bay bred a particular hippie strain as well, complete with tanned surfers, drum circles, hula hoopers, and many a bare-naked body. 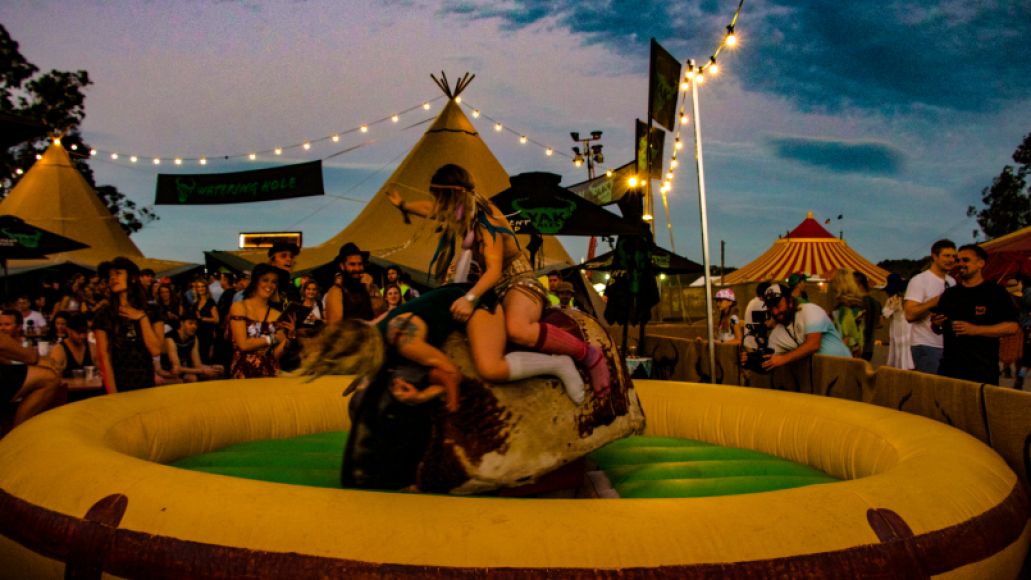 There was an undeniable glow to the entire weekend, evident from the surprisingly boiling winter weather during the afternoon all the way through to the beaming smiles of the fans. Even for a few days, it was nice to stomp down yellow dust roads and drench my curiosity in a hefty dose of Australian spirit. 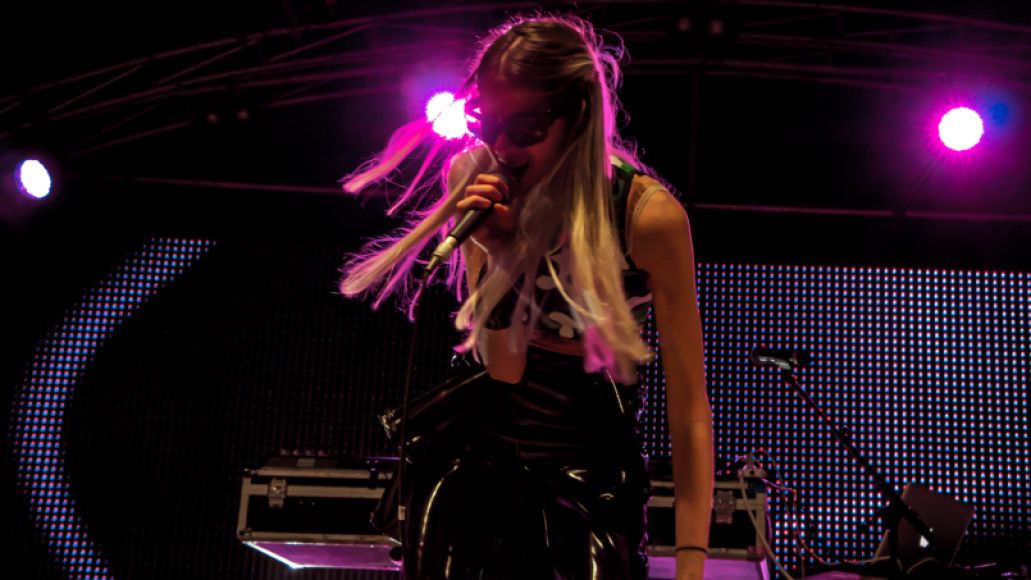 There was plenty of buzz in the air for Melbourne’s own Martha Brown, aka Banoffee, and sure enough, she felt all the local love, too. “I’m sure you’ve all come here with your best friend,” she said, mid-nod. “My best friend is in the audience, so go say hi if you can.” While I never made it to say hello to her BFF, Banoffee started to feel like a close friend by the set’s end. Her indie R&B pop thrills were the perfect complement to a cool Saturday afternoon, Brown tweaking her electronics and wringing her mercurial stage presence through the entire emotional gamut. 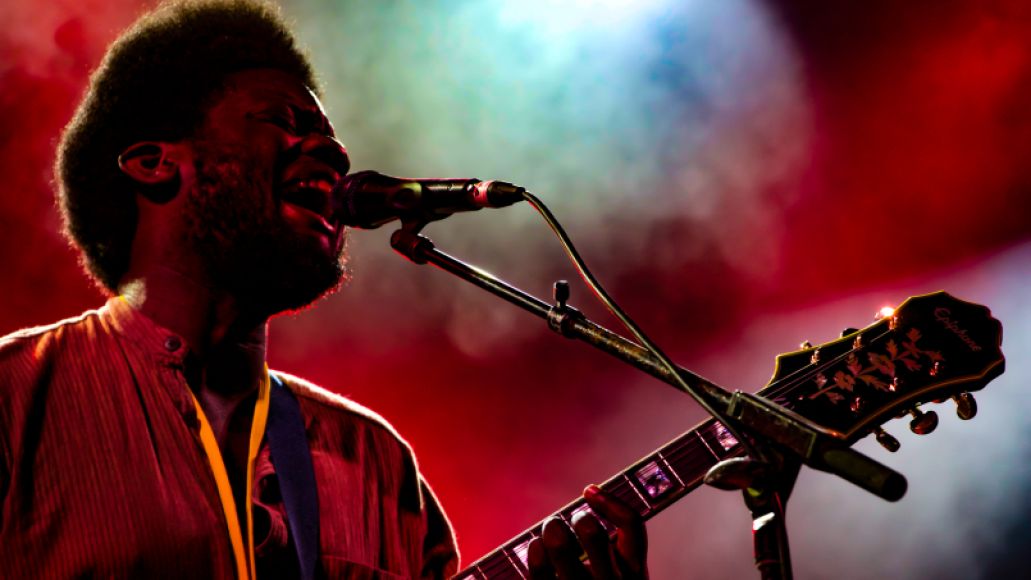 A little thing like not having any instruments couldn’t keep British soul singer Michael Kiwanuka down. “Heathrow Airport is a mess at the moment,” he shrugged, more bemused by the situation than frustrated. “All of our equipment didn’t make it, so we had to borrow. Just bear with us.” However, once he and his band broke into powerful songs like “Black Man in a White World” and others from July’s Love & Hate, it was hard to consider any equipment being involved at all, the songs instead pouring straight out of his heart.

18. In Loving Memory of Szymon 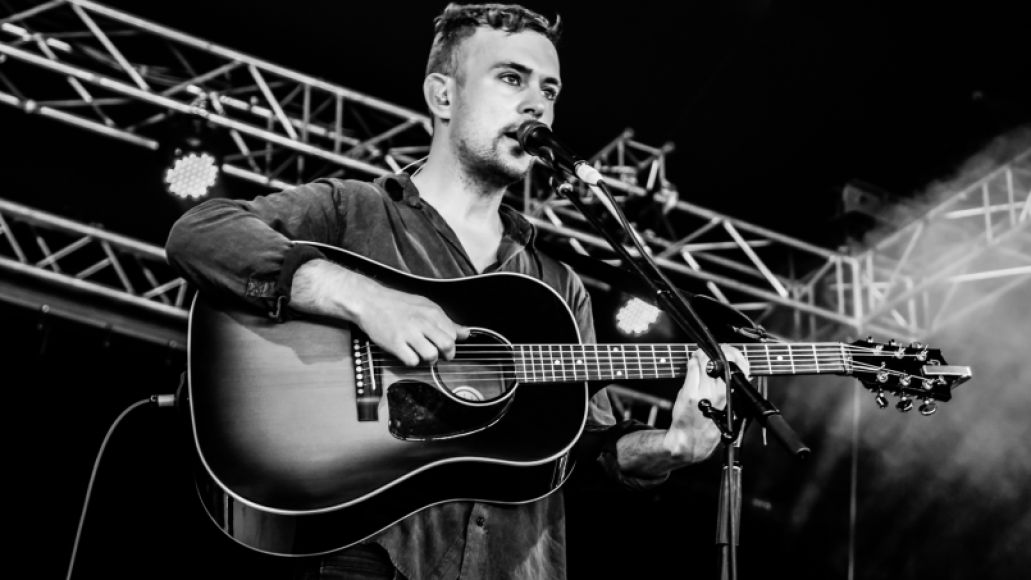 Tragically, Australian singer-songwriter Szymon took his own life in 2012 at the young age of 23, after a few years struggling with depression. Only three years after his death did the beautiful Tigersapp find international release, bringing the world closer to the songs that leapt from his soul. A tribute band was formed to further celebrate his life and art, and while festival sets usually jump to the big and bombastic, their performance at Splendour in the Grass was one of the most heartfelt I’ve seen. Featuring guest appearances from members of Gang of Youths, Ball Park Music, Little May, and more, the crowd huddled together, swaying in harmony as if all minds, hearts, and bodies desired to be connected — both those in the crowd and on the stage. A moment unlike any I’d seen at a festival, and a touching tribute to a musician lost too soon. 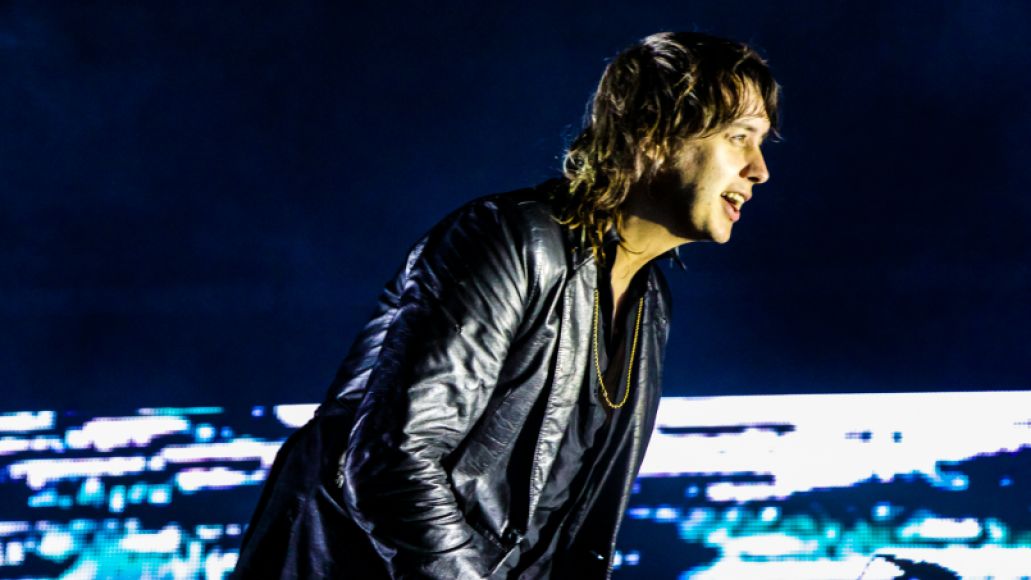 The Strokes are one of the only headliners in this godforsaken world that crowds will allow for a late start. They’re also the kind of rare animal that can get away with awkward banter and a lack of connection. (“So, festivals eh?” Julian Casablancas offered at one point.) But when you’ve got the catalog that the classic New York garage rockers have, the ability to run through “12:51”, “Reptilia”, and “Is This It” with barely a split second to take a breath, any extra-personable banter or timeliness comes as icing on a very soggy, possibly undercooked cake. The massive crowd heaved and screamed through every song, even keeping the energy up for “Drag Queen” and “Threat of Joy” off this year’s new EP, Future Present Past. It all ended as it needed to, with a massive party along to “Last Nite”, the crowd bursting before they had to suffer their way home in the long cold night. 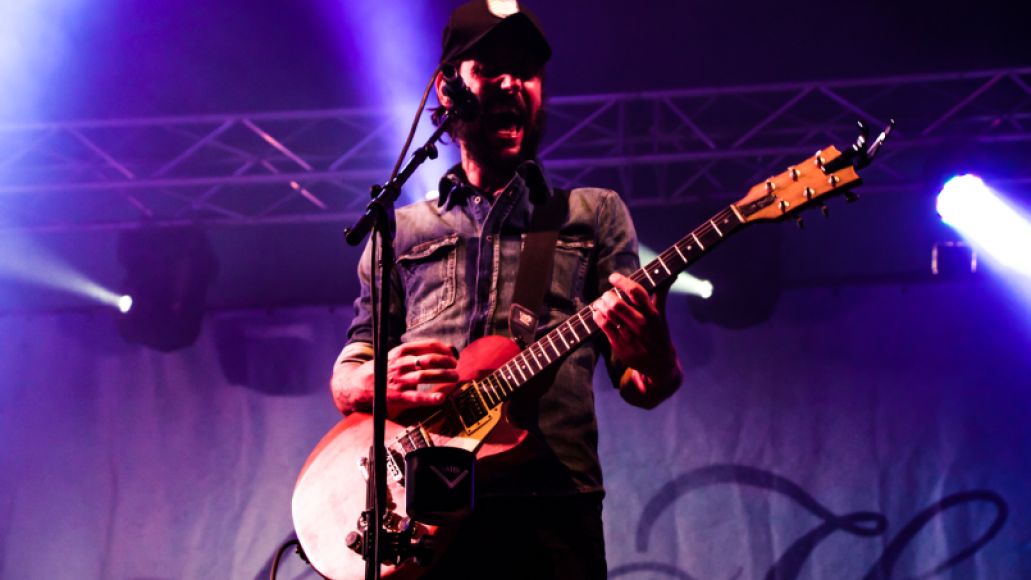 “Thanks so much y’all! Shit!” smiled Ben Bridwell, proving that you can take the boy out of the country, but you can’t take the country out of the boy. The Band of Horses vocalist brought his South Carolina charm in equal dose with the doughty indie rock. Those two factors coalesced most sweetly on tunes like “Laredo” and “The Great Salt Lake”, the band climbing massive heights with unbridled energy. Ever the celebratory type, Bridwell made sure to congratulate Splendour on its 16th birthday and continue to keep the party atmosphere going, even when the heartfelt songs demanded tears splashing all over the show. 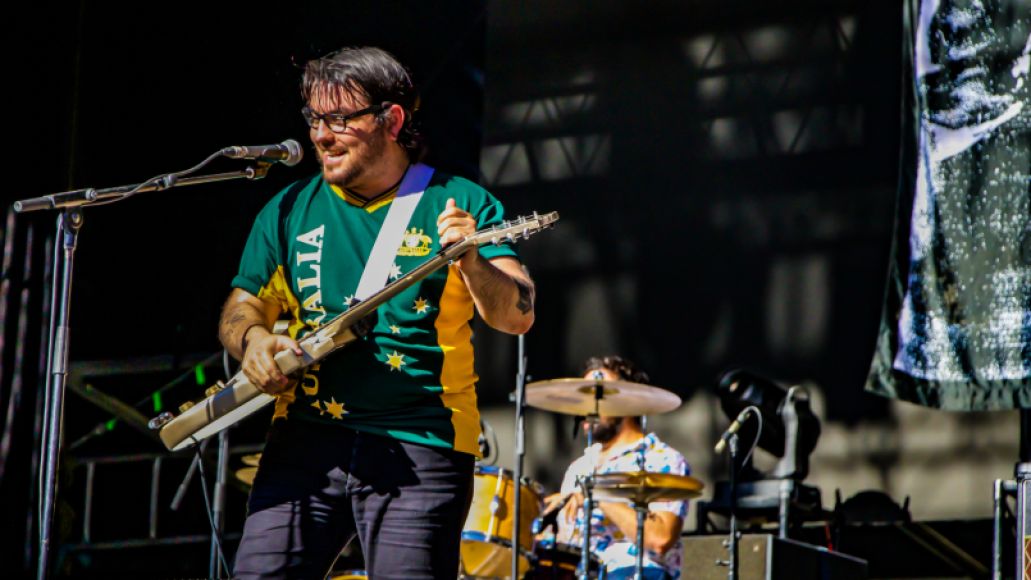 “Rock and roll deserves to be drunk messy and fucked up!” Beach Slang’s James Alex explained. “And we want to be the torchbearers.” After seeing their Splendour set, it’s hard to imagine better representatives, the Philadelphia quartet bringing their heartland indie punk to the masses. As if to further ingratiate themselves with the locals, guitarist Ruben Gallego wore an Australian sports jersey. The crowd dug it, the dust from their moshing and the baking sun rising toward the sky. Alex (the self-professed love-child of Marc Bolan, Brian Jones, and Harry Potter) led the way, equal parts rocking sincerity and sincere rocking. 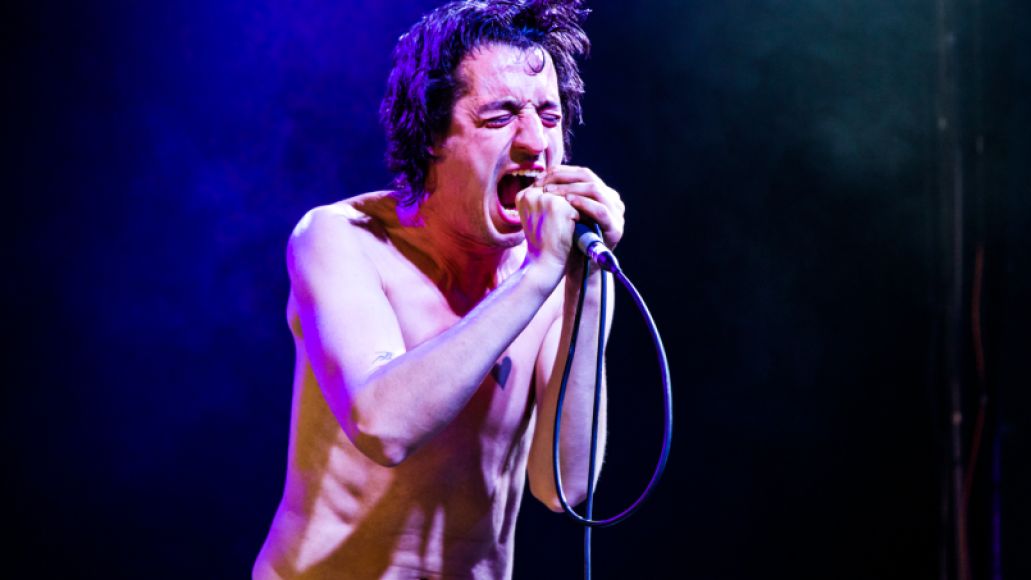 Goddammit Lias Kaci Saoudi must not like his clothes, huh. By the end of his band’s set, the Fat White Family frontman had fully disrobed, continuing to lead the way on the London sextet’s gritty post-punk tunes with everything hanging out — his junk laying on the stage like roadkill. At least he checked his prostate health while he was at it, making the sandwiches thrown into the audience earlier in the set seeming pretty tame by comparison. Lest you believe that their set relied exclusively on antics, the Family also tore through songs from this year’s Songs for Our Mothers with surprising cohesion considering their chaotic predilections. Fat White Family may not be for the faint of heart, but those who either miss GG Allin or love sharp-edged jams stuck around for their … err … stripped down antics.

13. King Gizzard and The Lizard Wizard 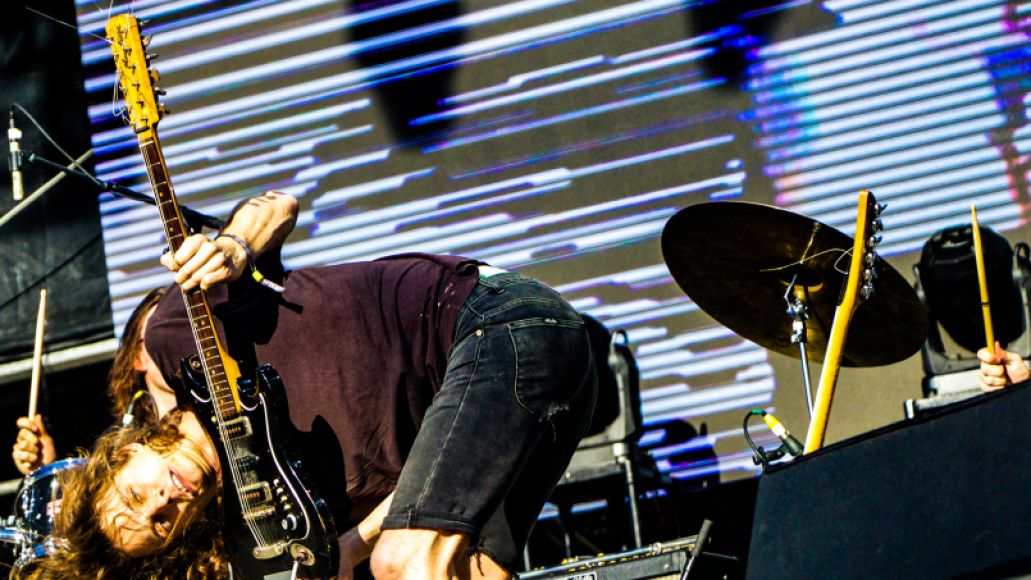 King Gizzard and the Lizard Wizard are the type of band that have played enough frenetic psych rock sets to go so wild that it seems they don’t even know that anyone else exists. They’re so locked into the energy that each musician seems to be in their own world, attuned to some mystic power. And then their songs shift on a dime, a feat of musical unity that shows just how interconnected Ambrose Kenny Smith and co. have become over years of incessant touring. Touring on the back of Nonagon Infinity, the Melbourne outfit’s set looped and linked, collapsing in on itself in a psychedelic fit. 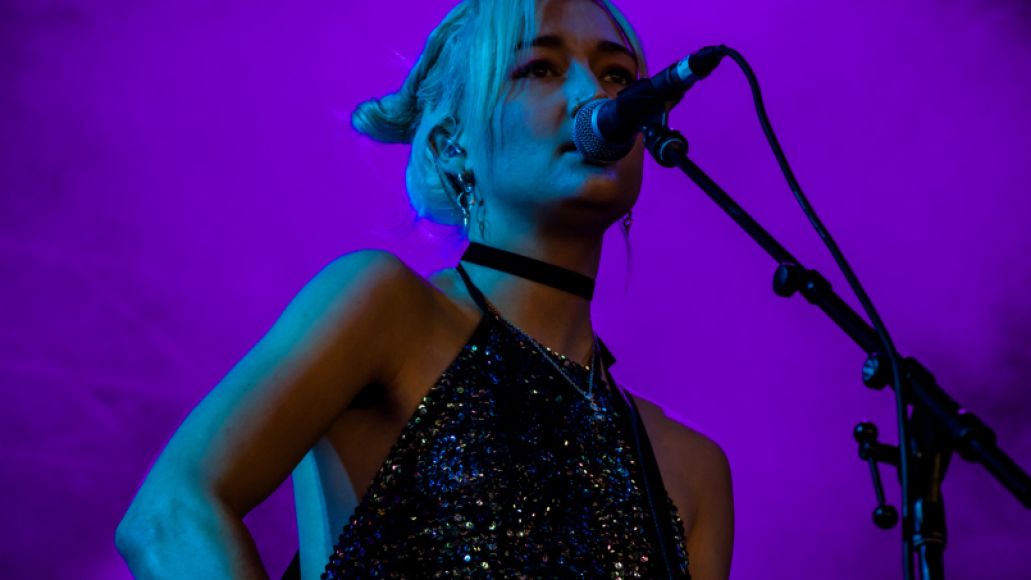 Little May’s brand of indie rock and folk has built a steadily growing fanbase, particularly in their hometown of Sydney and Australia in general, but expanding throughout the world rapidly. Their stature somewhat the opposite of which their name suggests. They’re doing that meticulously, too, making sure every element of their music works together. And, as if their well-drawn formula for nearly universal musical appeal weren’t enough, they craft their sets with enough majesty and arc to fit into a Hollywood mega-smash. “We’re quite nerdy when it comes to our setlist,” they shrugged. And the soft sweetness with which it was said belies their quiet charm, but also the leaps and bounds that Little May can make once they gain more confidence and experience. 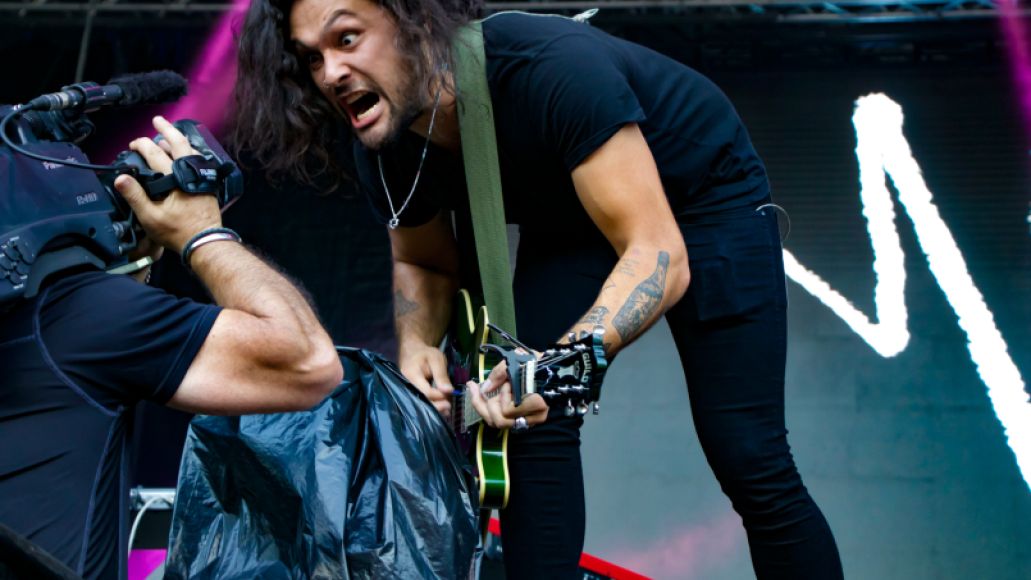 Throughout the years, I’d seen underpants thrown on stage in plenty of TV and film parodies of concerts, but I’d never seen it done in person — at least not until Gang of Youths‘ set at the Amphi stage. But then the Sydney indie rockers were in the mood for a little celebrating, David Le’aupepe putting the undergarments on his head and acting like an ersatz crooner, fitting their slinky rhythms and sensual energy. Their brand of indie rock fits into the poppy, palatable realm of Foals and Coldplay, but that doesn’t mean they were there to play it calm and safe. (Guitarist Jung Kim’s wobbly shout about being too drunk made that clear.) The combined raw energy and people-pleasing grooves made Gang of Youth’s set another in a crowd of Australian favorites.

Splendour in the Grass 2016 Festival Review: The Top 20 Performances